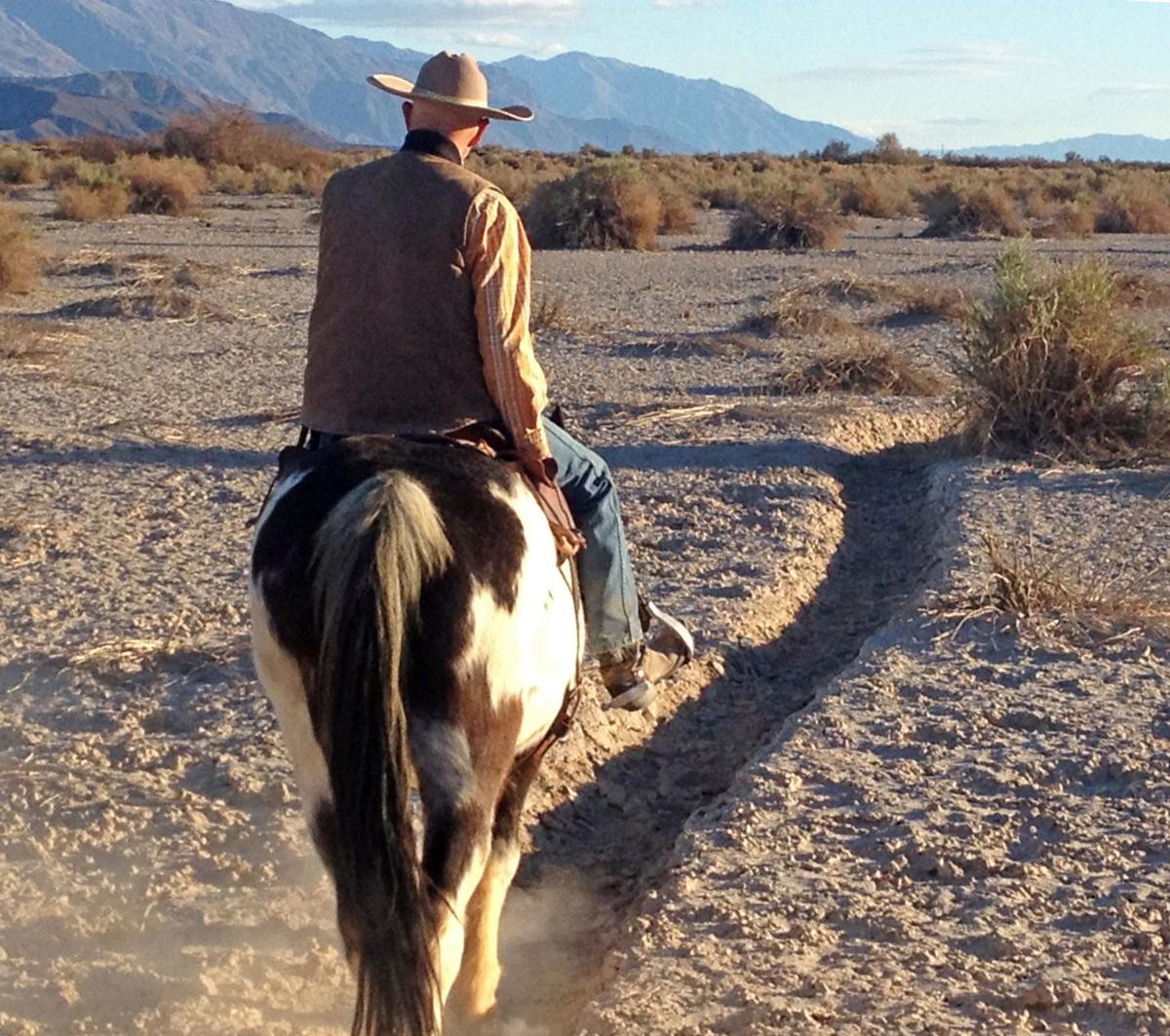 The guide takes the lead during a horseback ride on the valley floor in Death Valley.

The desert landscape and extreme climate of Death Valley National Park seem a little off, otherworldly even. Crooked peaks are capped with black lava, like thick fudge sauce drizzled over vanilla ice cream. Rocks mysteriously move across a dry lakebed. Some of the highest temperatures on earth have baked layers of mineral-stained sediment and volcanic ash into surreal outcroppings.

Death Valley looks so much like another world that it became one: Some of the scenes on Tatooine, the planet where Luke Skywalker was raised in the original “Star Wars” movie, were shot here. Death Valley stood in for a desert planet in the Outer Rim Territories populated by scavenging Jawas, the Sand People, Jabba the Hutt’s palace and abandoned mining machinery.

I got my first look at that otherworldliness in January when, not far from the park’s southern entrance, I walked up a steep path at Zabriskie Point and was struck by the shapes and colors of the uplifted rock. Over millennia, water has carved tiny rills and deep gullies into the rock. This trip, I thought, is going to be a geology lesson.

Bleak with mostly barren slopes, Death Valley is a place of unique features and unexpected character. Tectonic plates shift, mountains tilt, and the Ubehebe craters — formed centuries ago by an eruption of steam and molten rock — are ranked by the U.S. Geological Survey as a moderate threat to explode again. Salt flats and sun-bleached sand dunes spread across the valley floor. Rocks move across Racetrack Playa, propelled by a spooky combination of wind and melting ice. The lowest spot in the U.S. is here at Badwater Basin, 282 feet below sea level.

It is the hottest place on Earth and one of the driest. Florida communities often get more rain in a day than Death Valley averages in a year — about 2 inches — but when it does rain, the park is prone to violent flash floods that can reshape the rock canyons. Highs of 120 degrees are not uncommon — in the summer of 1996, Death Valley had 40 days that hit 120 or hotter. It holds the world’s record for heat: 134 degrees in July 1913.

The park — at 3.3 million acres the largest of the national parks outside Alaska — is part of the Mojave Desert in southeastern California, abutting Nevada. The drive from Los Angeles includes more than 100 miles of lonely desert driving after leaving the interstate, with scarce gas station or food stops between I-15 and the park. Although it’s located in the nation’s most populous state, its climate and remote location are daunting. Death Valley had only 1.3 million visitors in 2016, ranking it 19th among the 59 national parks.

When I was there in January, the highs ran around 60. It rained on and off, a rare occurrence, prompting park rangers and hotel workers to speculate optimistically about a big wildflower bloom in the spring.

January is between peak seasons, so the park was not crowded. When I was away from the hotels and organized activities, I encountered few cars and had the place almost to myself.

Hiking was comfortable. Park rangers were available on most days to lead visitors on several easy to moderate hikes at prime spots including Golden Canyon, where some of the “Star Wars” scenes were shot, and Badwater Basin.

It was raining on the morning I started driving to Badwater Basin for the hike. Roadside signs warned that flash floods could happen at any time. I stopped the car and thought about the ways of water: It seeks the lowest point. I turned my car around and stuck to higher ground while the rain fell.

Late one afternoon, I climbed onto a horse at Furnace Creek Stables for a low-lying view. The guide and I set out along the valley floor, not as low as Badwater but still almost 200 feet below sea level. The ground was flat and even, except for a narrow trough that wound through the creosote bush, desert holly and mesquite, where our horses walked.

The surprisingly flat valley floor stretches to mountains that rise abruptly and close in on all sides. They have sharp ridge lines, rocky slopes with little or no vegetation, and scars left by mining. On this afternoon ride, they were illuminated in a rich glow by the low angle of the winter sun, but it was easy to imagine them under the ruthless summer sun, the air shimmering with heat.

We poked along, watching for snakes and talking about the rugged mountains, the UFOs spotted close by in Nevada, the necessity to close the stables in May and ship the horses somewhere cooler, and the remains of Death Valley’s mines.

Death Valley got its name from would-be miners who got lost there while taking a nonexistent shortcut to California’s gold fields during the 1849 gold rush. Later, Death Valley developed its own mining industry in gold and silver, but the most successful was the mining of borax, a mineral used in detergents. The 20-mule teams that pulled wagonloads of borax across the desert became an icon of Death Valley.

Artifacts of that history — photos, fossils, chunks of minerals, mining equipment, wagon trains and cars — are displayed in a couple of small museums. One is the Borax Museum, located at the Furnace Creek Resort within the park, not far from the long-closed Harmony Borax Works, home of the 20-mule teams. The other is the Shoshone Valley Museum, about 50 miles southeast of the park, on California 127.

I visited both museums but wanted more. So on a day with clear skies, I set out from my hotel at Furnace Creek — now the most developed section of the park, with two hotels, a gas station and a park service visitor center — to see the area’s mining history. The road twisted and rolled gently upward through the Amargosa Mountains, from 190 feet below sea level to a ghost town named Rhyolite at 3,819 feet above.

Rhyolite, once the largest of the gold rush settlements, sits five miles outside the park’s eastern entrance near Beatty, Nev. The town was established in 1905, but the nearby mine went bust a few years later and the town died with it. Many of Rhyolite’s buildings were transplanted to settlements that bore more promise. But a number remain, including the railroad station; a “bottle house” built of thousands of (mostly beer) bottles in neat rows embedded in mortar; and the skeleton of a three-story bank, the debris from the walls and roof scattered on the ground. Signs warn visitors to watch for rattlesnakes.

Back at Furnace Creek that evening, it was dark. Very, very dark. Which was a good thing, because I was going stargazing.

Death Valley National Park is a dark-sky park, certified by the International Dark-Sky Association as being free of light pollution. Without outdoor lighting, the skies above the park are some of the darkest in the U.S. No kidding, I thought, as I struggled to park in a lot illuminated only by my headlights, then walked up an uneven path to a level space at Harmony Borax Works where a park ranger waited, a red headlamp glowing dimly on her forehead.

When it seemed that everyone who was coming had arrived, she turned off her headlamp and we turned off our cellphones. While our eyes grew accustomed to the dark, the ranger told stories about the stars — some ancient legends, some newly made-up stories that featured Death Valley.

I had never seen so many stars. Even the easy constellations I knew, Orion the Hunter and the Big Dipper, were hard to distinguish amid so many stars. For the first time, I saw the Milky Way with my naked eye.

But it is the geology that makes Death Valley unique. While other national parks have some of the same elements, nowhere do these elements combine to create the same spectacle.

I thought of that as I stood at Zabriskie Point, one of the most accessible features in the park and part of its badlands, shaped by the violence of flooding and sudden movements of the earth and colored by minerals in the sediment of a prehistoric lake. Around me, people speaking several languages took photos of the landscape, and a caravan of at least two dozen motorcyclists pulled up to see the landmark.

“Zabriskie Point” was a bad ’70s movie that was partly filmed at the landmark for which it was named. In fact, Death Valley is quite the movie star. The National Park Service says it has played a part in almost 100 movies and television shows, starting with “Chimmie Fadden Out West,” a 1915 silent movie directed by Cecil B. DeMille.

Death Valley must have changed since then — mountains eroded, new canyons carved out, the Furnace Creek oasis turned into a resort. But for me, with its harsh desert climate, long-abandoned mining operations and outlaw history, Death Valley will always be Tatooine.

Need to get away?

The guide takes the lead during a horseback ride on the valley floor in Death Valley.