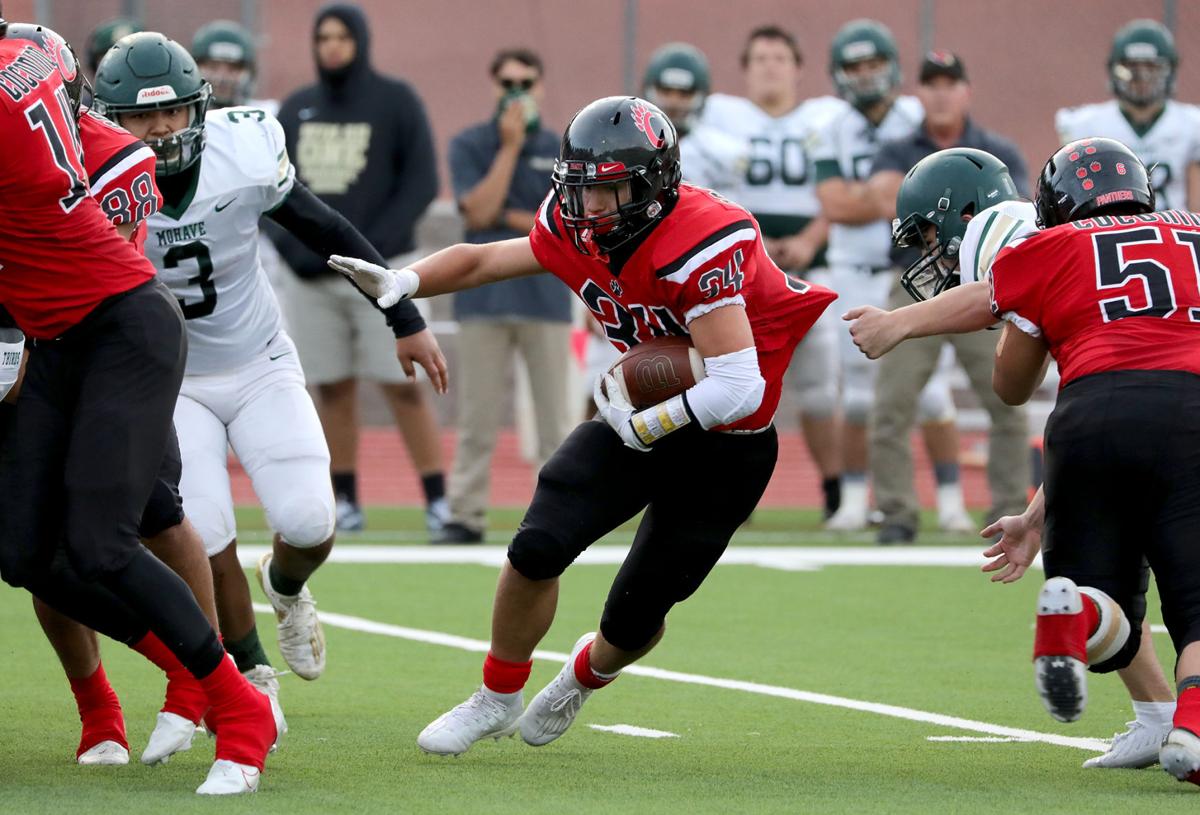 With help from teammate Kylor Dunlap (51), Coconino's Zach Bennett (34) breaks a tackle on his way to the end zone against Mohave Friday, Oct. 23, in Cromer Stadium at Coconino High School. 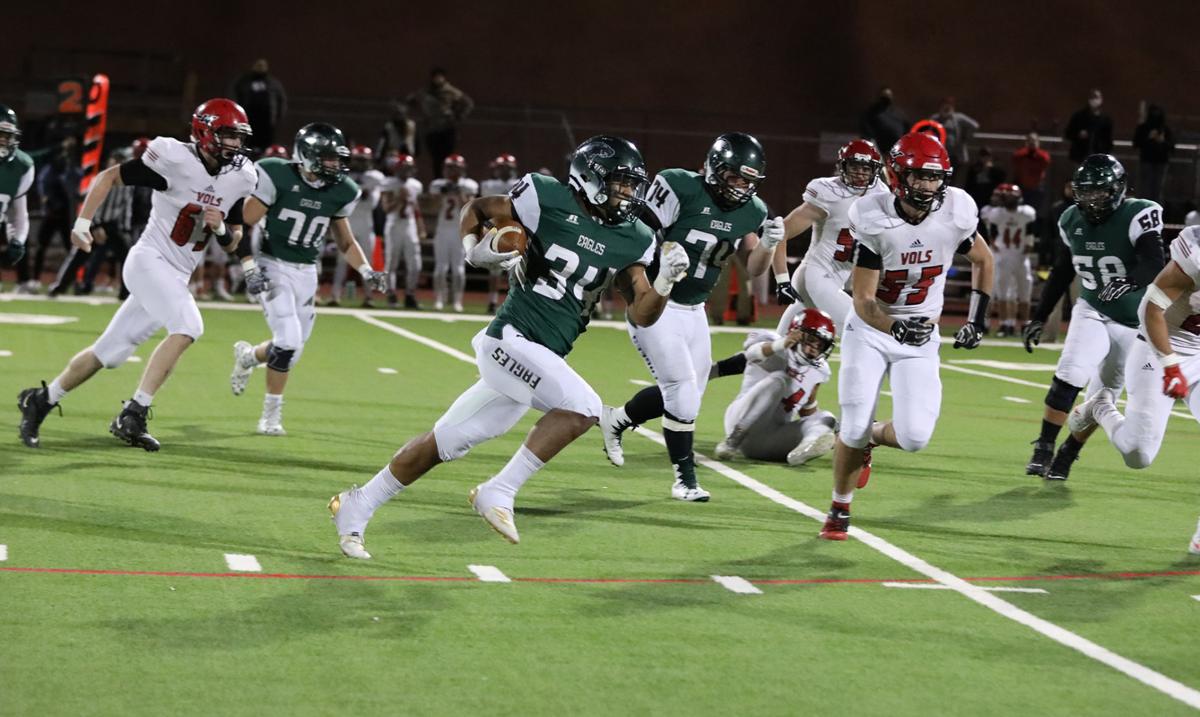 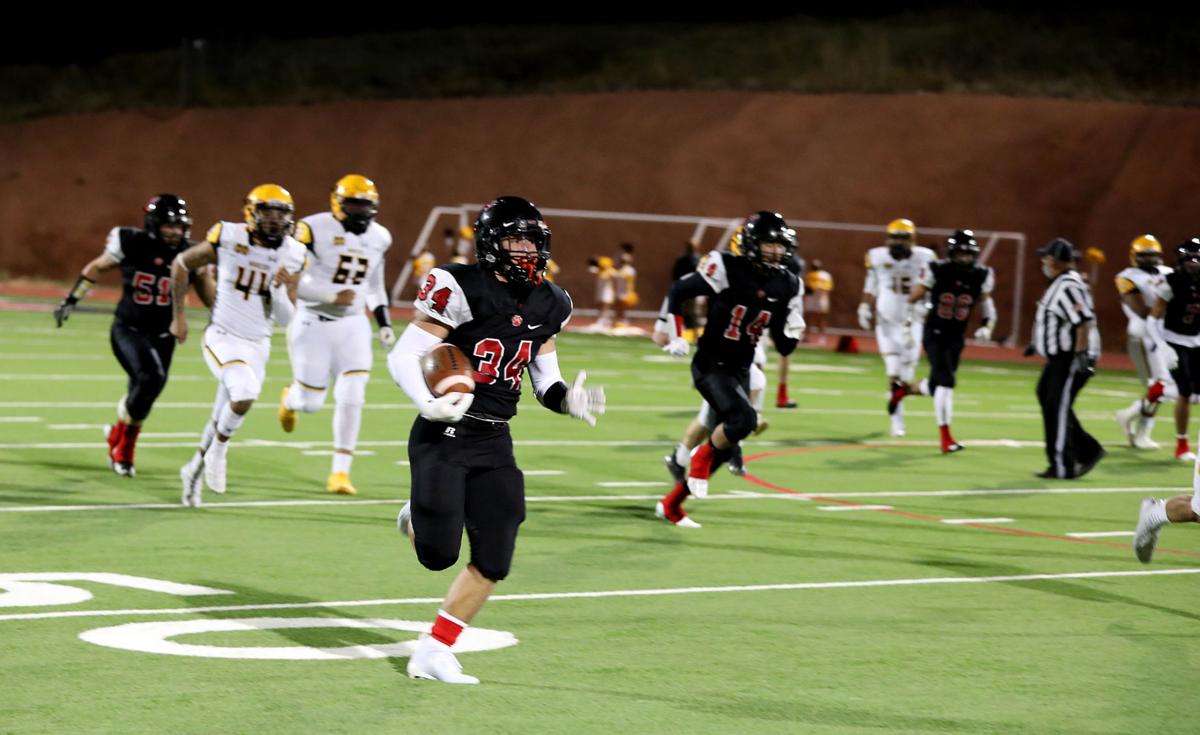 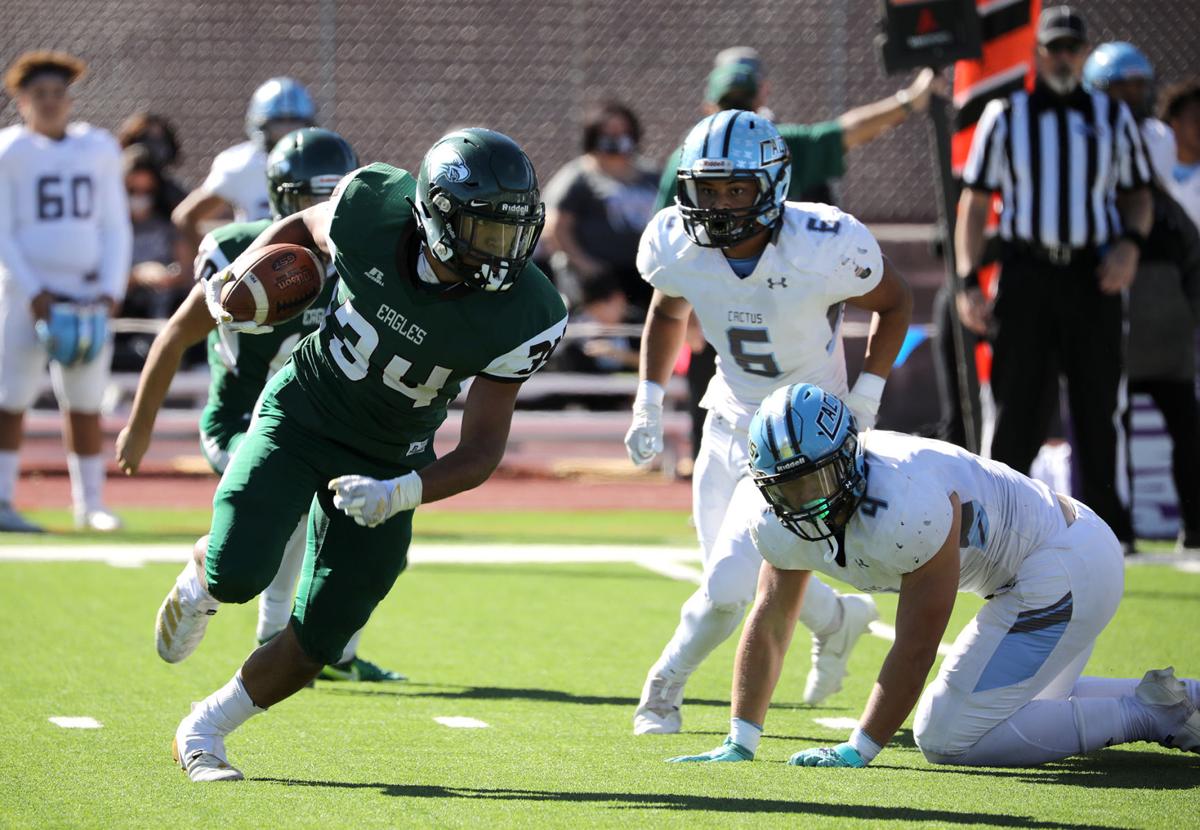 Flagstaff’s Luis Jaramillo (34) breaks away with the ball Saturday, Oct. 31, against Cactus at Cromer Stadium.

From Bruce Branch at Coconino to Flagstaff's lengthy history of star running backs including the likes of David Winsley, Stan Gill and Caesar Polk, the local football teams have seen their share of stud rushers.

Coconino's Zach Bennett and Flagstaff's Luis Jaramillo have made their way on each program's list.

Bennett has rewritten the Panthers football program's record book, becoming the team's all-time leader in rushing yards, carries, yards per game and rushing touchdowns -- along with nine other individual records to his name.

While Jaramillo hasn't completely etched his named in the Flagstaff record book the way Bennett has for Coconino, his impact and dominance for the Eagles has been obvious. In three years at the varsity level, Jaramillo has rushed for 3,027 total yards, 41 rushing touchdowns and has averaged 7.5 yards per carry -- with a career-best mark of 9.1 in his sophomore season.

This year, both are just shy of hitting the 1,000-yard mark in the COVID-19-shortened season. Bennett, at 925 entering the week, needs just 75 yards in the final regular-season game against Flagstaff, while Jaramillo, sitting at 860, needs a big game of 140 yards to hit 1,000 yards on the ground.

The two have gone back years -- all the way back to youth football here in town. They grew up playing with each other other up until high school when they went separate ways.

Each have been dominant in their own ways and acknowledge the other's talent and work ethic.

"Luis is a great running back and we played together for a very long time, and I'm very proud of what he has done in his high school career so far," Bennett said.

Since then there's always been a respect between the two. They are friends off the field, but once on it, things are a bit different.

"What makes it more fun is that when we are on the field we aren't friends anymore, we flip that switch," Jaramillo said. "After the game we can be friends again. ... I'm really glad to see what he is doing over there. I'm really proud of him -- all props to him, he's really been working, you can tell. It's just really cool to see two Flagstaff kids really get put on the map and get these Flagstaff kids some recognition."

One thing sticks out about Bennett's career the most. Ever since his first varsity year in 2018, Coconino has seen a complete turnaround.

From 2015 to 2017 the Panthers won a combined seven games. In 2018 under former head coach Mike Moran -- who lasted just a year in helping jump start the rebuild -- the Panthers went 7-3 and nearly made the 4A Conference state tournament.

While Bennett's sophomore season was eye-catching with 1,210 rushing yards and 15 scores, he really jumped on the scene and into spotlight in 2019.

Bennett was a beast that season. He rushed for 1,753 yards and 22 touchdowns -- both the top single-season marks in Panthers program history.

"It's been a joy, an absolute joy and a pleasure to watch him -- not just on Fridays but all the other days in the offseason, preseason and practice time," Lapsley said. "He really just takes pride in everything he does. ... He brings fire every day, and that's contagious among his other teammates and players."

While the 2019 season ended with a heartbreaking 10-9 loss in the first round of the postseason to Gila Ridge at home in Cromer Stadium, Bennett and the Panthers have known they aren't done.

The Panthers have said all season they want to make a statement each night. That could be a big reason the undefeated Panthers have won four of six games this year by two scores.

Bennett hasn't just been a rusher, though. He's been Coconino's main punter the past three seasons.

Flagstaff hasn't made a playoff appearance since 2007 and has had eight head coaches since then.

Things were rough for a good while for the Eagles, who won just three games in 2018. But, under second-year head coach Todd Hanley, things have started to turn around.

The Eagles, 11th in the 4A rankings as of Wednesday and sitting at 4-2 overall this season, sniffed the playoffs a season ago when they finished 6-4 and lost to Coconino by one score in the crosstown game.

The Eagles finished 20th, outside of the 16-team bracket.

Jaramillo's talent hasn't be in doubt despite the lack of playoff appearances. He has been a workhorse his three years but really didn't get the full carry load until last year when he had 176 carries for 1,032 yards.

Between this year and last, there was a massive difference for Jaramillo. He added muscle in the offseason and added to his open-space quickness. That willingness to put the work in has stood out to his coach.

"We talked about the things that we thought could improve his game and he took those things to heart," Hanley said. "He went and did it; it's been awesome. We have a ton of great kids, he just happens to be one of the great kids that is extremely talented. That's cool as a coach because those are the kids you dream of."

Unlike Bennett, who plays in a run-centered offense, the Eagles like to throw the ball -- more this season than last mostly due to the team having a better grip on the system. So while Bennett will get more than 200 carries in a full season, Jaramillo's workload is different and he is asked to be a weapon in the passing game.

Bennett has just seven career receptions while Jaramillo has 30 for 370 yards and four touchdowns.

Bennett and Jaramillo get most of the attention and recognition but you can't forget about the guys giving them running room.

Every time Bennett and Jaramillo are asked about their running talents they always make sure to give credit where it is due: to the big men up front on the offensive line.

"Just watching them develop,"Jaramillo said," over these past games -- at first it was a little shaky but that's just because of a new system -- but it was really fun watching develop and see where they need to block because it makes everyone's lives so much easier and it opens every thing up."

For Bennett, he gave props to his coach as well as the O-line.

"Lapsley's game plan every week and how he sets that O-line up and what they do to create the holes and gaps that I run through every Friday night is a huge part of what I've achieved so far."

With help from teammate Kylor Dunlap (51), Coconino's Zach Bennett (34) breaks a tackle on his way to the end zone against Mohave Friday, Oct. 23, in Cromer Stadium at Coconino High School.

Flagstaff’s Luis Jaramillo (34) breaks away with the ball Saturday, Oct. 31, against Cactus at Cromer Stadium.