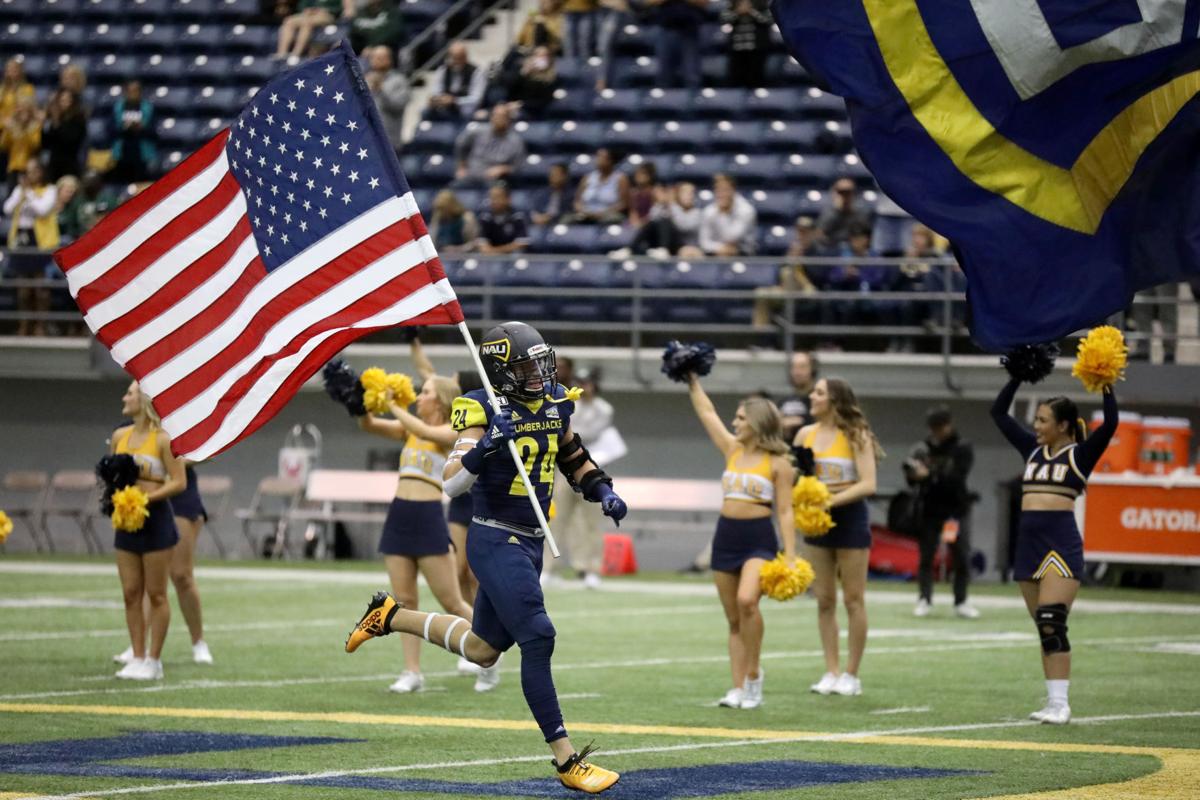 Northern Arizona defensive back Eddie McClendon (24) carries the United States flag onto the field before kickoff against Sacramento State last season at the Walkup Skydome.

The Northern Arizona football team is about to start a weird, unprecedented and, in some eyes, not ideal spring football season. The Big Sky Conference rolled with what many FCS leagues and teams decided to do: punt the fall due to the pandemic and go with a condensed spring schedule.

That change led to basically half of the Big Sky to bow out as powerhouses Montana and Montana State, along with recent contender Sacramento State and mediocre teams Northern Colorado and Portland State all decided to skip the spring, leaving eight teams left.

Between Montana, Montana State and Sac State, the Big Sky lost three teams that finished in the top four of the conference standings in 2019 as all three made FCS playoff appearances.

As for Northern Arizona, spring wasn't the first choice but there was never a lengthy thought about joining the other five Big Sky schools and not competing in the spring.

"No, there was no conversation about that at all," second-year Lumberjacks head coach Chris Ball said in a Zoom interview Thursday. "We were wanting to play 100 percent. We would have liked to play eight games. We wanted to play in the fall. We had a secondary schedule with nonconference games if they would have allowed us, but we have continued to move forward. President (Rita) Cheng and Mike Marlow wanted to play, I wanted to play, players wanted to play, our staff wanted to play. We are going to get to play six games and hopefully more than that."

The Lumberjacks get rival Southern Utah twice, to open and to end the regular season at home and away as the Thunderbirds will leave the Big Sky for the Western Athletic Conference following the 2021-22 academic year.

Weber State is league-wide the favorite to win the conference for a third straight time, especially with Montana and Montana State not in the mix. Eastern Washington is dangerous, with the top returning quarterback Eric Barriere hoping to break Weber's run at the top.

Just like all other sports that have happened at Northern Arizona, football will be without fans. Media will be allowed at games but will be spread out across the Skydome similar to the way it has been spread out in the Rolle Activity Center for basketball and volleyball.

The football team will be tested three times per week as part of COVID-19 protocols and will follow the Big Sky and NCAA standards. It is unclear if a single positive test would derail the team for two weeks like it does for basketball, as FBS teams still played games in the fall even if there was a positive COVID-19 -- seemingly ruling out close contacts with contact tracing.

As for the actual football side of things, the biggest question since the end of the 2019 season has been who plays quarterback for the Lumberjacks?

He said Oklahoma State transfer Keondre Wudtee, who joined the Lumberjacks summer of 2019 and backed up former All-Conference QB and one of the most prolific passers in program history, Case Cookus, will start at center in Saturday's opener against Southern Utah in the Walkup Skydome.

Ball added that Jeff Widener, a redshirt freshman, will also get playing time as the backup. It isn't farfetched to think Northern Arizona could use both, giving Widener snaps as he is younger and Wudtee is a redshirt senior who could come back with the extra year given if he wants.

Northern Arizona led the FCS in passing offense at 361 per game behind the prolific Cookus and a loaded receivers room. But, the Lumberjacks went just 4-8 overall and 2-6 in Big Sky play despite boasting the hot passing offense.

So, maybe expect a different offense with Wudtee's dual-threat ability.

"Going into it, even if we had Cookus coming back, we needed to run the ball better," Ball said. "In order for us to be successful we got to be able to run the football."

Among the entire FCS, Northern Arizona's passing defense allowed the third most out of 124 teams in passing yards allowed per game.

That, Ball hopes, could be shored up by another year under his defensive scheme plus transfers that could make an impact on defense.

Because practices are closed due to the pandemic, it is hard to gauge which players could be early reps or who is working with the starters or not. Saturday's opener is the first look really anyone outside of the program will see the Lumberjacks since the end of the 2019 season.

Northern Arizona faces Southern Utah Saturday at 1 p.m. in the  Skydome. The game will be aired on the radio at KAFF Country Legends 93.5 FM/AM 930 and is streaming live on PlutoTV channel 1058.

Northern Arizona defensive back Eddie McClendon (24) carries the United States flag onto the field before kickoff against Sacramento State last season at the Walkup Skydome.