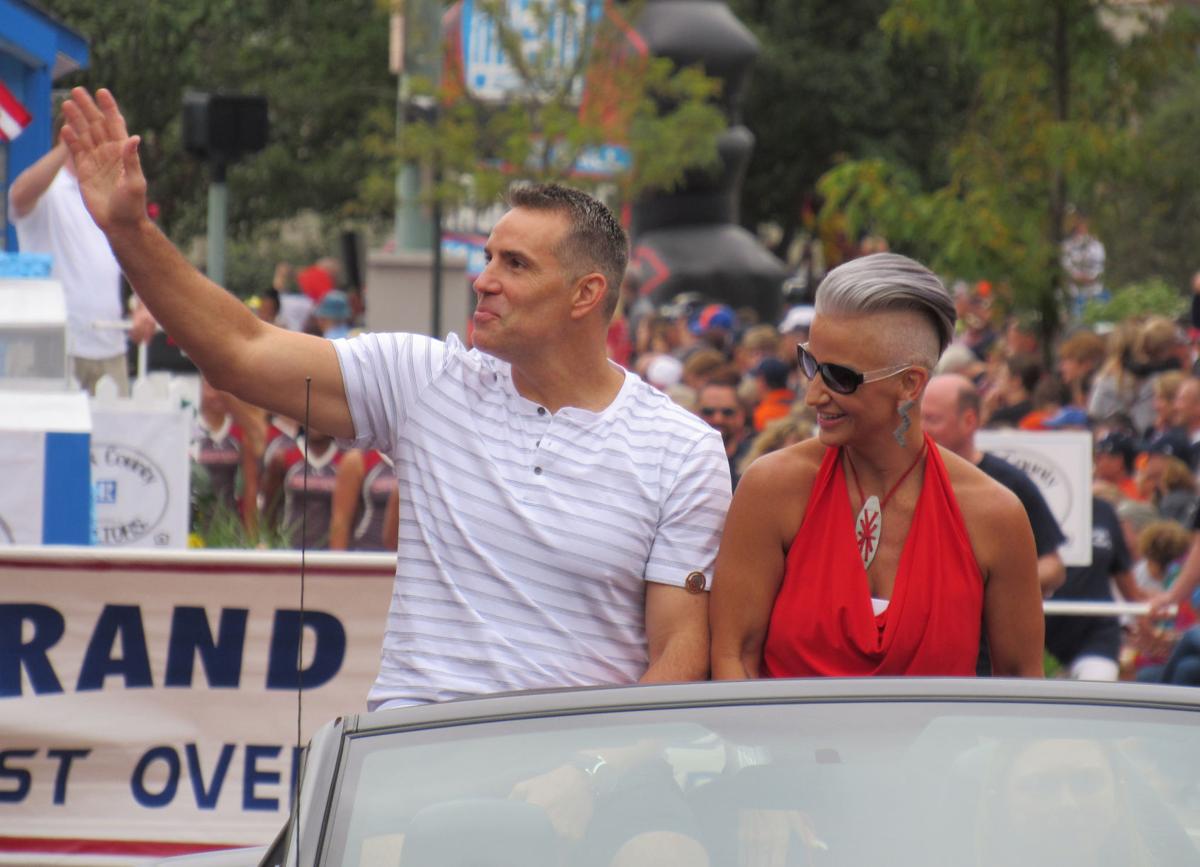 Kurt and Brenda Warner ride in the parade during the Pro Football Hall of Fame induction weekend in Canton, Ohio. 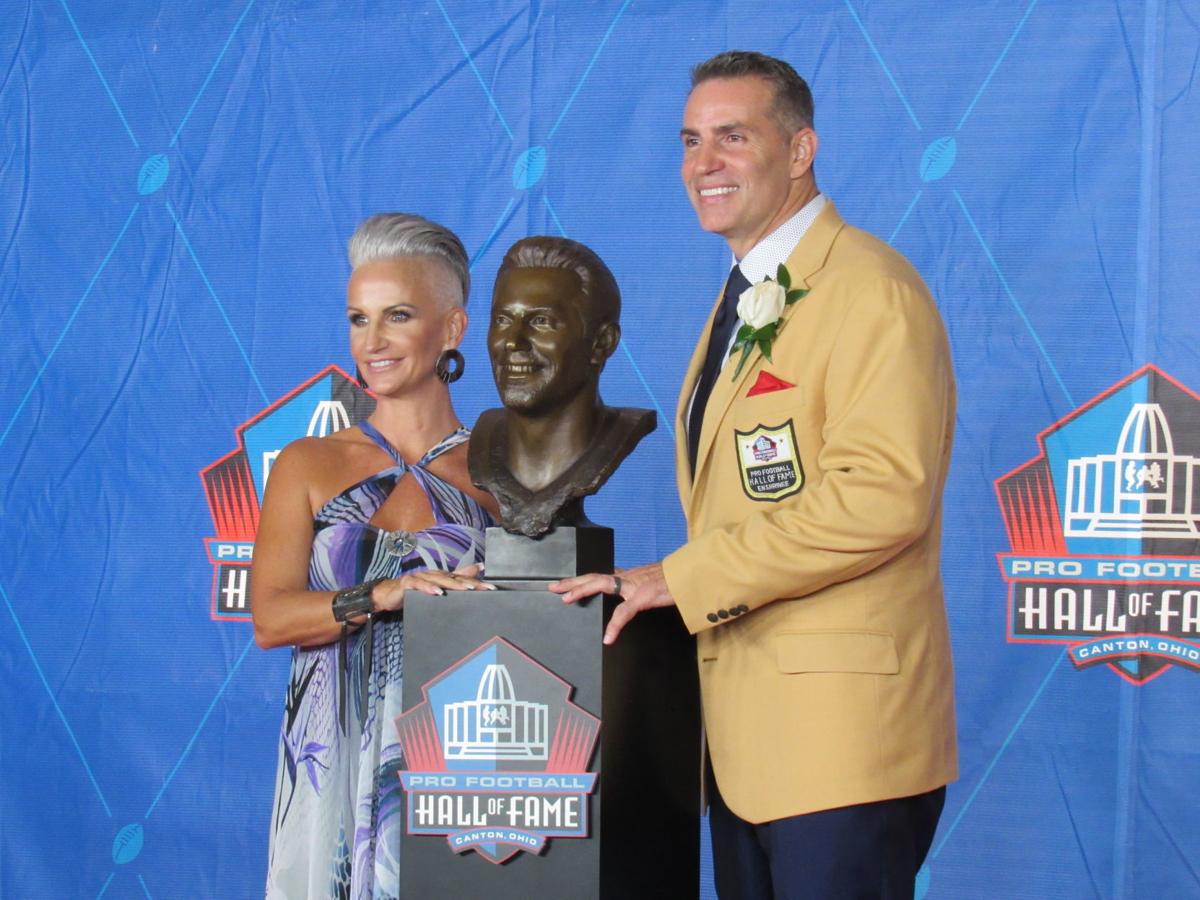 Kurt Warner’s unlikely rise from an undrafted football player stocking shelves for a grocery store to a Super Bowl-winning quarterback has become legendary in the sporting world. Warner shared some of his “bags to riches” story, as one writer has called it, during his induction speech at last night’s Pro football Hall of Fame induction. His speech ended an evening of presentations by seven inductees that stretched in the range of four hours.

Warner’s path to the Hall of Fame is one of the most unconventional of any Hall members. As a quarterback at the University of Northern Iowa, he didn’t start until his senior year, when he was finally able to show off his talent on the way to being named Offensive Player of the Year for the Gateway Conference. This limited success wasn’t enough to impress professional scouts and he went undrafted in the 1994 draft. He did get invited to attend the Green Bay Packers’ training camp, the odd man out in a competition that included superstar Brett Favre.

As Warner recounted in his speech, “The road to our dreams often has detours. So sometimes you gotta do what you gotta so, while you’re waiting to do what you were born to do.” That’s when Warner, needing to support his family, took $5.50/hour job at a Hy-Vee grocery store. He soon decided to give football another shot, and played Arena Football.

Finding success here, he earned a tryout with the Chicago Bears. This time, he fell victim not to stiff competition but a freak injury due to a spider bite. This forced him to miss the tryout and so he continued his Arena play, leading the Iowa Barnstormers to the Arena Bowls’s championship game. He again pushed for a tryout with an NFL team; an associate contacted 12 tams, but none of the 12 was interested in Warner. Then came number 13, the St. Louis Rams, who signed him to play for their European league team in Amsterdam. A successful year there earned him a tryout with the Rams the following year, and he made the team as the 3rd-string quarterback, an old rookie in the NFL at age 27. He only threw 11 passes that year but the following year moved up to second on the Rams quarterback depth chart.

That’s when Warner’s fortunes finally changed to the positive, and quickly. Starting quarterback Trent Green was injured in a preseason game and Warner finally got his shot as a starting quarterback. Seemingly making up for lost time, he performed so well in his first NFL start that he was named the National Football Conference’s Player of the Week. His Hall of Fame career was now on track, and he went on to break a bevy of records while leading the Rams (twice) and Cardinals (once) to the Super Bowl.

Warner sees his struggle as inspiration for anyone trying to achieve something. He said, “For a long time I convinced myself that I could will my way to my dream. As long as I wanted it bad enough I could make it happen.” And he finally did.

What makes Warner’s story even more compelling is his humility and integrity. Former NFL player Chris Collinsworth, who now serves as an announcer, captured the sentiment by other players of Warner’s story. “I think what makes it magical for all of us that follows the game is that the quality of the player is matched by the quality of the guy. And when that happens, it makes it even more joyous. For a guy to be the kind of family man he is, and represent all of us and the game itself the way he does I think makes us all smile a little bigger when Kurt Warner’s going to go and put on that gold jacket.

As Warner stood on the stage and recounted the people who influenced his life, his high standards—which he attributed to his strong religious faith and family support—came to the forefront. His message of hope and strength served as an inspiring and fitting end to the evening. He said, said, To those listening tonight, don’t miss your moments, both the moment to be impacted and the moments to impact.”

No. 9 Basis Flagstaff boys soccer (5-0, 5-0 North Region) continued its undefeated streak Wednesday with a 4-0 victory over Ash Fork on the road.

Kurt and Brenda Warner ride in the parade during the Pro Football Hall of Fame induction weekend in Canton, Ohio.