No. 1 Northland Prep Spartans girls soccer (6-1, 6-0 Central Region) solidified itself as the top fall season team Tuesday with a 2-0 victory over the second-ranked Chino Valley Cougars (6-1, 1-1 Central) in Flagstaff.

After dominating in-state competition for several years -- including the last four 2A Conference championships -- the Spartans fell 1-0 to the Cougars in the final of an exhibition tournament on Sept. 25. Though that game did not count in the AIA standings, it was one that Northland Prep wanted to avenge in Flagstaff.

“I think we had a good recovery from the last time we played them. We definitely battled in that last game, but we just kind of put the cherry on top of this one,” said Spartans junior goalkeeper Milly Gindorf.

Sinagua Middle School’s turf field had snow on parts of it on a cold day. Neither team could get a handle on the ball or weather early in the rivalry match. Playing relatively safe defense against excellent forwards from both sides, neither had much of an opportunity to score in the first few minutes.

In the ninth minute, Spartans sophomore forward Mollie Donahoe got open following a through ball, and had a one-on-one opportunity against Chino Valley’s keeper, but her shot was parried wide by a diving save.

Northland Prep, sensing an opportunity, started moving the ball around more efficiently, threatening to score. It finally happened in the 21st minute. The Spartans put together a long string of passes, ending with junior Hannah Petrucci facing just the Cougars goalkeeper.

She slotted it into the goal with relative ease. It was the kind of play, she said, that Northland Prep can rely on to score against tough opponents.

“It was pretty awesome; it felt nice to get the lead,” Petrucci said. “Usually when we get four or more connections in a row, we can get a goal, so that’s kind of our thing and it happened there.”

The Cougars nearly equalized just four minutes later. Following a scrum during which neither team could secure the ball in Northland Prep’s half, a Chino Valley forward found just a bit of space and got a shot off, but the ball hit off the post and bounced away from the goal.

Donahoe had another shot on goal in the 34th minute for the Spartans, but they went into halftime up 1-0.

In the first few minutes of the second half, Chino Valley was the aggressor. Spartans co-head coach Michael Blair said the Spartans had made adjustments in the formation, including strengthening the back line, and were trying to hold on to their narrow lead.

“In the second half we held a few back with the 1-0 lead and the weather and everything,” Blair said.

Even with a solid defense, the Cougars, who suffered their first regular-season loss of the fall, still found their way into the box on a few occasions. Gindorf made a pair of diving saves in the 58th and 65th minute, keeping Chino Valley off the scoreboard.

“I knew I could rely on my defense but that I would have to make a couple saves because they have a good offense, but I was just confident,” she said.

Meanwhile, Northland Prep started to counterattack in the last 20 minutes, creating its own chances to score and increase the lead. In the 68th minute, Donahoe caught the ball on her feet after a long through pass, and shot past the keeper but off the crossbar and out.

Then in the 77th minute, the Spartans drew a penalty. Sophomore Kyra Wilkens’ shot to the left of the keeper was saved, though.

Blair was impressed with his team’s ability to create scoring chances, but said the key to continued victories will be capitalizing with goals.

“That’s our goal the rest of the season, to just finish those opportunities when we have them,” he said.

Finally, with five seconds left in the game, senior Hannah Finney scored off a rebound to increase the lead to 2-0 and secure the victory.

The win over the Cougars, who were ranked No. 1 heading into the contest, likely gives the Spartans an inside route to the No. 1 seed in the playoffs, which begin on Nov. 4.

Petrucci said Tuesday’s match was likely a preview of a contest that could happen again in the postseason -- even in the state championship game.

“I kind of think of it like a 1-1 tie right now. We’ve got to beat them when we play them again in the future,” she said. 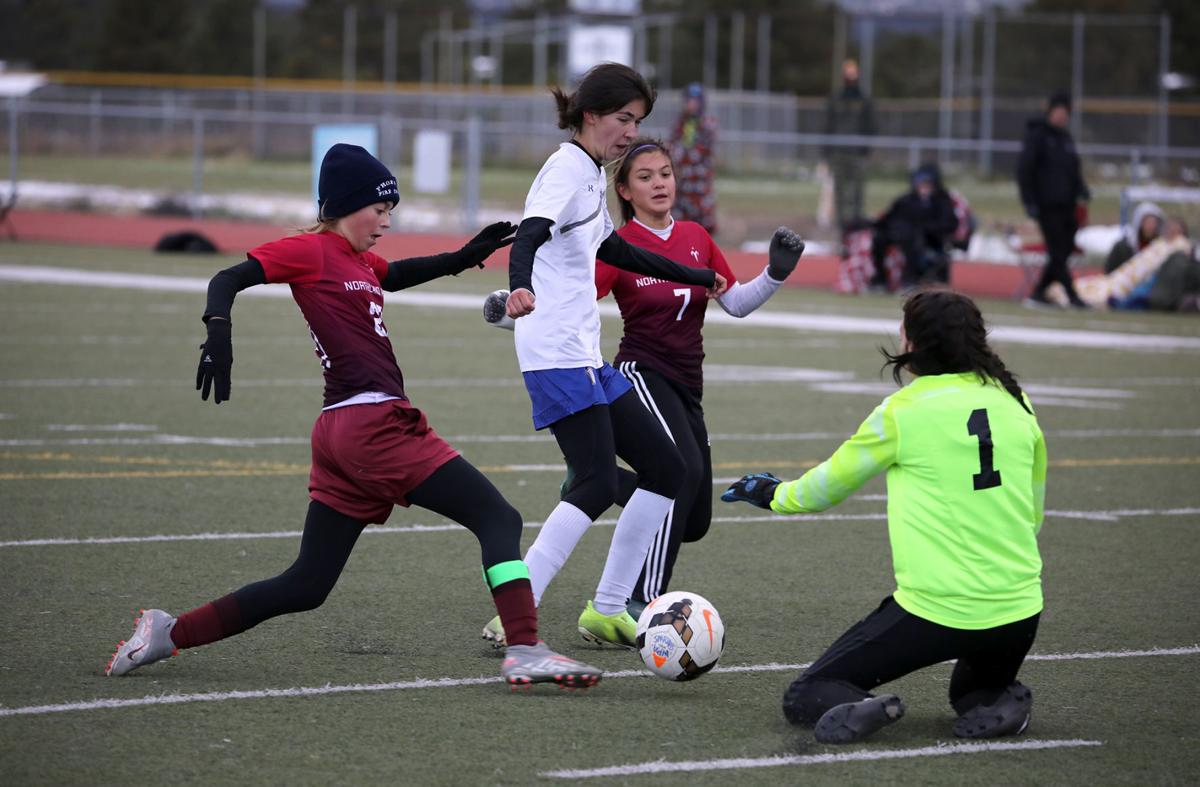 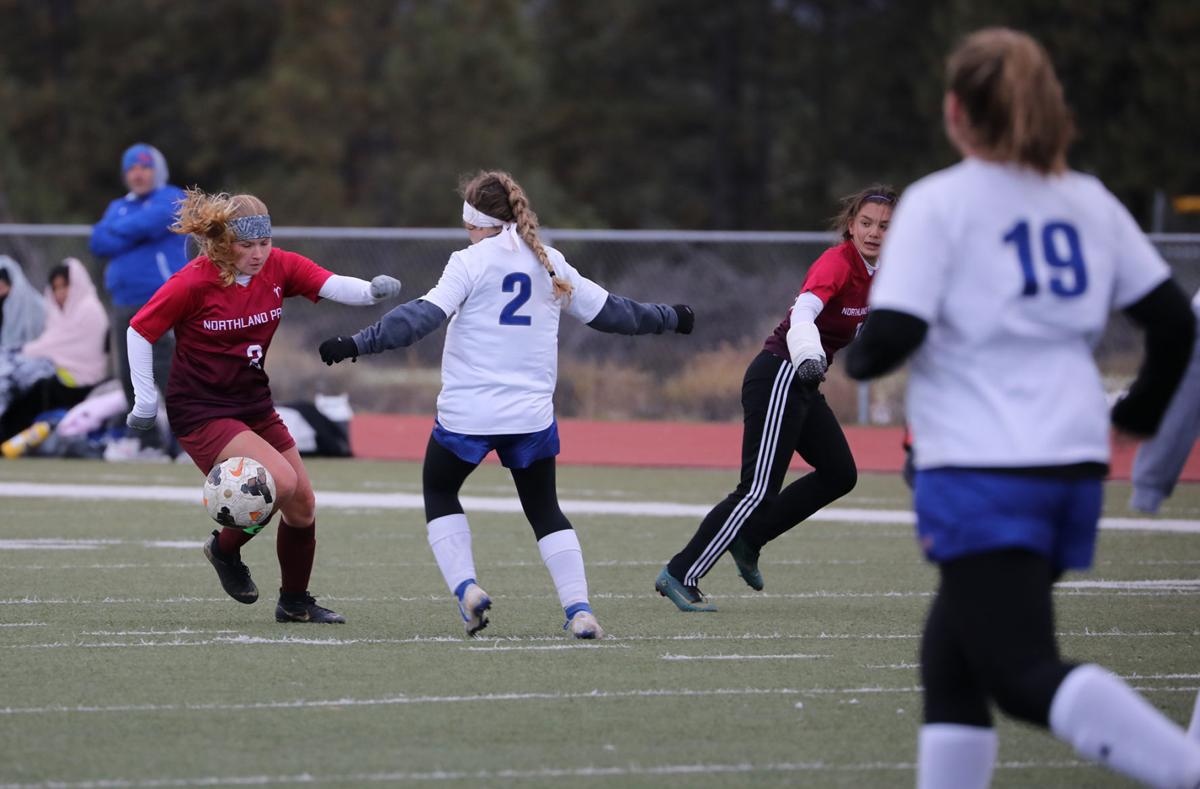 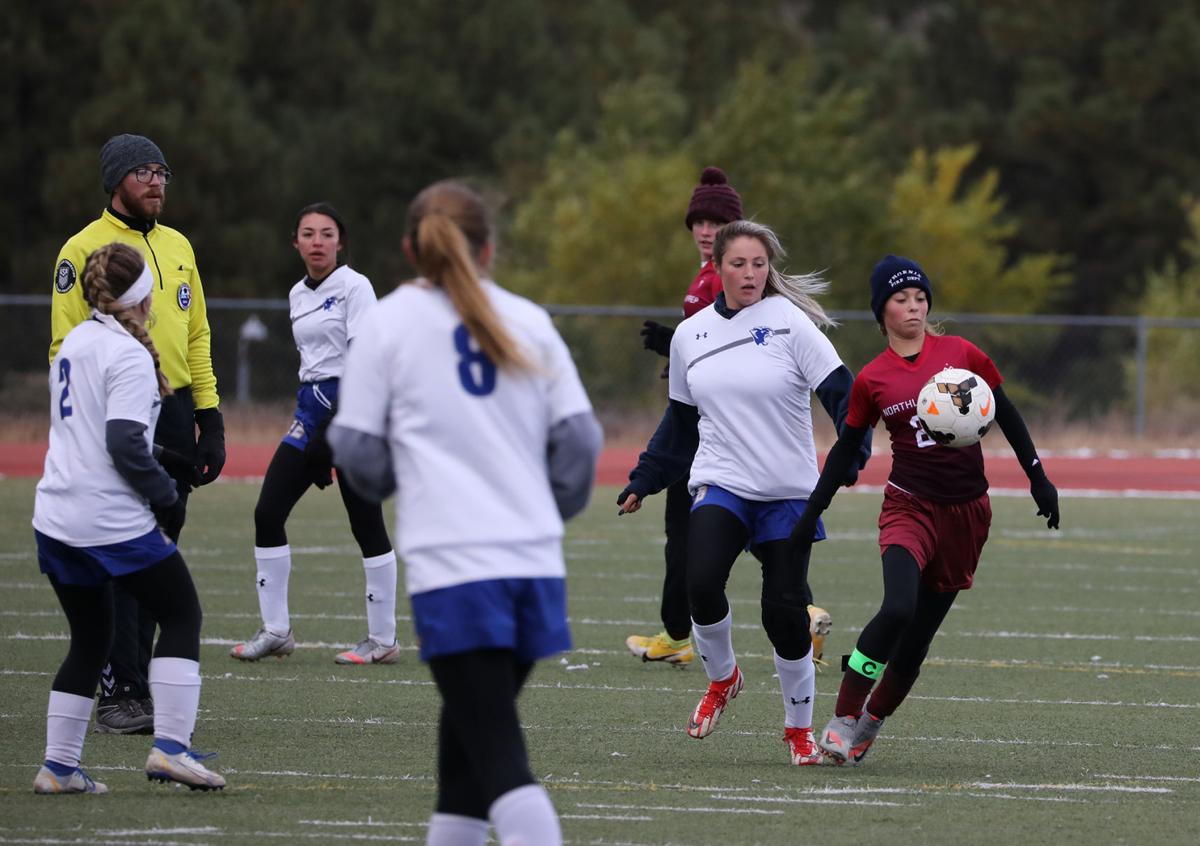 Northland Prep’s Hannah Petrucci (27) takes control of the ball as she moves it up the field Tuesday afternoon against Chino Valley.