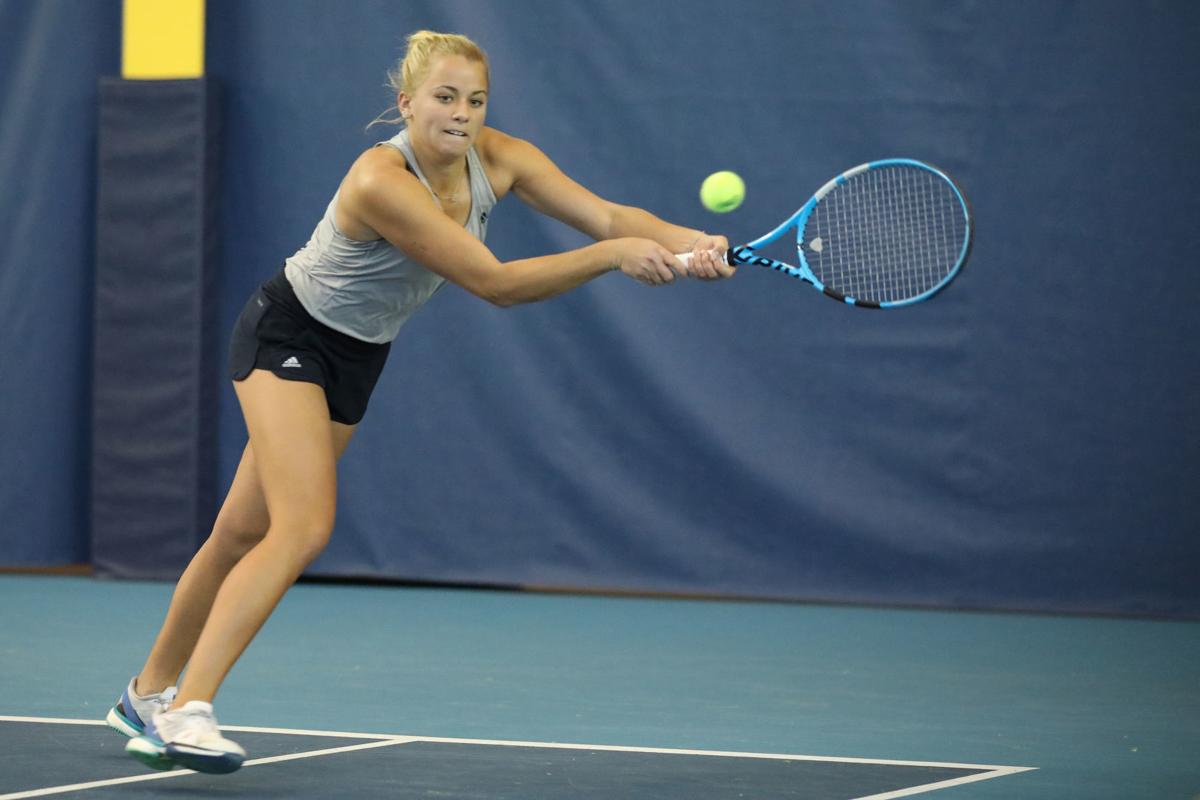 Northern Arizona’s Chiara Tomasetti stretches out to return a New Mexico State serve during a match in the Aquatic and Tennis Complex.

Locked in a close first set with Pacific’s Klara Kosan two weeks ago, Chiara Tomasetti was unfazed. The Northern Arizona senior finished out the set and then dominated her opponent in the second to close out her ninth straight victory.

Little did everyone know that Kosan was not just another player to take her shot at Tomasetti only to come up empty. Kosan would be the last player Tomasetti would ever face as a Lumberjacks tennis player.

Due to the coronavirus pandemic, the Big Sky Conference on March 18 canceled the remainder of the 2020 spring sports season -- 10 days after the Northern Arizona women’s tennis team’s 5-2 victory over Pacific. Just like that, Tomasetti’s illustrious career and her teammate's season came to an abrupt halt.

“I thought about how I’ll never have a Senior Day; my emotions were all over the place,” said Tomasetti after hearing the news of the cancellations. “I was super sad and confused, and I didn’t believe it. This was not the ending I was hoping for.”

Tomasetti’s wide range of emotions are among those shared by the many seniors whose careers effectively came to an end with the sweeping announcements across the country from the NCAA.

Still, it does not ease the disappointment of what was shaping up to be the best individual season in program history that likely would have concluded with Tomasetti becoming the first Lumberjack -- and just the sixth player in conference history -- to qualify for the NCAA Women’s Tennis Singles Championship.

Tomasetti’s senior season began with a championship at the ITA Bedford Cup in the Mountains in September and a dominant run toward a second consecutive ITA Mountain Regional Championship a month later. All in all, Tomasetti competed at the ITA trifecta of Oracle ITA Masters, ITA All-American Championships and Oracle ITA National Fall Championships during the fall season.

During the spring, Tomasetti notched victories over opponents from four Pac-12 schools (Washington State, Arizona State, Arizona and Oregon) and was a perfect 9-0 in dual play. Her last dual season began and ended with nationally ranked wins against Illze Hattingh of Arizona State and Kosan of Pacific.

“Honestly, four years ago I didn’t think a place like NAU could help me so much,” Tomasetti said. “I grew as a person and a player. I’m super happy about the opportunity I had the last four years and super thankful for everything NAU did for me.”

Tomasetti was exceptional from the start of her career, earning a Big Sky Co-Freshman of the Year Award in 2017 and a unanimous All-Conference First Team selection in singles and doubles. Her sophomore year ended with a second All-Big Sky First Team nod in singles and a second team honor in doubles.

Tomasetti’s jump from solid underclassman to one of the program’s all-time greats took place last season as a junior, when she became the fourth Lumberjack to be voted Big Sky Conference Most Valuable Player in addition to earning her third first team singles accolade.

Her ascent to the top of the Big Sky was as clear as the Phoenix skies above her on April 27, 2019. That was the day that Tomasetti avenged her only dual loss to date of the 2018-19 season and clinched Northern Arizona’s first Big Sky tournament title in 20 years. In the championship clinching match, Tomasetti took down Idaho’s Mariana Petrei -- the reigning three-time Big Sky MVP at the time -- by a dominating 6-1, 6-2 margin just a week after Petrei got the best of Tomasetti in their regular-season matchup in Flagstaff.

“For me personally, that was huge because I really respect (Petrei) as a player,” Tomasetti said. “She helped me a lot because I thought I was close to her level. She was the MVP for three years and she made me work harder. The fact that I beat her at the very end when it counted the most was a dream come true.”

Tomasetti’s championship win against Petrei gave her the confidence she needed to take it up another level in her senior season. That level proved to be something this program had not seen in decades, if ever.

As impressive as her 36-7 singles dual record was through her first two years, Tomasetti was nearly unbeatable in her final two seasons, compiling a 30-2 record in dual matches all at the No. 1 spot in the lineup. She concluded her career with a program record 66 singles wins (dual matches only) and the program’s best dual match winning percentage (.880) by a wide margin. Tomasetti is also third with 51 career doubles wins in dual matches.

Tomasetti ended her junior season ranked No. 110 in the country and elevated to a program all-time high of No. 44 this spring.

She defeated four nationally ranked opponents between the fall and spring seasons, including a win against Pennsylvania’s Iuliia Bryzgalova, who was ranked No. 13 in the most recent poll prior to the season’s cancellation. In her last two seasons, Tomasetti notched eight total victories against nationally ranked players.

But more than the individual accolades, Tomasetti leaves as a Big Sky champion.

“The championship will be the memory that will be the most present in my mind,” Tomasetti said. “Last year, if we didn’t win Big Sky, I thought we still had next year -- which is not the case -- so I’m happy we achieved everything we did last year. We were so close as a team, and this year we were close, too. All of us believed we could win again.”

The Lumberjacks, who were picked as the unanimous favorite to repeat as conference champions, were undefeated in conference play at 2-0 this spring before the abrupt end.

Her Lumberjacks story started with visiting her brother, Fabio, in Flagstaff during his lone season as a member of the men’s tennis team in 2013-14, and ends with departing as the most decorated player in Northern Arizona women’s tennis history.

The heights that Tomasetti might have reached in the final two months of her Lumberjacks career will never be known. How many wins would Tomasetti have tacked on to her school record total? How many Big Sky Player of the Week awards could Tomasetti have added to  her conference-record 12?

What would Tomasetti have done at the NCAA tournament?

Questions left unanswered that would have only enhanced Tomasetti’s legacy as one of the most dominant NAU student-athletes across all sports in recent history.

For now, the three-time Golden Eagle Scholar-Athlete award recipient will head home to Germany to complete her degree in business economics online before focusing on pursuing a professional tennis career.

Tomasetti is currently No. 48 in the German tennis rankings.

“If you put in a lot of work, you can achieve so much,” Tomasetti said. “That was a huge learning process for me here. My coach would say, ‘Trust the process.’ Working every day in the weight room and on the tennis court, I saw my progress and that keeps me motivated to see that I can achieve a lot.”

PHOENIX -- Although records of women playing organized tackle football can be found as early as the 1920s, the sport has struggled to sustain …

Northern Arizona’s Chiara Tomasetti stretches out to return a New Mexico State serve during a match in the Aquatic and Tennis Complex.