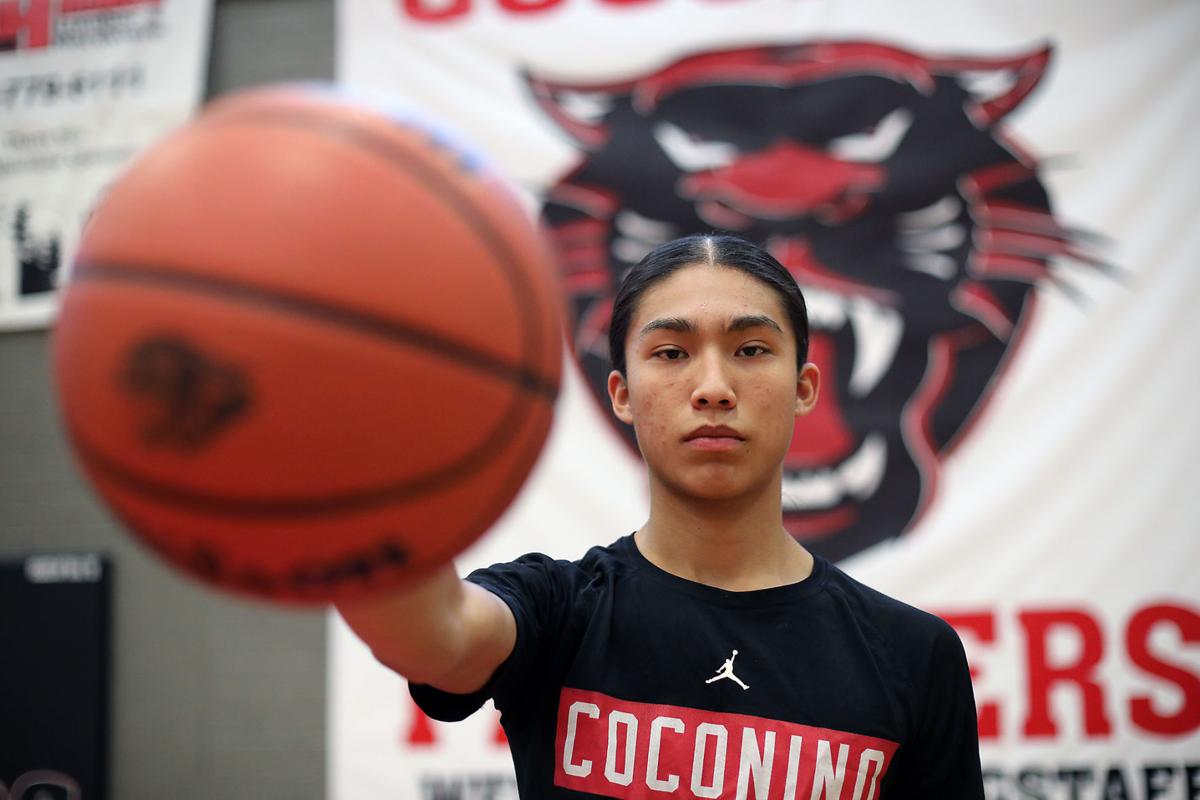 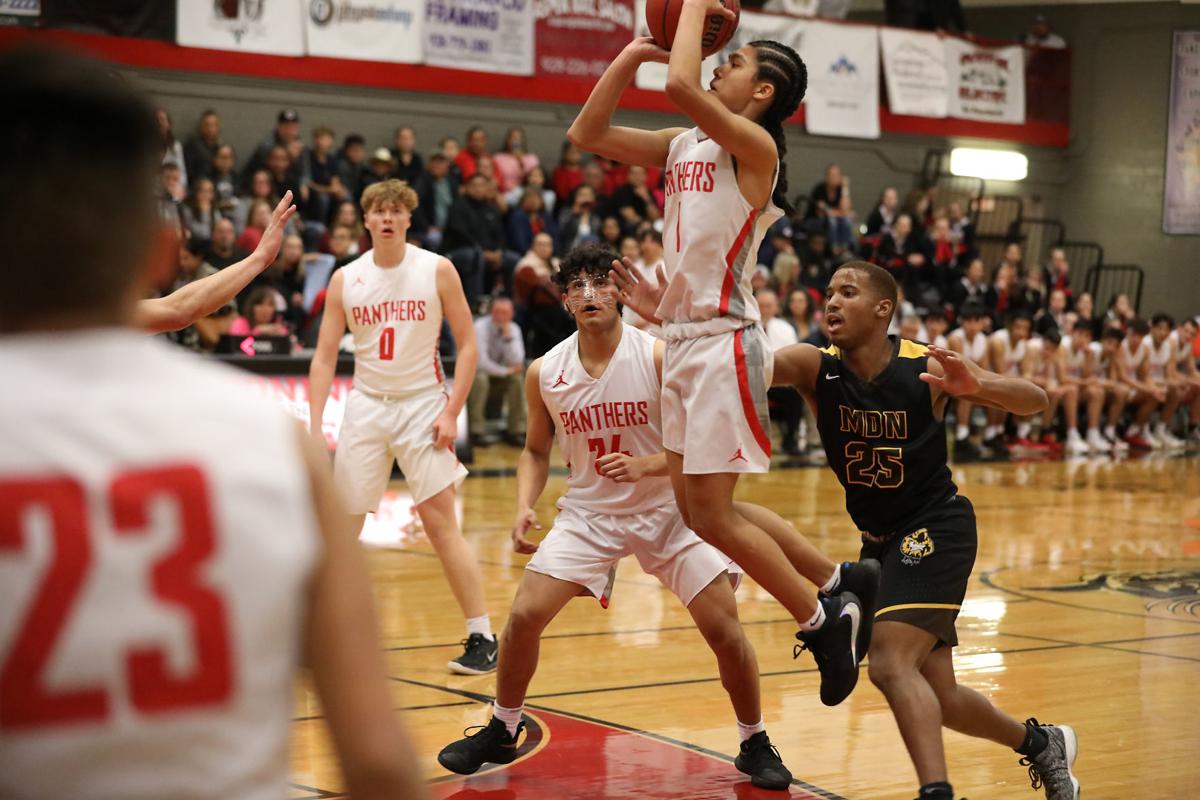 Coconino’s Preston Olney (1) shoots for a 3-pointer in a game against Macros de Niza during the 2019-20 season at Coconino High School.

That’s never stopped the Coconino boys basketball guard from taking on a challenge. He doesn’t care how big, talented or strong an opponent is.

"I do take pride in that," Olney said of challenging taller players. "A lot of people have told me since I was younger that I was too short to be playing basketball. I've heard it before, so I take pride in the competition and being competitive and giving people a hard time."

The point guard played with heart and was a massive part of getting the Panthers program back to the top of the mountain as the Grand Canyon Region champions for the 2019-20 season.

Olney and teammate Jacob Begay, the reigning Grand Canyon Region Defensive Player of the Year, were two of the best defensive guards in the 4A, shutting down some of the best scorers the conference threw at them.

For his part in leading the Panthers boys hoops program back to contention, as well as his highlight-making play style and suffocating defense, Olney is the 2020 Arizona Daily Sun Boys Basketball Athlete of the Year.

Olney, who won the region defensive player of the year award in 2018-19, upped his numbers offensively across the board from his sophomore season to his junior, partly because of a key transfer that happened between the years. Former Coconino and current Winslow guard Roy Billups played point guard while Olney played off guard in 2018-19 before Billups decided to transfer east on Interstate 40.

The move put Olney at point, and although he has had to improve in getting teammates involved and learning when to pass rather than hunt for his shot, he has thrived at the position.

"It was kinda hard early on because he has always been a scorer," Panthers assistant coach Julian Begay said. "So we kinda had to sit him down and he had to learn when to shoot, when to attack, when to get us in the offense and when to facilitate and get everyone else shots."

Olney averaged a team-high 14 points per game, a team-high 2.8 assists, was second in rebounds at 3.9 and led the team in steals at 2.6 per game -- doing a bit of everything for Coconino.

The 5-9-ish point guard shot 45% from the field, 88% from the foul line and a blistering 40% mark from deep, doing so in a number of creative ways.

Whether it’s off a high screen and roll, a stepback or a crossover dribble into a pull-up jumper, the shifty guard knows how to create space anywhere on the floor despite his small stature.

Sometimes, Julian Begay said, Olney can fall too much in love with the pull-up or stepback.

"There is constantly times in timeouts I got to tell him, 'You got to stop shooting and start attacking, go downhill and get to the free-throw line,'" he said with a smile, looking over at Olney.

If there is anyone that knows Olney well enough, it’s Julian Begay. He has coached the junior guard and other members of the Panthers program over the years since before many of them even hit junior high school.

The biggest change from a year ago for Olney, according to Julian Begay, was Olney's work to learn the point guard spot and willingness to figure out how the position works.

"He's done a phenomenal job just being the floor general, and when we need a bucket, when we need something, he's the guy we look to," Julian Begay said. "It's been really fun to see him grow and develop from a very young age till now."

The Panthers went 22-9 last season when counting games outside the power-points slate, and fell just once in the region at 11-1. Coconino lost to four teams that made the 4A state quarterfinals, including eventual state runner-up Peoria.

Three of the losses were by single digits, with Peoria being the exception.

Those close calls against some of the best of the best in the 4A, Olney thinks, showed the rest of the league that Coconino can go toe to toe and hang -- and get a win.

"We definitely showed them we can compete, and we definitely played our hardest every game so we could get to that point," Olney said.

Next year, Olney said, the next step is to get some wins over those stronger schools.

"We want to get some wins over those teams and show what we can do," he said.

The outpouring of support from the Flagstaff running community for one of their own, Tommy Rivers Puzey, continues.

Tommy Rivers Puzey is the type of guy who, if you're involved in the rich and deep Flagstaff running community, you know him by his trademark …

The Flagstaff Scrappers 12U club softball team went 2-3 at the 9Star 2020 State A Championships over the weekend in Williams.

High Country Running: Is it possible to have too many trails?

For over 50 years and during all seasons, I have been so fortunate to run the terrain, absorb the views, smell vegetation and watch animals, w…

While I hoped we would see one another in person during our beloved Flagstaff Summer Series, COVID-19 continues to spread across Arizona. To d…

Northern Arizona Athletics has "less than 3%" active COVID-19 cases among its athletes, a university spokesperson said in an email Friday.

The Phoenix Suns have sold their G League affiliate, the Northern Arizona Suns, to the Detroit Pistons, according to a statement released Wedn…

The outlook of the 2020 college football season feels like it changes by the day, but even so Northern Arizona is slated to start fall camp We…

When the XFL folded in April just barely into its inaugural season, Sammy Lawanson found himself having to find a coaching job in the middle o…

Coconino’s Preston Olney (1) shoots for a 3-pointer in a game against Macros de Niza during the 2019-20 season at Coconino High School.