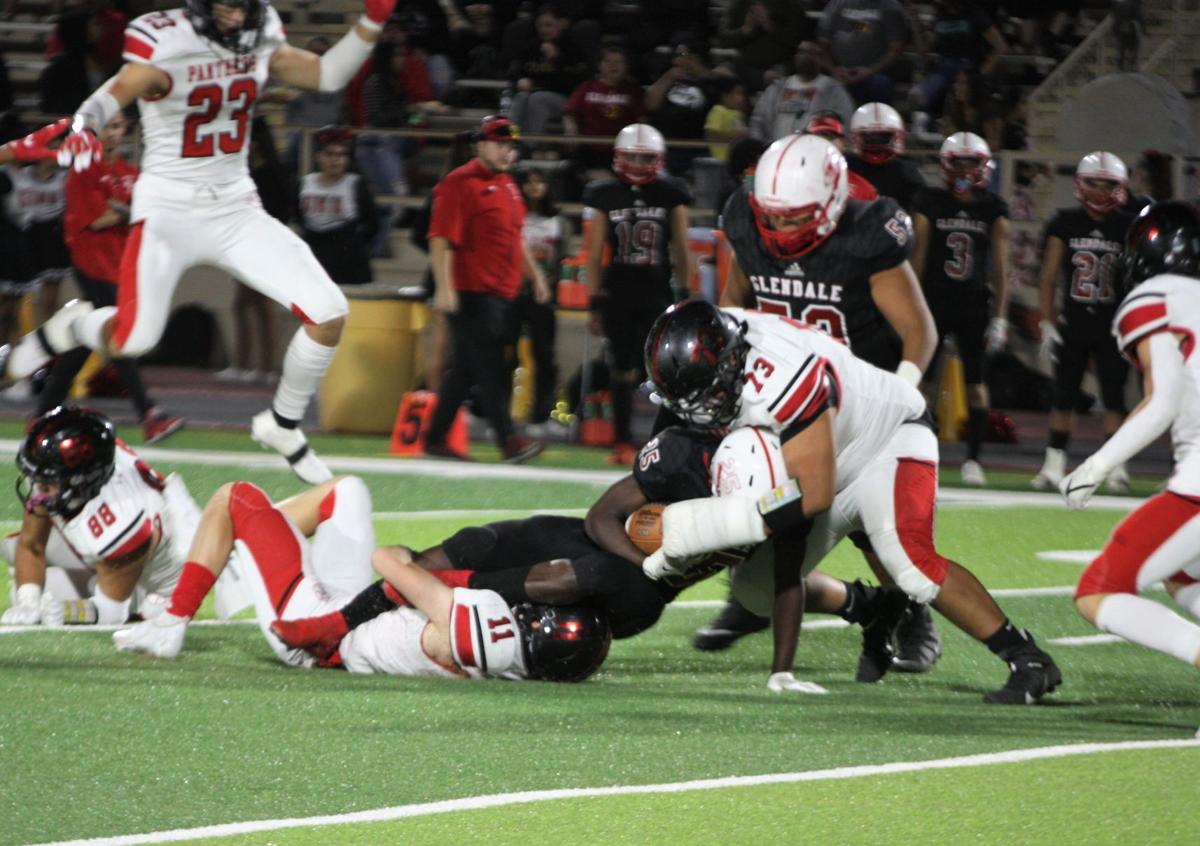 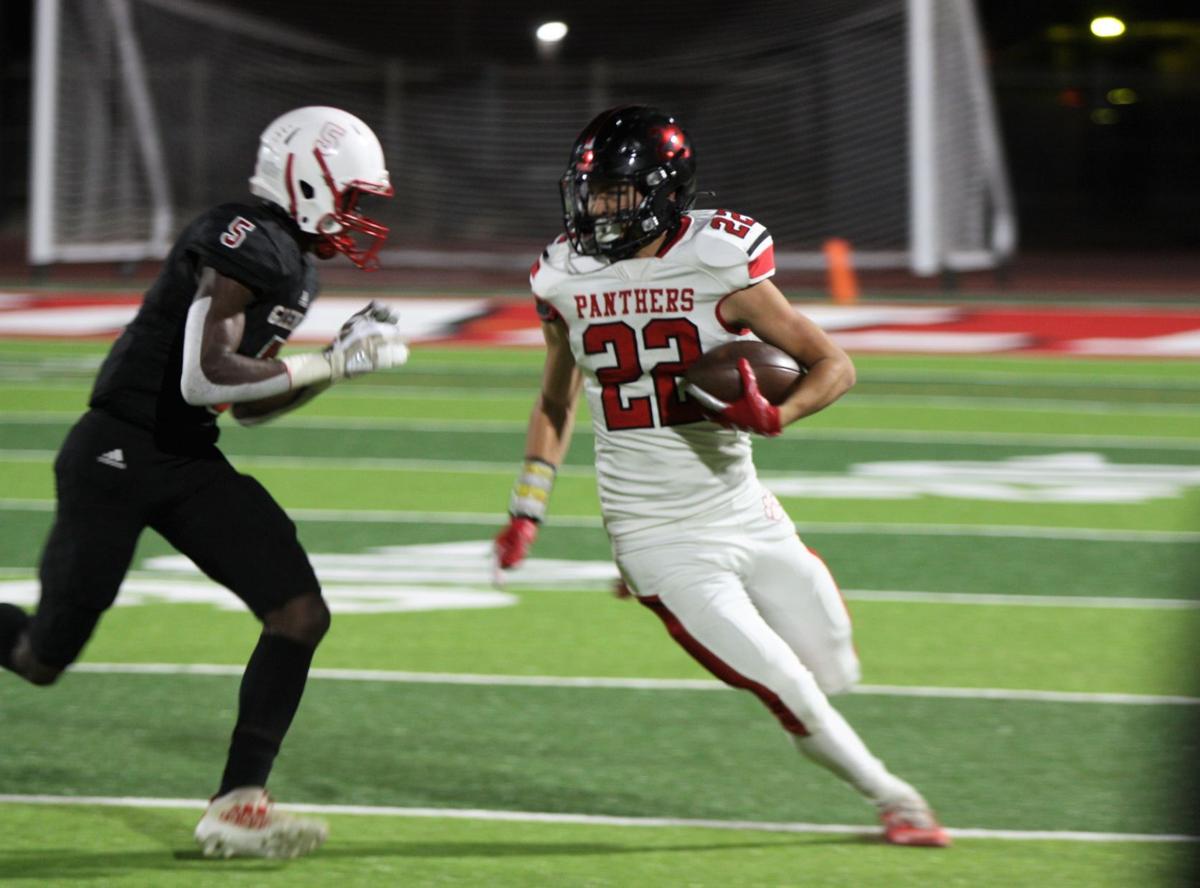 Coconino senior running back Gabriel Callado (22) carries the ball during a first- round state tournament game at Glendale High School on Friday. 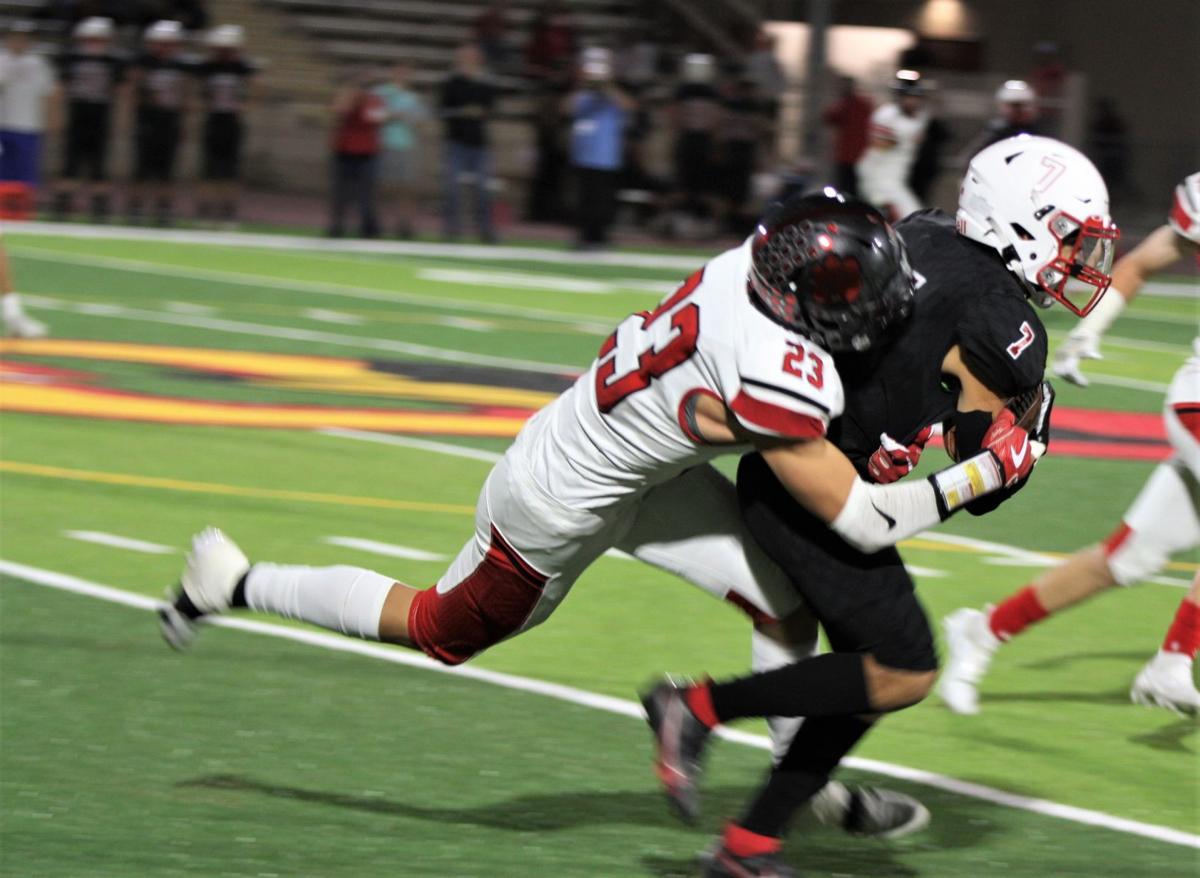 No. 4 Glendale’s high-powered rushing offense and a few key missed plays by 13th-seeded Coconino cost the visitors, as the Cardinals advanced to the 4A Conference state tournament quarterfinals with a 49-26 win Friday at Glendale High School.

The Cardinals racked up 468 rushing yards on the night, led by senior running back Keyon Walker’s 24 carries for 270 yards and three touchdowns. He and dual-threat sophomore quarterback Zecheriah Owens ran behind one of Glendale’s biggest and most veteran offensive lines in team history.

“Most of these guys have started since they were sophomores, and they’re seniors now. We depend on them and we’re going to run the ball behind them,” Glendale coach Rob York said.

Glendale showed its rushing prowess early Friday, as Walker made a long run on the game’s first play from scrimmage. Minutes later, Owens kept the ball on a broken play and scored a quick touchdown run. Coconino went three and out, and Glendale marched down the field again, finishing the drive with a 45-yard touchdown run by Walker to go up 14-0 less than five minutes into the contest.

Walker finished the scoring for the first half with a 11-yard touchdown run to increase Glendale’s lead to 28-18 at halftime. Though down 10 at the break, Coconino coach Mike Lapsley said he was encouraged by the offense’s effort, following low-scoring games a few weeks prior to the playoffs.

“Especially the guys on the offensive line, they took a much bigger team and did really well at the line of scrimmage. Overall we fought, and I’m proud of that,” he said.

After halftime, the Panthers came out in their “black” offensive formation, with Clouse in for Watson as a running quarterback. They took the opening drive to Glendale’s 12-yard line, draining more than eight minutes off the clock with a series of running plays. But, with 3:42 left in the third quarter, the Panthers turned the ball over on downs, and Glendale responded with another quick touchdown drive.

Still with a chance to make a comeback early in the fourth quarter, Coconino fumbled the ball to the Cardinals on its own side of the field. The Cardinals scored on Walker’s third rushing touchdown, increasing the lead to 42-18 with just 8:15 to play.

“The turnovers kind of killed our offense. It’s one of those things where they killed the momentum, and we had a couple things where it just stalled things,” Lapsley said.

The Panthers scored their final touchdown of the game on a 15-yard touchdown pass from Watson to senior Andy Ruiz with 6:20 left, but did not recover an onside kick attempt. Widner capped off the scoring with another touchdown run for Glendale, and Coconino’s last-ditch effort to add another score failed as the game clock expired.

Glendale’s victory was just a bit sweeter than simply the chance to move on in the playoffs. Last season, after winning the Skyline Region, the Cardinals missed their last regular-season game and had to forfeit their playoff berth due to COVID-19 protocols. This postseason run for Glendale is, in part, inspired by the players who did not get their final chance to play for the program in 2020.

“I’m not going to lie, I think the staff and the kids that were on the team last year that are seniors now, and the school are still a little bitter about how everything went down. And we felt like we had a chance to make some noise last year, and we lost that chance, so we’re going to try to take advantage of everything we’ve got this year,” York said.

The loss ended Coconino’s season with a record of 5-4 (3-2 Grand Canyon), and signaled the finale for the Panthers seniors.

“Not even just this season, now it feels like in the blink of an eye these years are done, but every day was a battle to get better,” Coconino senior lineman Xavier Nakai said.

The Panthers will graduate playmakers all over the field, but still boast a young core that has shown improvement throughout the course of the season. Among them, Watson threw for 135 yards and two touchdowns in the playoff game as a sophomore, and juniors Clouse and Pierson Watson led the team in tackles this season with 46 and 45, respectively.

Though they ultimately did not compete for a title this season, the seniors believe they have made a mark on the Panthers, and that the program is in good hands moving forward.

“Most of our team is a group of underclassmen putting in that work. I don’t have any doubt that they’re going to carry this team next year,” Nakai said.

Glendale will host No. 12 Canyon Del Oro in the quarterfinals on Friday.

We all have our favorite day of the week. For the past 11 years? Mine’s been Tuesday. In a world where nothing seems reliable, steady or stabl…

Coconino boys soccer had moments of solid play Friday but ultimately fell, 5-2, to Tempe in the its season opener at Cromer Stadium.

Coconino senior running back Gabriel Callado (22) carries the ball during a first- round state tournament game at Glendale High School on Friday.