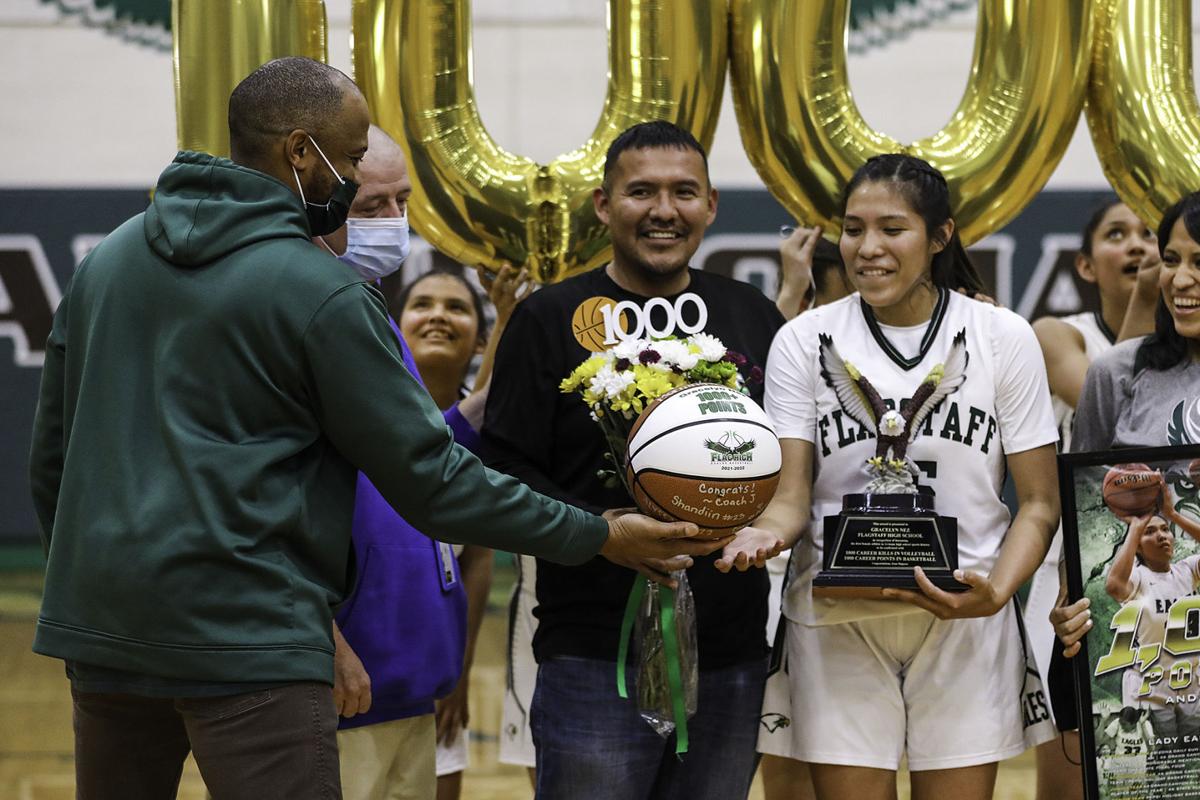 Gracelyn Nez accepts a custom basketball from her coach, Tyrone Johnson, Thursday evening in honor of the more than 1,000 points she has scored in her varsity career. Nez also recorded more than 1,000 kills in volleyball and was named the Arizona Daily Sun's Volleyball Athlete of the Year. 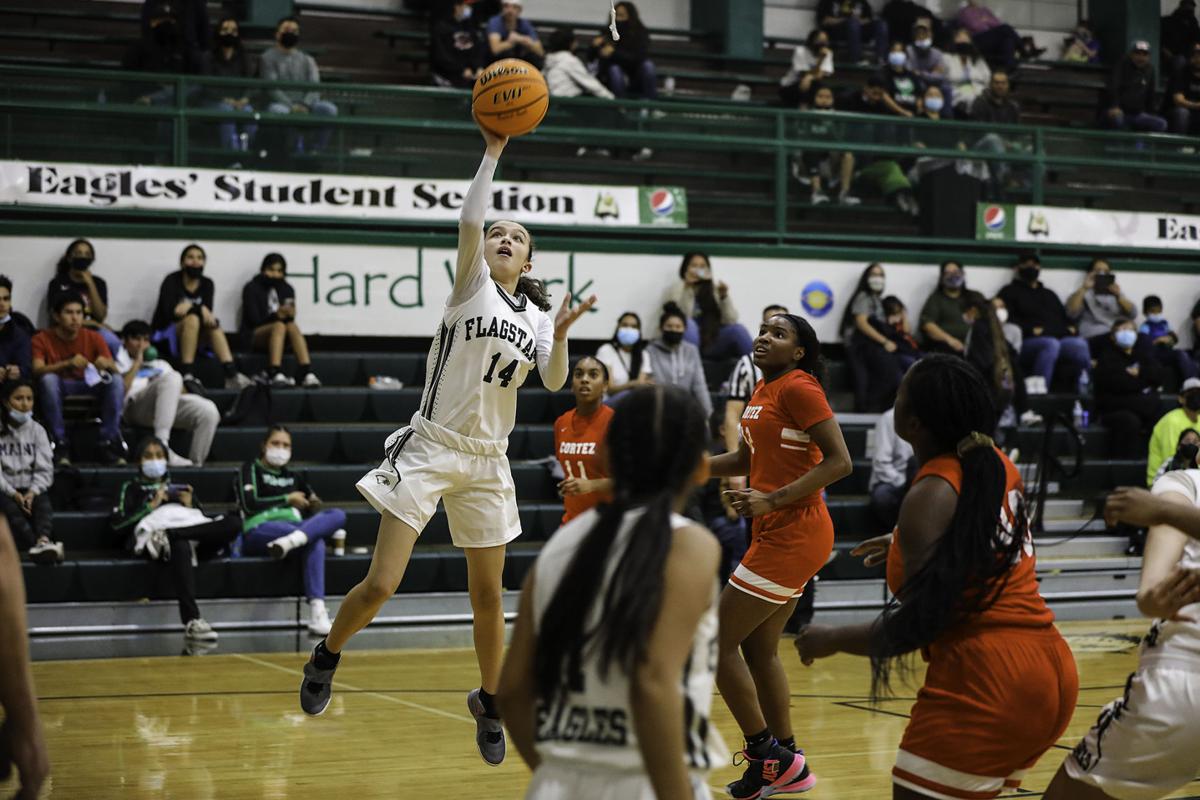 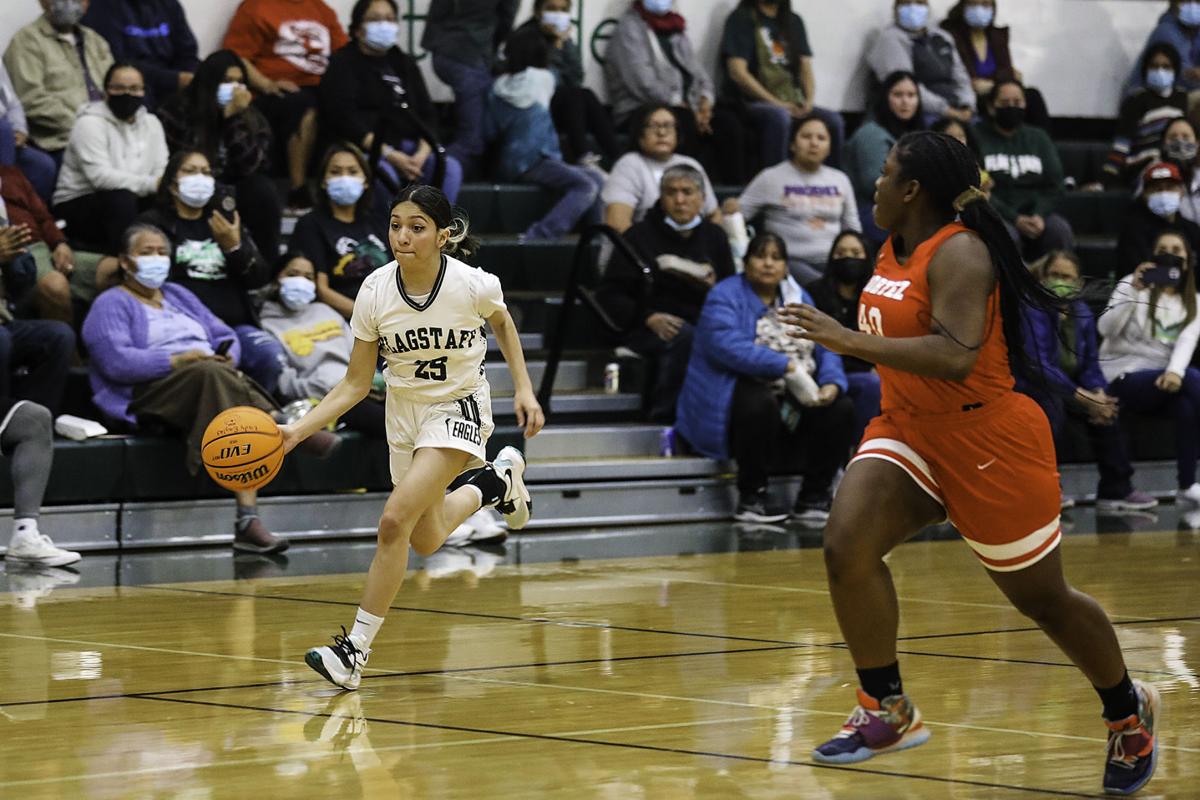 The No. 7 Flagstaff Eagles (7-1, 4-0 Grand Canyon) girls basketball team led from beginning to end Thursday in an 86-27 victory over No. 42 Cortez, notching their seventh consecutive regular-season win.

But the story of the night wasn’t the game. Flagstaff, a 4A Conference state tournament regular, has and will continue to win a lot more this season.

The real excitement was during halftime, when senior Gracelyn Nez was honored as the first girls athlete in Arizona high school sports history to notch more than 1,000 points in basketball -- an impressive achievement in itself -- but also record over 1,000 kills in volleyball.

Surrounded by teammates, coaches, family and more, Nez was given posters, balloons and two different trophies to celebrate her accomplishments on the court. Nez gave credit to just about everyone else, rather than tout her own work ethic.

“It’s an honor, and I wouldn’t have done it without my coaches. Tyrone taught me a lot about basketball. I came into high school knowing almost nothing about it. And in volleyball, Beth (Haglin) really upped my game. And then obviously my teammates and family and everyone, none of this would have happened otherwise,” Nez said after the game.

Johnson said when Nez graduates at the end of the school year, she will be remembered as one of the top athletes to come through the school. But that’s just part of what has made her great.

Against Cortez, the Eagles were without starting guards Alyssa Harris and Morningrain Honani; both were out with injuries. Several other Flagstaff players have been sidelined the past few weeks, due to COVID-19 protocols or other injuries, leaving the responsibility on others to step up and produce on the court.

And, just like they have all season, the Eagles, led by Nez, continued to play effective defense, score in transition and increase the lead. Part of what has made the Eagles so consistent, regardless of who is on the floor, is Nez’s presence.

Her effort to keep getting better has seeped over to the other Eagles, who follow her lead.

“We have to work a certain way, regardless,” Johnson said. “So she always pushes and holds herself to a higher standard -- which makes the other girls accountable to hold themselves to a higher standard. So just being able to see that and lead by example, it makes it easy for everybody to buy in.”

While the celebration on Thursday was about points, Nez’s impact has been felt more in other aspects of the game in her senior season.

“My main goal is rebounds. We don’t have a lot of big posts playing, so my goal is getting as many rebounds as I can for the team. I don’t always see myself as much as a scorer, because I don’t care as much about points, but if I get them that’s cool, too,” Nez said.

The Eagles scored in just four seconds against 42nd-ranked Cortez, and continued to roll on Thursday. Nez had a game-high 17 points, appropriate for the night’s celebration, even though she and the other starters sat most of the second half with a big lead.

Johnson said he was proud of the players’ effort, even while a bit distracted from a meaningful moment.

“You want to make sure the excitement of the night doesn’t take away from what you need to do on the court. And I felt that we came out strong, scored some quick buckets off of turnovers and everything. And that set the tone for the night, which allowed us to continue to play that way,” he said.

The Eagles are now in the top 8 of the 4A Conference rankings as they head into a slate of Grand Canyon Region games.

With Harris and Honani expected to return at some point, Flagstaff could get even better down the road. Nez would like to end her high school basketball career with a high seed, securing a home playoff game, to start a long postseason run.

“I think we can do it. We need to step up on defense and execute on offense and we’ll be good,” Nez said.

Flagstaff will host No. 6 Paradise Honors on Saturday.

Gracelyn Nez accepts a custom basketball from her coach, Tyrone Johnson, Thursday evening in honor of the more than 1,000 points she has scored in her varsity career. Nez also recorded more than 1,000 kills in volleyball and was named the Arizona Daily Sun's Volleyball Athlete of the Year. 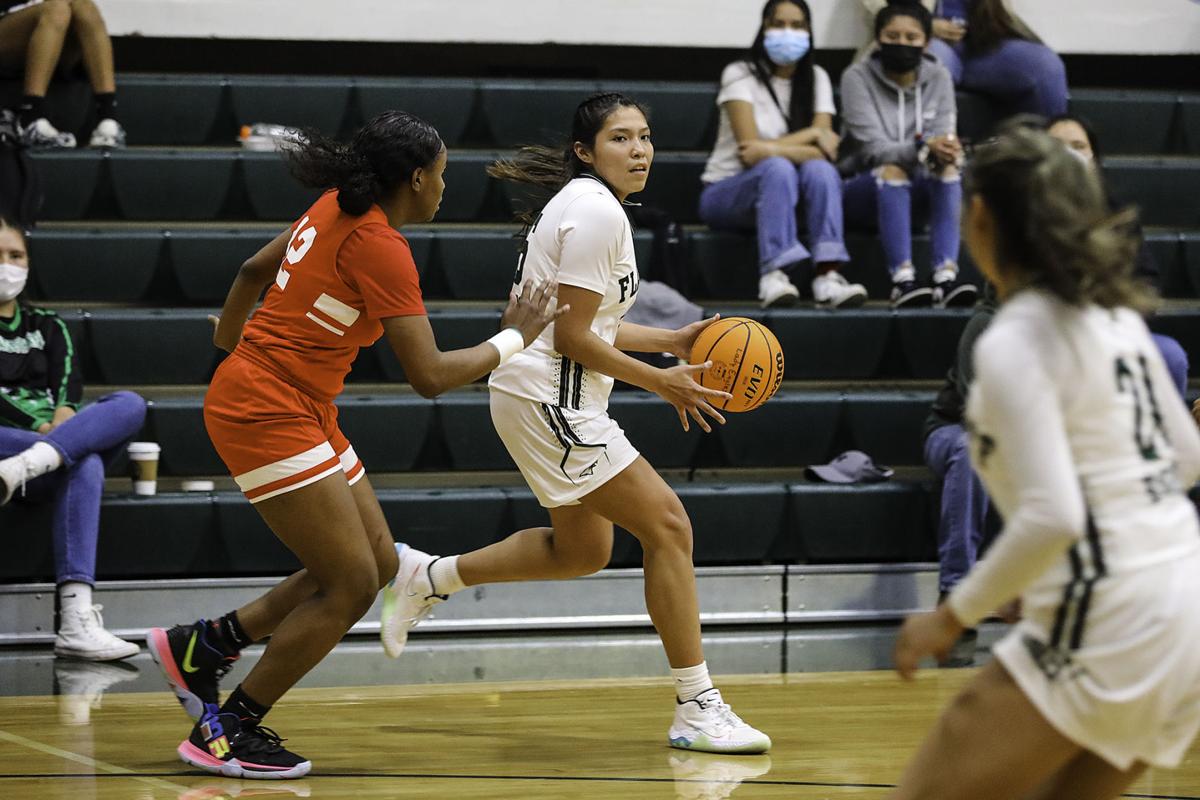 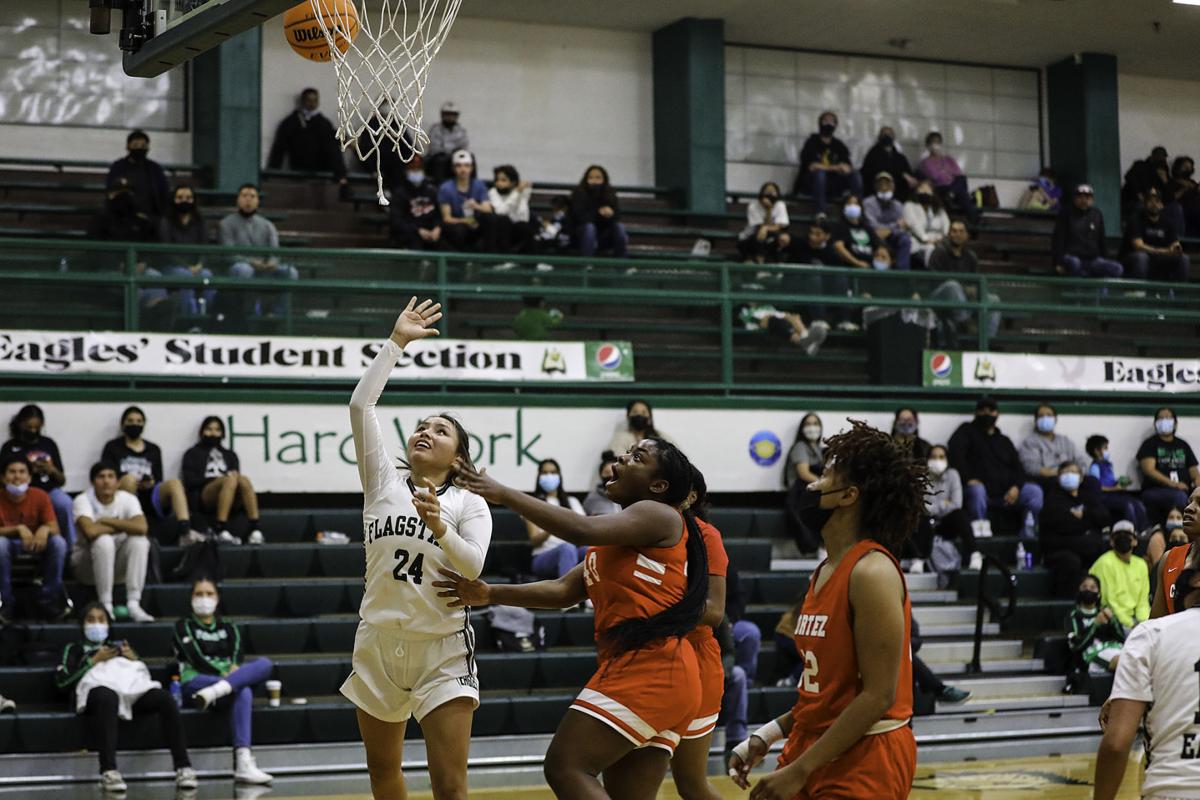 Flagstaff's Sage Begay (24) makes a basket Thursday evening during the a game against Cortez at Flagstaff High School. 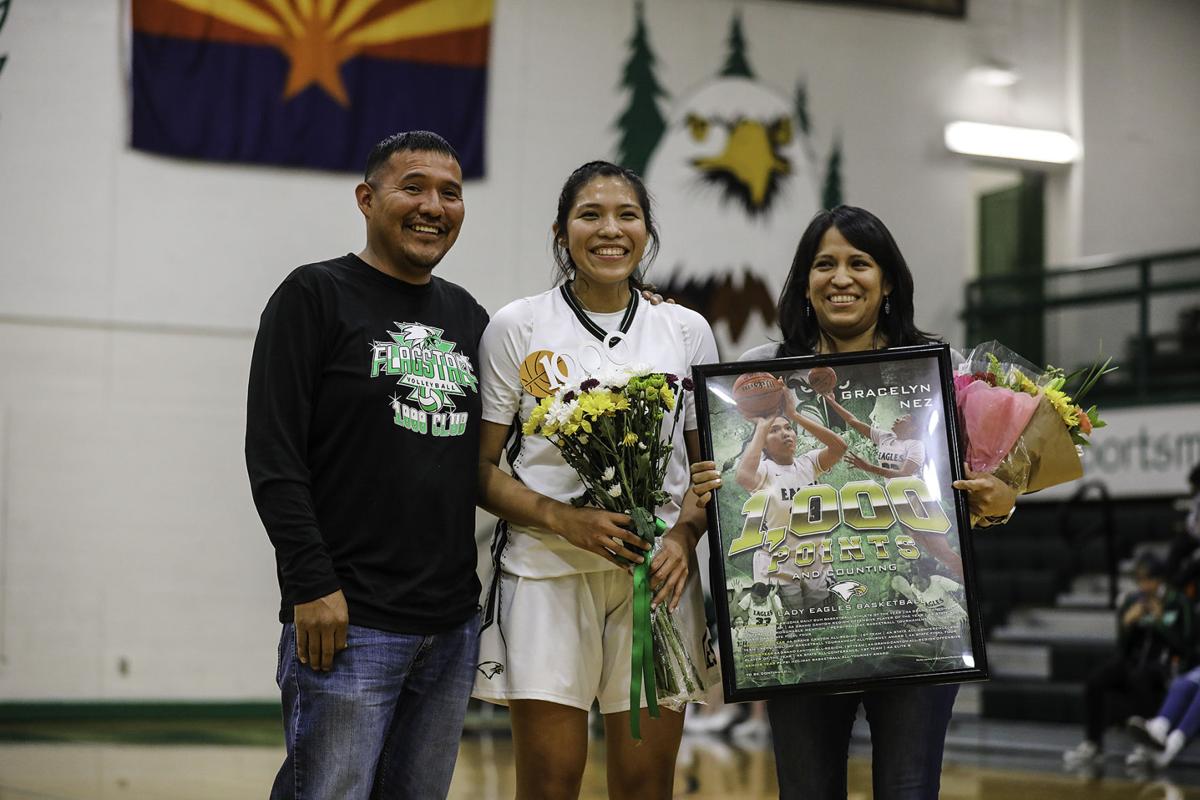 Gracelyn Nez stands in the middle of her home gym at Flagstaff High School Thursday evening with her parents. In addition to her 1,000 volleyball kills, Nez has scored 1,000 points in basketball.