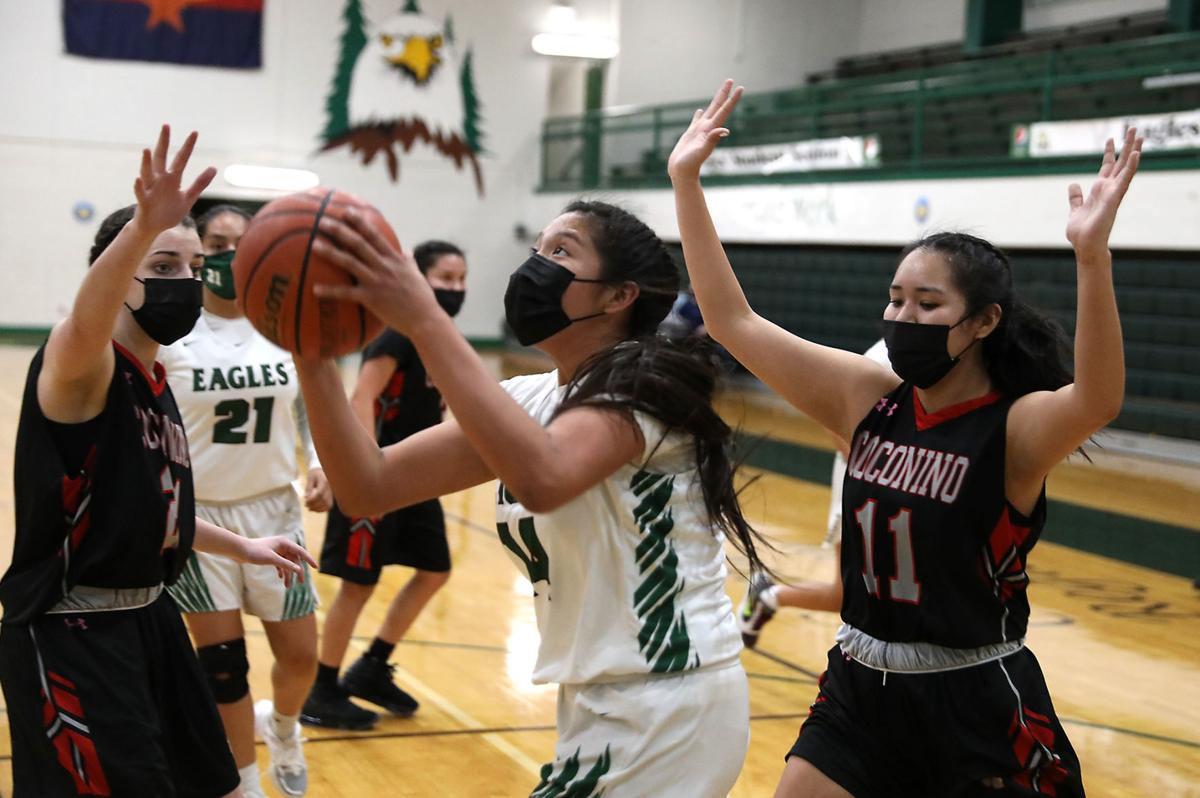 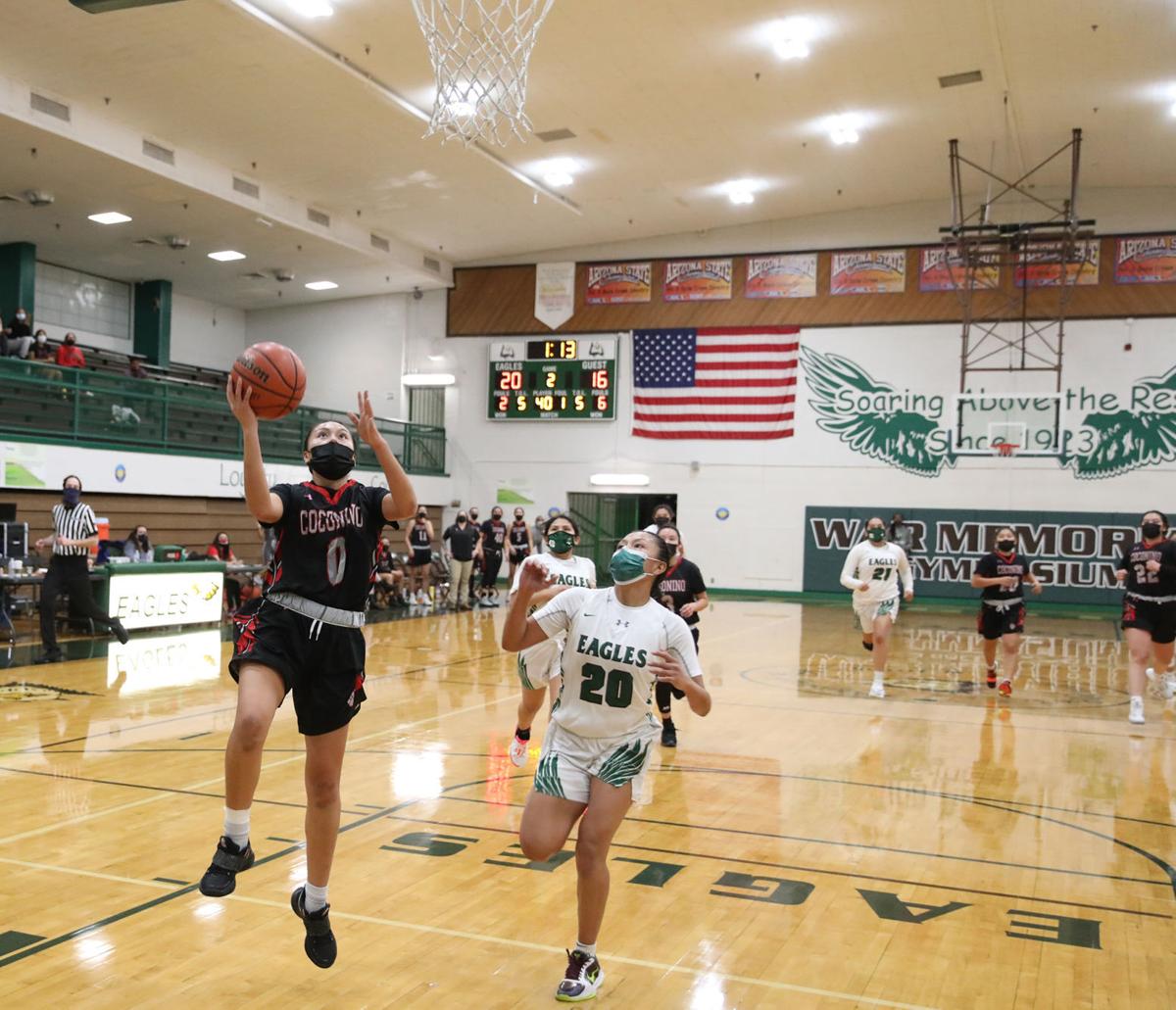 Coconino's Hannah Cody (0) goes for a breakaway layup Tuesday night during a game against Flagstaff in the War Memorial Gymnasium. 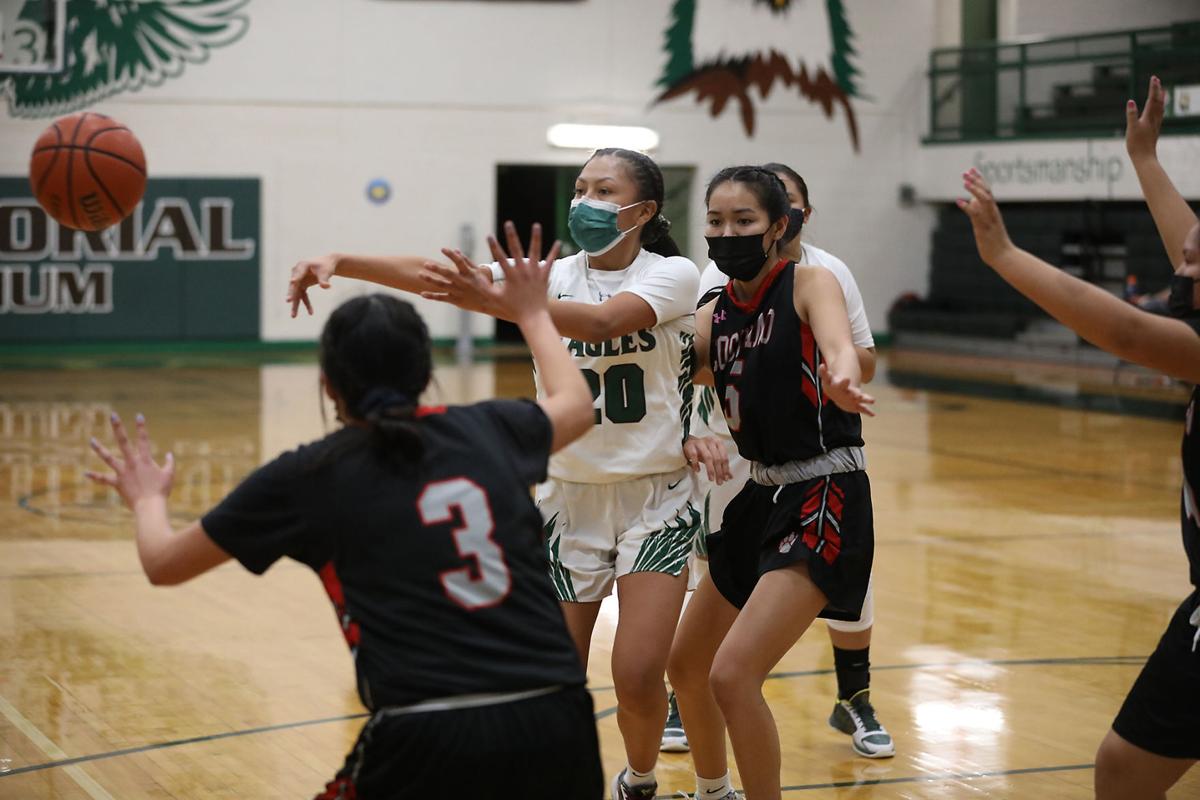 Flagstaff’s MorningRain Honani (20) makes a pass during her team's home game against Coconino Tuesday night in the War Memorial Gymnasium. 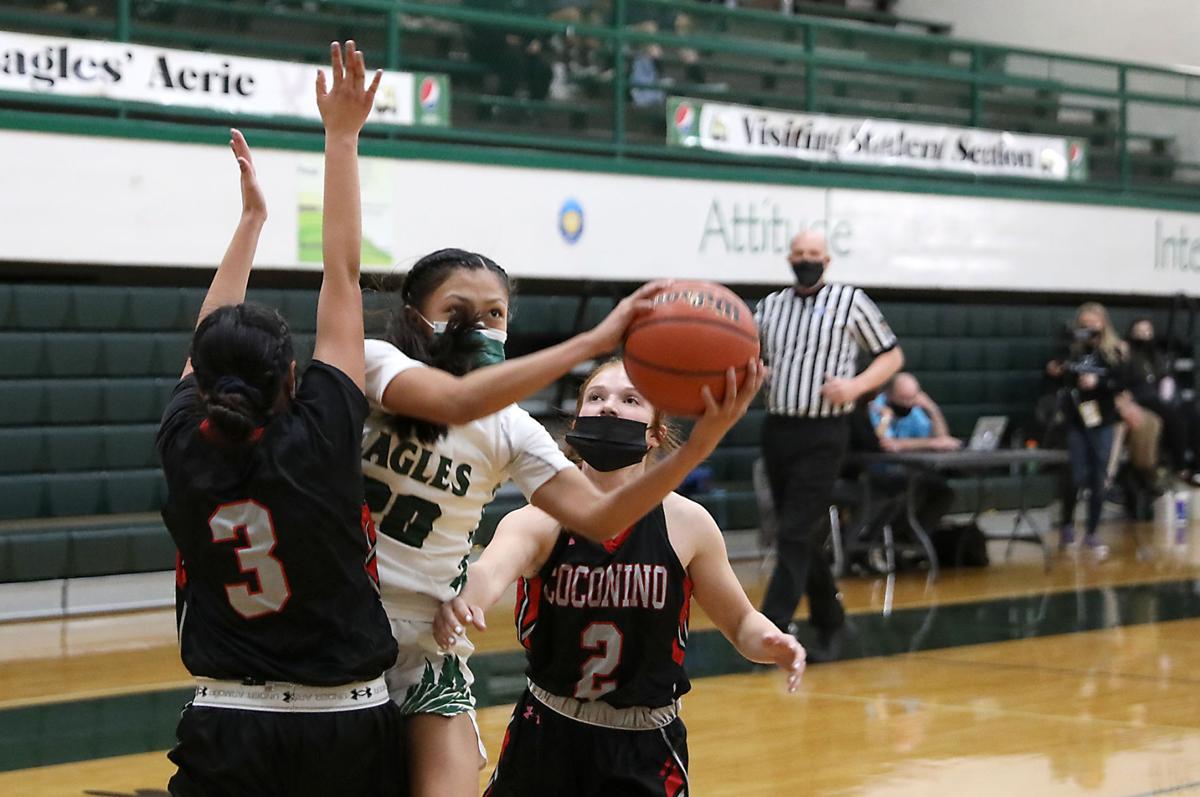 It was a bit sloppy on the hardwood. It was quieter than normal in the gym. And it was easily one of the weirdest crosstown basketball games in the history of the Flagstaff and Coconino rivalry.

The players wore masks all game, adhering to the new protocol set by the Arizona Interscholastic Association. The crowd, which was more accurately the Flagstaff and Coconino junior varsity teams sitting on opposite sides of the War Memorial Gymnasium as no parents or other students were allowed, was drowned out by the coaches and the benches throughout the game.

Even the parking lot was weird. Normally swarming with fans trying to get into the gym, there were just a few scattered cars parked in the snowy lot.

But, at the end of the day, basketball was played when it was not supposed to happen. Both Eagles head coach Tyrone Johnson and first-year Panthers head coach Cassie Schrader were relieved for that at the least.

"I'm so used to the stands being packed," Schrader said. "I think that served us well because our girls get a little intimidated by the environment and I know that. ... I thought that worked to our advantage. It was weird for me, because half the time I am the only one anyone can hear in the entire gym. ... I thought we had a great energy on the bench and that is half the battle there."

Johnson had a similar sentiment, adding that the fact the Eagles and Panthers opened the season with a way-earlier-than-normal crosstown game only added to the weird start to the winter season.

"It is just a blessing to be out here and the kids to get play," Johnson said. "To open up your season, for one, against your crosstown rival, that's always something. And two, to have the atmosphere be different -- it's not a packed house like it typically is -- you got to bring your own energy within your team and with your bench. Coconino has a new coach and new culture and new era, and they play hard to prove something.

"It was a lot going on tonight."

Flagstaff escaped a hard-fought game against Coconino with a 42-38 win, the closest the crosstown game has been since 2016-17 when JJ Nakai suited up for Coconino -- which was a 50-47 Coconino win at home.

The lack of an actual home crowd was obvious and played a bit of a factor in the Eagles' four-point win. What normally is a hostile, raucous and exciting environment felt like a summer scrimmage at times.

"In ways it really did in terms that we haven't gotten to face anybody at all yet," Johnson said. "Even our practices have been so limited."

Johnson noted that Coconino and Flagstaff were in the same predicament. The two weren't able to really practice during the winter break and, once winter sports were canceled, hit a snag before restarting practices the day after the AIA reinstated the season.

Add a lack of practice time and zero preseason scrimmages to get the legs going and a chance to play someone else and a weird crosstown game, the answer was a haphazard but competitive game.

"It definitely looked sloppy on our end," Johnson said. " ... There is a lot we have to work on and a lot of it has to do with Coco not allowing us to do our normal stuff."

Morning Honani led the Eagles in scoring with 12 points, hitting three shots from long range -- two in the first quarter and a massive jumper in the fourth quarter.

Honani took a quick swing pass with her team up on Coconino 37-36 with 2:27 to go, and splashed a trey to put Flagstaff up by four. Coconino answered immediately with a quick score by Hannah Cody to cut it down to two points.

The Panthers missed a pair of layups on a fast break, then turned the ball over on their next possession that helped the Eagles drain the clock.

Flagstaff hit a pair of free throws to seal victory after they got a second chance after missing the front end of a one-and-one with 3.7 seconds left.

Neither team led by more than six.

The Panthers were led in scoring by Mahala Long's eight, along with six apiece from Kiana Manuelito and Ashlynn Roberson.

For Schrader, coaching her first game as head coach of the Panthers in a gym she knows very well was a strange experience after being with the program for a number of years now.

"It's kinda surreal,"Schrader said. "I came out of high school not really knowing what I wanted to do with basketball. Ever since I was 19 I have been here at Coconino just working my way up. Even as a kid I've been coming to these games because my dad's a ref. ... It's surreal to be at the front of that bench. It's definitely a blessing and I was grateful to share the court with (Johnson)."

Coconino's Hannah Cody (0) goes for a breakaway layup Tuesday night during a game against Flagstaff in the War Memorial Gymnasium.

Flagstaff’s MorningRain Honani (20) makes a pass during her team's home game against Coconino Tuesday night in the War Memorial Gymnasium.