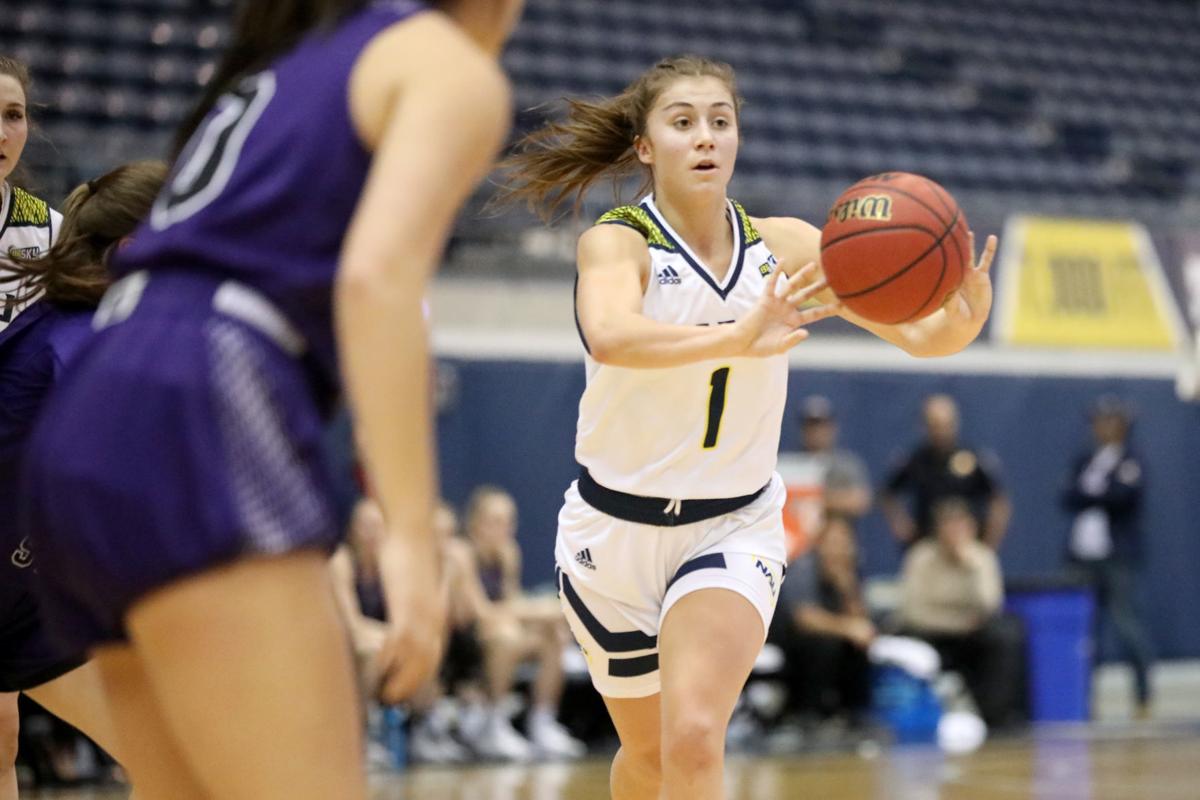 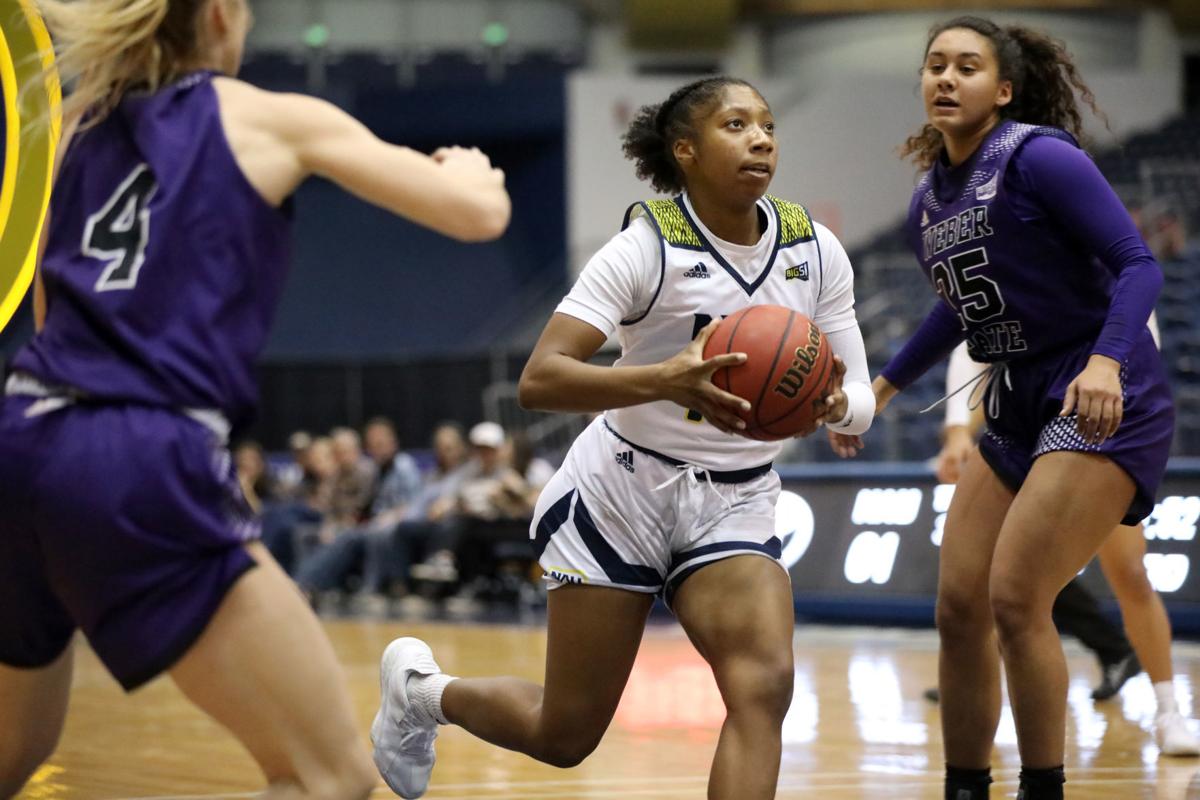 Northern Arizona forward Khiarica Rasheed (15) drives into the paint during Saturday afternoon's game against Weber State at the Walkup Skydome.

The Lumberjacks committed five turnovers alone in the fourth quarter of Thursday's disappointing loss to Idaho State at home, with the mistakes adding fuel to the visitor's rally.

So afterward, the Northern Arizona women's basketball team talked about being smart, taking care of the ball and making good decisions.

The message sank in.

Northern Arizona committed a program-low one turnover in a 92-61 rout of Weber State in the Walkup Skydome on Saturday, completing the regular-season sweep of the Wildcats in the process.

Khiarica Rasheed finished with a team-high 17 points on 6-of-13 shooting to go with 11 rebounds for the Lumberjacks, who saw 13 of the 14 total players they put on the floor add to the final point total.

“This game was about resilience and bouncing back from obviously a very tough loss on Thursday," Lumberjacks head coach Loree Payne said after the win, her team's eighth in the last 10 outings.

Northern Arizona (12-10, 9-4 Big Sky) trailed just once in the Saturday victory and used it to move into a tie for second in the conference with Idaho, which lost its Saturday home game to Montana 69-60.

Jacey Bailey drained back-to-back 3-pointers in the first quarter to spark a Lumberjacks 8-0 run that included a Regan Schenck jumper that put the host ahead 18--9 with 2:20 on the clock. Bailey finished with 14 points and four 3-pointers made and had seven rebounds, a number matched by Schenck.

“When I come off the bench, that’s my goal is to keep us going, keep the intensity high and just kinda push everybody," said Schenck, who tallied with 10 points and two steals.

“Yea, because we learned, obviously, that a 20-point lead doesn’t really matter, and I think we played a little bit pissed off today," Rasheed said. "And you know, I didn’t shoot very well tonight, but as a shooter I just kept shooting. I have to keep shooting because my team needs me to score."

Rasheed stepped into a transition 3 in the third quarter with 2:39 to go and drained the wide-open look, giving the Lumberjacks a 60-34 advantage as they went on to hand Weber State (3-19, 1-12 Big Sky) a ninth straight loss.

Northern Arizona's lone turnover didn't come until the fourth quarter, when Peyton Carroll turned it over on an offensive foul call with 6:43 remaining.

The Lumberjacks' previous mark for fewest single-game turnovers came back in 1988, when they committed just two during a game against Weber State.

Payne challenged her bench to start picking up the intensity, and Schenck provided the example. Payne said she even challenged her sophomore guard during the team's shoot-around to score 10 and commit zero turnovers on Saturday.

“We have more depth this year than we have ever had, and I felt like we were getting comfortable in our roles, and we kind of had that conversation about our reserves wanting to challenge our starters and that every day in practice, every day during a game, they should come in and want their spot," Payne said. "Obviously we are all on the same team, but we needed them to step up a little bit.”

The bench continued the Saturday theme of taking care of the ball, with the reserves heavily taking the court for the Lumberjacks in the final four minutes.

The Lumberjacks, who took their largest lead at 33 points late in the fourth quarter, even pressed for most of the day on offense. They also pressed on defense well, too.

“I think that really stemmed our transition offense and got us the easy buckets," Payne said. "And then we dialed in and got some stops, which is huge; you can run a lot better if you are getting rebounds instead of having to take the ball out.”

Nina Radford tallied 12 points, five assists and as many rebounds for the Lumberjacks, who shot 32 of 74 from the field while holding the Wildcats to a 24-of-57 shooting performance. Radford, Rasheed and Schenck led Northern Arizona's offense at halftime, with their team ahead 45-24.

Northern Arizona finished with 24 second-chance points to Weber's seven and the host's bench scored 40 points total to the visiting team's 23.

It appeared that the Thursday "wake-up call," as Payne put it, gave the Lumberjacks a jolt they needed at this point of the season.

“It could have been the best thing to us all year," Payne said of the Thursday loss and bouncing back from it with Saturday's dominate showing, "especially going into this last stretch. We need to be sharp, and if we are going to contend for a title, we have to play every game, 40 minutes and never give up whether we are up 30, or down 10 or 20 or whatever. We have to go 40 minutes the way we are capable of playing, and I don’t think we understood that until Thursday, and I think they came out today and really made that statement.”

Northern Arizona starts a two-game road stretch with Northern Colorado on Thursday at 7 p.m. and then takes on Southern Utah for a 2 p.m. Saturday tip-off.

Panthers head coach Mike Moran reminded his team about the outside noise of how hard it is to beat a team three times in a single season, let …

Coconino's play-in game against Marcos de Niza resembled a prize fight at times, the teams going blow for blow, but the hosts landed the bigge…

A return to the postseason ended in a heartbreaker for the Flagstaff Eagles boys basketball team on Friday at Rio Rico High School.

Coconino girls basketball head coach Martin Reyes has seen a bit of Dr. Jekyll and Mr. Hyde from his squad this year.

There's been a bit of a perfect storm brewing in the Coconino wrestling room, and it's led to eight Panthers qualifying for the Division III s…

Northern Arizona forward Khiarica Rasheed (15) drives into the paint during Saturday afternoon's game against Weber State at the Walkup Skydome.