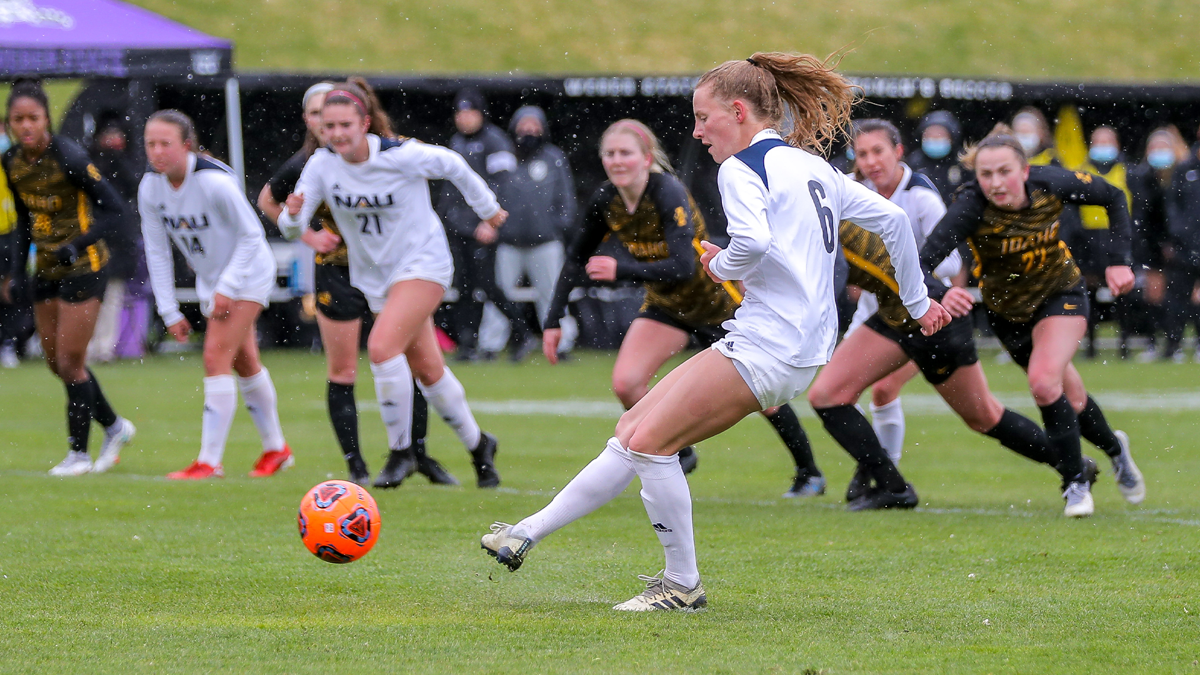 Montgomery made the best of a penalty kick, Taryn Benham finished with four crucial saves in goal and the Northern Arizona women's soccer team outlasted the Idaho Vandals, 1-0, Thursday to advance to the title round of the 2021 Big Sky Soccer Spring Conference Championship tournament in Ogden, Utah.

After the Vandals committed a handball in their own box, the Lumberjacks seized the moment and capitalized on the mistake, when their junior striker put her team, the No. 1 seed coming out of the Southeast Division, ahead in the first half with 14:51 on the clock.

NAU finished with 10 total shots taken, three on goal, and created just two corner kick opportunities, while Idaho finished with the same amount of shots, four on goal, in addition to five corners.

Maddie Shafer helped the Lumberjacks apply pressure on offense, finishing with a match-high four shots -- one on goal. Montgomery took a shot early in the game after a Vandals foul, but the attack went right. Nearly eight minutes later, she put the ball in the back of the net, finishing with three total shots and one on target.

Not long before the goal, Idaho's Jadyn Hanks was on the attack, seeing one shot get blocked at 13:10 and another sailing high just 27 seconds later.

“This has been what we’ve been going with all year -- win every game that we play. We approached today’s game the same way: This is another game that we gotta win and want to win, and that’s what got us to this place,” said Lumberjacks head coach Kylie Louw, who is taking the program into the championship round of the conference tourney for the first time since 2016 when Eastern Washington walked away with the crown.

”The championship will be a little different, but the goal remains the same,” Louw added, “to win the game.”

In the first half, Northern Arizona outshot Idaho -- which entered as the No. 2 seed out of the Northwest Division -- 8-4. The Lumberjacks, meanwhile, managed to send off just two shots in the second half.

Half of the six second-half shots by Idaho were on goal as they searched for an equalizer, forcing Benham to be a wall. With the shutout win, Benham pushed her all-time NAU record to 23.

“That’s one of the areas we’re still growing in,” Louw said. “It’s just having the confidence to come back and give the same performance we had in the first half into the second half.”

It was the first conference tournament match for freshmen Shafer, Grace Quinn and Victoria Pucci, as well as sophomore Kalea Gurfield, with the four combining for 100 minutes in the match.

“It feels great, and it’s absolutely amazing and deserving for the players. They have grinded and done everything we have asked them to do. I think today, our performance really showed that,” Louw said.

The final round will take place Saturday at 2:30 p.m. The match is free to watch on both Pluto TV channel 1050 or at WatchBigSky.com.

NAU will play the winner of the second match of the semifinals -- either the No. 1 seed of the Northwest, Montana, or the No. 2 seed from the Southeast, Northern Colorado, after that match is decided later today.

Sitting 2-0 in the conference, and 10-4 overall, the Lumberjacks previously defeated Sacramento State 6-1 and Idaho State 5-2 earlier this season. The abbreviated Big Sky schedule leaves little margin for error, as just two of the four teams qualify for the conference tournament through the three matches against one another.

Weber State (6-9) edged Idaho State 4-3 in Ogden, Utah, on April 2, but will not finish its conference schedule Saturday. Originally scheduled to face both Idaho State and Weber State on the road this past weekend, Sacramento State postponed the matches due to COVID-19 protocols within its program.

It leaves the South Division in somewhat of a holding pattern, as NAU and Weber State were originally going to complete conference play among the four schools. The Lumberjacks, however, still enter with the opportunity to finish 3-0 and avoid any potential tiebreakers for a tournament berth.

Entering the contest on a 17-match win streak against the Wildcats, the Lumberjacks will look to avoid their first loss to Weber State since 2006. The run includes four Big Sky tourney meetings with the Wildcats, three coming in the semifinals.

The teams did not meet in 2020 due to the COVID-19 cancellation, but seniors Ellie Millard and Madi Moore each hold a singles victory over the Wildcats in their careers in addition to a pair of doubles wins.

Weber State's seven-player roster includes three upperclassmen, with senior Pei-Hsuan Kuo playing at No. 1 in both the 2018 and 2019 meetings. Juniors Yunna Ukita and Megan Lombardi played No. 2 and No. 5 respectively during the 2019 matchup in Flagstaff. The Wildcats have sent out seven different doubles pairings this year.

Meanwhile, a pair of Lumberjacks enter the match with double-digit win streaks, as sophomore Mimi Bland equaled freshman Gina Dittmann's 10 straight victories last week. Bland swept her matches, playing once apiece at No. 2 and No. 3, while Dittmann's match at No. 1 did not finish before NAU clinched a victory over UTEP.

Millard has compiled a six-match win streak of her own dating back to the start of March, improving to 8-5 overall this year. Freshman Ava Neyestani enters the match still undefeated in Flagstaff, holding a 6-0 record while not dropping a set in the Aquatic and Tennis Complex this season.

Just two weeks remain before the Big Sky Conference tournament at Phoenix Tennis Center, with the semifinals scheduled for May 1 and the championship match on May 2. Fans will be allowed to attend as long as they wear masks while in the facility.