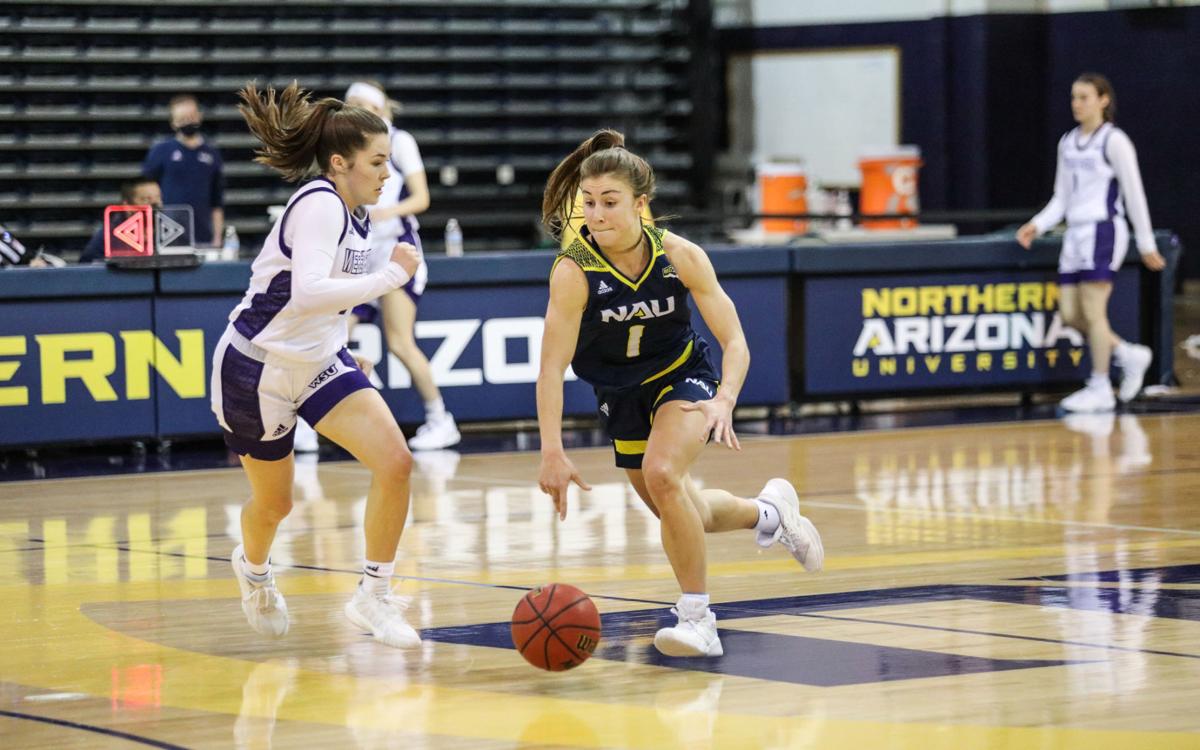 Building a double-digit lead heading into halftime, the Northern Arizona Lumberjacks played a much cleaner opening 20 minutes on Saturday afternoon against Weber State than in Thursday's match up.

Little changed across the final 20, as the Lumberjacks (11-11, 9-9 Big Sky) built up a 25-point advantage by the fourth quarter to hand the Wildcats (0-17, 0-14) an 85-68 loss in the Rolle Activity Center. Committing just six turnovers, leading to only seven points for Weber State, NAU looked much more in rhythm on the offensive end.

“The two big things that were easy fixes were spacing on offense and not turning the ball over,” Lumberjacks head coach Loree Payne said. “I think that those go hand-in-hand, if we have better spacing we don’t turn the ball over as much.”

The Lumberjacks hit just 35% from the field in the first quarter, but connected on 47.6% through the final three quarters. It’s no coincidence that NAU turned a two-point advantage after the first into 12 at halftime and then 21 heading into the fourth quarter.

Weber State took a four-point lead about eight minutes into the game after Ashley Thoms drilled a pair of 3-pointers, but Regan Schenck and Jacey Bailey answered with four points apiece to close out the opening quarter and retake the lead at 18-16.

Schenck and Bailey eventually set a few milestones during the contest. Bailey’s free throws near the end of the first allowed her to reach 1,000 for her career, the 19th Lumberjack to hit the mark in her career, as she went on to finish with 11 in the game.

“Coming into the game, I didn’t know I was seven points away from 1,000,” said Bailey, who added nine rebounds, four assists and four steals to her final line. “I didn’t realize until I was coming off the court and everyone was telling me. It was pretty exciting afterwards.”

Meanwhile, Schenck scored 15 points in a truly dominant third quarter as she reset her career high once again at 31 points for the afternoon.

“In my opinion she is an all-conference player, no doubt. She’s the X-factor for us,” Payne said. “The kid can absolutely score, she is incredibly fast and is one of the best defenders in the league. She has really come into her own.”

For every two points the Wildcats scored in the third quarter, it seemed as though the Lumberjacks answered with four of their own.

After Daryn Hickok opened the second half with a layup, NAU rattled off seven straight points on a jumper by Schenck, a 3 from JJ Nakai and a layup off the hands of Rasheed.

A small run from Weber State temporarily trimmed the lead back down to leading by 17, but four points from Schenck and a layup by Nakai erased the progress the Wildcats had made. Already with six in the quarter, Schenck then put up a basket per minute through the final four minutes of the quarter.

Two final baskets in the fourth quarter allowed Schenck to reach 31 points, adding five rebounds and five assists, as the Lumberjacks hit their largest lead of the night, 73-48, with 8:33 remaining.

Nakai joined Bailey and Schenck in double digits with 10 while 10 different Lumberjacks got on the board in the game. Rasheed finished with eight points and matched the team-high of nine rebounds, while Ajai Simmons connected on her first career three-pointer as a Lumberjack, Sanjana Ramesh came away with a putback basket and Sentia Bryant found Oliva Moran for a basket under the basket in the final few minutes of the game.

Currently seventh in the Big Sky with their .500 record of 9-9, the Lumberjacks could still move into the conference’s top five and avoid playing on the first day of the conference tournament.

Now at six straight home wins, NAU heads into its final week of the regular season with one last contest in Flagstaff before heading north as it faces the Southern Utah Thunderbirds for a home-and-road series.

“Last weekend was really tough, losing two really close games that I feel like we should have gotten,” Payne said. “We have a really good team in Southern Utah coming in here. For us, we need to focus on keeping our home win streak alive right now, taking care of business here on Thursday against them and then we have to figure out how to win on the road. We haven’t won on the road since Eastern, and that was back in December."

Thursday tipoff is scheduled for 6 p.m., with the teams then traveling to Cedar City for a 2 p.m. start on Saturday.

For the second game in a row, the Northern Arizona men’s basketball team hung tough with Weber State, but a big run in the first half proved decisive in a 74-52 loss on Saturday.

Luke Avdalovic led the Lumberjacks (5-13, 4-8 Big Sky) with 16 points – one shy of his season high – and was the only player to score in double figures.

“We absolutely played better (than Thursday) all the way around, but we just had problems putting the ball in the basket; we had some good looks,” Lumberjacks head coach Shane Burcar said. “Weber State is a really good team ... and we had some breakdowns. At the end of the day, we’re heading in the right direction and I liked how we competed today.”

The Lumberjacks got off to a slow start as the Wildcats held a 13-4 lead before a 7-0 NAU run brought the Lumberjacks right back into the game. A deep 3 by Avdalovic, who scored 10 of his 16 points in the first half, cut the Wildcat lead to 13-11 with 11:24 before the half.

After Weber State pushed its lead back out to six, NAU once again cut the deficit to a single possession, 25-23, following consecutive buckets by Carter Mahaney and Isaiah Lewis. However, the Wildcats used a 7-0 run in the final 3:46 of the first half to take a 32-23 halftime lead.

Despite offensive struggles, the Lumberjacks weren't totally out of range when Nik Mains knocked down a trey to make it 56-42 at the 8:44 mark. But five consecutive missed shots and three turnovers in a four-minute stretch aided a 13-0 Wildcat run that put the game out of reach.

After connecting on 18 3-pointers on Thursday, Weber State was 8 of 22 from long distance on Saturday. The Wildcats’ balanced scoring with five players in double figures was more than enough to dispatch the Lumberjacks and complete the weekend home sweep in the Dee Events Center.

Avdalovic, who accounted for two of NAU’s four 3-pointers, moved into sole possession of eighth all-time in made 3-pointers in school history finishing the game with 153 career makes.

Just one week remains for NAU before the conference tournament as the Lumberjacks will face Southern Utah next week in a home-and-home series.

NAU and Southern Utah will get the week started on Wednesday at 6 p.m. in Cedar City, Utah before the Lumberjacks’ regular season finale in the Rolle Activity Center next Friday at 5 p.m.