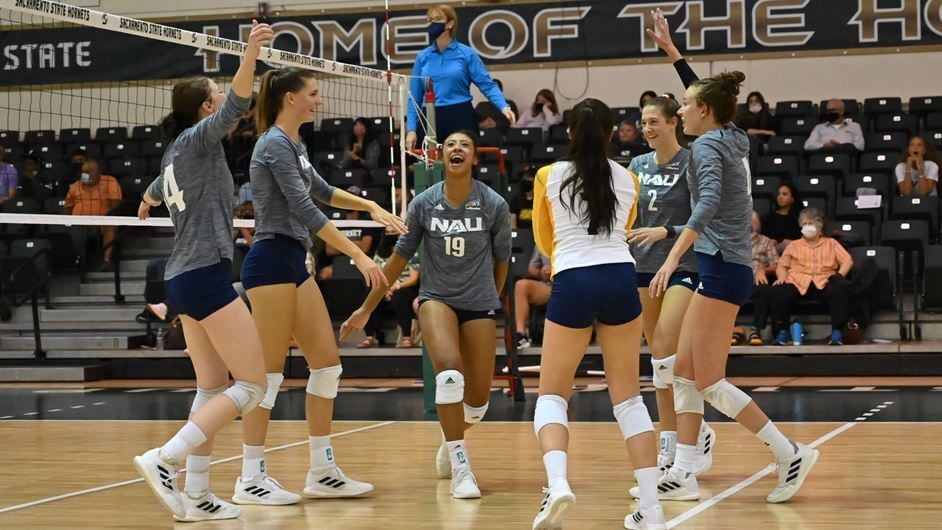 Morgan Gappmayer’s cut shot found the floor, and just like that, the Northern Arizona volleyball team’s 10-year nightmare in The Nest came to an end.

The Lumberjacks snapped an eight-match losing streak to the Sacramento State Hornets on their home floor Thursday night in sweeping fashion, 25-20, 26-24, 25-15.

Holding the Hornets to a .100 hitting percentage, the Lumberjacks, now victorious in four of their last five matches, got back into the win column, moving to 4-1 in the Big Sky Conference and 6-8 overall.

“We were in control of the whole match and that was the big difference,” Lumberjacks head coach Ken Murphy said. “Even in the second set when it was close, our defense was locked in. Offensively, I especially liked that we got our rights and middles the ball a little more and they converted some big points for us, but mainly I really liked the way we played defense tonight and put pressure on them from start to finish.”

Prior to Thursday, Northern Arizona had not defeated Sacramento State in The Nest since a five-set win in 2011. The victory was just the Lumberjacks’ second all-time win in Sacramento over the Hornets in 27 meetings.

To vanquish the horrors of The Nest, Northern Arizona relied on a locked-in defense that put an exclamation point on the night by allowing just five Sacramento State kills in the final set. Behind a season-high 18 digs from sophomore Millie O’Ketter, the Lumberjacks dug up more balls than Sacramento State, 54-46, and held a 10-6 block advantage.

Junior Taylor Jacobsen, who led the Lumberjacks with nine kills, had the hot hand in the opening set, putting down five kills and adding two aces. A 4-0 run gave Northern Arizona the lead for good in the first set at 8-6, although it was a late four-point spurt that put away the Hornets.

Featuring 10 ties and four lead changes in the second set, both teams ramped up their offensive output, with Northern Arizona hitting .275 and Sacramento State hitting .263.

Having snatched any potential Sacramento State momentum, Northern Arizona ran away with the third set from the opening serve. Bloom and Jacobsen turned back the Hornets’ initial swing, putting into motion a 9-0 game-opening run. Jacobsen logged three aces in the run, increasing her match total to a career-high five.

“In the second set, Sacramento State hit a little bit of a higher number and I thought we let some things get away from us,” Murphy said. “For us to pull that set out was really important, and heading into the third you could see that our team was determined to play a little better on our side of net and get back to the things we did well in the first set. They went out and did that from start to finish.”

Northern Arizona will travel to Portland State for a road match on Saturday.

After battling through a three-set match against the 59th-ranked player in the nation, sophomore Gina Dittmann’s run at the ITA Women’s All-American Championships in Mt. Pleasant, South Carolina, came to an end Friday morning.

Facing off with Pepperdine’s Shiori Fukuda, Dittmann bounced back from a 6-3 first-set loss with a 6-3 victory of her own to force the deciding set. Playing for the third time in as many days against a nationally ranked opponent, Dittmann fell 6-2 in the final set to the sixth-year senior.

Ranked No. 85 to open the 2021-22 season, the highest ranking of her young career, Dittmann’s first appearance at the All-American Championships included a straight-set victory over Washington’s fifth-year senior Vanessa Wong, ranked No. 14 in the nation, and a match against Iowa’s Alexa Noel.

The fall season continues on Oct. 13 at the ITA Mountain Regionals in Las Vegas. The tournament begins on Wednesday and runs through Sunday, Oct. 17.