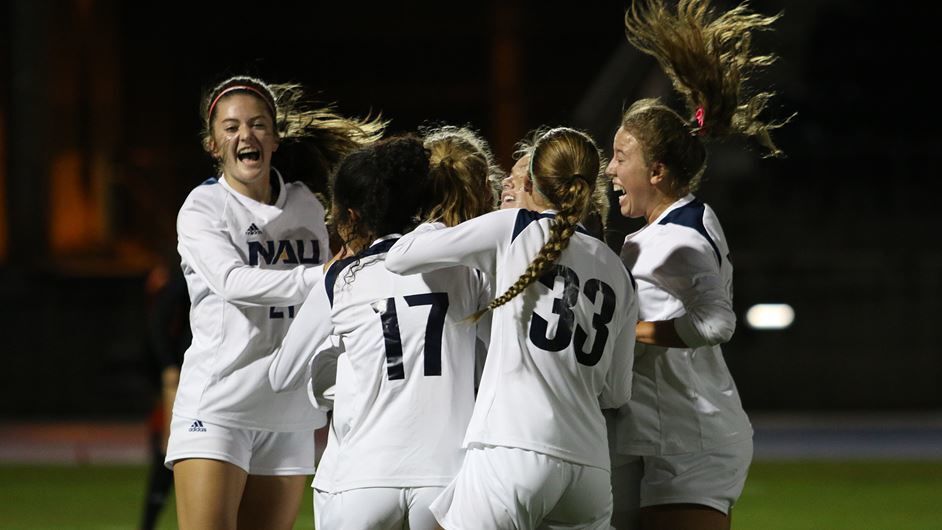 Northern Arizona soccer celebrates in its home win over Weber State on Friday.

Northern Arizona started off strong, with its first goal coming in the seventh minute of the home match. Forward Madison Montgomery challenged the Wildcats goalkeeper, and scored on the first shot on goal of the night. Montgomery caught a long boot from Kylie Kapustka right inside the goal box, scoring her fifth goal of the season.

Mikhail Johnson recorded her first goal as a Lumberjack in the 43rd minute. Montgomery took a corner from the right, and Johnson stepped up through four Weber State defenders and scored her team's second goal off of a header.

Coming out of halftime, the Lumberjacks did not slow down.  Sam Larberg scored on a rebound. Just 90 seconds later, Larberg scored again, to total four goals on the season.

"We've been building the whole season and I really think it's starting to pay off. We can see that believing in each other and fighting to the end is what's working for us and that's what's winning us games. It won us a game last weekend and now again today, and I think that we just keep building on that, and we do it together and we're going to go pretty far this season," Larberg said.

In the 88th minute of the match, Weber State's Morgan Furmaniak drew a penalty kick and scored the Wildcats' only goal of the night in the bottom left of the net.

"If you watch our team play, you see how we fight and grind. Midseason we lost our way, and this is just pure comeback from our team. Everybody gave their best and that's what we ask for. We ask them to compete and give effort and that's exactly what they did. I really couldn't be happier, we scored goals from pure commitment to winning this game," Lumberjacks head coach Kylie Louw said.

The Lumberjacks will return to Lumberjack Stadium on Sunday for a match against the Idaho State Bengals.

Northern Arizona soccer celebrates in its home win over Weber State on Friday.