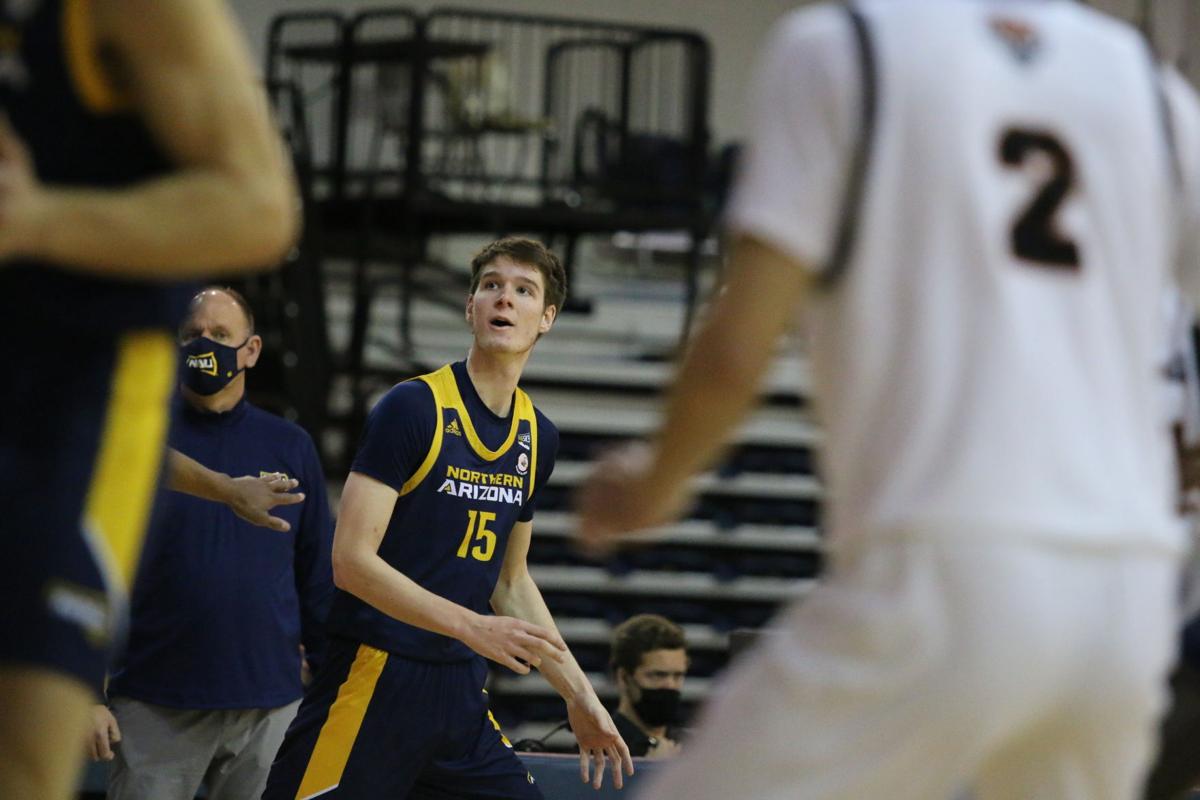 Northern Arizona forward Nik Mains watches a shot go up during a game against Idaho State on Jan. 9 in the Rolle Activity Center.

But Saturday was different, and the Lumberjacks actually completed a comeback.

The Lumberjacks chipped away at a 34-19 halftime deficit until cutting it down to 45-44 at the 11:36 mark of the second half after a 14-4 run. Montana answered with a 13-6 spurt, which looked like it might squash the Lumberjacks' comeback attempt.

When: Thursday's tip is scheduled for 6 p.m., Saturday at noon.

So how did the Lumberjacks pull off their biggest comeback win since 2011? Defense, plus a key player back from injury, played into the long-shot victory.

"I don't have that answer, but we sure are trying to figure that out," Lumberjacks head coach Shane Burcar said during his Tuesday media availability over Zoom. "Another thing too, not having a consistent starting lineup has hurt us the last several games. We are still trying to find ourselves."

Nik Mains -- a 42% 3-point shooter and 6-foot-9 big -- returned after missing the Thursday game due to injury, and came up big with a career-high 17 points, 12 in the second half, and he hit the 3-pointer that put Northern Arizona within one with 2:57 left before the Lumberjacks took the lead for good.

"I think what changed (between Thursday and Saturday) is we made more shots," Burcar said. "Nik was a big part of that. Not having Nik or Luke (Avdalovic) on Thursday night was part of it. ... We aren't experienced enough to overcome that quite yet. We'll get there but right now we aren't there. There's no shame in that. ... Lot of people talk about it, and it is lip service, but I think we have a strong belief in our culture."

Just the simple addition of Mains made a world of difference for the Lumberjacks, as the team had more space on offense as Mains pulled the Montana bigs away from the bucket -- stretching out one of the best defenses in the Big Sky.

It also took pressure off young Lumberjacks who were thrust into more minutes.

"It lifts the team, too," Burcar said of Mains getting back into the lineup. " ... The younger guys, as much as they say they want to play, they may not be ready for it yet. Total respect for the younger guys, but maybe they aren't ready to play 20 to 25 minutes right now."

Now, Montana isn't the best team. In fact, the Grizzlies are having a down year by their standards at just 6-7 overall and 2-4 in the Big Sky. But just beating the Grizzlies is a milestone for the Lumberjacks.

The Lumberjacks dropped three straight before the Saturday win -- losing twice against Idaho State and once to Montana -- right after the Lumberjacks swept a road trip at Idaho.

Burcar thought the Lumberjacks had something going following the Idaho wins. The rotation was locked in with 3-point shooters Mains, Avdalovic and Keith Haymon getting key minutes together to open the floor for Big Sky-leading scorer Cameron Shelton and Carson Towt.

Then the injury bug hit against Idaho State. Avdalovic, who missed the last three games, suffered a concussion a minute into the first Idaho State match-up and then Mains went down the following Saturday near the end of the game.

Those injuries took a toll.

"I do think it makes a difference," Burcar said of getting back to full strength.

The injuries aren't the only reason for the deficits, just a big factor. Little offensive flow and a lack of execution played into the issues. Avdalovic remains day-to-day but his return could light a spark for a struggling offense.

The Lumberjacks, according to KenPom.com, play one of the slowest paces in the NCAA.

According to KenPom, the Lumberjacks' tempo is 64.4, meaning the Lumberjacks get just 64 possessions per 40 minutes of basketball. That is one of the lowest marks in the NCAA at 344 and last in the Big Sky. The Lumberjacks are also pretty low in average possession length at 19.3 seconds, as the team as struggled with finding early looks and settling for late shot clock heaves.

The stats paint a picture of a slow-paced team that plays almost old-style basketball. But Burcar thinks the numbers are a bit misleading considering the Lumberjacks are allowing teams to shoot 40% from deep (332 in Division I basketball) and 60.6% inside the arc (344 in D-I out of 347 teams).

"When we are taking the ball out of the basket all of the time, it is hard to have tempo," Burcar said. "We want to go fast but intelligent at the same time."

Burcar noted points per possession as well, which the Lumberjacks are at 99.9 points per 100 possessions -- right around the D-I average.

No fans in the stands

Northern Arizona athletic events won't have any fans in the near future, the school announced Wednesday. In a press release, Northern Arizona Athletics said all sports will continue to take place without fans due to the COVID-19 pandemic.

Football remains to be determined and will be announced at a later date.

The Lumberjacks host upstart Montana State (7-3, 4-0 Big Sky) this week with games at Thursday at 6 p.m. and Saturday at noon in the Rolle Activity Center.

Down, but never out, the Northern Arizona men’s basketball team rallied for a 62-58 come-from-behind road win over Montana on Saturday to snap…

Northern Arizona forward Nik Mains watches a shot go up during a game against Idaho State on Jan. 9 in the Rolle Activity Center.