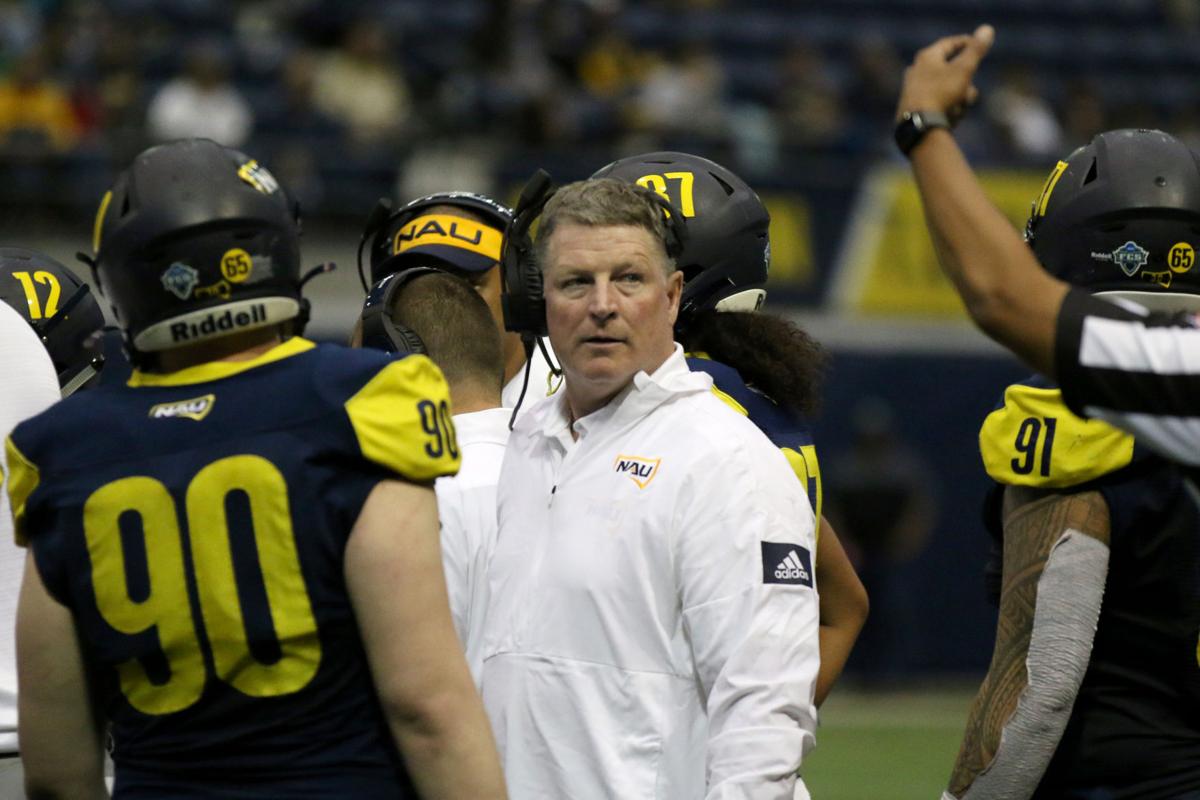 Northern Arizona head coach Chris Ball looks on during a timeout from last season's Homecoming game against Portland State at the Walkup Skydome.

The outlook of the 2020 college football season feels like it changes by the day, but even so Northern Arizona is slated to start fall camp Wednesday.

The Pac-12, ACC, SEC and the Big Ten have all elected to go conference-only for football, while six of the 13 FCS conferences have delayed or canceled the fall sports season entirely as the season is set to look unlike any other if it happens.

The Big Sky Conference decided to forego a definitive decision during its pre-recorded Virtual Media Days just over a week ago, with the conference straying away from COVID-19 for the most part. Some coaches elected to share their thoughts, many across the board, but still some opinions were given.

As of Friday, 3% of student-athletes currently on campus at Northern Arizona have tested positive for COVID-19 -- but the exact numbers were not released by the school.

While cases of COVID-19 -- and what schools are reporting or not reporting  in terms of cases -- vary around the Big Sky, which spans eight states across the western United States, the conference announced this past week on social media that it will reconvene sometime next week after the NCAA Board of Governors meet Tuesday.

The Tuesday meeting should shine a light on what the NCAA plans to do about the FCS playoffs -- whether postpone, hold it or outright cancel it. If there isn't a playoff at all, schools would be forced to decide to play for no title, or just not at all.

The meeting is also the day before Northern Arizona football is set to start fall camp. The Lumberjacks don't have to start that day because the NCAA allows teams to 29 days before their first game. As of now, Northern Arizona's first game is at home Sept. 12 against South Dakota out of the Missouri Valley Conference -- which hasn't made a definitive decision either.

As of press time Northern Arizona football has not released any of its plans, or may not have any plans finalized, for how fall camp will look. Most likely, the practices will be closed to the public and potentially media to avoid contact with non-team personnel and try to abide by CDC guidelines as much as a football team can.

No one knows how the season will look, if it happens at all. The Lumberjacks already lost their opener against Arizona State, along with the $518,186 game check that was supposed to come with it, and there could be more financial ramifications for the department if football is affected further.

The Lumberjacks went 4-8 overall and 2-6 in the Big Sky in Ball's first year with the program in 2019. Heading into this season, the Lumberjacks were picked ninth in the preseason media poll and seventh in the coaches' poll a year after finishing ninth.

Here are two of the more interesting non-COVID-19 related storylines to keep an eye on ahead of Northern Arizona football's fall camp and the potential season:

The Lumberjacks arguably have one of the best wide receiver groups in the Big Sky -- and maybe even the FCS -- between Brandon Porter, Hendrix Johnson and Stacy Chukwumezie.

But there is a massive question: Who will be throwing them the ball?

Replacing Case Cookus, who rewrote the Lumberjacks record books as a passer, is always going to be a daunting task. Expecting his successor to be close to as good would mean production of at least 3,000 passing yards and a hyper-efficient touchdown-to-interception ratio among other dominance from the spot.

Unlike the past few years when the likes of Blake Kemp (East Carolina), Daniel Bridge-Gadd (Washington) and Keondre Wudtee (Oklahoma State) transferred down from the FBS, the Lumberjacks stayed quiet in the transfer market at quarterback this year. There were rumors that Bridge-Gadd could make a return after he left the program following a season-ending knee injury in 2018, but he is nowhere to be found on the roster.

Wudtee and Heath Beemiller are the two most experienced quarterbacks for Northern Arizona, along with some young slingers in Jeff Widener, Trevor Messing, Dawson McPeak and Niko Haen. However, the two players who have the most passing experience in the Lumberjacks blue and gold aren’t even quarterbacks.

Tight end Gino Campiotti and Porter have the most passing attempts among all returning Lumberjacks at 47 and 34, while Beemiller has just 15 and Wudtee with two attempts.

While the offense was dynamic at times at second in the Big Sky in points per game at 37.2 and tops in passing yardage, the defense lagged behind big time.

The defense was hit hard and often by injuries in 2019.

For the bulk of the back half of the season, the defense was forced to go down to players who really didn't have much playing experience at the college level, or just Northern Arizona. Being down so many left the defense flipping players from the offense, such as Nate Perkins from wide out and Jacob Mpungi from running back to defensive back.

The defense finished last in the Big Sky with 41.3 points allowed per game, 12th in rushing touchdowns allowed (34), last in passing yards (312.1), last in average yards passing completion (8.8) and allowed quarterbacks to complete 65.3% of their passes while getting just seven interceptions all season.

The top four teams in the Big Sky last year, Sacramento State, Weber State, Montana and Montana State -- all playoff teams -- also happened to finish in the top four of the fewest points allowed per game within the conference.

The team returns key players like Anthony Sweeney, who led the way in total tackles despite missing two games, in the backfield and Carson Taylor -- who led the team in QB hurries and sacks -- on the defensive line, along with a number of young players who developed from the early snaps last year such as Eloi Kwete and Brooklyn Hardiman.

Seasoned seniors Brandon Lawless and Tristen Vance are expected to be healthy after missing out on much of 2019, giving a needed experience boost to the defense.

NAZ Elite This Week: As team gets back into heavy training, races on the horizon

Northern Arizona head coach Chris Ball looks on during a timeout from last season's Homecoming game against Portland State at the Walkup Skydome.