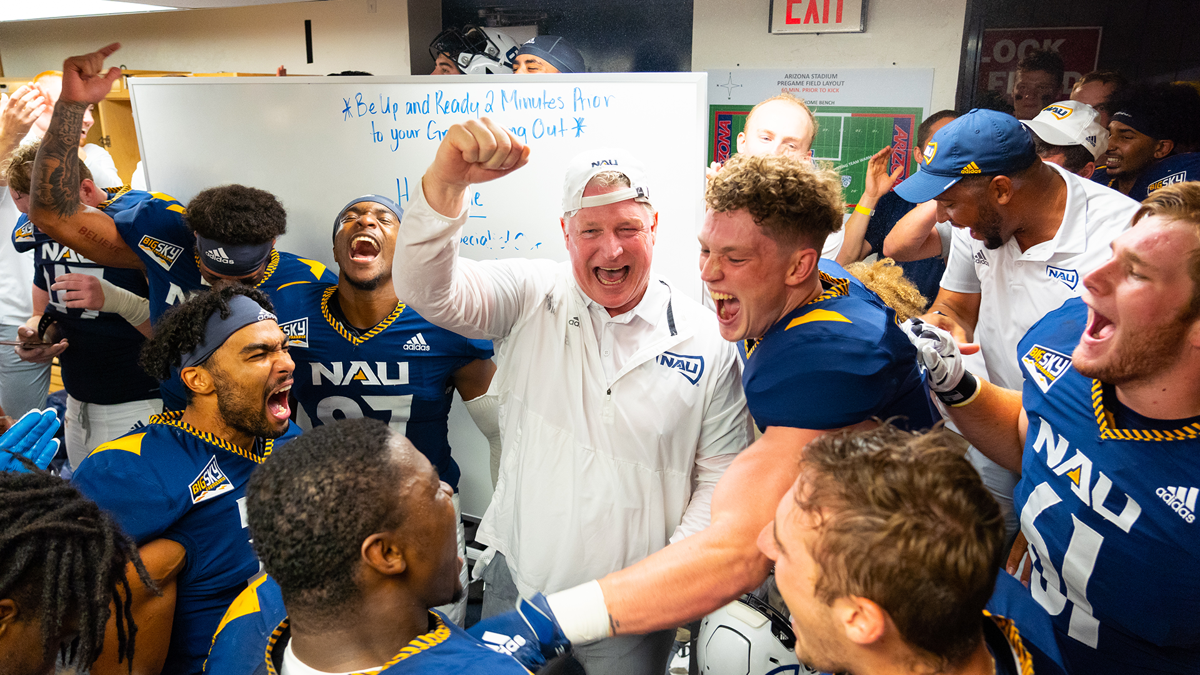 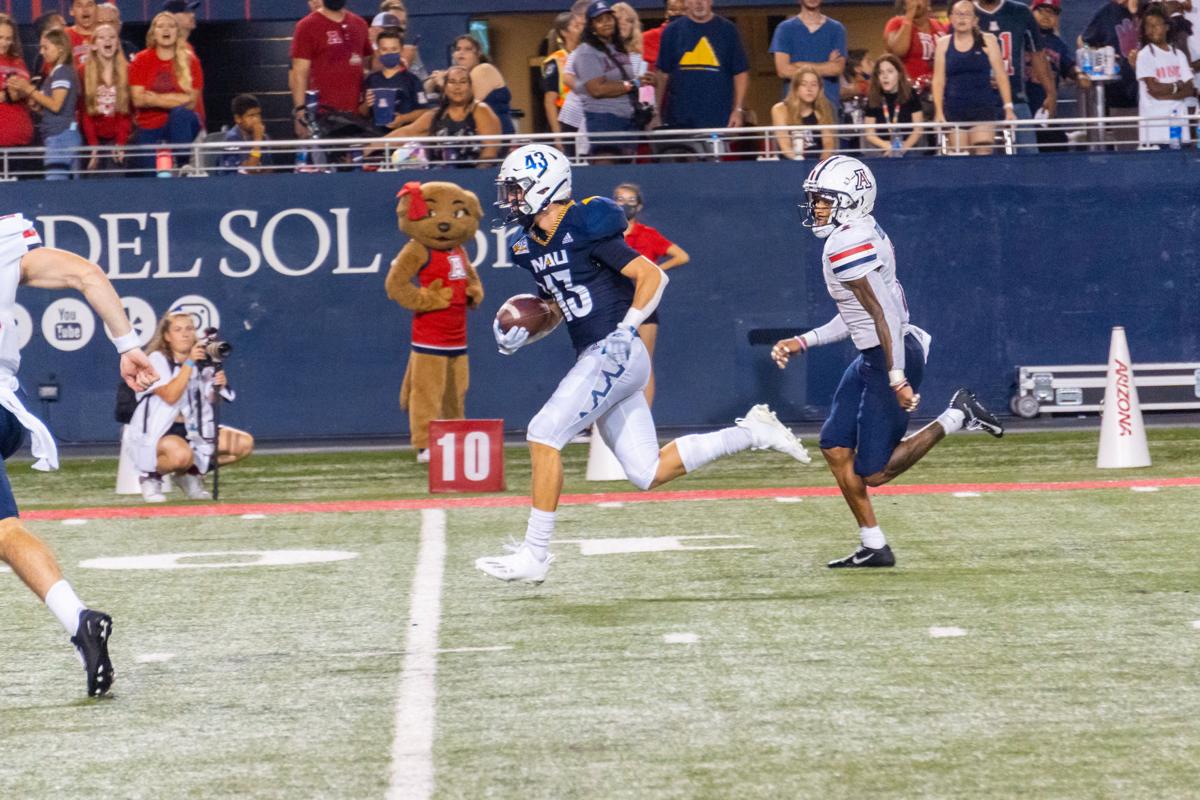 Northern Arizona defensive back Brady Shough (43) runs back an interception for a touchdown in the Lumberjacks' game against Arizona Saturday in Tucson. 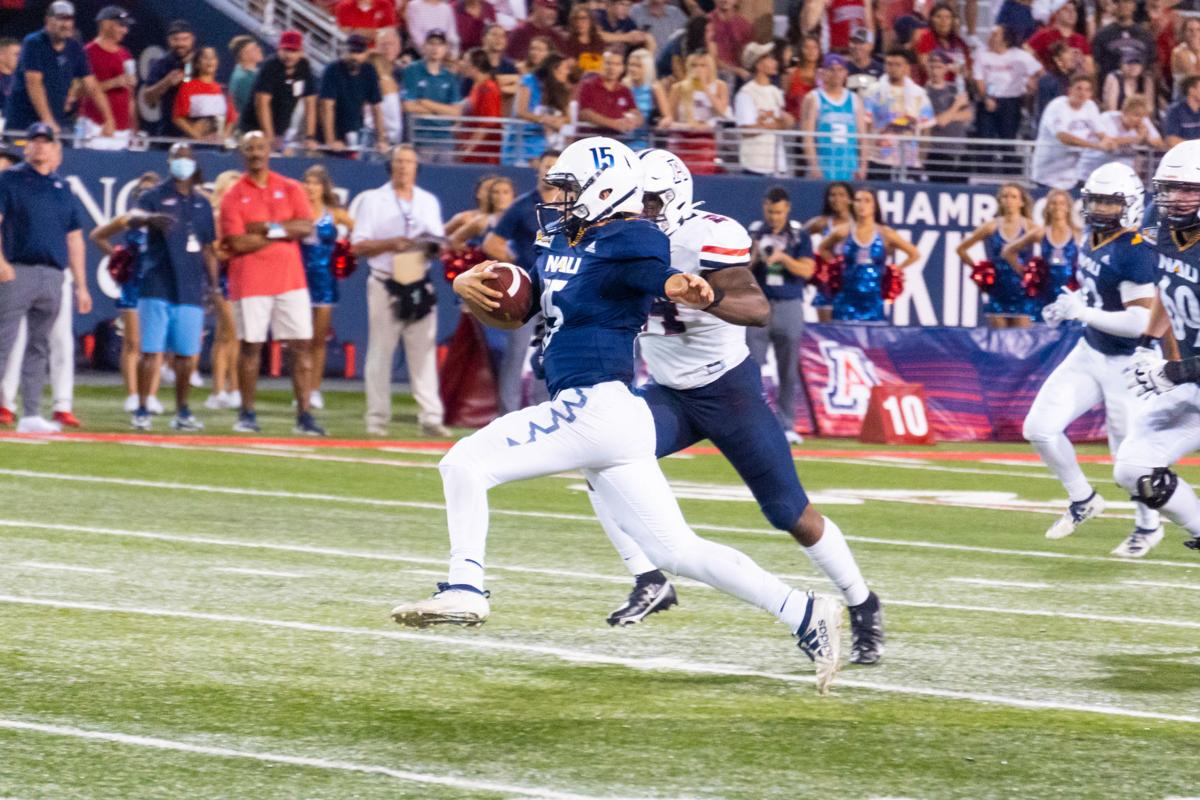 Northern Arizona Lumberjacks football knocked off the Arizona Wildcats, 21-19, in Tucson Saturday night to record their first win of the 2021 fall season and first victory over the Wildcats since 1932.

The Lumberjacks were down 13 at one point, but scored 21 unanswered points to take a lead and hold on with a stop on a late two-point conversion.

Northern Arizona was happy to put a mark in the win column, but a victory over a fellow Arizona team in the FBS made Saturday even more special for the Lumberjacks.

The game did not start in the Lumberjacks’ favor, though. Northern Arizona’s offense was slow out of the gate. It punted on its first three drives of the game before having three consecutive possessions end in turnovers, while Arizona scored 10 points in the opening period.

Down 10-0, quarterback Jeff Widener threw an interception, which Arizona returned to the Lumberjacks’ side of the field. Arizona capitalized with a short field goal to take a 13-0 lead early in the second quarter. Northern Arizona fumbled the ball away again on the next drive.

“Just as we felt we were moving the ball we turned it over. It’s the No. 1 fundamental we concentrated on is taking care of the ball, and we weren’t doing that,” Ball said.

But while Northern Arizona’s offense stalled in the first half, the Lumberjacks’ defense was relatively stout. They held the Wildcats to just 13 points despite Arizona’s short fields after turnovers and special teams plays.

The defense held the Wildcats to just 22 rushing yards through two quarters. Beside one 49-yard pass play for a touchdown, Northern Arizona limited the Wildcats’ explosive plays enough to keep itself in the game, and Ball said he was proud of the team’s ability to make plays in its red zone. Linebacker Harrison Beemiller led the way defensively, totaling 3.5 tackles for loss and a forced fumble in the first half.

“Going into this game we just said we had to play our defense. We kind of struggled doing that, trying to do our own thing on defense. And we decided that we’d stay in our scheme, and coach Partridge called a great game. Our front seven played really good against the run, and we just said it every time we came off the field, ‘Our defense is good enough,’” Beemiller said.

The Lumberjacks forced two turnovers in the first half. With 8:17 left in the second quarter, Northern Arizona defensive back Morgan Vest recovered a fumble on the Wildcats’ 20-yard line. The play put the Lumberjacks in immediate scoring position.

However, the Lumberjacks did not move the ball, and quarterback freshman RJ Martinez -- who came into the game in the second quarter -- threw an interception in Arizona’s end zone.

Minutes later, after Northern Arizona forced a punt to limit the interception’s damage, it punted again itself. Arizona quarterback Will Plummer’s pass was picked off by defensive back Brady Shough, who returned it 28 yards for a touchdown.

The Lumberjacks held on defensively, and ended the half down just 13-7 with some momentum on their side.

“It really changed the momentum of the game,” Ball said of Shough’s interception, “and I thought it really set it off to show to our players that we can win the game.”

Northern Arizona kept that momentum going in the second half. The Lumberjacks forced a turnover on downs on their own 35. With solid field position, Martinez started to look more comfortable on the ensuing drive. He made a couple effective throws and showed some evasiveness to pick up first downs.

Running back Kevin Daniels finished the drive with a 12-yard touchdown run, finding space to the right and barreling into the end zone. A successful extra point gave the Lumberjacks a 14-13 lead. Northern Arizona followed that score up with another defensive stop to keep the one-point margin at the end of the third quarter.

“My linemen came out and did a great job, and we just came out with a lot of effort, honestly,” Daniels said.

Arizona’s next offensive drive ended with another turnover. Northern Arizona defensive back Devontae Ingram intercepted a pass on the sideline, giving the Lumberjacks the ball on their own 40-yard line.

Northern Arizona marched down the field again, finishing the drive with a 9-yard touchdown reception by receiver Hendrix Johnson to increase the lead to 21-13.

From there, the teams traded possessions and punts, until Arizona started driving with a few minutes left on the clock. Sophomore quarterback Jordan McCloud replaced Plummer, and drove the Wildcats down the field. With 2:16 left in the game, he hit receiver Boobie Curry on a three-yard touchdown pass to trim Northern Arizona’s lead to 21-19.

Finally, McCloud lined up in the shotgun formation and threw a ball into the end zone. But, it was knocked out of the receiver’s hands for an incomplete pass.

Northern Arizona ran the ball for a first down, blowing Arizona’s final timeout and chance to stop the clock. The Lumberjacks knelt the last seconds of the game away and celebrated a major victory in Tucson.

“I’m ecstatic right now. It’s just a great team win. And hopefully we’ll look at the film -- obviously there were some mistakes -- and we’ll celebrate it tonight and we’ll get back to the grind tomorrow and fuel it going forward because we go into a tough conference schedule. And that’s what’s important right now,” Beemiller said.

Northern Arizona (1-2) will travel to Greeley, Colorado, to face Northern Colorado in the Lumberjacks’ third road game in as many weeks next Saturday.

Northern Arizona defensive back Brady Shough (43) runs back an interception for a touchdown in the Lumberjacks' game against Arizona Saturday in Tucson.