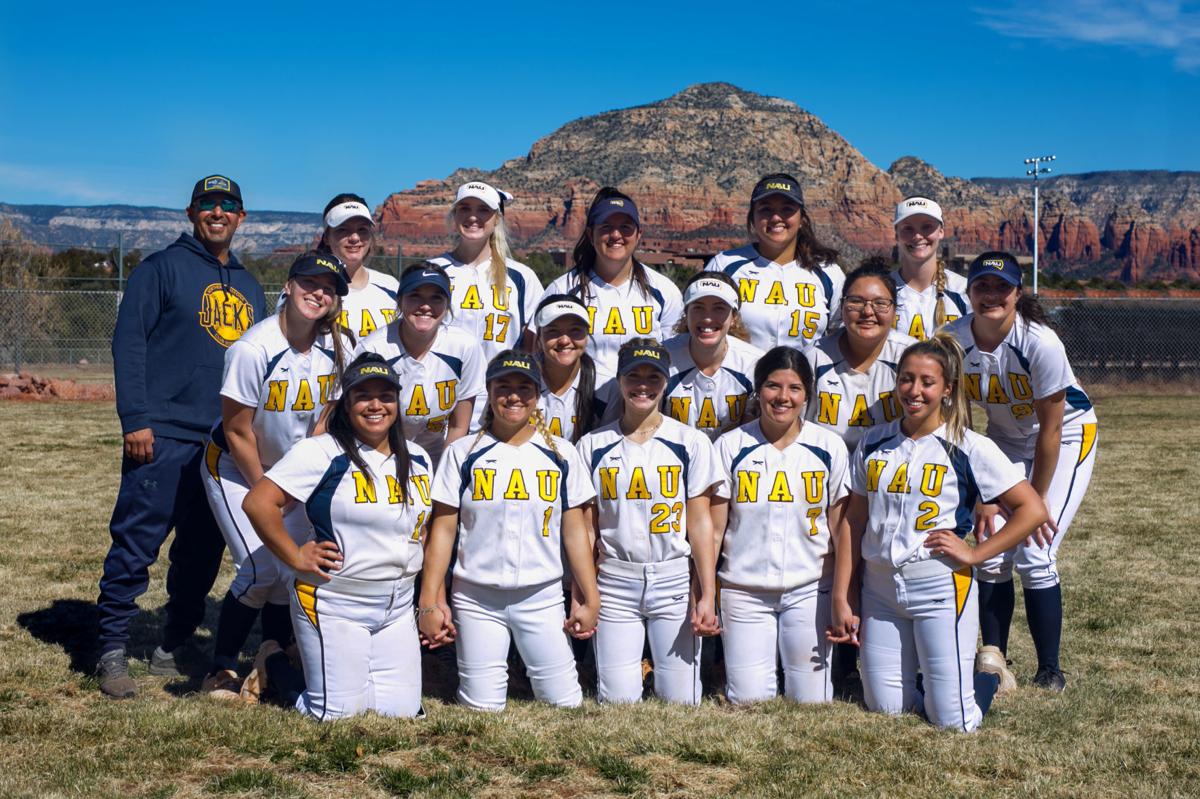 The Northern Arizona Jacks club softball team poses for a team photo for the 2020 season, which ended as the programs best ever despite being shortened by the coronavirus pandemic.

Despite having their year shortened as a result of the coronavirus pandemic, the Jacks posted their best regular-season record ever at 10-5, saw more dedication to the game from their roster overall compared to the past and were beating teams they could not overcome in series just a year ago.

They had just one more series remaining against Grand Canyon University, which owned the best winning percentage in the Pacific South Conference on an 8-1 mark before the season abruptly ended. The Jacks were well in contention for a trip to nationals.

“Missing out on the opportunity to face GCU and potentially make the postseason, it was just a bummer because we were in a really good place mentally," Jacks manager Tommy Hernandez said.

At the time of the cancellation of the season, the Jacks were in third place in the Pacific South, needing to move into second for a postseason spot. While GCU led the conference in winning percentage, UCLA sat in second with a 9-3 league mark.

Northern Arizona was set for its season-finale series against GCU. It was a chance for the Jacks to avenge a team that swept them a year ago in dominant fashion while Hernandez was just taking over as skipper.

“It was definitely a bummer,' Hernandez said.

At least they had a chance to improve.

“We were pretty fortunate to get most of our games in," Hernandez added.

Overall, when counting scrimmages and tournament ballgames played in the fall, the Jacks finished at 13-9 overall. Compared to seasons prior, the girls on the roster were more dedicated to practice and playing in nonconference games more than ever.

The Jacks were hitting .393 as a team. The defense was tight behind solid pitching. Players hailing from Flagstaff-based high schools were acting as leaders.

“This season the girls were way more dedicated," said Hernandez, who took over the helm midway through last season when the team was sitting at 0-6 and led them to an 8-10 finish for 2019. "We played all during the fall, during the scrimmage games against Mesa Community College and South Mountain, going to different tournaments, and so we got a lot more games in this year overall.”

Jacks senior outfielder Alyssa Polentz was a "tear" on offense for the team, Hernandez said. She batted .479 overall, and led the team total hits and runs scored at 34 and 26, respectively. Polentz ended her season with the second-most walks at 10 and in a tie with the second-most doubles with Kelsey Melton at seven.

“She was huge for us," Hernandez said of Polentz, who usually played in the two or three spot of the batting order.

The offense was powered by a pair of slappers who were once rivals at the varsity level. Former Flagstaff Eagles player Monica Encinas recorded a team-high 23 RBIs for the Jacks, who tallied six total player of the week nominations in their conference during the season. Meanwhile, former Coconino Panthers ballplayer Taylor Garcia finished tied with Encinas in total home runs at three and led the team along with Alyiah Poplawski in doubles with nine.

Encinas was one of a few Jacks players to earn player of the week honors in 2020, and she showed why she was always in the argument for the accolade with her play on both sides of the plate. She batted .407 and slugged .763 for the season while alternating defensively between shortstop and catcher, ending the season with a stellar .970 fielding percentage on two total errors.

Encinas and the Jacks also received much-needed pitching depth late in the season thanks to a late addition to the circle. After senior Ottum Jones and freshman Ashley Sahawneh guided the team through much of the season, sharing about the same amount of time pitching, the younger of the two suffered an injury, leaving room for senior Taylor Tenorio to provide her arm after joining the team as a late add.

“She saved us. She came in and threw well for us," Hernandez said of Tenorio, who emailed the skipper deep in the season to ask if it wasn't too late to try out for a spot.

Apparently the timing was perfect. Only after a few practices with the ballclub, Tenorio helped the Jacks get through the last few series, throwing 15 total innings and ending the partial season with a 5.13 ERA.

She hadn't pitched in a regular-season game since her high school days, and Hernandez fully initiated her to the team when he put her into a bases-loaded, no-out jam during a game for her first appearance as a Jack.

She got out of the situation without allowing a run to cross the plate, making a standout debut.

Tenorio was one of a handful of seniors for the Jacks who helped the club program reach new heights in 2020 despite the COVID-19 cutoff. The team also recognized seniors Polentz, Tenorio, Jones, Alina Jaramillo and club president Mikayla Kea for their efforts.

While the team made strides this season, they were put out by COVID-19 before being able to have their first-ever formal Senior Day, an event Hernandez mourned especially for Kea -- who according to her skipper had helped build the program from mostly scraps over the years.

"For her to miss this opportunity was pretty big. If it weren’t for her, we would not be where we are at," Hernandez said.

But Hernandez said players such as Kea helped build a foundation the Jacks can now build off of for years to come.

"I mean the girls were really riding high, and we had energy, it was a confidence-booster."

The Northern Arizona Jacks club softball team poses for a team photo for the 2020 season, which ended as the programs best ever despite being shortened by the coronavirus pandemic.