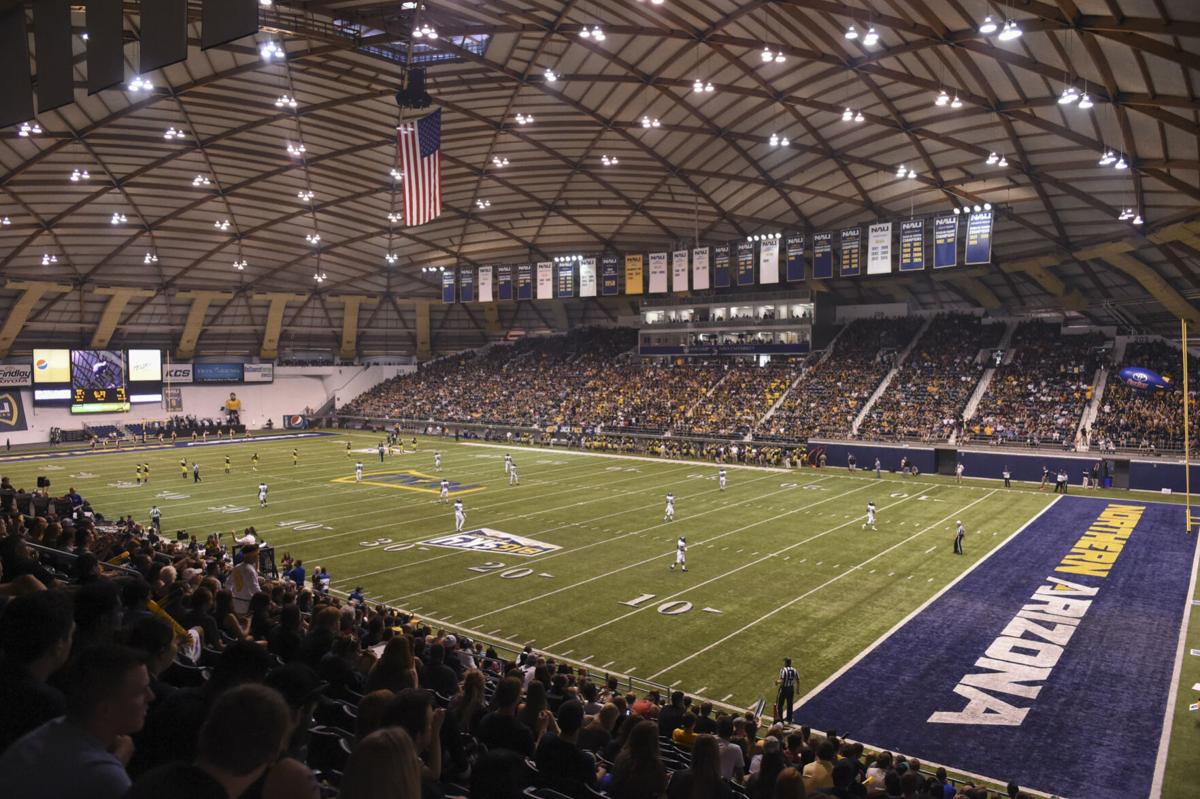 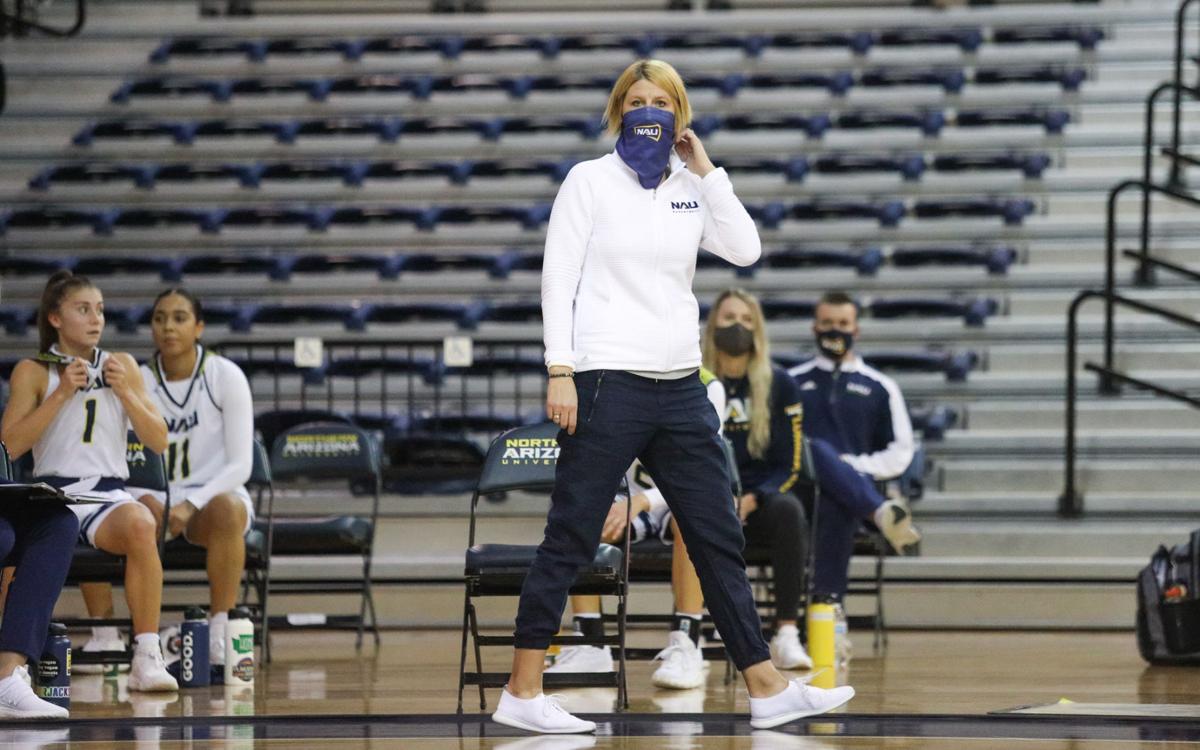 The pandemic completely flipped the college sports world on its head in 2020.

March missed its madness, fall sports became winter and spring sports, and title aspirations were cut short before the starting gun was fired. Here's a look at some of the top moments and stories around Northern Arizona Athletics and college sports in 2020:

Although the Northern Arizona men’s and women’s basketball teams were knocked out of the Big Sky Conference tournament by the time the COVID-19 pandemic shut off the lights for college basketball, things have still been different for the teams and all other college sports.

On March 12, the NCAA officially canceled March Madness, ending the college basketball season after most of the conferences had called off their own tournaments. The same day, Big Sky Conference track and field programs saw the entire spring season gone, along with the rest of the spring sports.

The circus of moving sports didn’t stop, as many FBS teams went ahead and played in the fall while Northern Arizona followed the FCS and Big Sky in waiting to play football in the spring. Aside from cross country, all fall sports were delayed until the spring with modified schedules.

Now, college basketball goes on. Masks are worn by all who attend, most of whom aren't fans and are considered essential staff such as the team, coaches, refs, athletics staff and media members who choose to be there. Even radio and TV broadcasts have taken on a weird look, with announcers talking through masks and face shields, often calling games live from their own homes.

The Lumberjacks were warming up in Albuquerque, New Mexico, hoping to achieve something the Northern Arizona indoor track and field program had never done: win a team indoor NCAA title.

The Lumberjacks got the call that the title meet was canceled during the warmups.

“We were on the verge of a big weekend for our program and our program’s history,” said Mike Smith, director of cross country and track and field at Northern Arizona, at the time. “ … No matter the case, it’s just disappointing. What I told our guys is, ‘It’s a privilege that just playing a game or not is a big deal in our lives right now. We are in a pretty good place in this world.’ They’re going to be just fine.”

Former Northern Arizona star runner Tyler Day was set to continue his dominant year, during which he set the American collegiate record in the 5K with a 13:16.95 mark in Boston, at the collegiate level's biggest stage. More on Day later.

When Jack Murphy left for an assistant coaching job at Arizona, the Northern Arizona men’s basketball team was left in a weird spot.

The team was coming off some of the worst seasons in program history, but there was proven talent on the roster and things were looking up if it all came together.

But the Lumberjacks were missing a key part: a coach.

The top assistant at the time, Wes Pifer, had just left to take a head coaching job at Division II Western Oregon. So the program turned to Shane Burcar, who just finished his first season as an assistant on Murphy’s staff that year after a strong coaching career at Mesa High School.

The following season in 2019-20, as the interim head coach, Burcar led NAU to its best record since 2014-15. Not long after the Lumberjacks were bumped out of the Big Sky tourney's first round, he was officially named the long-term head coach when he was given a five-year contract.

After a stellar career at Coconino High School, JJ Nakai took the long way back to Flagstaff.

Nakai not-so-quietly became the all-time leading scorer at Pima Community College, was a NJCAA D-II All-American and lit up scoreboards just like she did at Coconino. She took her talents to Nevada initially, but she rarely saw the floor in Reno and decided to find greener pastures.

So she came back to the green pine trees of Flagstaff, committing to Northern Arizona in April. Since then, the transition has been seamless as Nakai leads the Lumberjacks in scoring with 18.5 points per game on 44% shooting from the field and a blistering 45% from beyond the 3-point line.

She was joined by former Nevada teammate Miki'ala Maio, who has also been a strong option, with injuries and other absences pilling up so far this season.

While the men were having a rebirth of sorts on the court, the women’s team saw the fruits of the turnaround head coach Loree Payne has worked on since she came to Flagstaff.

In 2019-20 the Lumberjacks put together their best season in over a decade.

The team went 16-15 overall and 12-8 in the Big Sky and had the season end at the hands of Big Sky favorite and top seed Montana State in the semifinals by just five points. Khiarica Rasheed broke out as a star and the momentum, so far, has carried into the new season. Rasheed was a contender for Big Sky player of the year in 2020, and was named the 2020-21 conference preseason MVP.

There is renewed excitement and the squad is in legit contention for a Big Sky title, along with a potential trip to the NCAA Tournament if the team keeps up its momentum.

Another year, another WAC title for swimming and diving.

The program dominated the 2020 WAC championships with a top score of 677.5, beating second-place California Baptist by almost 100 points to cap off a seventh straight conference title.

The Lumberjacks had six individuals earn gold en route to the dominant showing in the pool.

Easy to see how swimming and diving in the WAC has been all Lumberjacks for most of the past decade.

There is little to no doubt that Tyler Day is one of the best runners in the history of the Lumberjacks distance programs. He cemented that in 2020.

The six-time All-American broke the NCAA men’s 5K record with a time of 13:16.95 time at the BU Terrier Classic. Day kept it rolling the rest of the season, eventually being named the men’s indoor track athlete of the year -- becoming just the second Northern Arizona runner to earn the accolade.

No. 8: Day signs with NAZ Elite

Later on in the year, Day continued his running career not too far away from his old stomping grounds. The former Lumberjacks star joined former Northern Arizona teammate Matt Baxter and signed with NAZ Elite in August.

Day has been easing his way into the team’s ranks, competing and performing well at the ekiden in Michigan.

Northern Arizona Athletics faced similar negative repercussions of the pandemic as many colleges in the nation.

While the non-athletics side of Northern Arizona University was riddled with professor and faculty cuts, the athletics side had its own struggles. The department was included in the university-wide pay cuts and furloughs.

Day wasn't the only recent Northern Arizona grad to get a pro contract.

Former football player Khalil Dorsey signed with the Baltimore Ravens as an undrafted free agent and has appeared in six games, primarily on special teams. He has two tackles this season.

Brooks DeBisschop, a former men's basketball player and key part of the 2019-20 team, signed a pro hoops contract overseas and is currently playing in Belarus for BC Borisfen. DeBisschop is averaging 13.8 points and 10.7 boards per game early on in his pro hoops career.