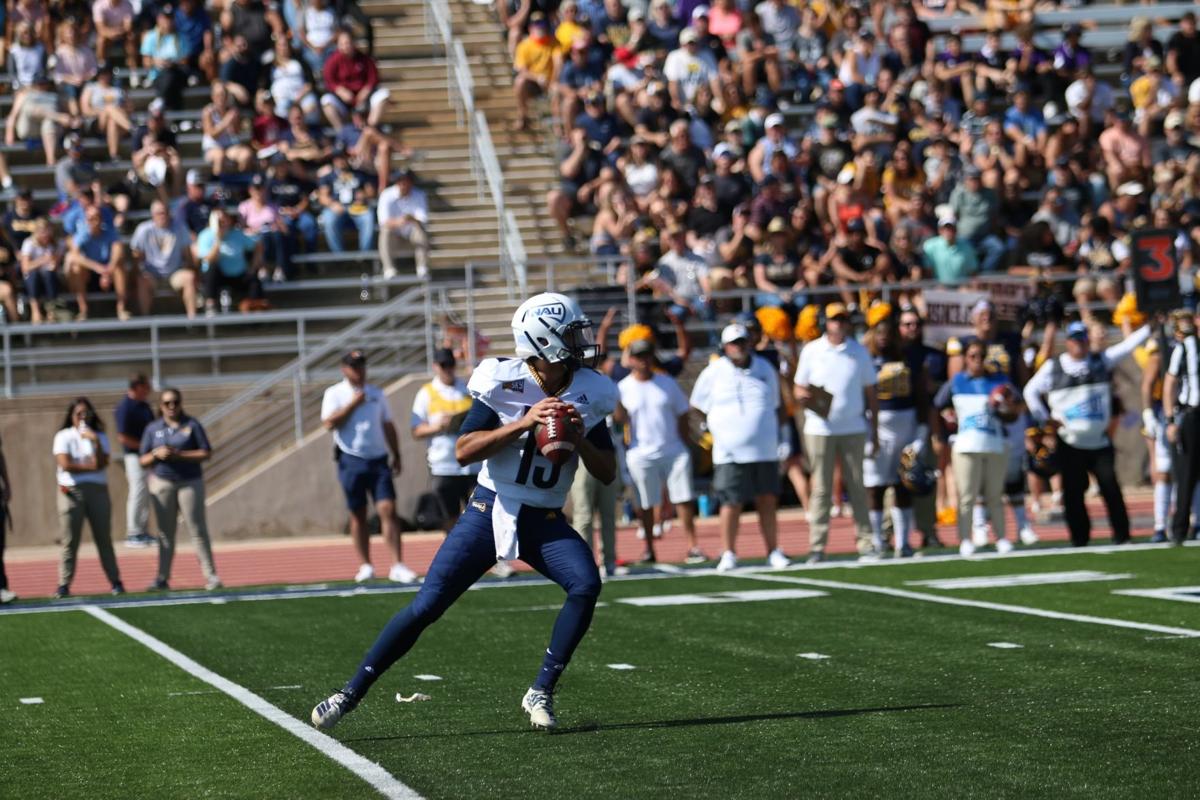 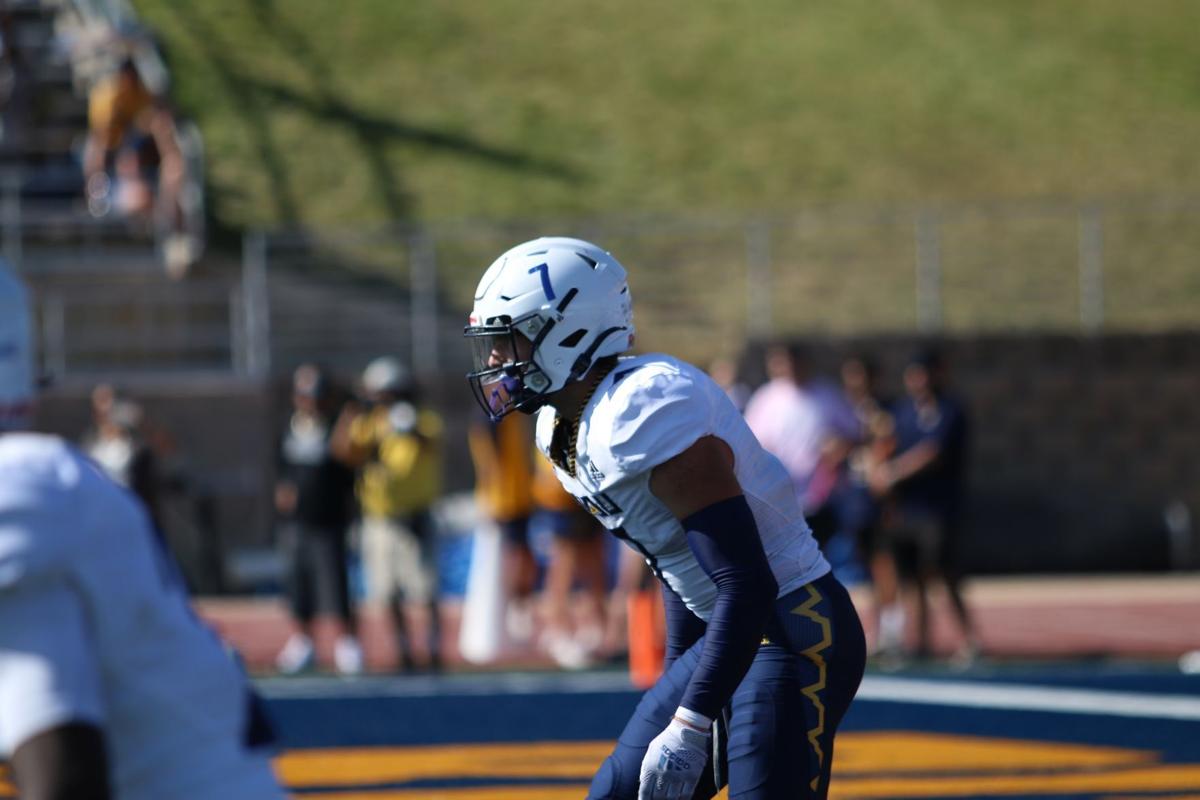 Redshirt junior Morgan Vest (7) was part of a Northern Arizona defense that allowed just 10 points in regulation at Northern Colorado on Saturday.

Tied 10-10 heading into the extra period, the Bears had the ball first and scored a quick touchdown. Northern Arizona was stuffed on fourth down on the ensuing drive while attempting to tie the game, and the Bears celebrated their victory.

“It was just a lack of execution, we didn’t play very well offensively at the end,” coach Chris Ball said.

Aside from the overtime score, the Lumberjacks defense was stout the majority of the game. The two squads traded punts throughout the first quarter, and neither eclipsed 50 yards.

Late in the period, freshman quarterback RJ Martinez -- making his first start -- fumbled to end what was Northern Arizona’s best offensive drive to that point. The Bears capitalized on good field position, and moved the ball just enough to give kicker Ben Raybon a field goal attempt from 51 yards out. He converted to give the Bears a 3-0 lead on the first play of the second quarter.

From there, neither team could move the ball at a significant rate, as the defenses were imposing still. Midway through the period, receiver Stacy Chukwumezie caught a ball and went down with an apparent injury after the tackle. He was taken off the field and did not make another catch in the game. Ball said he is unsure about Chukwumezie's status moving forward.

“He just caught the ball on the sideline and his knee got twisted up. We’ll see how he feels tomorrow,” Ball said.

The Lumberjacks moved the ball some, but finished the ensuing drive with a missed field goal on a long attempt. Northern Arizona played solid defense again, and forced a punt. It put its best offensive drive of the game together in response.

Martinez and the offense started from their own 7-yard line, methodically moving the ball down the field. Near midfield, Martinez hit receiver Coleman Owen for a long reception to Northern Colorado’s 25-yard line with 1:19 left in the half. Running back George Robinson rushed a few times from there, including a 17-yard touchdown run to give the Lumberjacks a 7-3 lead with just 35 seconds left until halftime.

The defense held up on the final plays of the period, and kept the lead going into halftime. Northern Arizona gave up just 100 yards of total offense in the first half.

“We missed some opportunities the first half. Defensively we played really well, but the offense made a few mistakes,” Ball said.

Northern Arizona started the third quarter with the ball, but went three and out on its first drive. It was the start of a tough quarter, in which the Lumberjacks accumulated just 10 yards.

The Bears ended the 16-play drive, taking over eight minutes of game time, with an 8-yard touchdown reception by receiver Dylan Mitchell. Northern Colorado led 10-7 with 5:28 left in the quarter. Northern Colorado had another chance to increase its lead on the next offensive drive, missing the kick, but still held the lead after the third period.

Northern Arizona’s offense found some life again early in the fourth quarter. On fourth down, needing just one yard from his own 40-yard line, Martinez dove forward for a first down. Minutes later, he rolled out of the pocket on a broken play and found receiver Hendrix Johnson for a 56-yard pass to Northern Colorado’s 3-yard line.

The Lumberjacks could not punch the ball in for a touchdown from short range, though, and settled for a chip-shot field goal to tie the score at 10-10 with 11:22 left.

Then, after playing more effective defense, Northern Arizona got the ball back at its own 40-yard line with just 6:32 remaining in the game. They moved the ball to Northern Colorado’s 16-yard line and attempted another field goal to take a late lead.

The kick missed, though, and neither team scored in the final two minutes to win in regulation.

Northern Arizona won the toss, and elected to play defense first in overtime. Northern Colorado scored on a 15-yard pass to receiver Jaren Mitchell and kicked an extra point to go up 17-10. The Lumberjacks had the ball on Northern Colorado’s 25-yard line with a chance to tie.

After three short runs, Northern Arizona needed just one yard on fourth down to keep the drive and game alive. The Bears defensive line got a tremendous push on Northern Arizona’s run, tackling Robinson behind the line of scrimmage and ending the game.

The Lumberjacks (1-3, 0-1 Big Sky) finished their three-game road trip with the loss and will host Idaho State next Saturday at the Walkup Skydome.

“We’ve got to get back to it," Ball said. "We still can accomplish every goal we’ve got."

Redshirt junior Morgan Vest (7) was part of a Northern Arizona defense that allowed just 10 points in regulation at Northern Colorado on Saturday.