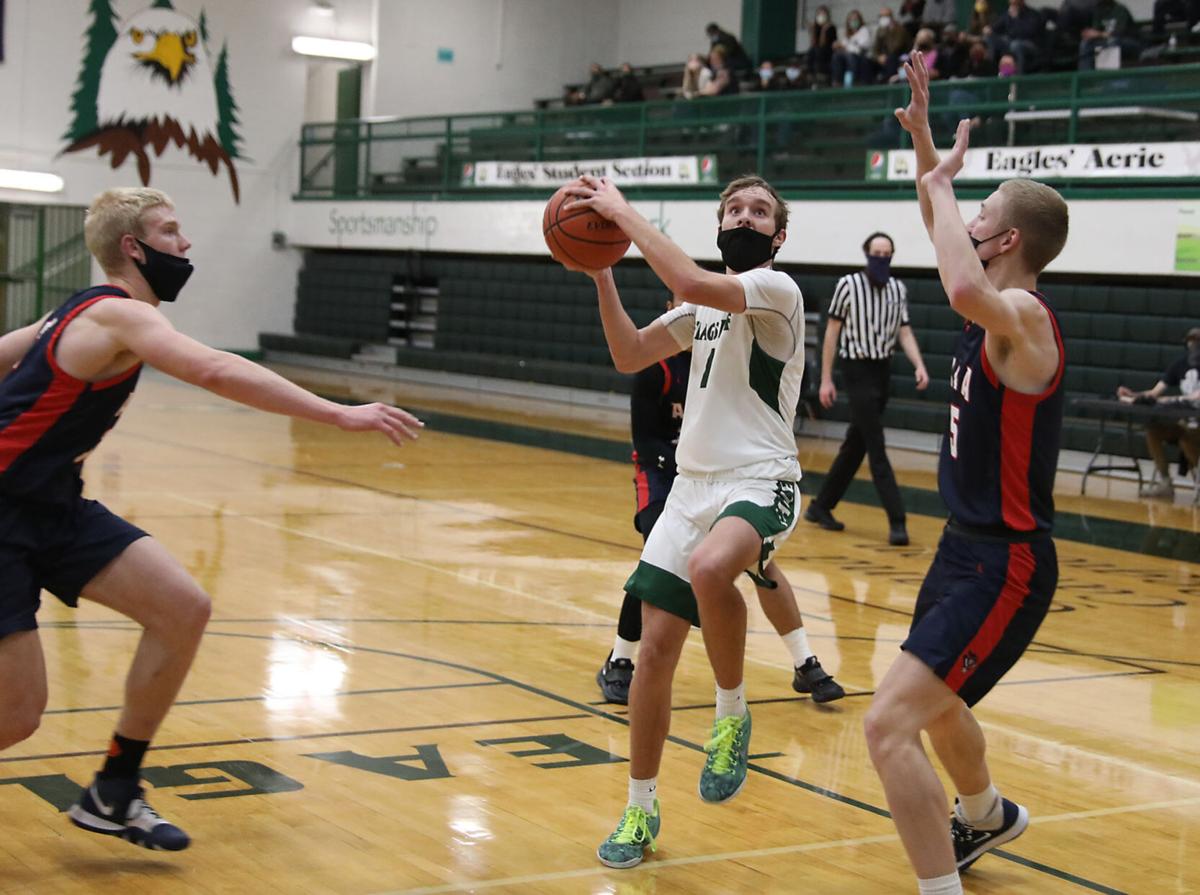 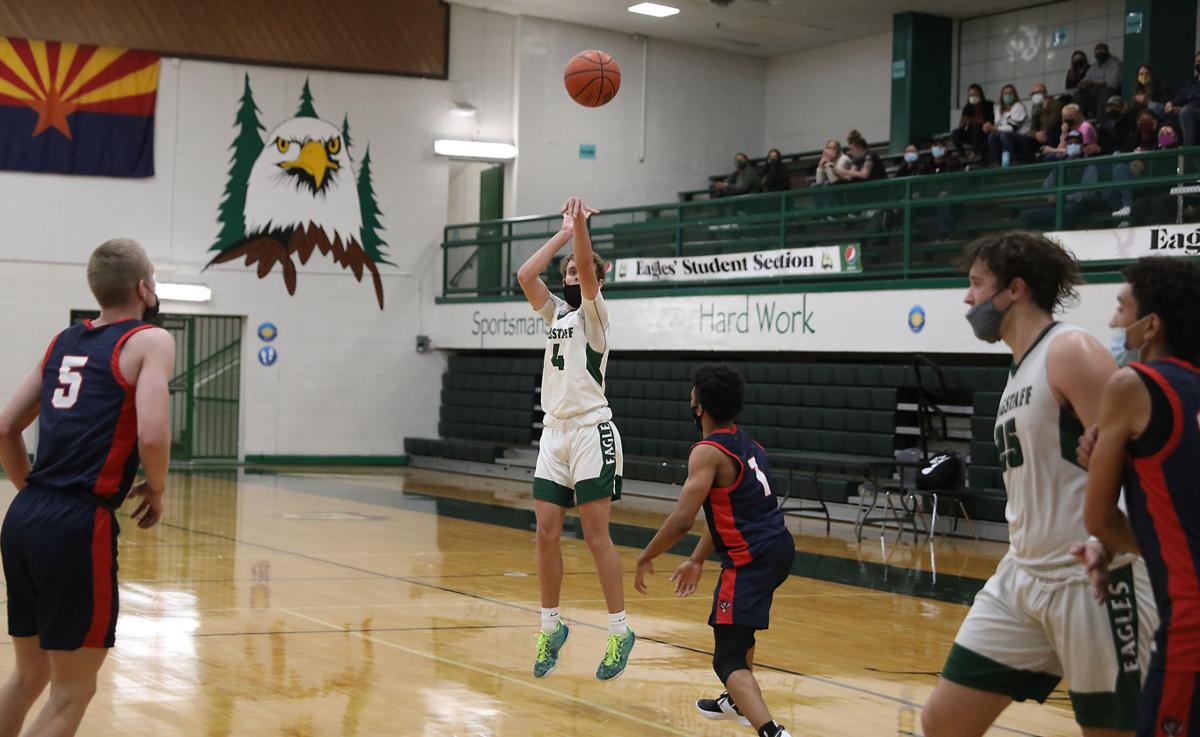 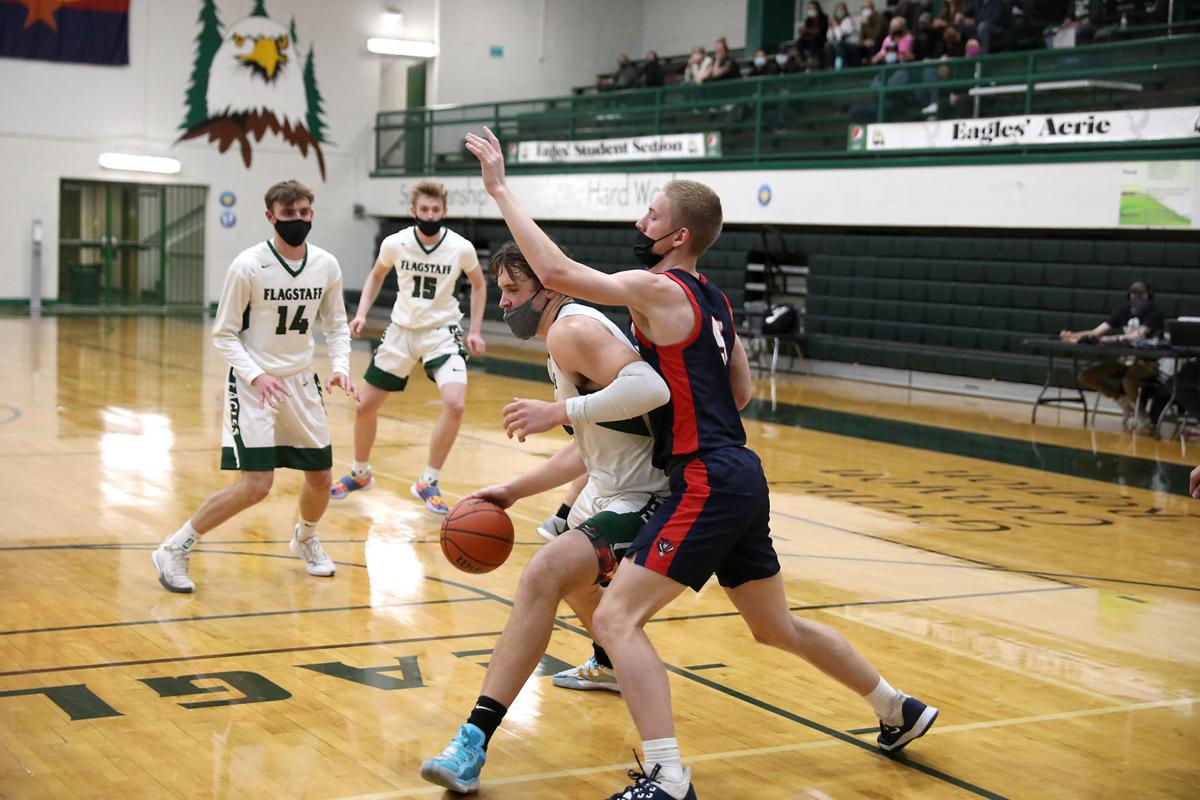 Flagstaff’s Nick Morrow (25) works his way to the basket during a game against American Leadership Academy Friday night at Flagstaff High School. 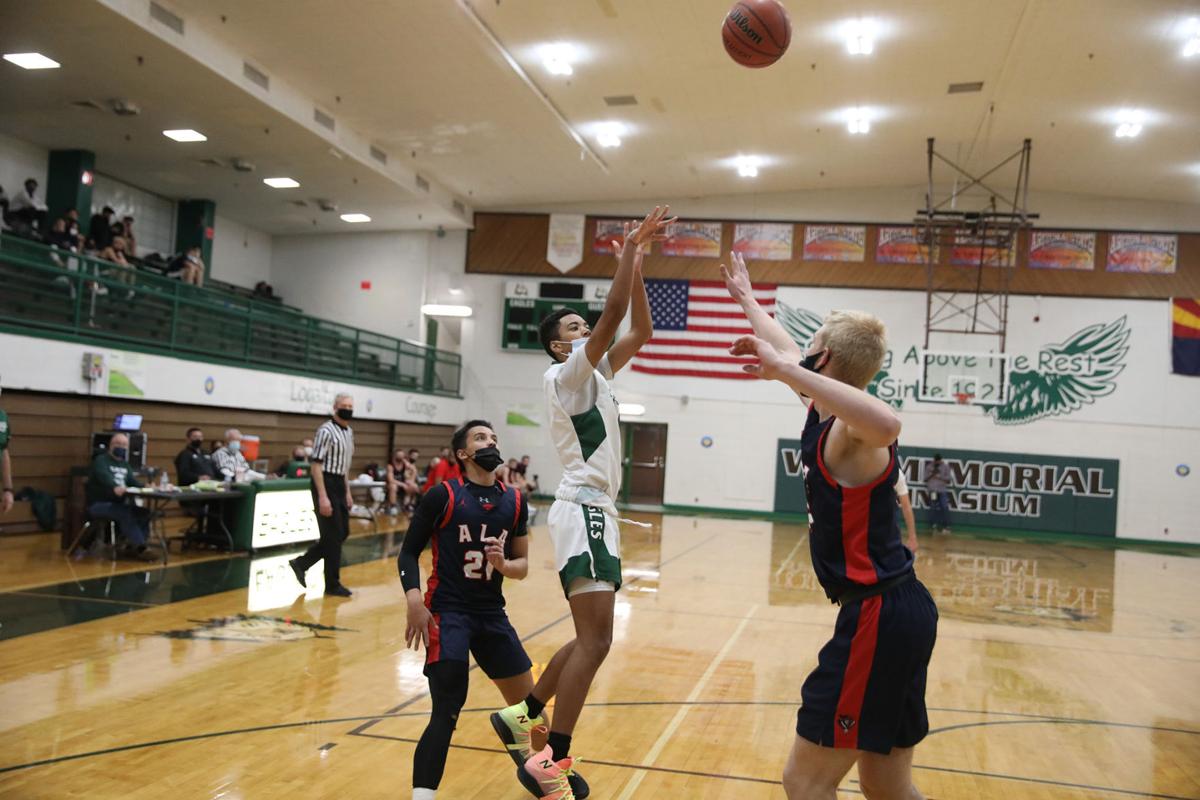 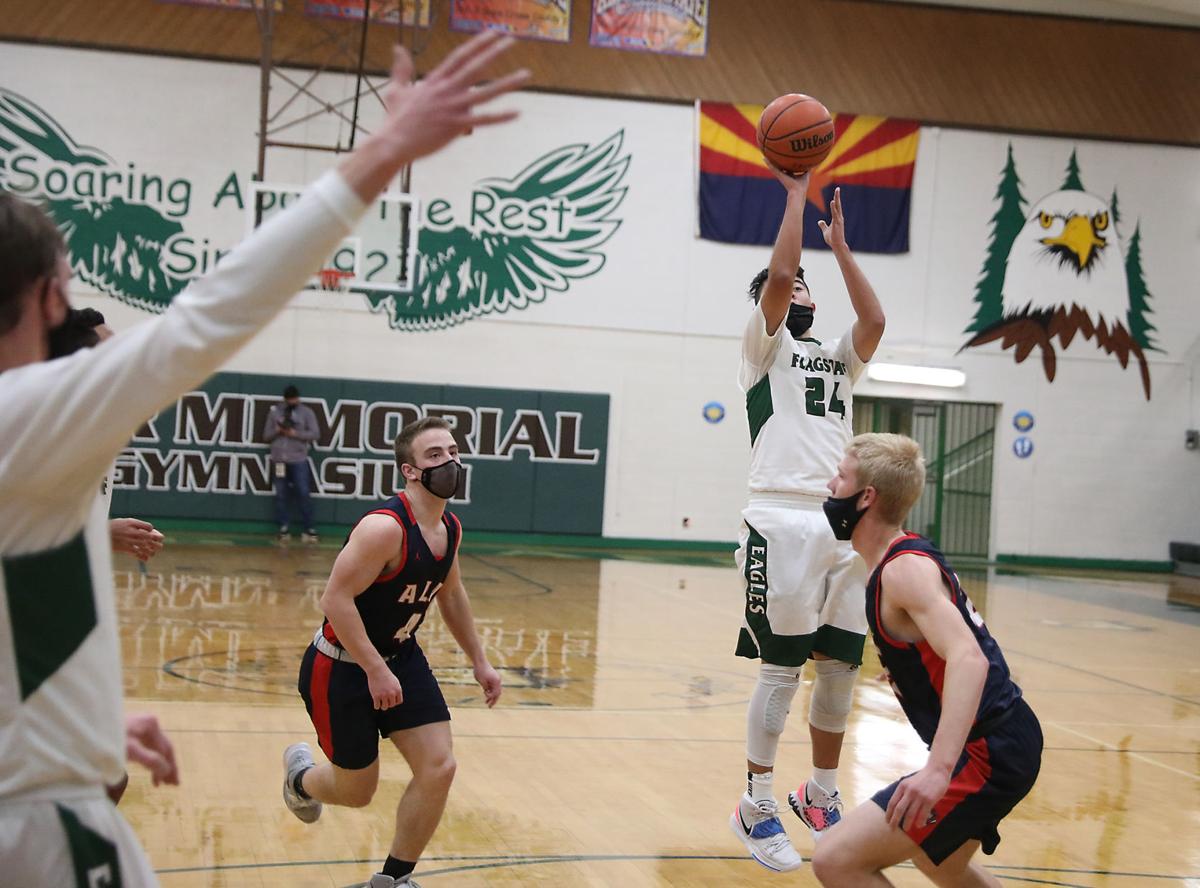 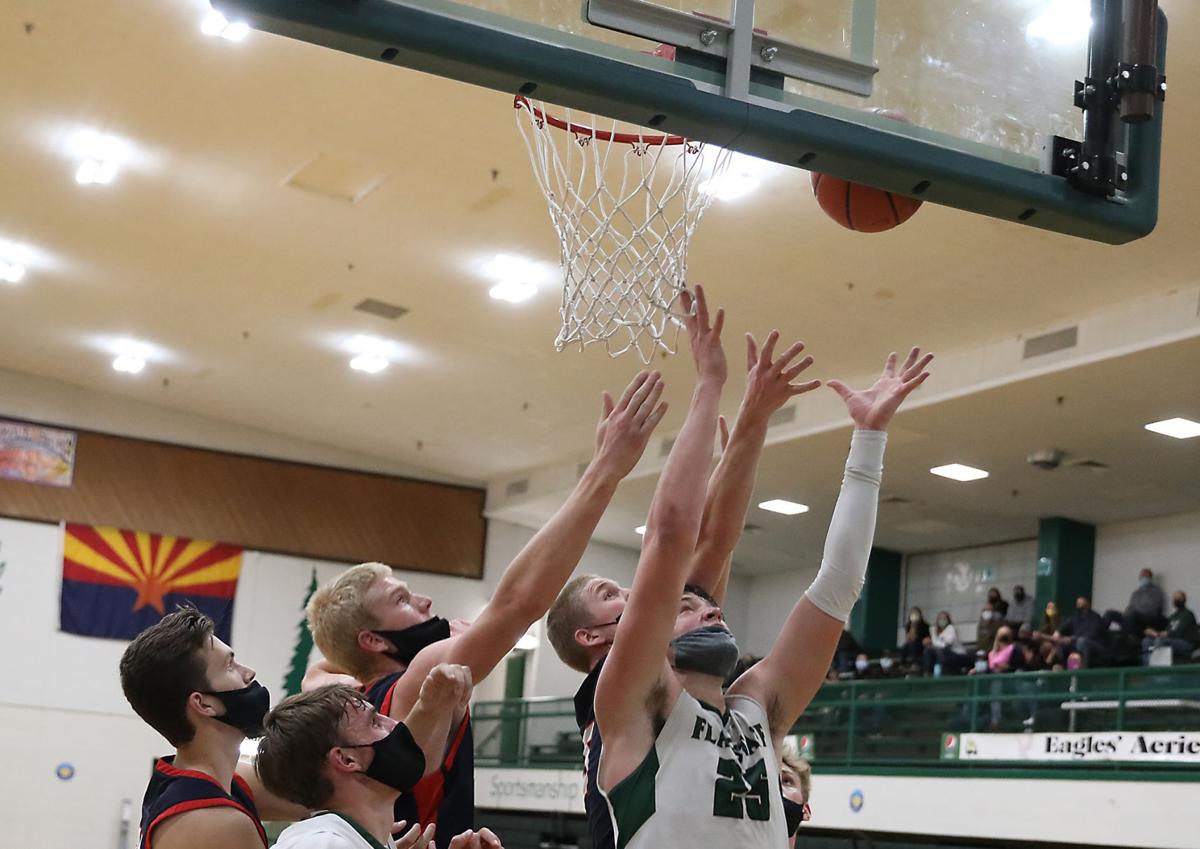 Mohave isn't very good, still winless at 0-13, but the Eagles finally got their shooters hot, and head coach Nick Walton hoped they would stay hot after the big win. Well, two days later, the shooters are still hot.

Behind 20 points from Josh Lenners, the Eagles took their second win in a row after dropping a pair to beat American Leadership Academy-Queen Creek, 62-52, at home Friday night.

Flagstaff improves to 5-6 overall and keeps its playoff hopes afloat. While the team still needs more good fortune to sneak into the 16-team field, a win over ALA-QC -- ranked No. 17 entering the day -- is big for the No. 27 Eagles with seven games remaining.

Three of the Eagles' seven games left are against teams ranked in the top 14 of the 4A Conference as of Friday's list: Deer Valley (7), Bradshaw Mountain (13) and Prescott (14).

So, a win over a solid ALA-QC Patriots team is a great start for Walton and company.

"This was a great win for us," Walton said. "I'm really proud of everybody. ... We had the Mohave game circled. We thought we could get some momentum after that game, and the whole mindset in practice yesterday was great and it showed tonight."

Flagstaff got some solid fortune as the Patriots' most prolific scorer, McCoy Kelly, didn't start and looked like he was battling a leg injury for most of the game, keeping the marksman from getting clean looks as he finished with just nine points off three 3-pointers.

Flagstaff opened with a quick 15-4 advantage in the first quarter behind balanced scoring. ALA-QC cut the lead down to 15-7 entering the second and got it within three at 15-14 off a 7-0 run to open the quarter.

Flagstaff answered the run with a jumper by Nick Miller, but things were pretty chaotic. So, Walton called a timeout, got his team collected, and the Eagles had an answer.

Out of the timeout Nick Sneezy drilled a 3, then Max Fritsch found space for a hoop and Miller hit a layup to give Flagstaff a 24-14 lead off a 9-0 run with under two minutes left in the opening half.

The lead extended to 17 entering the fourth after a strong third. But then ALA-QC had an answer.

A few empty possessions passed and Flagstaff found some good fortune with a made trey from Lenners to make it a nine-point advantage. Kelly answered with another trey, but Flagstaff rattled off a 5-0 run that was capped off by a corner dagger 3 by Lenners to put the Eagles up 58-47 with just 1:35 left.

Lenners' trey proved to be the decider as the Eagles kept the Patriots from the big comeback. Following the Lenners 3, Kelly left the game limping off the court and he didn't return as his team couldn't complete the comeback.

No. 3 Coconino escaped a tight one. The Panthers kept their perfect record intact after getting by No. 32 Thunderbird on the road by just five in the meeting of 4A teams.

Preston Olney scored a team-high 19 for Coconino, which got to 10-0 with the win and has its best start in recent memory. Jacob Begay scored 12 but struggled to hit from the field going 3 of 14, but went 4 of 4 from the charity stripe.

The Panthers get a break before heading down to No. 13 Prescott for a Monday match-up in Prescott at 7 p.m.

The 2A Northland Prep Spartans dropped their third loss in a row, losing to 1A Williams on the road. Northland Prep (2-7) hosts NFL YET Saturday at 1 p.m.

Marcus Dufek set a new school record, scoring 34 points as 1A Basis routed Bagdad at home, improving to 6-2 with the win and sitting well in the 1A at No. 11 as of Friday. The Yeti host winless St. Michael on Tuesday at 6 p.m.

Make it eight wins in a row for No. 4 Flagstaff, as one of the hottest teams in the 4A keeps rolling, beating ALA-QC on the road.

Gracelyn Nez dominated again with a team-high 23 points and Sage Begay contributed 16 as well in the Eagles' fifth straight double-digit victory. The Eagles (10-1, 7-0 4A Grand Canyon) are at Lee Williams on Monday.

The 2A Northland Prep Spartans dropped their fourth loss in a row, all since winning their second game of the season. The Spartans host NFL YET Saturday at 11:30 a.m.

After rolling to five wins in a row, No. 3 Flagstaffsaw its streak halted by No. 12 Cortez in a close match at Flagstaff High School. The Eagles (7-2, 4-1 4A Grand Canyon) head down to Prescott Valley to take on Bradshaw Mountain.

The Coconino boys soccer team fell again, losing to 4A Barry Goldwater on the road. The Panthers (1-6, 0-4 4A Grand Canyon) travel to Bullhead City for a match against Mohave on Wednesday.

The Eagles had a late add to their schedule following two cancellations -- unrelated to the Flagstaff program. The Eagles scheduled the No. 10 team in the 5A Conference, Horizon, and competed in a 1-0 loss on the road.

Coconino took a resounding and dominant road win over Barry Goldwater to improve to 2-6 overall as the Panthers took their second win in a row following an 0-6 start to the season.

The 4A Panthers host Bradshaw Mountain on Tuesday at Cromer Stadium at 3 p.m.

Flagstaff’s Nick Morrow (25) works his way to the basket during a game against American Leadership Academy Friday night at Flagstaff High School.