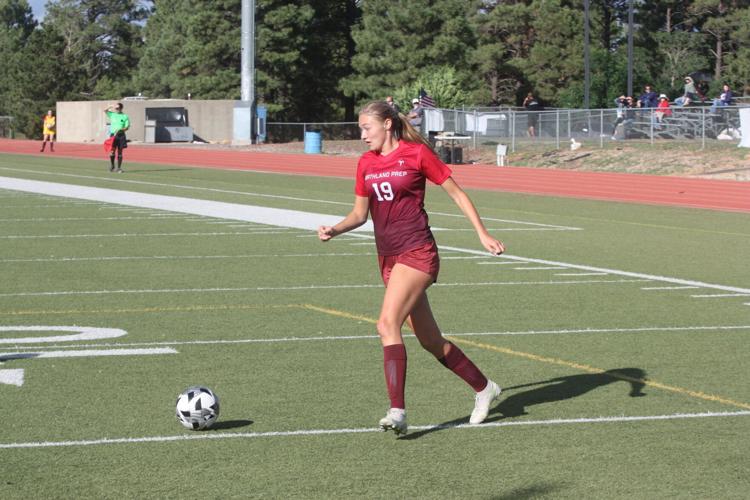 The Spartans avenged last year's loss in the state title match to the Cougars in addition to a 2-1 exhibition loss at the Chino Cup Soccer Tournament on Saturday, Sept. 10.

In the 67th minute, Northland Prep's Mollie Donahoe was fouled just outside the box. Campbell Blair took the free kick and scored the lone goal.

“I grabbed the ball out of the keeper’s hands and finished quickly. I’m so grateful to the defense, who really stepped up. I owe all of it to God, who has given me this opportunity to play for His glory," Blair said via email.

“Our defense played amazing. and the girls gave me a gift for my 25th wedding anniversary," Spartans co-coach Michael Blair added.

The Spartans (4-0, 1-0 Central Region) will visit Round Valley on Thursday.

The Ed Doherty nominations honor a group of top players from the past week's varsity football games, with a winner to be named at the end of the season in a luncheon in Scottsdale.

Brown threw for six touchdowns in his first varsity start, helping lift his team to a 59-12 victory over Rio Rico at the Walkup Skydome.

The 2A Spartans won their second straight match behind a team-high 17 kills from senior Bella Moseng, who also recorded a solo block and assisted on two other rejections. Spartans junior Miranda Greene added 11 kills. Moseng reached her double-double with a team-high 19 digs.

The Spartans struggled with hitting, however, along the way, finishing with 43 total kills and 33 hitting errors on 137 attempts. Spartans setter Caroline Jameson tallied a season-high 33 assists.

Freshman Malia Turner came away with nine service aces for the Spartans, who totaled 17 total aces.

The Spartans (3-5, 1-0 Central) were set to play in their third match in as many days with a Wednesday home contest against the Glendale Prep Griffins.

I was in shape for this year’s Whiskey Basin Half Marathon, and my goal was to push myself across the entire distance. I went out hard, determ…

NAU Roundup: Vikings' strong first half too much for Lumberjacks to overcome in Portland

Trying to battle back from a 22-point deficit, the Northern Arizona Lumberjacks held the Portland State Vikings to just seven points in the se…

Eagles football looks to bounce back against Washington

It’s homecoming weekend for the Flagstaff football team, and the Eagles are getting set to finish the first half of the season strong with Fri…

Hannah Petrucci was asked if she gets tired of hat tricks and other goal-scoring streaks Thursday afternoon.

Northern Arizona defensive lineman Sheldon Newton has proven, at this early part of the season, a bright spot in one of the Lumberjacks footba…

What is pickleball and why is it so popular?

What is pickleball and why is it so popular?

After years of prohibition, boxing gains popularity among women in Libya

After years of prohibition, boxing gains popularity among women in Libya