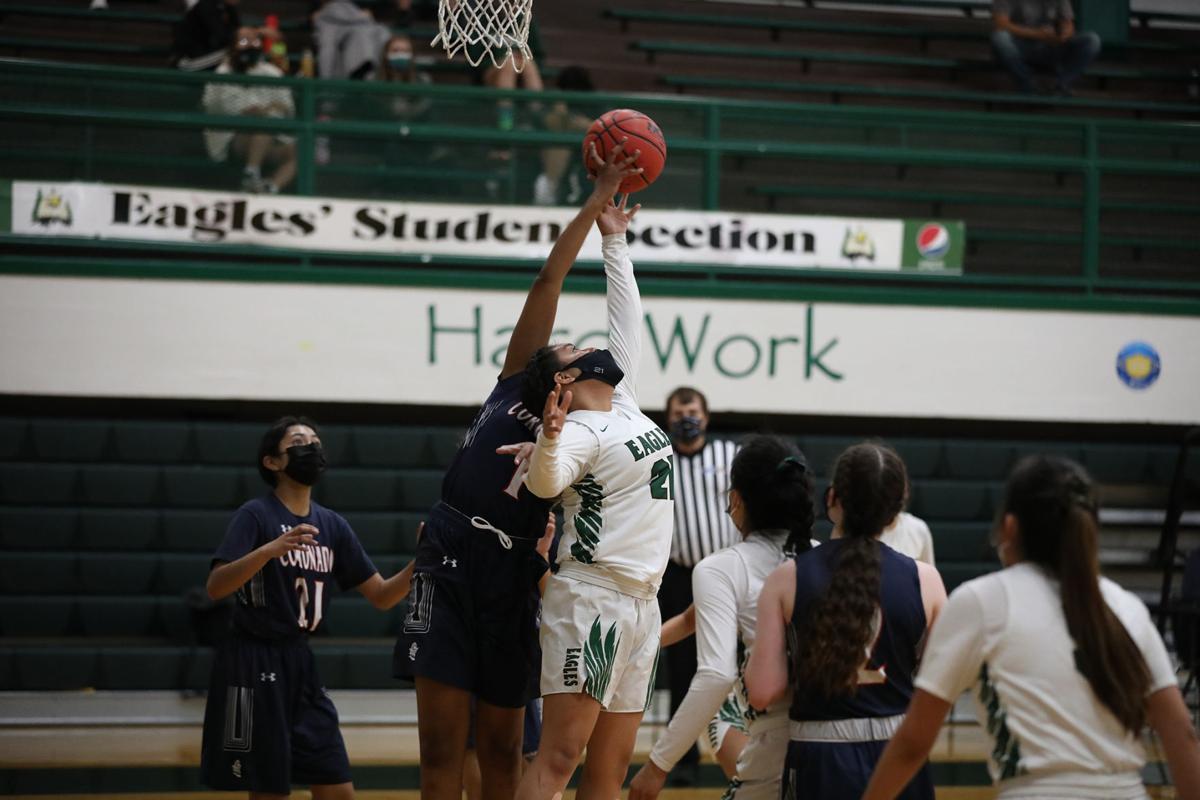 Flagstaff’s Jasmine Redhouse (21) contests for the ball under the basket during a game against Coronado Tuesday night at Flagstaff High School. 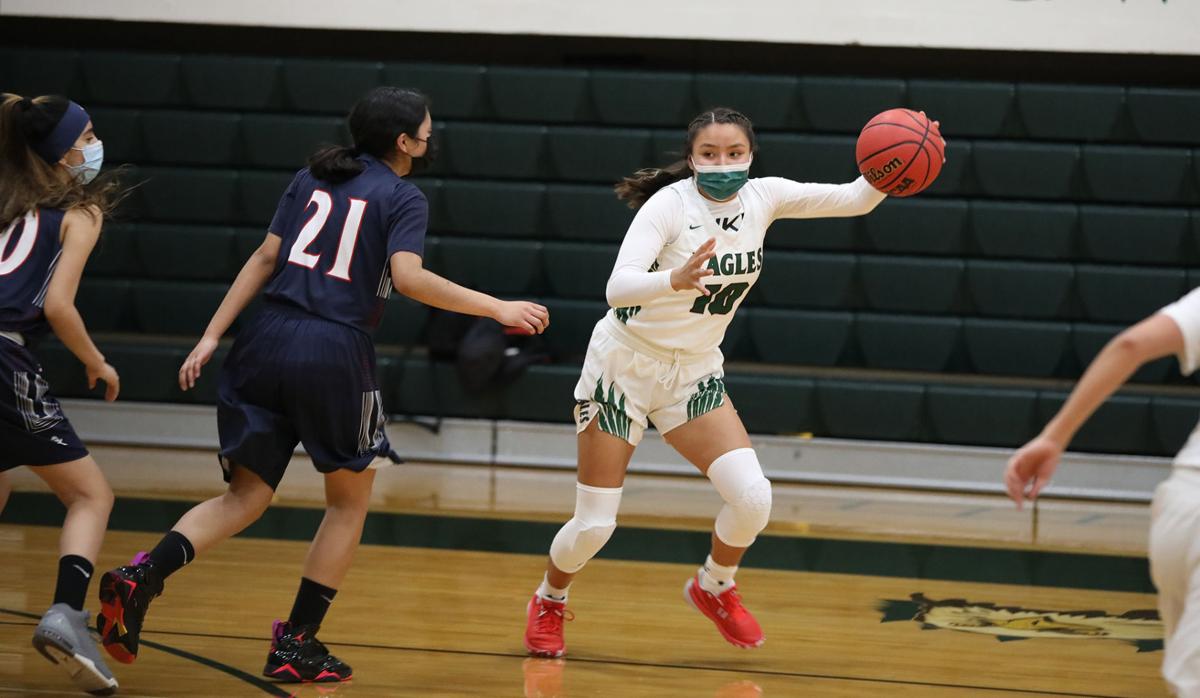 Flagstaff’s Sage Begay (10) looks for a path through the Coronado defense Tuesday night during her team's home game in the War Memorial Gymnasium. 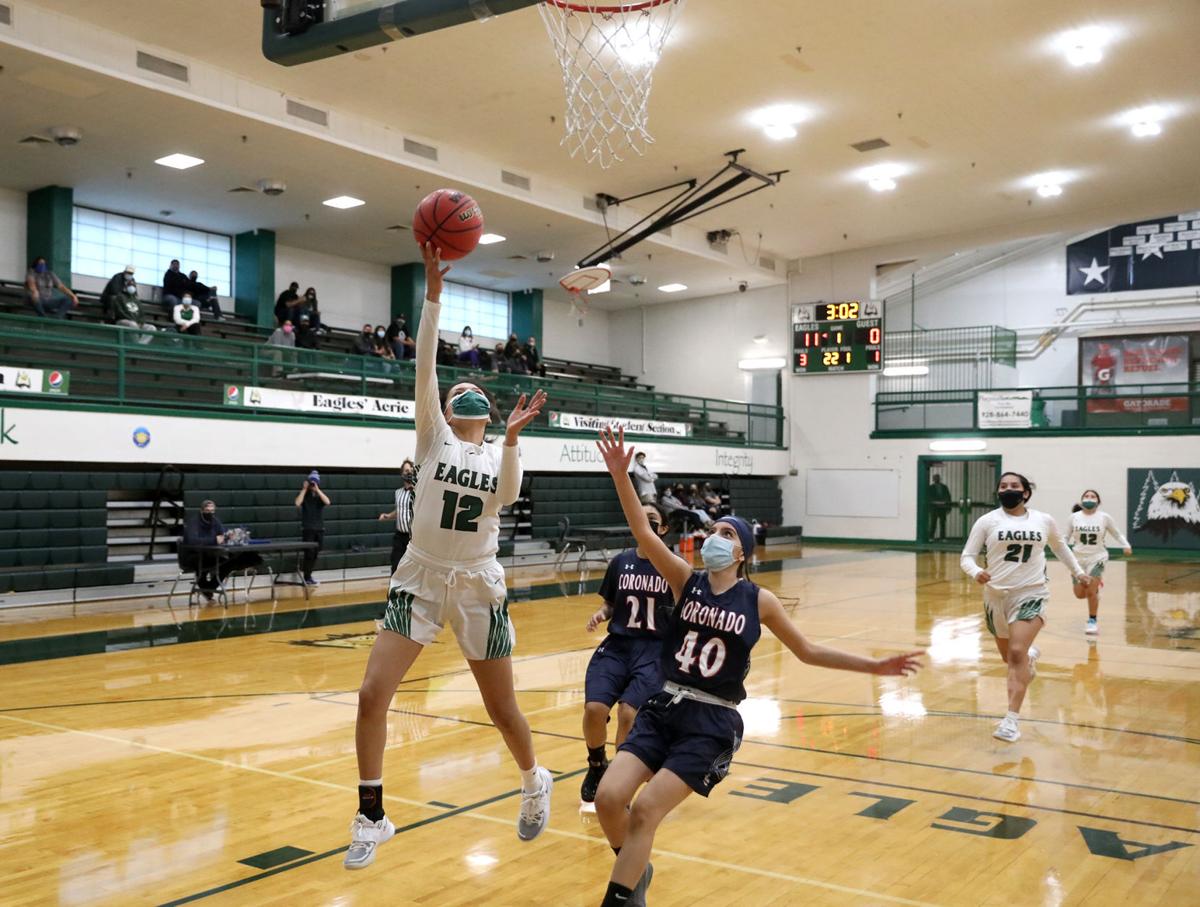 Flagstaff’s Mariah Myerson (12) takes the ball to the net over Coronado Tuesday during a game in Flagstaff High School's War Memorial Gymnasium.

After dominating Mohave, 80-28, in their last game, the 4A Conference No. 4 Flagstaff girls basketball team stayed hot Tuesday, as they were able to play on cruise control and take the easy win over the Coronado Dons 63-15 at home.

The game was a mismatch from the opening minutes of the contest as the Eagles -- 8-1 after the win -- quickly got out to an 18-0 lead and did not let up throughout the first half.

The win makes six in a row for a rolling Eagles squad.

Flagstaff forced its will against the Coronado’s lackluster offense and sloppy ball handling, tallying 29 steals. Flagstaff also controlled the rebounding on both sides of the floor, collecting 20 offensive rebounds and setting up multiple second-chance buckets.

With the score being so lopsided, Eagles head coach Tyrone Johnson saw an opportunity for his bench players to play some quality minutes for the team.

Senior guard Ashly Talayumptewa took full advantage of the chance. She came off the bench and was Flagstaff’s leading scorer on the night with 12 points, two rebounds and one assist. She also helped the team reach its impressive steal total, collecting seven by herself. Sophomore guard Mia Perez was also active in the scoring department, scoring 11 off the bench, and came up with a blocked shot at the top of the key.

Once the fourth quarter came around, the Eagles were up by 38, which forced the running clock rule for the rest of the game.

Even with a win like Tuesday, Johnson said there is still a lot of room for improvement for his squad.

“I don’t think we took a step forward in this game necessarily,” Johnson said. “In my opinion we did not capitalize a lot. We were sloppier then we have been the last couple games; wide-open opportunities were missed and some balls weren’t caught.”

With nine games left on the schedule, Johnson also said his team is just looking to get even better before the playoffs roll around.

“Every game is important because we want to get the power points and we want to give ourselves the best chance that we can to be ranked as high as we can," Johnson said. “We’re just gonna take it one game at a time.”

Flagstaff has a quick turnaround, as it will hit the road to play Grand Canyon Region squad Mohave Wednesday.

The No. 1 team in the 4A Conference was given a solid challenge by No. 8-ranked Coconino Monday night.

The Panthers fell to top-ranked Seton Catholic on the road, pushing the undefeated Sentinels with a disciplined night on defense. Coconino's Mahala Long led the scoring charge with eight for her team, while Wynter Huskie added in seven and Kiana Manuelito and Soma Freeman scored six each.

Northland Prep dropped their third in a row and fell to 2-9 overall with a loss Tuesday night against Valley Lutheran on the road. The 2A Spartans will travel to 1A Williams Friday.

The 4A No. 20 Flagstaff Eagles fell on the road to the Coronado Dons in a 4A Conference freedom game.

The Eagles dropped their second in a row, falling to 3-6 overall in the process. Nick Morrow led the Eagles with 18 points and Josh Lenners and Nick Sneezy scored 12 each. Flagstaff hosts Mohave Wednesday at 7 p.m.

After a solid start to the season, 1A No. 11 Basis ran into one of the tougher teams in the conference in a loss to No. 3 Mohave on the road in Bullhead City.

The 1A Spartans dropped their second straight with a 22-point road loss at Valley Lutheran. The Spartans, now 2-6, will travel to 1A Williams on Friday.

It took five tries, but No. 23 Coconino got its first win of the season, beating No. 21 Shadow Mountain Monday at home. Coconino improved to 1-4 with the win in the 4A match.

The Panthers host region rival Lee Williams, ranked 13th in the 4A, on Thursday at 3 p.m.

Just like its counterparts, the Coconino girls broke through into the win column Monday.

The Panthers routed Shadow Mountain to take their first win of the season after six straight losses to open. The 27th-ranked Panthers are now 1-6. Coconino is scheduled to travel to winless 4A squad Barry Goldwater on Friday.

Flagstaff’s Jasmine Redhouse (21) contests for the ball under the basket during a game against Coronado Tuesday night at Flagstaff High School.

Flagstaff’s Sage Begay (10) looks for a path through the Coronado defense Tuesday night during her team's home game in the War Memorial Gymnasium.

Flagstaff’s Mariah Myerson (12) takes the ball to the net over Coronado Tuesday during a game in Flagstaff High School's War Memorial Gymnasium.