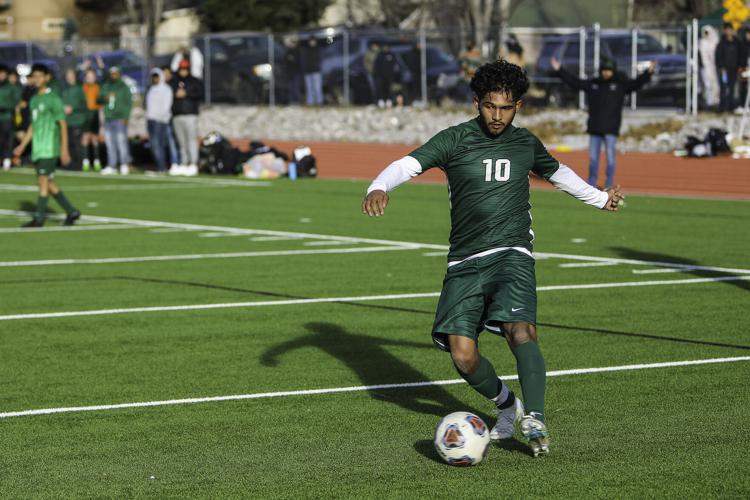 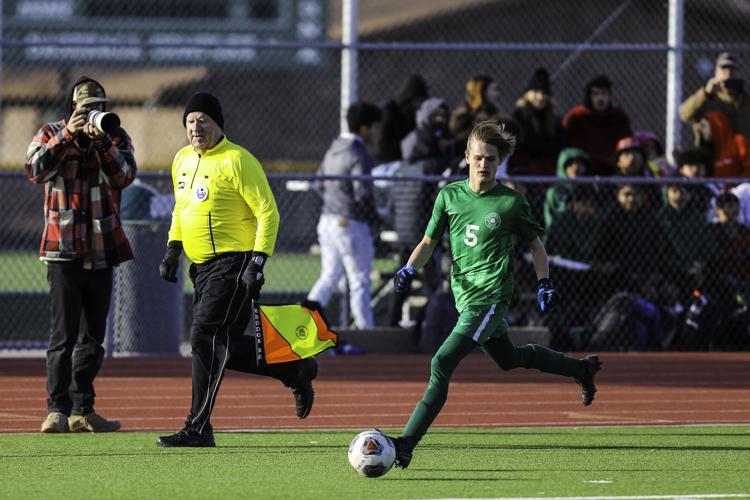 Flagstaff's Tanner Reiff (5) dribbles the ball down the sideline during a match against Mesquite Thursday at Flagstaff High School. 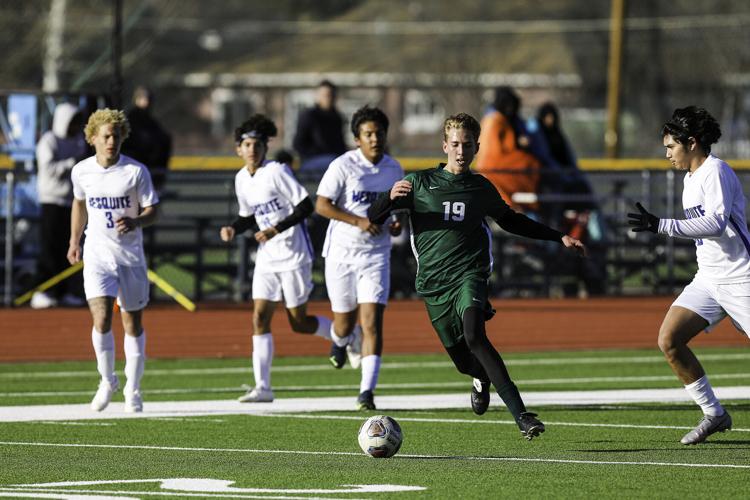 Flagstaff's Oliver Harrison (19) races his opponents to the ball during a match against Mesquite Thursday at Flagstaff High School. 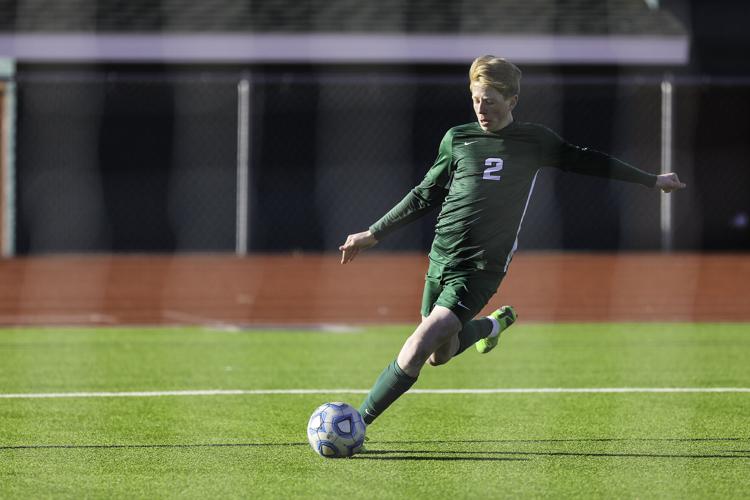 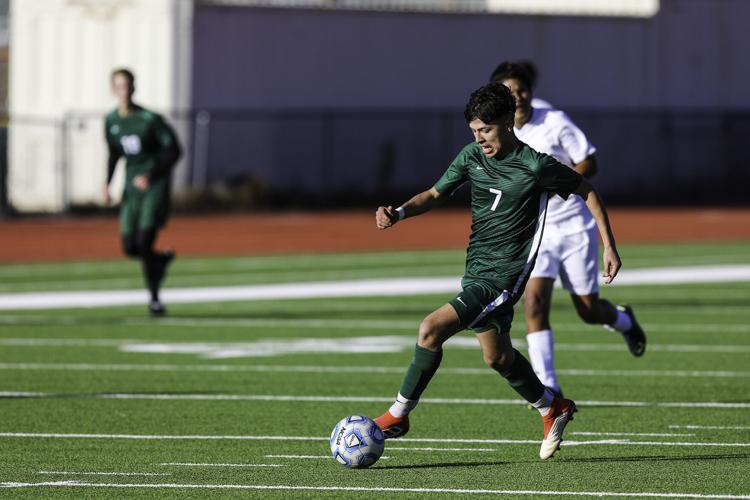 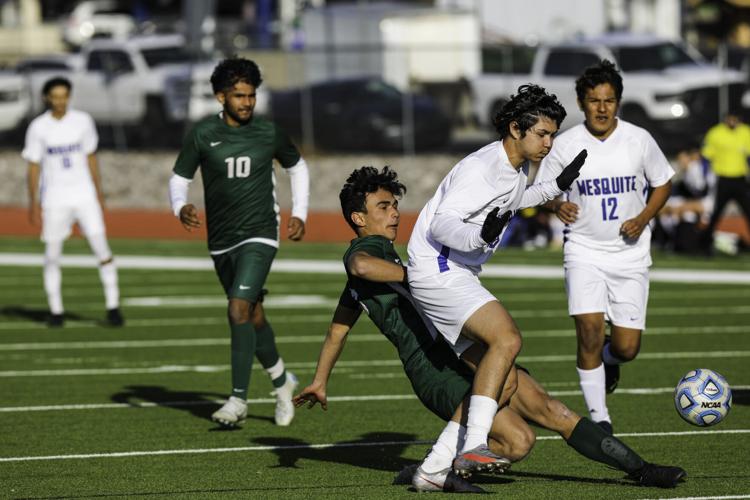 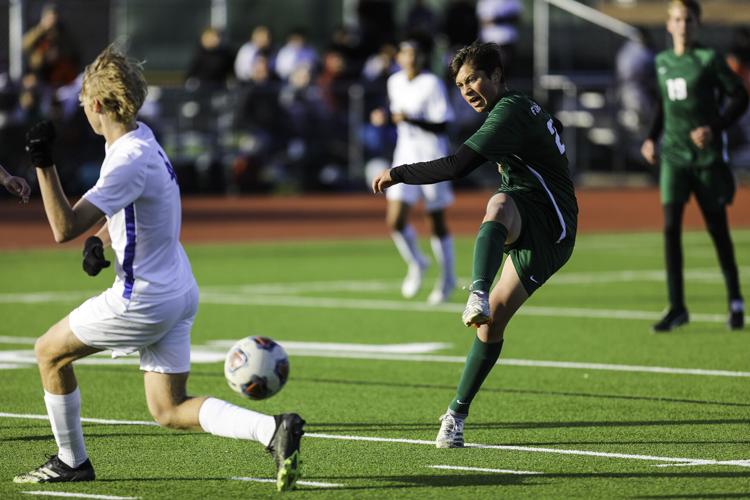 Flagstaff's Costa Abdallah (22) takes a shot during a match against Mesquite Thursday at Flagstaff High School.

The Flagstaff Eagles boys soccer team won its season opener against the Mesquite Wildcats, 2-1, on Thursday in Flagstaff.

Despite the fact that the Eagles played well defensively and scored their first goal within 16 minutes into the first half by forward Daniel Castrita Ramirez, Flagstaff coach Mike Jenkins and his players did not like the way the season started.

With 20:04 on the clock in the first period, Eagles defensive forward Cayden Jacobs was knocked out of the game due to an injury. Jacobs was carried off the field on a cart. Jacobs' injury raised a lot of concern for Jenkins because injuries cost the Eagles their chances of winning games last season. He spoke to his players after the game on injury issues.

“We lost our outside right and our outside left,” Jenkins said. "I am hoping their injury is not too serious or no broken bones.”

Both the Eagles and the Wildcats had a significant amount of injuries in the game and both sides got iced up by trainers and Flagstaff staff members. The Eagles led for most of the first half, but Mesquite tied the score at 1-1 with a goal with three minutes left.

“It was great teamwork,” Ramirez said of his goal. “Leo gave me a great rebound and I was able to shoot in my second goal of the game.”

De Diz explained how he set up the assist for Ramirez that helped the Eagles get the game winner.

“Honestly, I was bending back into the back post and Daniel was there to finish it off,” De Diz said. “We had a lot of opportunities to score more goals, but misses do happen.”

With 4:11 left on the clock in the second period, the Eagles had another opportunity to take a two-goal lead but a shot went wide right. Flagstaff held on to win in front of the home crowd.

De Diz said the team wanted to win this game for Jacobs in hopes it would keep his spirits up.

“At halftime the team gave a speech and said let's win this one for our brother,” De Diz said. “It feels great we got this win for him.”

Even though the Eagles did not start the season the way they wanted to, Jerkins is satisfied with the way his team played and complimented the way Mesquite played.

“Overall we played well and we were able to move the ball down field,” Jenkins said. “When Mesquite had their moments they were dangerous and both their striker and goaltender played well.”

The Eagles (1-0) will play another home game against Arcadia Monday.

Flagstaff won its opening match, 2-0, against Mesquite Thursday in Gilbert.

The Eagles have now won 16 straight regular season matches, dating back to March 2, 2021 against Estrella Foothills.

The Eagles (1-0) will visit Arcadia on Monday.

Northland Prep Academy had a win and a loss in a pair of games Thursday in an exhibition tournament at Williams High School.

The Spartans started the day with a 49-38 loss to host Williams before defeating Bagdad, 44-14.

Northland Prep (0-2) was set to finish the event with a game against El Capitan Friday.

Coconino dropped its first road game with a loss at Thunderbird Thursday in Phoenix.

The Panthers now hold a record of 1-1, and were set to host Seton Catholic on Friday.

The Basis Flagstaff Yeti ended its time at an exhibition tournament in Williams with a win over Greyhills Academy Friday.

The Yeti (2-1) will visit Seligman on Tuesday.

Basis Flagstaff dropped its final game of an exhibition tournament at Williams on Friday.

The Yeti (1-2) will visit Seligman on Tuesday.

IOC to allow Russian athletes to compete In 2024 Olympics

This Day in History: First Winter Olympics take place in the French Alps

This Day in History: First Winter Olympics take place in the French Alps

Flagstaff's Tanner Reiff (5) dribbles the ball down the sideline during a match against Mesquite Thursday at Flagstaff High School.

Flagstaff's Oliver Harrison (19) races his opponents to the ball during a match against Mesquite Thursday at Flagstaff High School.

Flagstaff's Costa Abdallah (22) takes a shot during a match against Mesquite Thursday at Flagstaff High School.