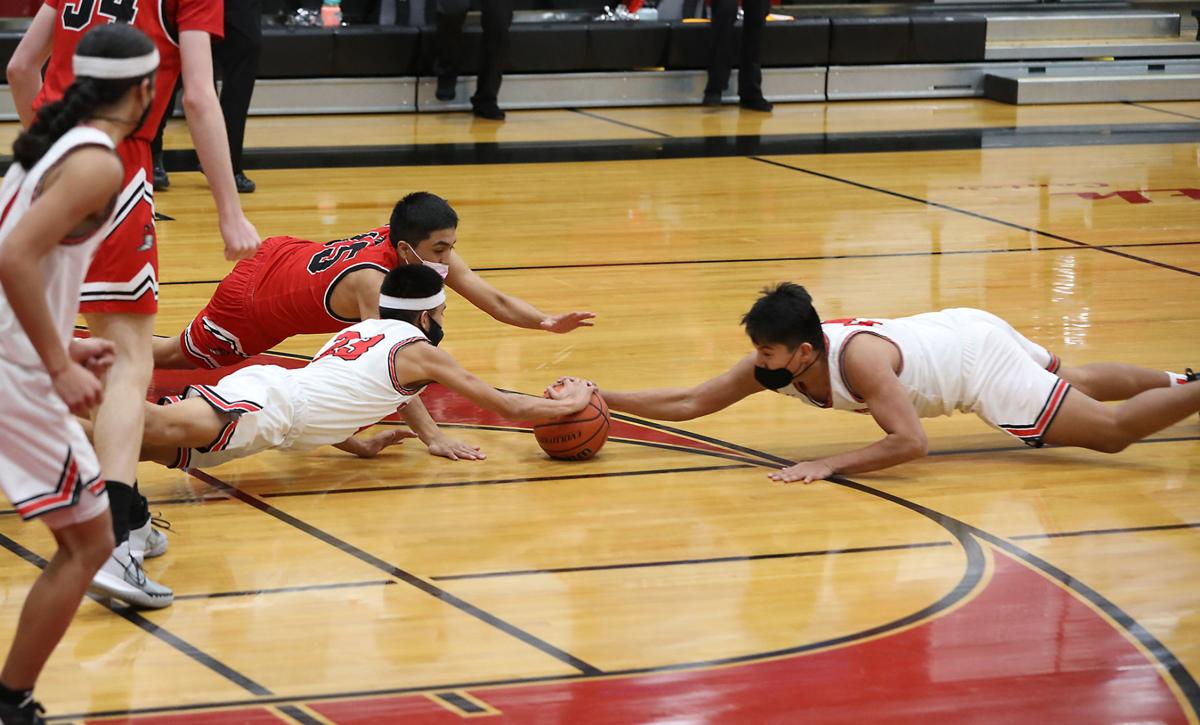 Coconino’s Jacob Begay (23) and Hayden Nez (14) scramble for a loose ball during a game against Page Saturday afternoon at Coconino High School. 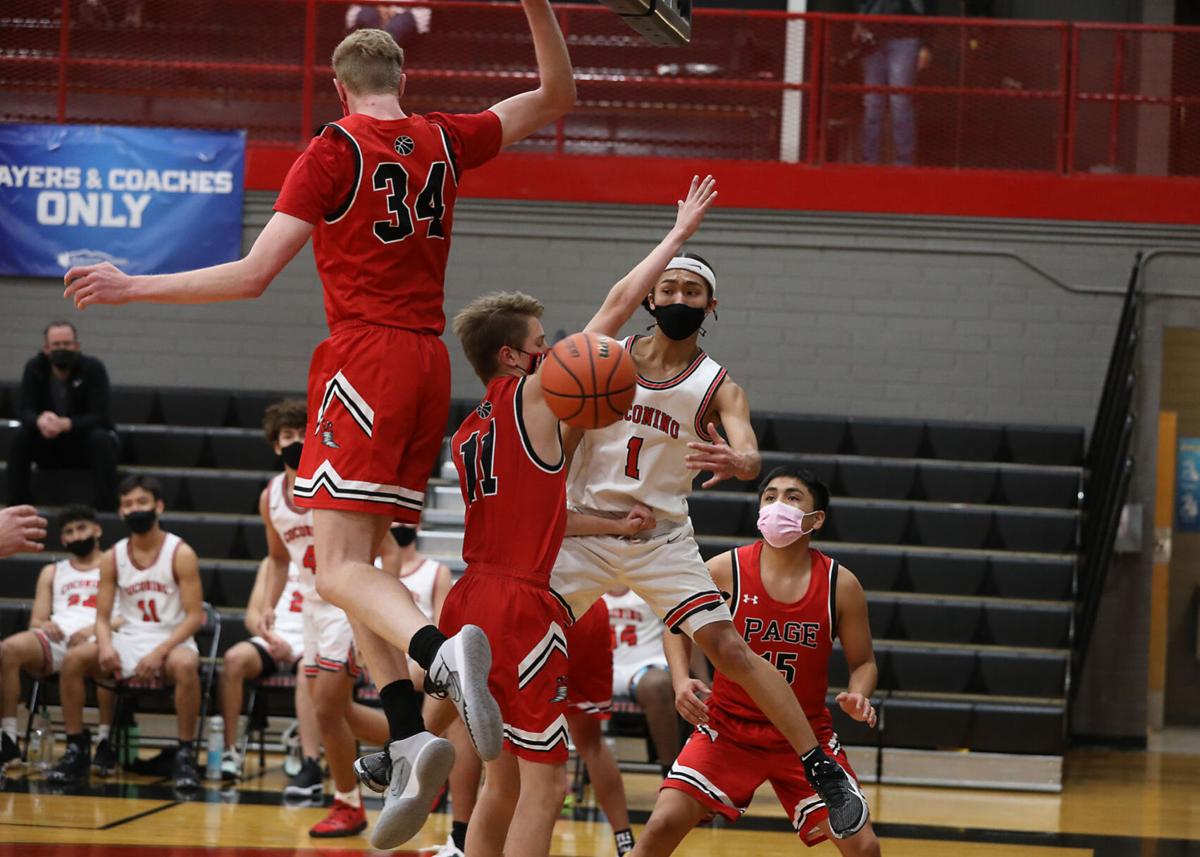 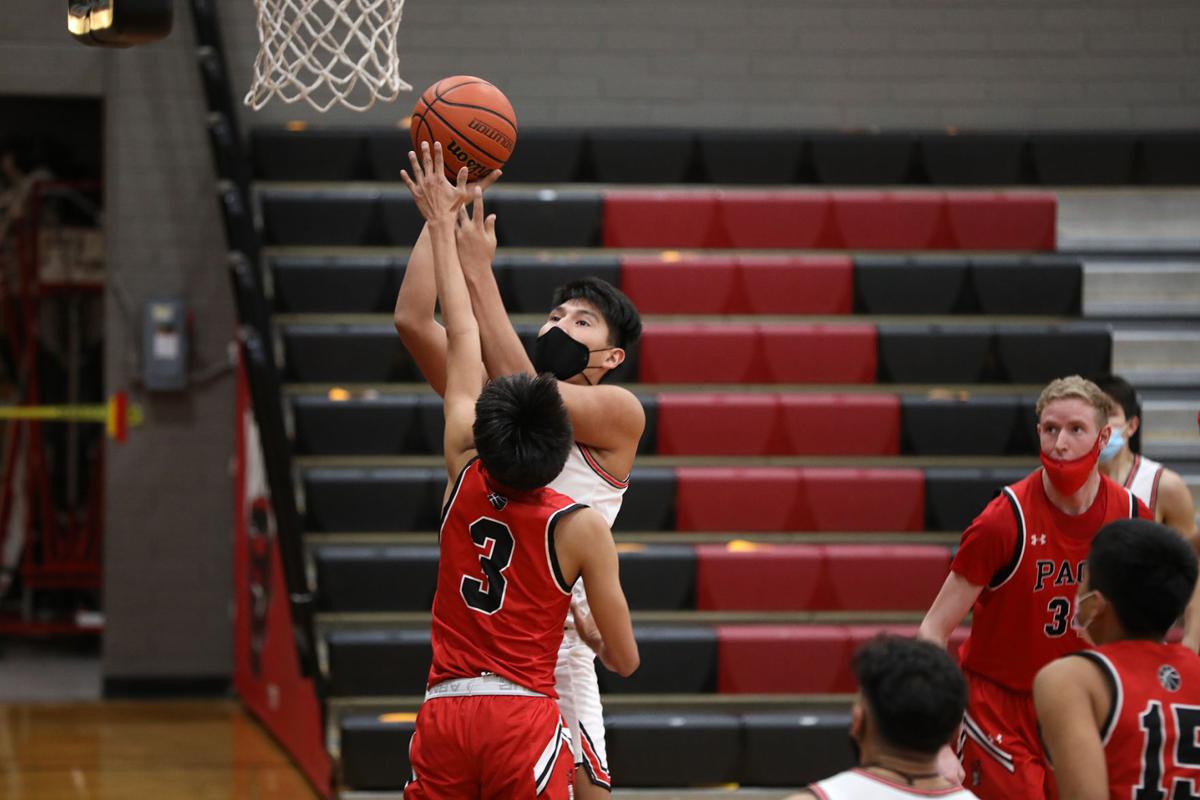 Coconino’s Hayden Nez (14) attempts a shot inside during a game against Page Saturday afternoon at Coconino High School. 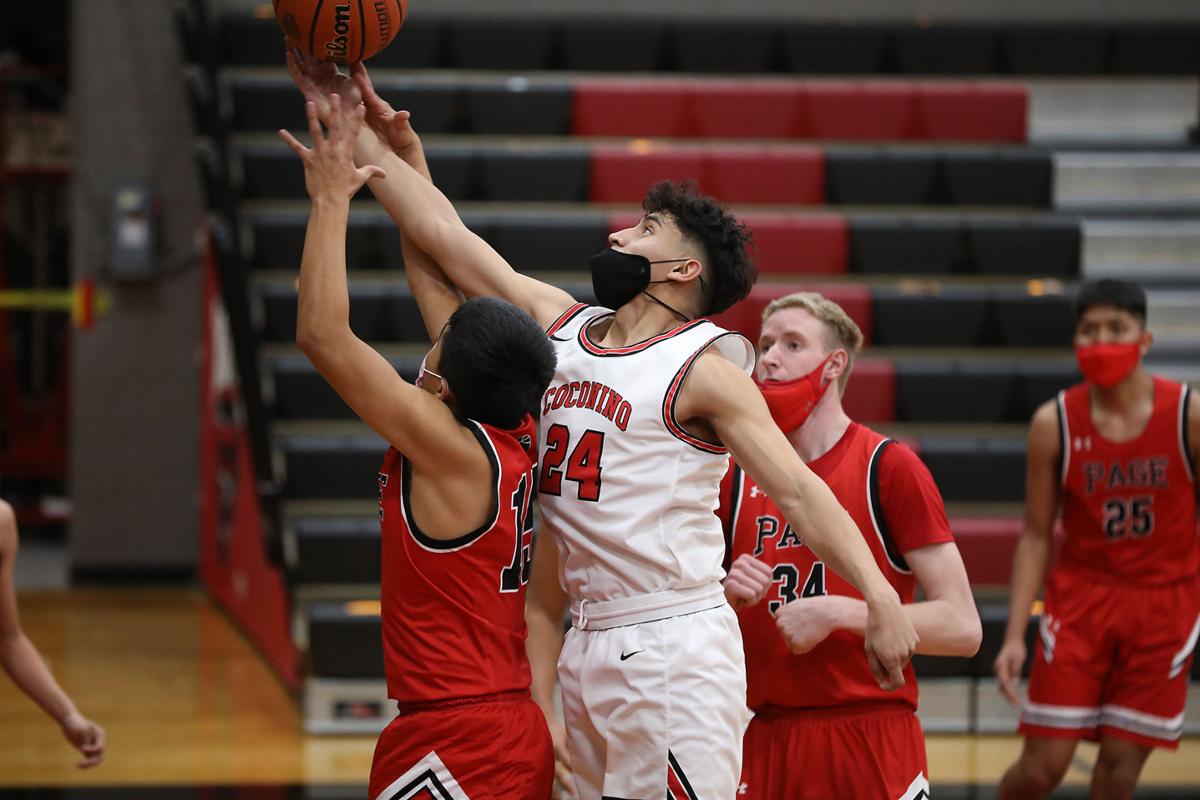 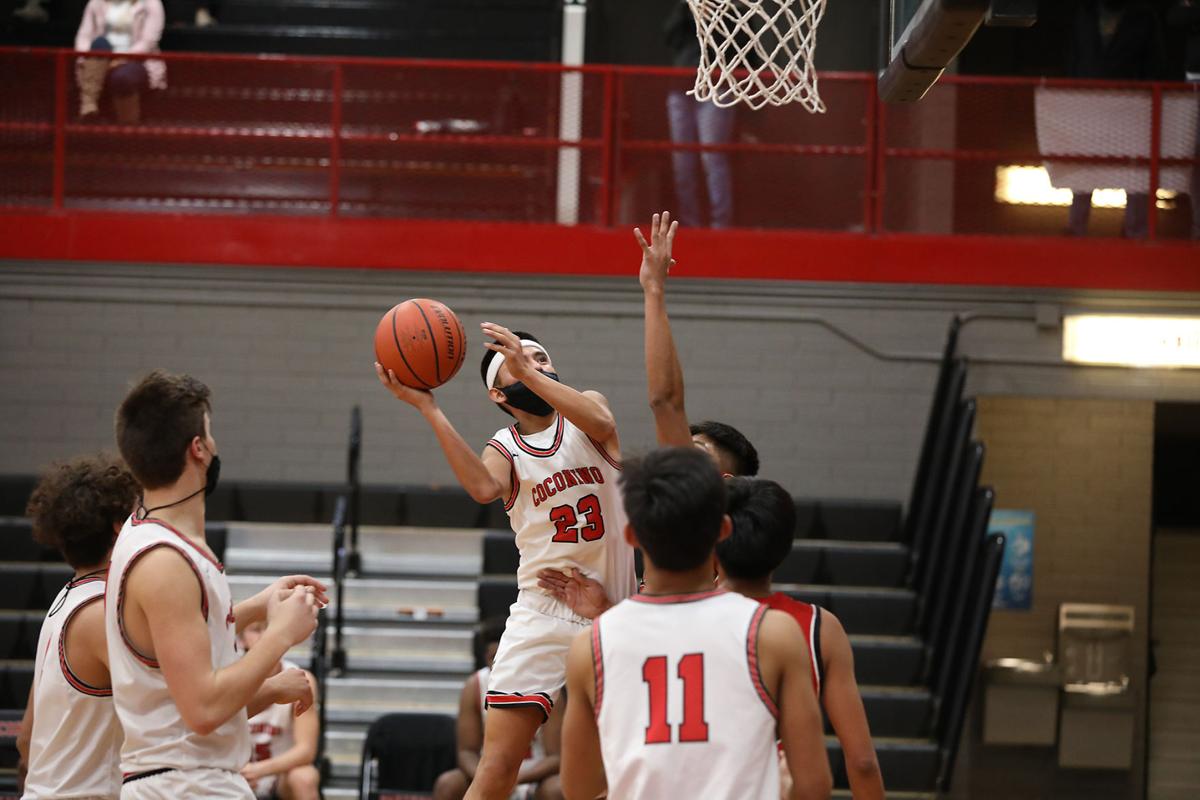 Coconino’s Jacob Begay (23) takes the ball up over the Page defense Saturday afternoon during his team's home game.

Preston Olney wasn't going to give up on getting his shot late in the game, so he shook off his defender, stepped into a 3-point shot with 1:30 remaining in the game and drilled the long look to give his team a 53-46 lead.

After the ball went through the hoop, the senior guard stared down the defender. It was the mentality the Panthers needed.

Olney recorded a game-high 23 points, including some clutch baskets late, fellow guard Jacob Begay added 14 points and the Coconino Panthers outlasted the Page Sand Devils, 63-52, to bounce back from their lone loss of the season in a Saturday matinee showdown between the northern Arizona rivals at Coconino High School.

"That was tough, we could have come out tired," said Panthers head coach Mike Moran, whose team played its second back-to-back of the season Saturday and improved to 12-1 overall with the nonconference victory.

Coconino's defenders had their hands full, collapsing on Sand Devils 6-foot-10 center Stuart Sandall to try to keep him out of rhythm and sprinting back outside to contest solid 3-point shooters as Page played an inside-out game most the afternoon. Sandall, who entered the day averaging nearly 20 points an outing, was held to 14 points, and the Sand Devils saw their five-game win streak come to an end.

Jonah Holiday contributed 20 points for the eighth-ranked 3A Conference Sand Devils in the team's second-to-last game of the regular season. Page fell to 9-4 overall, but remain at the top of the North Central Region with a 7-1 mark.

Begay found room inside a congested paint area midway through the third quarter to spark a Coconino 11-0 run that led to a 45-37 Panthers lead and eventually forced the visitors to take a timeout in the waning seconds of the period. He connected on one of his four total 3s during the outburst and teammate Mathew Reber scored four of his six total points during the surge, showing hustle beneath the basket.

Reber gave the Panthers their second lead of the second half -- and final of the game -- with a putback shot, and No. 3-ranked 4A Coconino went into the final eight minutes with a 45-41 lead.

"That's how we win ballgames," Moran said of the hustle plays his team showed that helped in the prevention of another loss.

Olney finished 5 of 5 at the foul line to help the Panthers control the final stretch, starting the final quarter with a trip to the line after getting fouled behind the arc and hitting all three attempts to give his team a 48-41 lead. After both teams struggled to click for a nearly six-minute stretch in the fourth, Olney drained the long 3, putting the Panthers ahead 53-46 and Coconino didn't look back.

Sandall finished with four blocks and Robert Smith had eight points for Page, which caps its regular-season schedule with a game at Holbrook Tuesday.

Reber snapped a Page 8-0 run in the second quarter for the Panthers, who used the bucket to go on a 7-0 scoring surge only for the Sand Devils to answer with a 7-0 burst ignited by Sandall's emphatic dunk. The visitors took a 33-29 lead into halftime.

The Panthers pick back up the task of playing for a Grand Canyon Region on Tuesday when the host Mohave to close out a three-game homestand that started with the loss to Bradshaw Mountain, which currently leads Coconino in the region title race.

The Panthers, holding an 8-1 record in the region, and Thunderbirds  (0-15, 0-10 Grand Canyon Region) are set to tip off at 7 p.m. Coconino is then set to play Bradshaw Mountain Thursday in Prescott Valley before ending the regular season with Mingus Union Friday in Cottonwood.

With 10 seconds left in a 36-all game between 1A Basis Flagstaff and 1A Salome, the former needed an answer.

Evan Hoftstetter provided it with a go-head bucket to keep the Yeti in contention for a 1A postseason berth, as 12th-ranked Basis got another win and keep its strong season going.

The Yeti improve to 9-2 overall and 6-2 in the Central West Region. They have one game left and, according to the qualification rules, it must be played for the Yeti to qualify for the postseason. The Yeti are scheduled for a Tuesday game at 3:30 p.m. at home against No. 7 El Capitan (12-1, 7-0 1A Central West).

Following a 1-1 draw in their previous outing, 4A Coconino took a rare win, beating visiting Page at home. The Panthers earned their third win and are now 3-6-1 with one more match left on the schedule at Greenway on Tuesday.

As the weight classes got higher, the win output got lower for Coconino Thursday while hosting Snowflake.

The Lobos won seven of eight weight classes from 145 pounds to the heavyweights and handed the Panthers a 54-24 loss in the meeting of the two Division III programs that reside in separate sections.

Coconino's Cooper French tallied a pin at 138 pounds and teammate Damingo Pimentel won by decision over Crew Whiting, 3-2, at 220 pounds.

Anthony Escalera (106 pounds) and Tony Hernandez (113) each finished with falls in their favor for Coconino, and Nickolas Phillips outlasted his Snowflake opponent for a 10-7 decision.

Mike Hartman can be reached at 556-2255 or at mhartman@azdailysun.com. Follow him on Twitter @AZDS_Hartman. The Daily Sun Sports Staff contributed to this roundup.

Coconino’s Jacob Begay (23) and Hayden Nez (14) scramble for a loose ball during a game against Page Saturday afternoon at Coconino High School.

Coconino’s Hayden Nez (14) attempts a shot inside during a game against Page Saturday afternoon at Coconino High School.

Coconino’s Jacob Begay (23) takes the ball up over the Page defense Saturday afternoon during his team's home game.