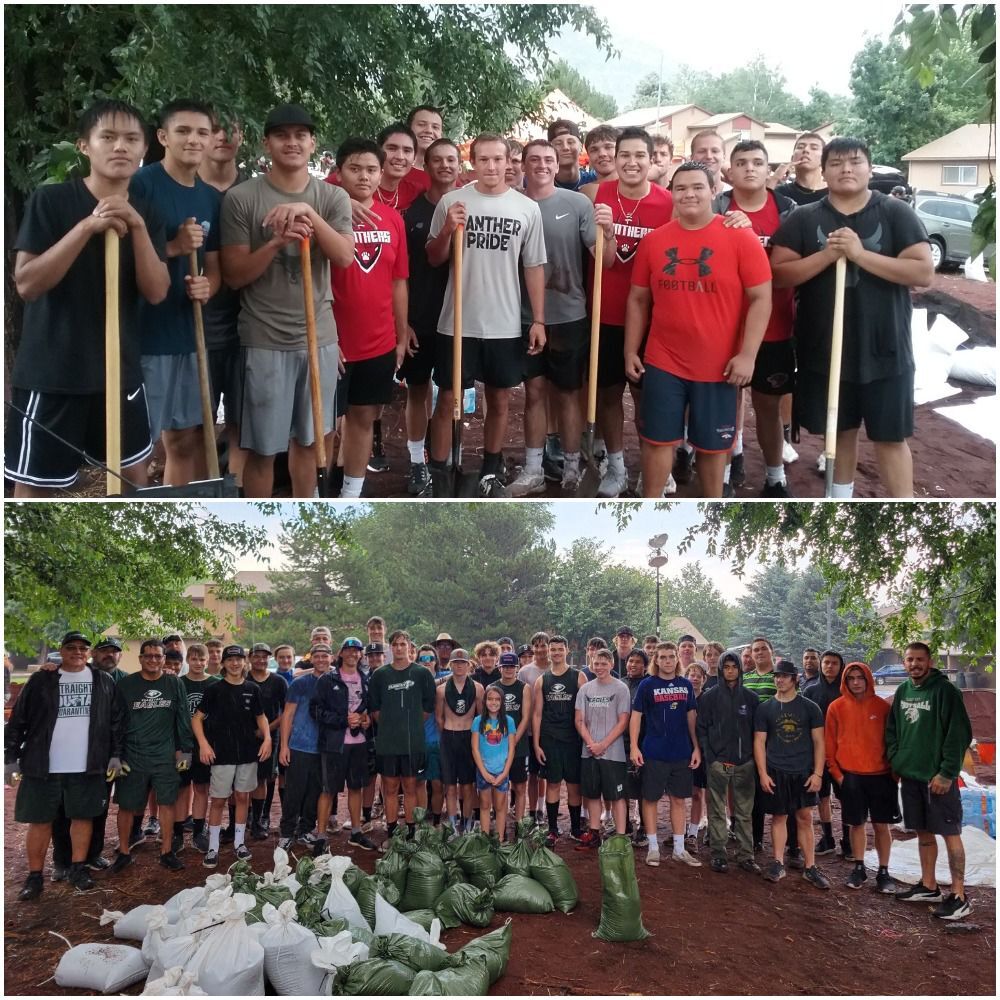 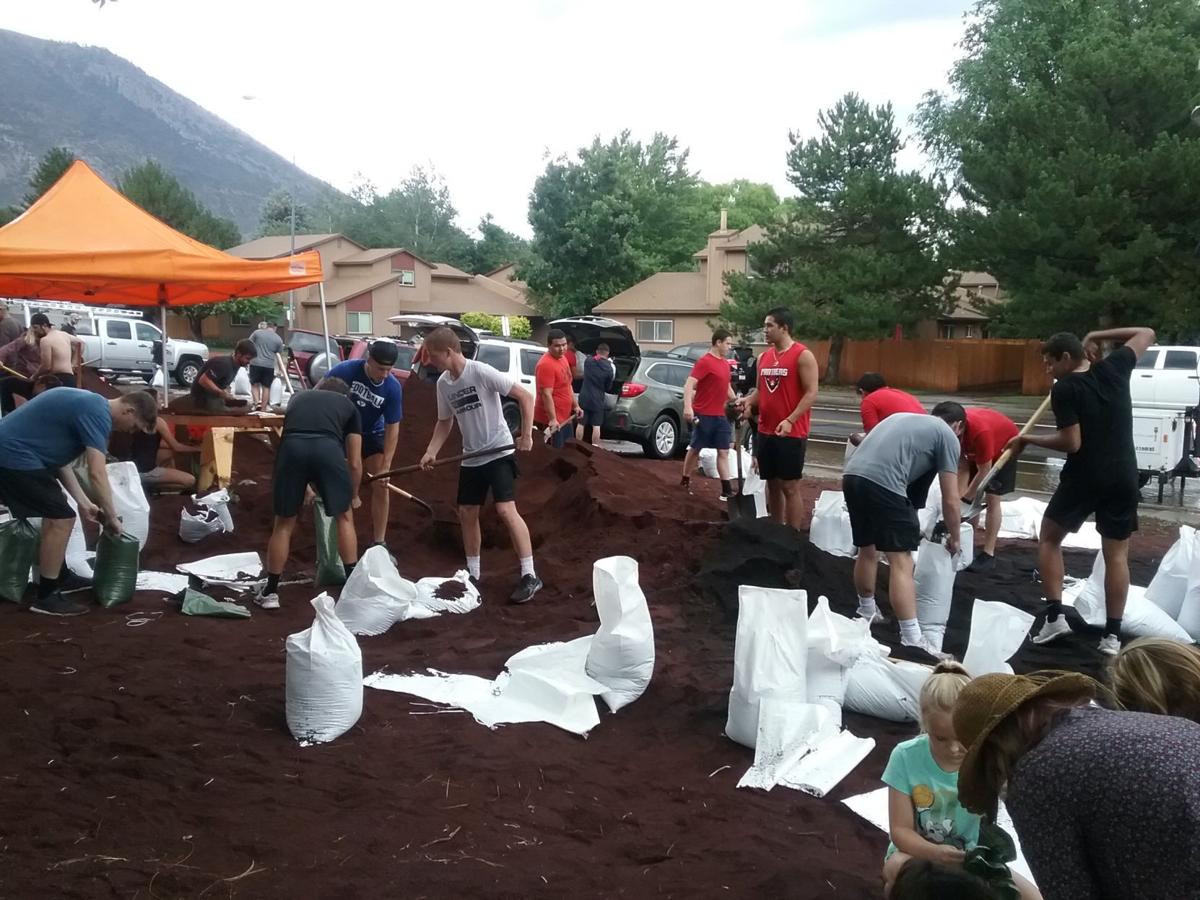 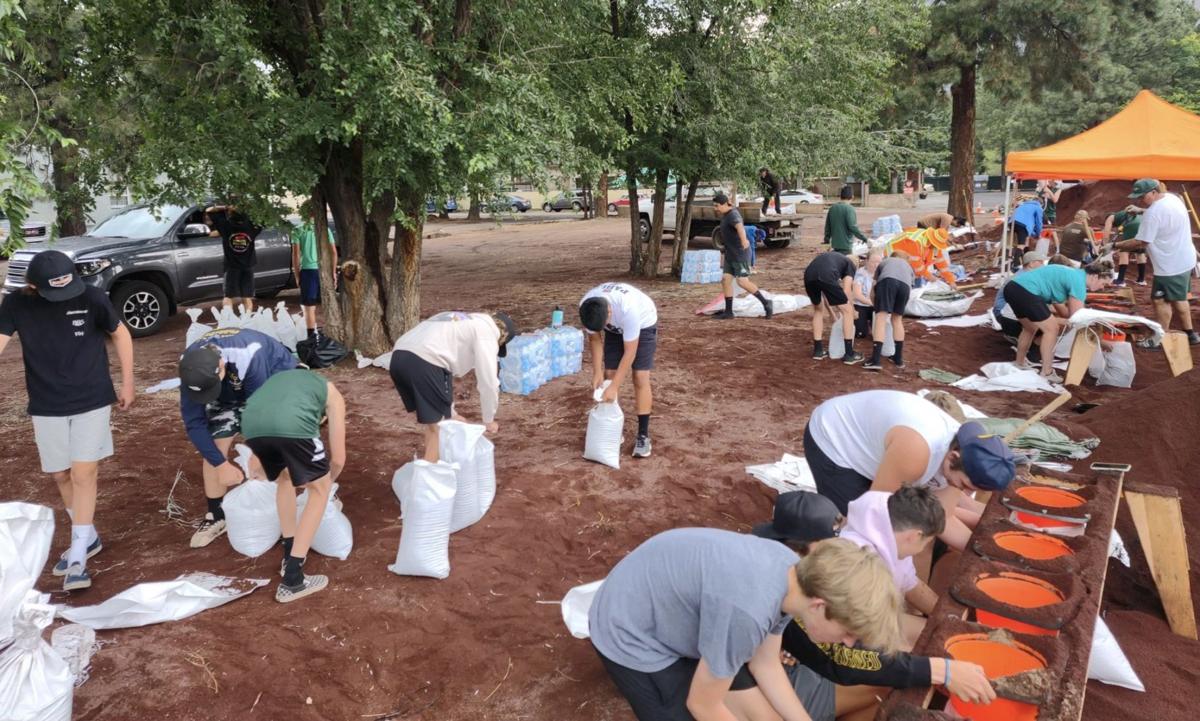 As floods have ravaged parts of Flagstaff, two groups of local high school athletes have stepped in to assist in the community. Football players and coaches from both Coconino and Flagstaff High School used their brawn for something other than the gridiron Thursday, as both teams took part in volunteer efforts to help prevent and alleviate flood damage to Flagstaff residents’ homes and businesses.

The two teams both skipped their traditional afternoon practices, separately, to volunteer at different shoveling sites, digging and loading bags of dirt for people to place outside their homes to block water from leaking in.

Coconino coach Mike Lapsley said he has seen debris all over roads on his drive to the school in the morning. Some players and other students’ homes have also taken on water damage. So after the team finished its morning workout, it headed straight to the loading site to try to make a difference.

“We basically just grabbed as many shovels as we could -- from the school, my house, wherever we could get them -- and went down there. We’d done some homework on our end about who’s doing what around town. We filled bags and loaded people’s vehicles and just got to it,” Lapsley said.

Flagstaff canceled its evening practice altogether. Coach Sean Manning instructed Eagle parents to drop their kids off at the shoveling site in the afternoon, rather than on campus. The volunteer coordinators saw a group of strong young men and dedicated coaches, and knew they would make great workers.

A few members of Manning’s staff even made deliveries to houses of people who had no way to drive to pick up sandbags themselves.

Nearly 40 Flagstaff players from the freshman to senior levels showed up to help.

“We knew the city had this facility. You bring the volunteers, they provide the materials. So we figured, why not do something?” Manning said.

Lapsley said he could tell his players took gratitude knowing their work was making an immediate impact on members of the community. He could see smiles on their faces throughout the hours of intensive work.

In fact, digging repeatedly in their workout clothes, wet from both the day’s exercise and the pouring rain, the kids were having fun.

“Our guys are just sitting there drenched, laughing about it and having a good time talking to the community about the bags and just enjoying themselves so much. It was awesome to see them interact with the people, and you could tell they loved every minute of it,” Lapsley said.

Manning echoed that sentiment. Pictures of both teams, smiling in the dirt and rain, graced the social media accounts for the Eagles and Panthers.

Flagstaff, Manning said, also gained valuable bonding time outside of traditional team workouts. He hopes those lessons translate into success off the field, but he saw a few promising patterns that could relate directly to football, too.

“You can kind of see who the future leaders are going to be. You watch them work and how they work together, how they’re acquiring respect from their teammates and friends, which is really awesome to see,” he said.

Another benefit was the reactions of the people who the two football teams assisted. Manning spoke to a woman who came back to the site four times in one day, delivering sandbags to her neighbors who did not have a way to pick them up. He said she expressed gratitude, which the players “Ate up.”

The reaction of one man, in particular, stood out to Lapsley.

“This guy is someone I’ve seen around the community, around our football team, and he came up to me and said, ‘Tell your football players that they probably literally saved my house.’ That’s a pretty strong statement coming from somebody,” he said.

As rain looks to be part of the city’s near future, both Flagstaff and Coconino football programs expect delays or other scheduling conflicts in their summer practices. They also can embrace the time to commit further hours toward volunteer service.

Coconino, for example, scheduled a session with the United Way of Northern Arizona to do similar work on Saturday morning.

Brawl breaks out between Cowboys, 49ers fans outside AT&T Stadium

Brawl breaks out between Cowboys, 49ers fans outside AT&T Stadium

These rare photos show Tom Brady from his baseball days

These rare photos show Tom Brady from his baseball days