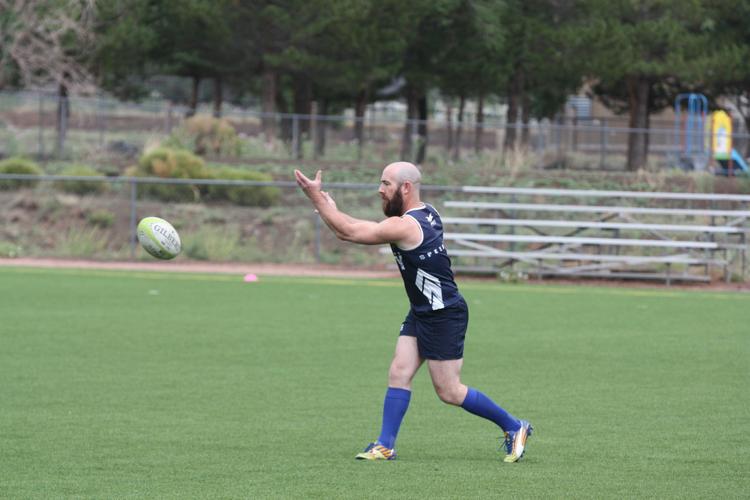 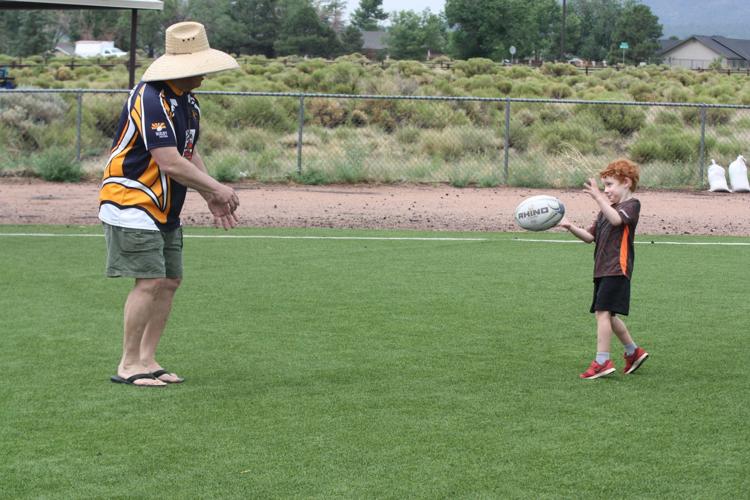 Despite an early, drizzling weekend morning in Flagstaff, a group of around 20 rugby players and coaches of various ages and skill levels met at Parks View County Park to take part in a Northern Arizona Rugby Club instructional clinic on Saturday.

Longtime players and novices alike ran, passed and drilled together in order to spread their rugby knowledge. The veterans sharpened their skills, while the new players got a sense of the game, and had a chance to talk to some local coaches about opportunities to play at a competitive level.

Following the drills, the advanced athletes took part in a scrimmage, showcasing high-level play to the newcomers.

Kevin Harris, the coach of CobraFist -- Flagstaff’s high school rugby team consisting of age-appropriate players from the city’s various high schools -- has been involved with Northern Arizona Rugby for several decades. He regularly organizes open rugby events, such as the open clinic and game, to advance the sport in northern Arizona. He has high hopes for rugby in Flagstaff.

“This is going to sound crazy, but it’s true. We want the US men’s team to win the World Cup, and that’s not going to happen until you have kids start playing at a really young age. We want to grow the game and keep having it grow,” Harris said.

Having been involved with the sport and Northern Arizona’s group for years, Harris has seen several great players come through the program. A few high school or club players have gone on to play at the University of Arizona, Utah and other major college programs.

While skill building and competitive play is a major aspect of the club, Harris also touted rugby’s applicability to the rest of an athlete’s life.

“If you really want to test yourself against another human being, rugby is your sport. It’s much safer than people think -- safety is really important. If you can succeed at rugby, you will be a successful person in your life, so we want to spread that message and teach those kids about the self confidence they get from the sport,” he said.

Northern Arizona Rugby Club hosts several clinics and matches throughout the year. Its October 10’s tournament is the crown jewel, though. Averaging around 40 of the United States’ elite squads -- one year Harris said the tournament drew over 50 teams -- it is a celebration of the sport, and a major event in growing overall rugby participation in Flagstaff.

“That’s so fun because it’s people getting ready, enjoying the sport together and talking about the upcoming seasons and everything. You can tell the people enjoy it and the energy is great,” Harris said.

For more information or to take part in a Northern Arizona Rugby Club event visit northernarizonarugby.com

Flagstaff football’s last major win didn’t just serve as a special moment for this season. The Eagles hope their latest victory is a stepping …

I was in shape for this year’s Whiskey Basin Half Marathon, and my goal was to push myself across the entire distance. I went out hard, determ…

NAU Roundup: Vikings' strong first half too much for Lumberjacks to overcome in Portland

Trying to battle back from a 22-point deficit, the Northern Arizona Lumberjacks held the Portland State Vikings to just seven points in the se…

LOCAL ROUNDUP: Yeti volleyball falls to 3A Page at home

The Basis Flagstaff Yeti volleyball team could not piece together back-to-back wins for the first time this season, falling 3-0 to Page at hom…

Hannah Petrucci was asked if she gets tired of hat tricks and other goal-scoring streaks Thursday afternoon.

The doctor who examined Dolphins QB Tua Tagovailoa has been fired