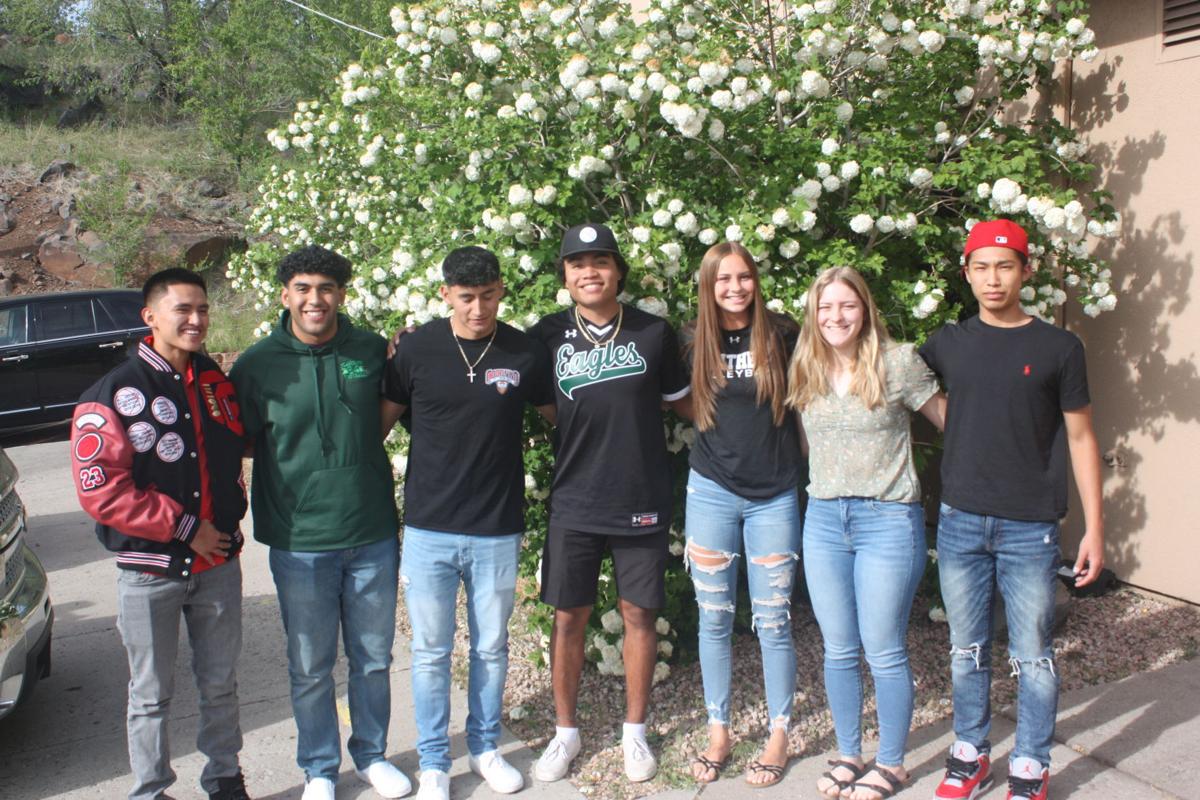 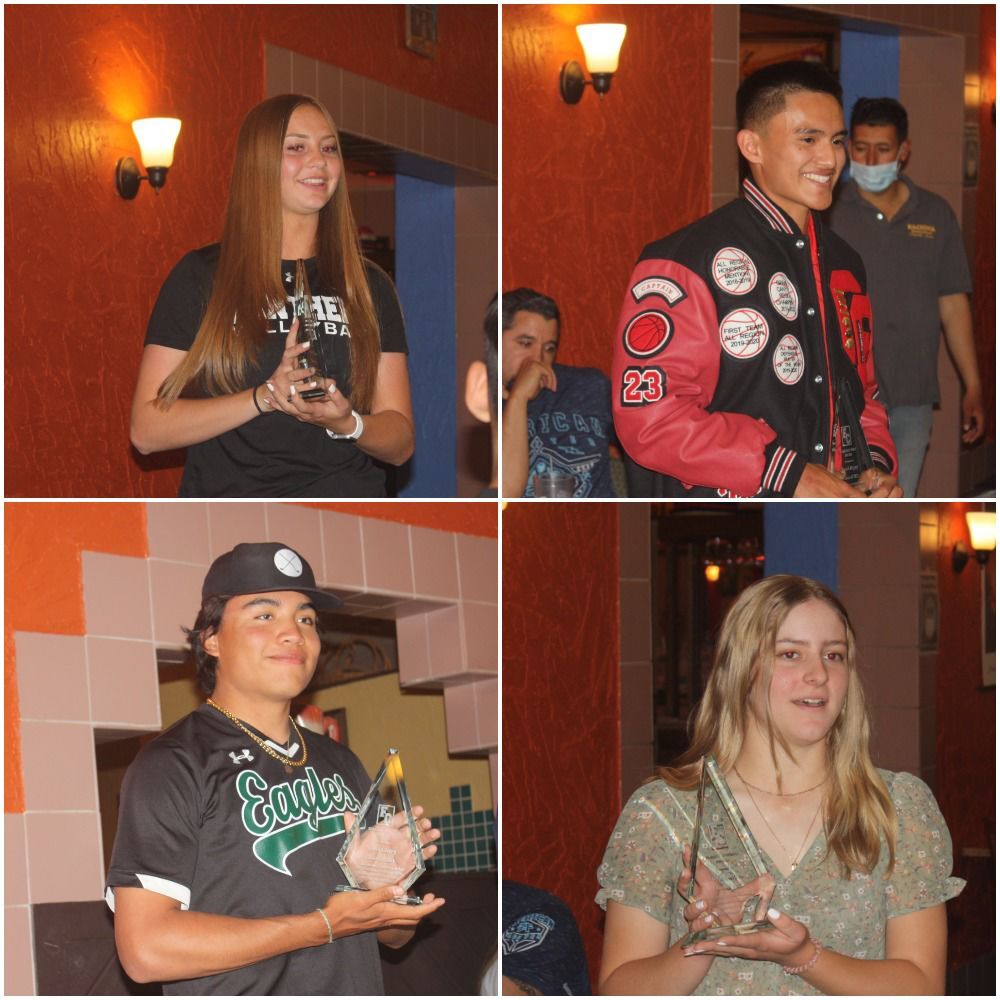 The Spirit Awards are an annual tradition that began 10 years ago by Russell Woods, the creator of FlagCoco.com -- a website fully dedicated to the rivalry between the Flagstaff and Coconino high schools. Woods crowns one male and one female senior athlete from each of the two schools, based on their performance in their respective sports seasons and overall high school careers.

“I just wanted to have a way to recognize the best rivalry in the state, so I put this together,” Woods said.

Coconino senior Preston Olney was also gifted a framed copy of the Winter 2019/2020 FlagCoco magazine, in which he was featured on the cover.

A look at the FlagCoco Spirit Award winners:

Parker was a senior leader for both Coconino’s indoor and beach volleyball teams for the 2020-21 year.

On the sand, she played in the No. 1 pair with senior Rikenna Curtis, leading the Panthers to an undefeated 12-0 regular season and the quarterfinals of the Division II state tournament playoffs. She and Curtis also reached the D-II pairs quarterfinal round, defeating Flagstaff’s ones in a thrilling three-set match in the first round.

She also led the 2020 indoor Panthers in assists (198) and was second in kills (101), as Coconino went 10-4 overall and reached the first round of the 4A Conference playoffs.

Parker will play volleyball at Yavapai College next year.

Anderson won the girl’s award for the Eagles, leading Flagstaff softball to a 16-4 record and a No. 7 seed in the 4A playoffs.

She was named Grand Canyon Region Offensive Player of the Year and made All-Region First Team. The 4A had not officially released its All-Conference teams yet, but Anderson will likely be honored there, as well.

Anderson is committed to play softball at Embry-Riddle Aeronautical University in Prescott next year.

Begay helped lead both Panther football and basketball to the playoffs in the 2020-21 seasons.

Begay had 43 tackles, two interceptions and a 94-yard fumble recovery for a touchdown -- in a 41-0 victory over Prescott -- in the football season. The Panthers went 8-1 overall and reached the 4A Conference quarterfinals. He was named Grand Canyon All-Region First Team as a defensive back.

In basketball, he averaged 11.8 points, 2.1 rebounds and 1.8 assists. Coconino went 17-2 and reached the 4A state championship tournament semifinals before falling to eventual champion St. Mary’s. He was named Grand Canyon All-Region First Team in basketball.

As of reporting, Begay had not committed to play college sports yet.

Clerry led the Eagles to a 19-2 record and the 4A Conference quarterfinal in the 2020-21 baseball season.

He was named Grand Canyon Region Player of the Year and All-Region First Team. He was also named 4A All-Conference First Team.

He will play baseball at Phoenix College next year.

Jaramillo rushed for 89 yards and recorded five total tackles in the football game between Flagstaff and Coconino on Nov. 13.

He rushed for 1,113 yards and 14 touchdowns in the 2020 football season. The Eagles went 4-4 and reached the 4A's play-in round. Jaramillo was named 4A All-Conference Second Team as a running back, and he committed to play football at Western New Mexico University.

Cardoza also rushed for 89 yards and recorded nine total tackles -- two for loss -- in the schools’ rivalry game on Nov. 13.

He rushed for 460 yards and six touchdowns and caught five passes for 305 yards and four touchdowns. He also recorded 76 tackles as the Panthers went 8-1 and reached the 4A Conference quarterfinal round. Cardoza was named Arizona Daily Sun football athlete of the year and received 4A All-Conference Second Team honors.

He also averaged 6.3 points as a starter for Coconino boy’s basketball.

As of reporting, Cardoza had not yet committed to play college sports yet.

Olney received a framed copy of the Winter 2019/2020 FlagCoco magazine, featuring a picture of himself going up for a layup on the cover.

He was named Grand Canyon All-Region First Team and Region Defensive Player of the Year. Olney is committed to play at SAGU AIC.

NBA plans to start the new season in October

After another successful campaign in the 2020-21 winter season, the Flagstaff Eagles girls basketball team began the first step of the upcomin…

High Country Running: It's good to be home

A temporary relocation to the Phoenix area took me away from the high country for several months this past winter, but I kept up my running ha…