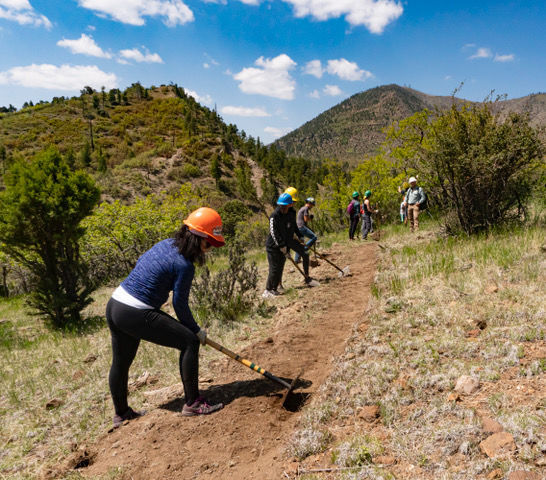 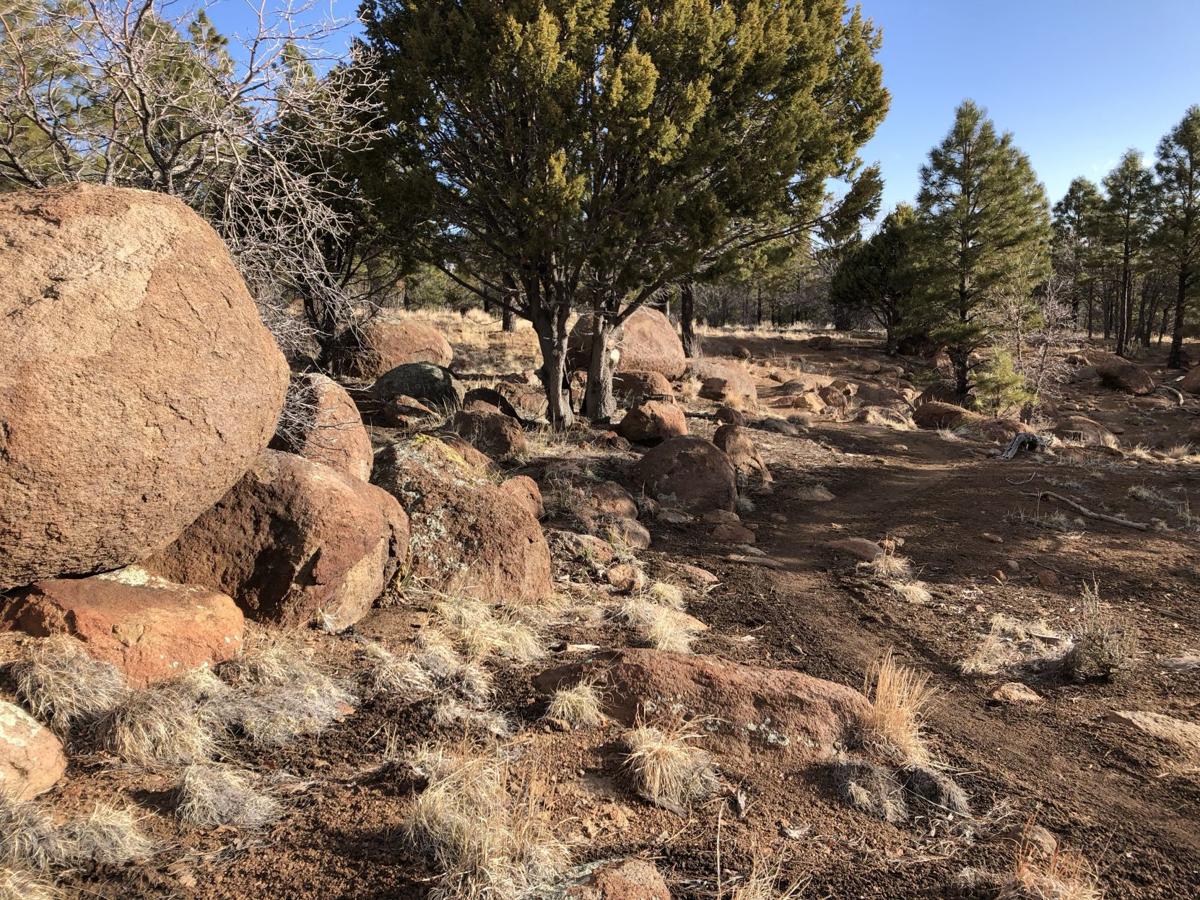 The realignment of the Little Elden Trail winds through rock gardens with large boulders. 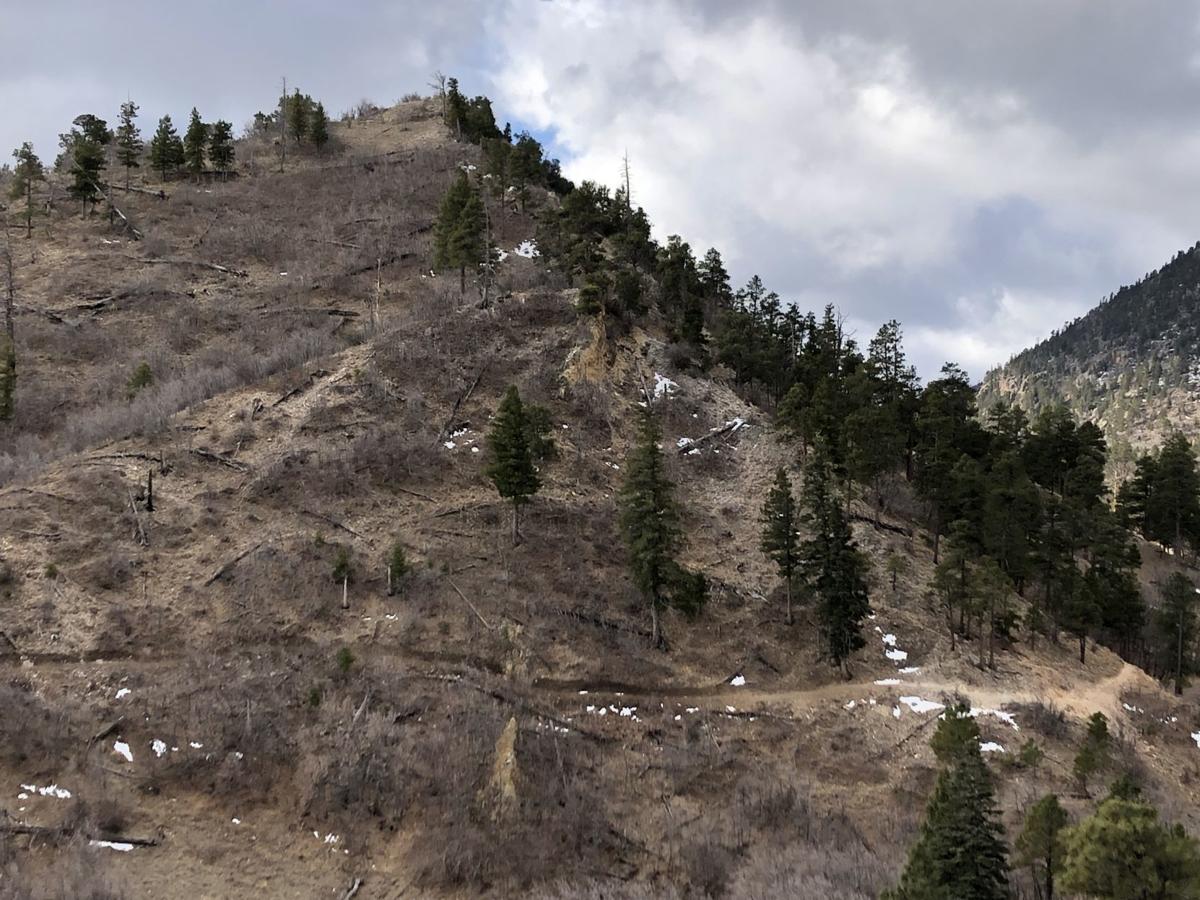 This view of the yet-to-be-opened realignment of the Little Elden Trail -- note the singletrack starting on the lower right part of the hillside -- will give users a more enjoyable experience. 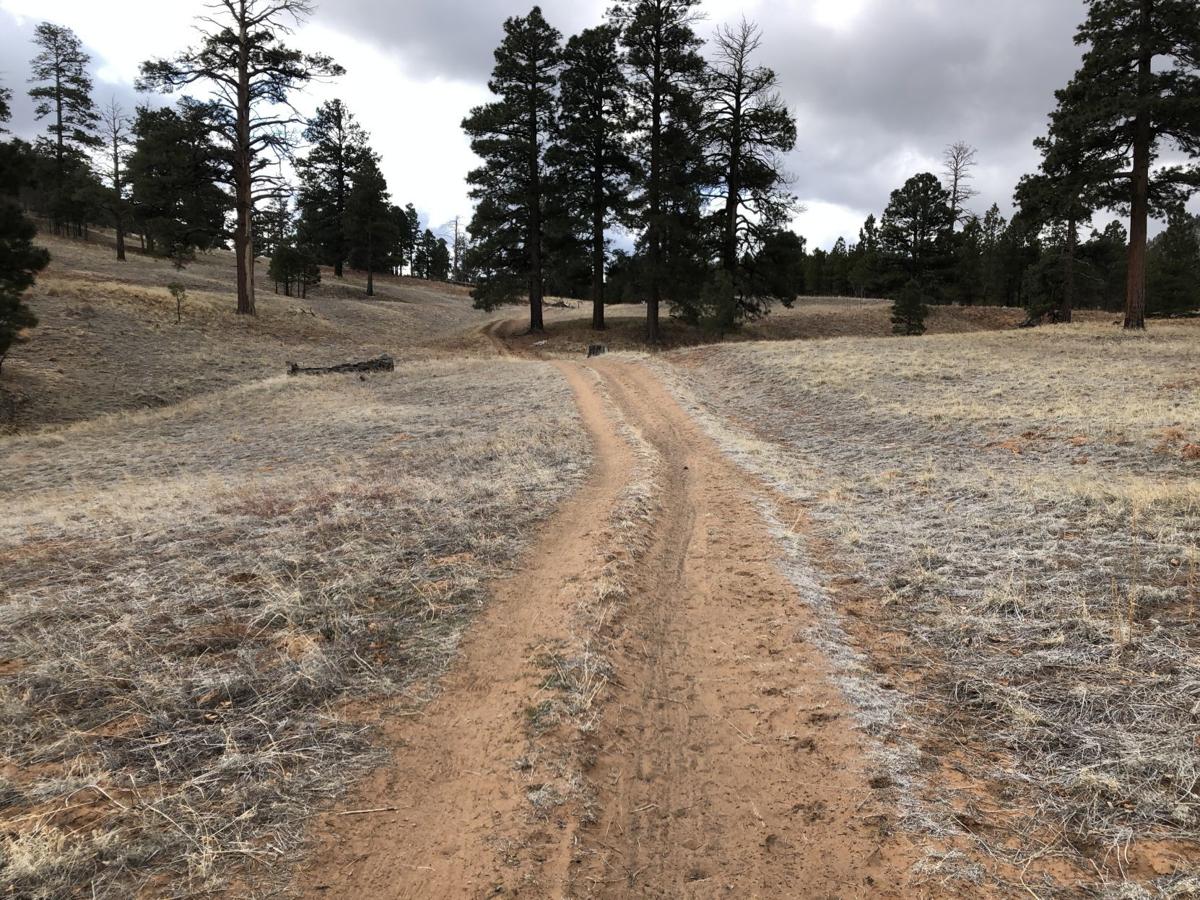 This is the original stretch of the Little Elden Trail, rather boring and prone to erosion, that will be eventually replaced. 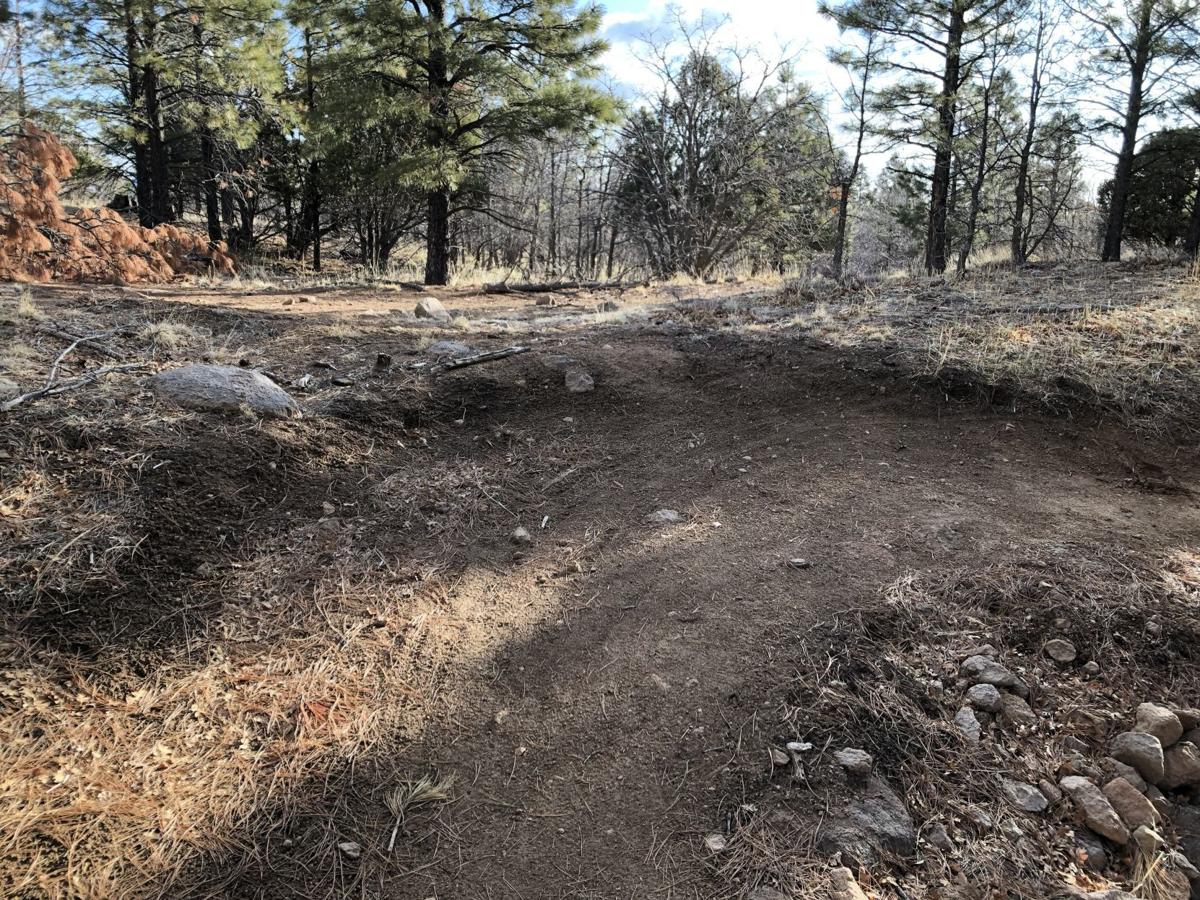 At some points, the new section of the Little Elden Trails -- see the curve -- come close to where the original fire road (above it) remains. 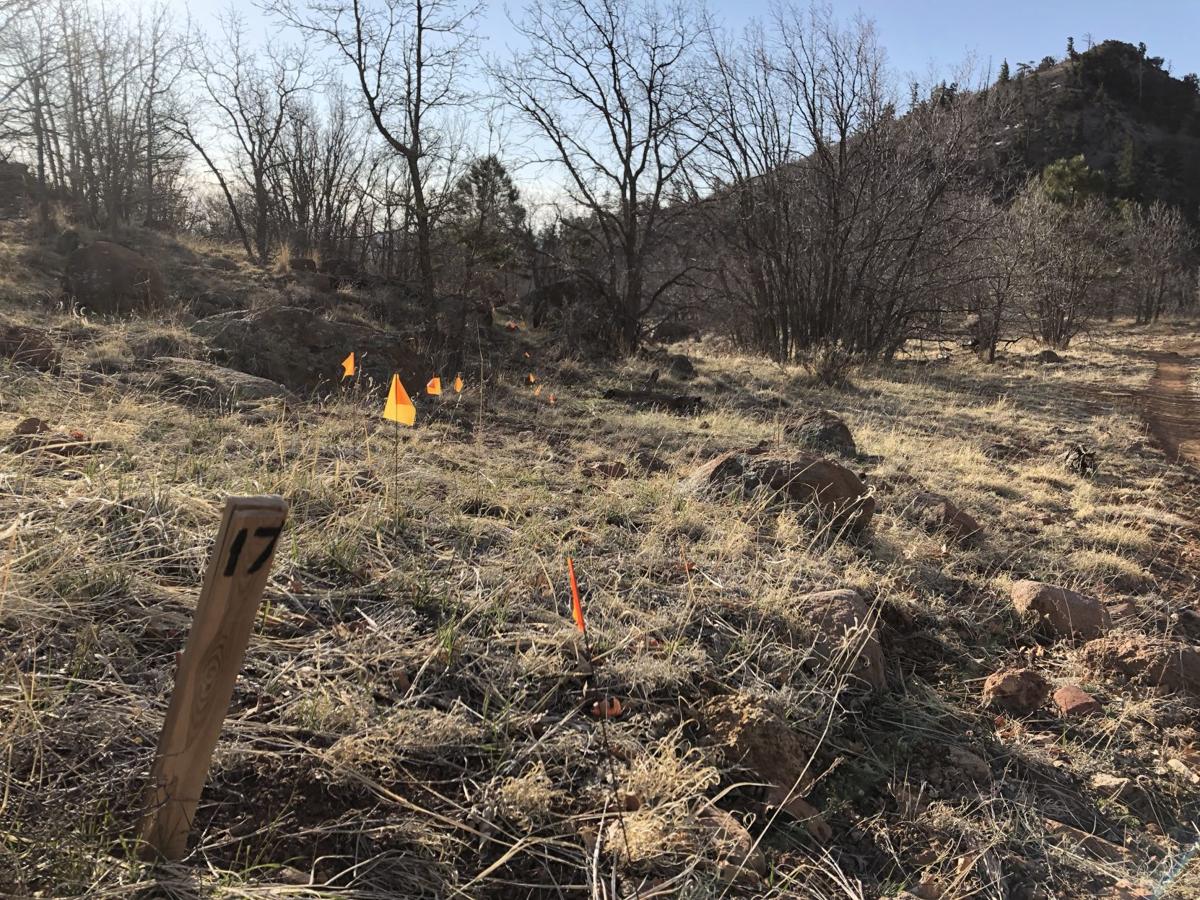 Flags denote where the new segment of the Little Elden Trail will commence. 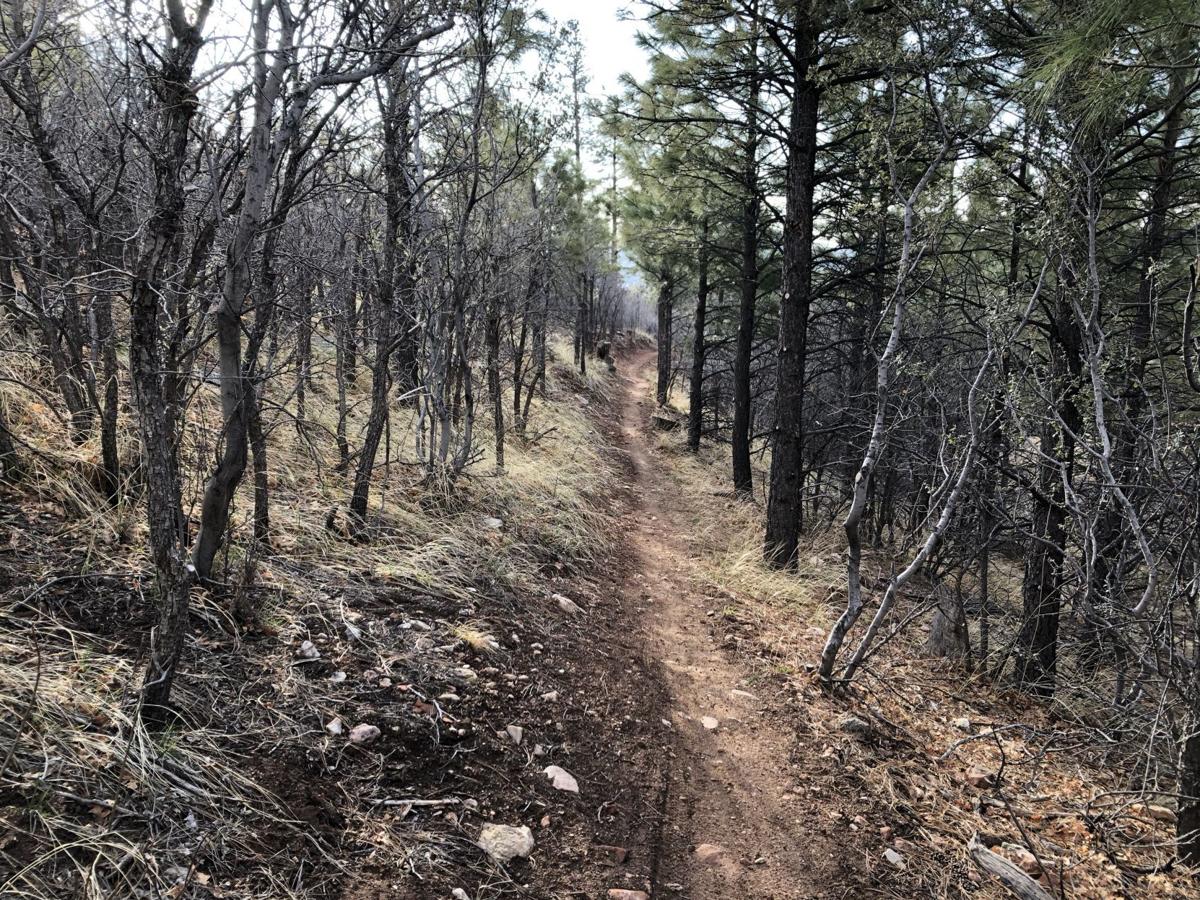 The new section of the Little Elden Trail hugs the hillside and is tree-shaded. 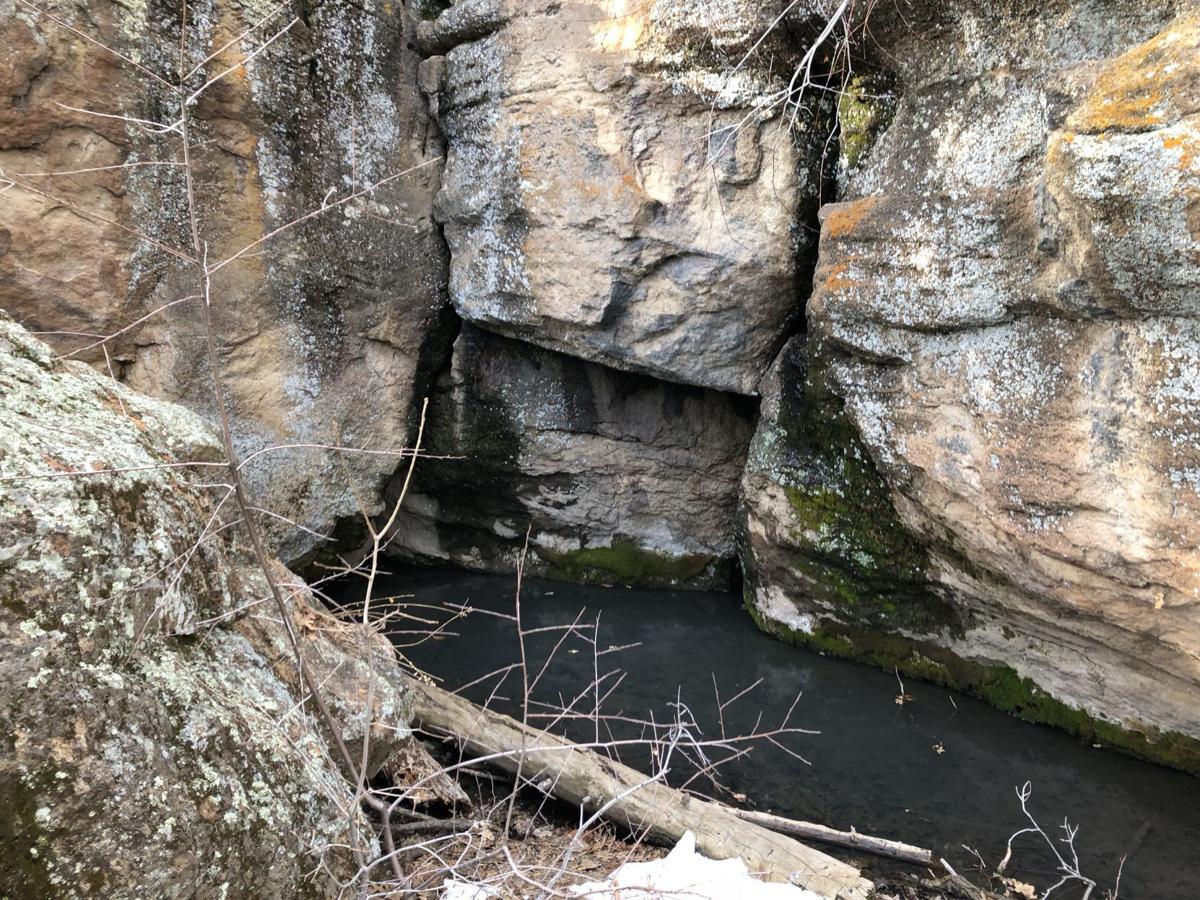 One highlight along the way is Elden Spring, a short diversion from the main trail.

One disadvantage of being a relative newcomer to Flagstaff, and its peerless trail system, is that I cannot fully appreciate the improvements made -- and still being made -- on the Little Elden Trail meandering through the eastern slopes of the mountain.

But I’m told by trail veterans — and I have no reasons to doubt them — that Little Elden used to be boring. Sort of the trail equivalent of vanilla ice cream, perfectly acceptable but bland and far from memorable.

“A lot of trails around here are the results of short cutting and using old road beds,” he said. “Little Elden really fell prey to that. Some were fire breaks or logging roads, maybe even remnant lines from the (1977) Radio Fire. It really wasn’t a fun trail. It went straight down and straight up in and out of gullies. It was really prone to erosion.”

Now, thanks to cooperation between several agencies and outdoors organizations, including Quintile’s group, Little Elden is well on its way to being a trail worth remembering — Ben & Jerry’s Caramel Chocolate Cheesecake, if you will.

From its start at the junction of the Sandy Seep Trail (which serves as the trailhead for this jaunt) to Elden Springs and beyond, Little Elden has been forged anew, rerouted and contoured to give all trail users a fun experience replete with undulating singletrack that wraps around hillsides, views of Doney Park and the hills in the distance, and boulders along the path that a weary hiker can sit atop and contemplate life’s imponderables.

Most of the work has been completed almost a year now, but there’s still about a half-mile section that volunteer workers (among them, the fetchingly-named Trail Faeries) have yet to complete. You can spot the surveying flags shortly beyond where Little Elden intersects with the Heart Trail, which is also being realigned.

Judging by where the flags lead, this looks to be the cherry atop the ice cream. This new stretch, said to be singletrack, will curve around a hillside, punctuated with alligator junipers and other verdant foliage. Compare that to the current stretch: a sandy, flat old jeep road that Quintile says is prone to erosion and other depredations.

When it's completed — and the trail work is in limbo during the coronavirus outbreak — the trail will prove a more enjoyable experience. As Quintile said, the original Little Elden, cobbled together from other, non-outdoors paths, was not sustainable.

“We get into conversations with folks who say, ‘Well, we should be maintaining the existing trail,’” he said. “It’s not necessarily the best practice. Every year, that old trail will erode because it’s poorly aligned. You can’t fix it shy of pouring concrete or armoring with rock slats -- which isn’t conducive to equestrian use.

“It’s not just as simple as maintaining what we have. We look forward to the opportunity when we can take these trails that are poorly laid out on landscape, and align them in a way that’ll be sustainable and require far less maintenance over the years. Build a trail that’ll shed water and hold up over time.”

Sustainability aside, the goal in the realignment was to make Little Elden attractive.

“There are places on the new Elden line where you come around a turn and all of a sudden there’s this amazing view of buttresses, those big rock walls,” Quintile said. “Or Little Elden will wrap around and you’ll pass a neat little rock garden.”

Because the groups doing the bulk of the work are mountain bikers, the layout pays particular attention to what Quintile calls flow.

“The other trail had all these herky-jerky turns; it’s not going to be any fun to ride,” he said. “That flow tries to incorporate different user groups. We don’t want to have a big old straight shot with a blind turn, where there might be a horse around the turn and a mountain biker comes around really fast. We build line of sight and checkpoints to slow a biker’s speed before the turn.”

As it stands now, the Sandy Seep-Little Elden out-and-back, roughly 8 miles, has a little bit of everything.

From the trailhead, the trek starts rather prosaically. Sandy Seep climbs about 225 feet in a mile and half; it’s a gradual climb but sort of a slog. Shortly after the junction with the Christmas Tree Trail, the terrain flattens (that’s the old trail which soon will be diverted).

It’s easy to tell when the new section of Little Elden begins. Sure, the singletrack has got that new-trail brushed look, but it’s most noticeable by the curves and dips and contours along the hillside.

You can take Little Elden all the way to Schultz Tank, if you like; that’s 4.7 miles one-way. A less ambitious option to take Little Elden for 2.4 miles and make Elden Springs your turnaround. And where is that spring? It took me a while to find it, but it’s located up a small hillside past a barbed-wire gate. It’s a lovely pool that, in late March, was running high.

Then you can retrace your steps back to Sandy Seep, this time going downhill.

It’s an enjoyable jaunt — and relatively little used, compared to other Flagstaff trail attractions. Good to know in this time of social distancing.

Directions to the trailhead: From downtown Flagstaff, take Highway 89 east past the park ranger headquarters. Look for a brown trail sign and make a left to the parking lot on the west side of Highway 89.

The route: From the trailhead, head west for 1.5 miles to the junction with the Christmas Tree Trail. Veer right on Little Elden, passing the junction for the Heart Trail. After 2.4 miles, make the turnaround at Elden Springs and retrace your steps. For a longer trip, continue to Schultz Tank (4.7 miles, one way).

Trail use: Open to runners, hikers, mountain bikers and equestrian.

The realignment of the Little Elden Trail winds through rock gardens with large boulders.

This view of the yet-to-be-opened realignment of the Little Elden Trail -- note the singletrack starting on the lower right part of the hillside -- will give users a more enjoyable experience.

This is the original stretch of the Little Elden Trail, rather boring and prone to erosion, that will be eventually replaced.

At some points, the new section of the Little Elden Trails -- see the curve -- come close to where the original fire road (above it) remains.

Flags denote where the new segment of the Little Elden Trail will commence.

The new section of the Little Elden Trail hugs the hillside and is tree-shaded.

One highlight along the way is Elden Spring, a short diversion from the main trail.