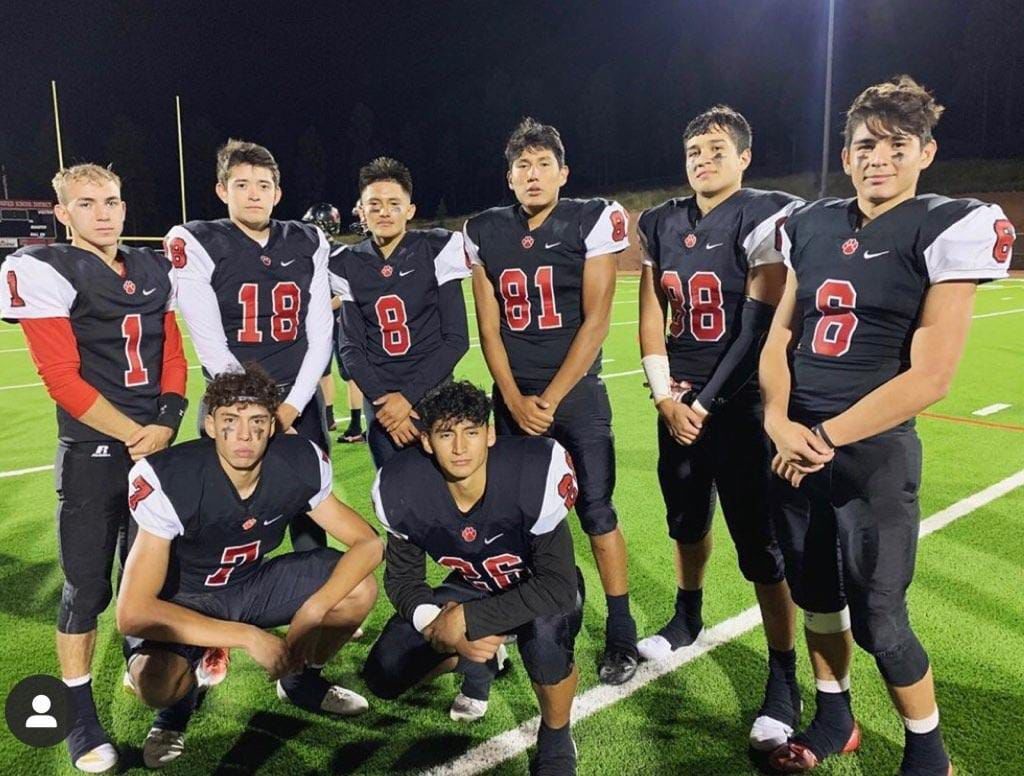 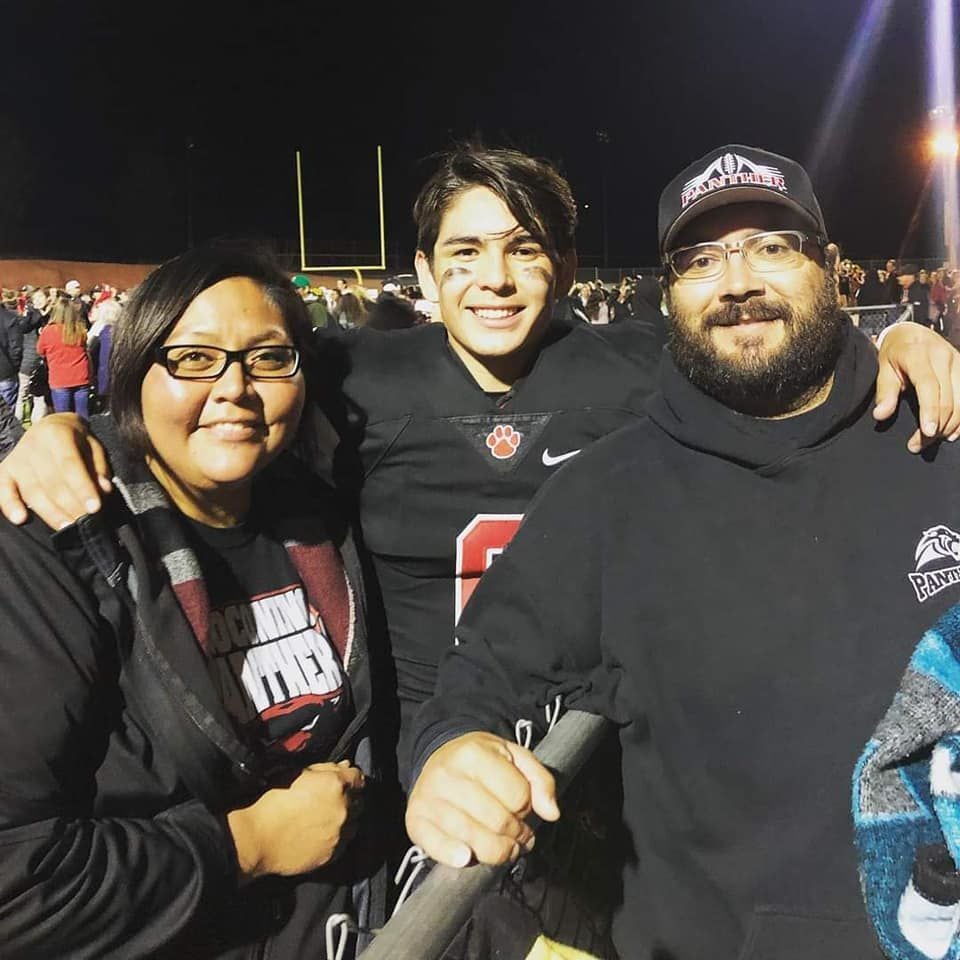 Jeremy and Jessica Jaramillo sat in the stands during the Coconino Panthers Week 1 football game last Friday against Marcos de Niza like they have countless times. The two yelled as if their son was on the field, fighting for the win with his team — his family.

But this time was different as the family continues to push through their son Jonathan's, No. 6 on the Panthers, traumatic accident.

Jonathan, 16 and a junior linebacker for Coconino, suffered two skull fractures and internal bleeding after he fell out of the back of a moving truck in the Coconino High School parking lot Monday, Sept. 28. He was helped by friends and witnesses as his parents rushed to the school and medical responders arrived to take him to Flagstaff Medical Center.

His parents recalled the doubt they had in the hospital — but then the relief as the days continued and Jonathan's health started coming back slowly  and he showed signs of his normal self.

They had been to games while Jonathan was hurt and still in attendance on the sideline, but Friday was nowhere near the same for the close-knit family. Being there without Jonathan was one of the hardest things Jessica and Jeremy have done.

“It was very emotional,” Jessica said, adding they stopped multiple times on the way to Cromer Stadium. “It took everything in our being to be there.”

While Jeremy and Jessica sat in the stands supporting the Panthers, Jonathan also couldn’t stay away from the field. He listened in to the broadcast of the game from the hospital, cheering on his squad with his grandmother next to him as the Panthers beat Marcos de Niza 29-28 in overtime.

Jonathan was at the school participating with friends at “Reverse Ditch Day” when the accident happened. Jeremy recalled during a Wednesday phone interview that barely 30 minutes before he got the call about his son’s accident he had just seen Jonathan, dropping off a drink from Dutch Bro’s for him.

Across town at her job at the Coconino County Detention Center, Jessica was scrambling and doing all she could to get away from work to make it to her son. Neither expected the injuries to be as serious as they turned out to be, thinking he had just bumped his head and may have a concussion or a few bruises and scrapes.

What Jessica and Jeremy soon learned was that Jonathan had a seizure not long after hitting his head on the asphalt and those around -- many his closest friends -- did what they could to hold him from hurting himself any further until medical personnel could arrive.

The quick reaction from those around, and because they didn’t want them to have any more potential guilt following the accident, is why Jonathan’s parents were adamant that those involved in the accident shouldn’t be punished.

They knew the kids who were with Jonathan. They are Jonathan’s “boys,” and are family to the Jaramillos like their own children.

“When I got to the accident, I went up to them, I gave them a hug and then went to the hospital,” Jeremy said. “But I told them, ‘We are not blaming anyone. We understand that it is an accident.’ … We welcomed them here any time before the accident and even now we told them, 'If you want to come and see him just come over.'”

That is why Jessica and Jeremy decided, even after multiple stops on the way to Cromer Stadium, to go to the Week 1 game. They sat in the socially distanced stands and Jessica yelled as much as she normally would, as the two showed support to Jonathan’s friends and coaching staff.

It was emotional and tough for them to be at Cromer Friday night, but the two knew it was a way they can show their son’s friends they support them.

Jeremy and Jessica joked that all Jonathan was talking about during the hospital stay is football.

Even in the early stages of his recovery, Jonathan would recite plays or tell nurses to cover gaps in coverage as if they were his teammates on defense. He even said it himself he wants to get back to the field as soon as he can.

“I will get better. I know I will,” Jonathan said. “And when I do I will get back into the game and do the best I can.”

His parents want that, too, but want to be cautious. Jonathan has played sports for almost as long as he has been able to walk.

From Little League baseball, youth football to basketball, sports have been his identity. Since he was a little kid, Jonathan has wanted to play in the NFL.

Jonathan could make it back out on the field in his No. 6, but his parents have taken a hard stance that he will need to work on his recovery before even getting close to the field.

They are in the process of finding a physical therapist who has a sports background to help Jonathan achieve his goals of getting back to doing what he loves. Jonathan and his family know the his road to recovery will be long and difficult.

“They told us with his age and being young, you can’t predict what will happen,” Jeremy said. “Everyone has reassured us that he is young and his young brain is able to overcome a lot of stuff compared to an older person. It’s one of those things where we just have to wait and see. But the progress he’s been making is insane -- it’s amazing.”

Jeremy said it's been up and down since Jonathan has been home. He has good days, such as on Wednesday when he woke up before his parents. He was ready to take his siblings to the student learning centers -- which his parents quickly said they would handle. But then Jonathan has days when eating is a struggle.

Due to the injury, Jeremy said, his brain doesn’t trigger the need to be hungry even though Jonathan’s body needs the nutrients. Slowly but surely Jonathan is eating and gaining his charm and humor back, but the parents know it is a slow process ahead.

Jonathan had to stay at FMC for over a week and just got home Monday. He was greeted by a homecoming of sorts, with friends and family there to show their love and support as he continues to recover.

Jessica and Jeremy made a Facebook page called “Prayers for Jon” to keep family and friends in the loop about Jonathan’s recovery. It was initially expected to be a small group, intended to keep information streamlined and directly from Jessica and Jeremy so rumors wouldn't spread, but the group has ballooned to nearly 600 members and daily posts from people across the Flagstaff football community showing support and sending best wishes to the family.

“I did not expect it to be as big as it is,” Jeremy said, with his wife Jessica adding that it also gave them a chance not to be constantly on their phones responding to messages or calls. “It’s amazing, but it was originally just to make sure everyone who wanted to know was filled in on what’s going on with him.”

Jessica and Jeremy were shocked by the countless calls, text and Facebook messages from the community showing their support.

“At the time it seemed like time was going so slow,” Jessica said of the first few days in the hospital. “But at the same time, as we were just staring at him, watching him breathe and watching every little moment and movement.”

Even away from the group on Facebook, the Coconino football team has shown their own support of Jonathan.

Senior running back Zach Bennett wrote “For Johnny” on his pads before last week’s game, Manuel Cardoza brought Jonathan’s jersey out to the field pregame and the team will wear No. 6 patches on their helmets the rest of the season.

Even since he’s been home, Jonathan’s friends have come over to check in on their brother -- a welcomed site for his parents who see things slowly turning back to normal.

“Whenever his friends come around he perks up and you can hear them in his room laughing,” Jeremy said.

The laughing wasn’t something Jessica expected this soon, even more to the parents’ hopes.

“It’s a noise we didn’t expect to hear for a long time,” Jessica said. “In the beginning part of this I honestly thought we would have been in the hospital at least a month minimum because of how severe he was.”

Jessica was amazed that Bubba Ganter, an assistant coach on the Panthers football team, made the page, but admitted she hasn’t looked at it despite being exceedingly grateful.

“I can’t give enough thank you's to every single person who has helped out,” Jessica said.

The Coconino team and coaching staff got a welcomed visit Wednesday at practice.

Jonathan and his family went to Cromer Stadium as Jonathan got his first chance to watch his team since the accident. Jonathan was smiling and joking with teammates and coaches, and even participated in the team’s post practice jumping jacks routine.

“It just warms my heart,” Panthers head coach Mike Lapsley said after seeing Jonathan at practice. “Our team motto is ‘Family’ and he is a part of that. Obviously his family coming out means a lot to us and our program, and I could see the smiles on our players faces and knowing that he’s getting better everyday lends itself to all the happiness out here for our team.”