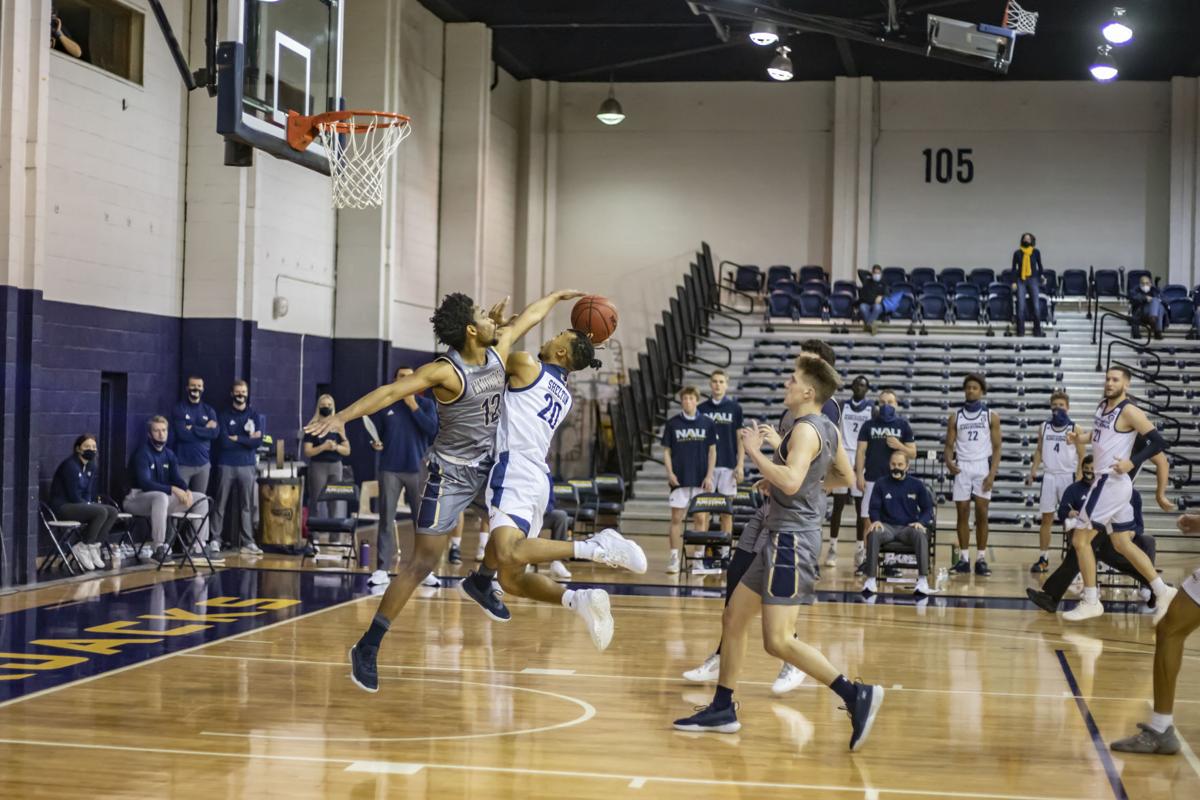 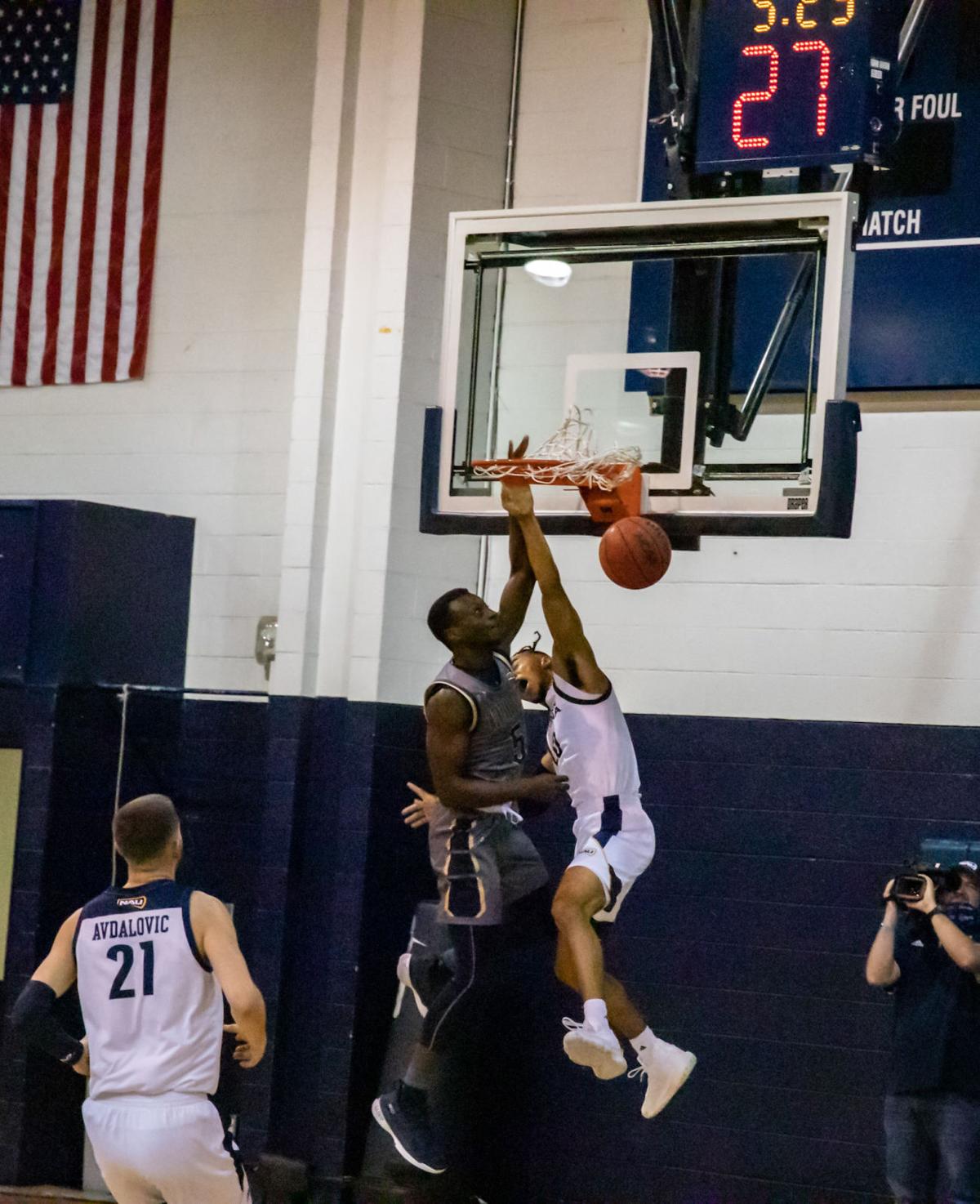 Just when it looked like things were rolling in the right direction for the Northern Arizona men’s basketball team, self-inflicted errors halted the momentum.

Down by one possession with under two minutes to go in Saturday's game against Montana State at home, Lumberjacks forward Isaiah Lewis missed the front end of a 1-and-1 chance at the free-throw line. No big deal, just a missed free throw and the Lumberjacks had plenty of time left in a close game.

Then after getting a stop on defense off a Nik Mains block, Lewis caught a swing pass in the corner from Mains and drove baseline. He had little resistance from the Bobcats defense, but he double pumped and missed a point-blank layup at the rim as the ball rolled around the iron and out.

“Our room for error is so thin right now we need to make those shots to put some game pressure on guys,” Lumberjacks head coach Shane Burcar said following the game.

From there, holding on to a one-point lead, Bobcats guard Amin Adamu hit a jumper to make it a three-point game. Lumberjacks guard Cameron Shelton was called for an offensive foul on a drive to the hoop -- which then led to another bucket for Adamu with 19 seconds left.

Shelton hit a layup but Adamu sank a pair of free throws to ice the game and seal the 58-53 win over the Lumberjacks in the Rolle Activity Center.

The Bobcats won their seventh straight game and are in sole possession of first place in the Big Sky Conference at 9-3 overall and 6-0 in the Big Sky as the lone unbeaten Big Sky team left standing.

Northern Arizona meanwhile is trending in the opposite direction two games after a surprise comeback win at Montana last week.

Northern Arizona's record drops to 4-11 overall and 3-6 in conference play. But most notably, the Lumberjacks haven't won a game in Flagstaff, sitting at 0-6 at home in the Rolle Activity Center. The last time the team started as bad or worse was the five-win 2017-18 season.

That season the Lumberjacks lost to Embry-Riddle at home, later beat San Diego Christian -- two non-Division I teams -- and it took until Feb. 22, 2018, for the Lumberjacks to get a win over a D-I team at home when they beat Sacramento State. The win over Sac State was the only home win against a D-I team that season for Northern Arizona, which went 2-10 at home in 2017-18.

The Lumberjacks have four more chances to get a home win this year, but even if the they win all four their home record would be under .500 at 4-6. With games against Northern Colorado, Southern Utah and Portland State, getting the elusive home win is looking more and more difficult.

So, is there a way to explain the home struggles? When asked during the post-game press conference, Burcar wasn’t so sure how to answer that question.

Northern Arizona has played five home games against teams with winning records as of time of publication: UC Riverside (6-4), Idaho State (8-6, 5-2 Big Sky) and Montana State. The fourth team the Lumberjacks have played at home -- Eastern Washington -- is 4-6 overall and 3-2 in the Big Sky but is widely regarded as the best team in the Big Sky.

In terms of margin of defeat, the six home losses are split down the middle. Three have been by double digits -- UC Riverside, Eastern Washington and Thursday’s Montana State game -- while three have been single-digit losses -- both Idaho State games and Saturday’s Montana State loss. Two of the losses included a key injury, when Luke Avdalovic missed all but a minute of the first Idaho State game and then the entire second game.

With no fans in the arena, the 7,000-foot advantage that has usually been kind to the Lumberjacks just hasn’t been there. It really is unclear what the funk at home has been as the Lumberjacks continue to struggle to finish games.

It wasn’t all that bad Saturday.

Shelton became the 30th player to join the 1,000-career points club for the men’s program after scoring a game-high 22 against Montana State. If Shelton continues his scoring pace, and doesn’t suffer a serious injury or transfers out, he would pass Cameron Jones as Northern Arizona’s all-team leading scorer.

“I got here as an assistant coach, his first summer was my first summer,” Burcar said. “He’s been a joy to coach and I know his competitive level is through the roof. … Now the next challenge. He is having a great scoring season, now are you going to be a great guard on a great team or a great scoring guard on a bad team? That’s my challenge to him. … He’s doing everything he can to be a great guard on a winning team.”

In addition to the 22 points, Shelton had five rebounds, four assists -- likely at least 10 assist chances per Burcar -- and seven turnovers, a career high in that category.

Burcar, as he normally does, summed up the offensive struggles concisely: “Other guys have to make shots,” he said.

For the third time this season, and the second straight game, Shelton was the only Lumberjack to hit double-digit scoring. Take out his 9-of-21 shooting day and the other seven Lumberjacks who attempted a shot went just 12 of 29 from the field.

“Other guys have to step up so (teams) guard us differently,” Burcar said.

NAZ Elite is spending time in Scottsdale for a team retreat, running in warm weather, getting in some bonding and kicking off the year with it…