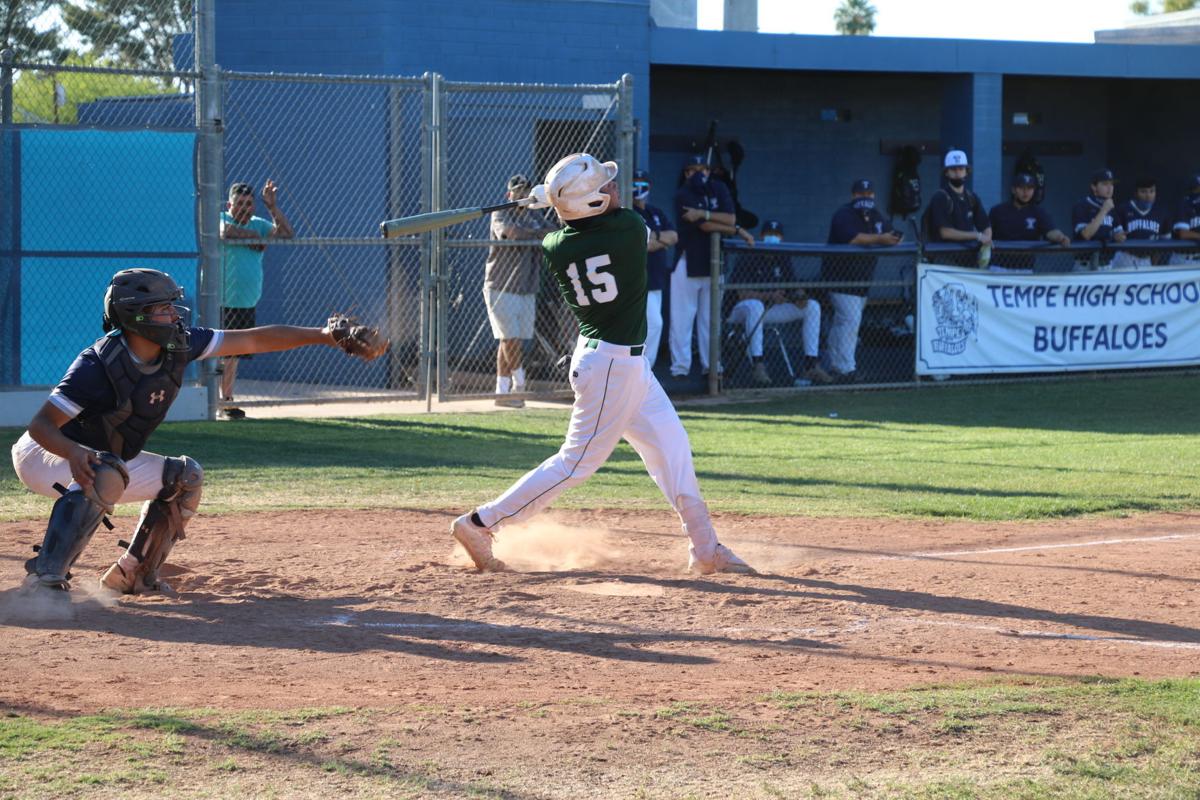 Senior Sylas Clerry works during an at-bat during a road game. He had a double and two RBIs for the Flagstaff Eagles in their 15-3 victory over Tempe on Thursday in the Valley. 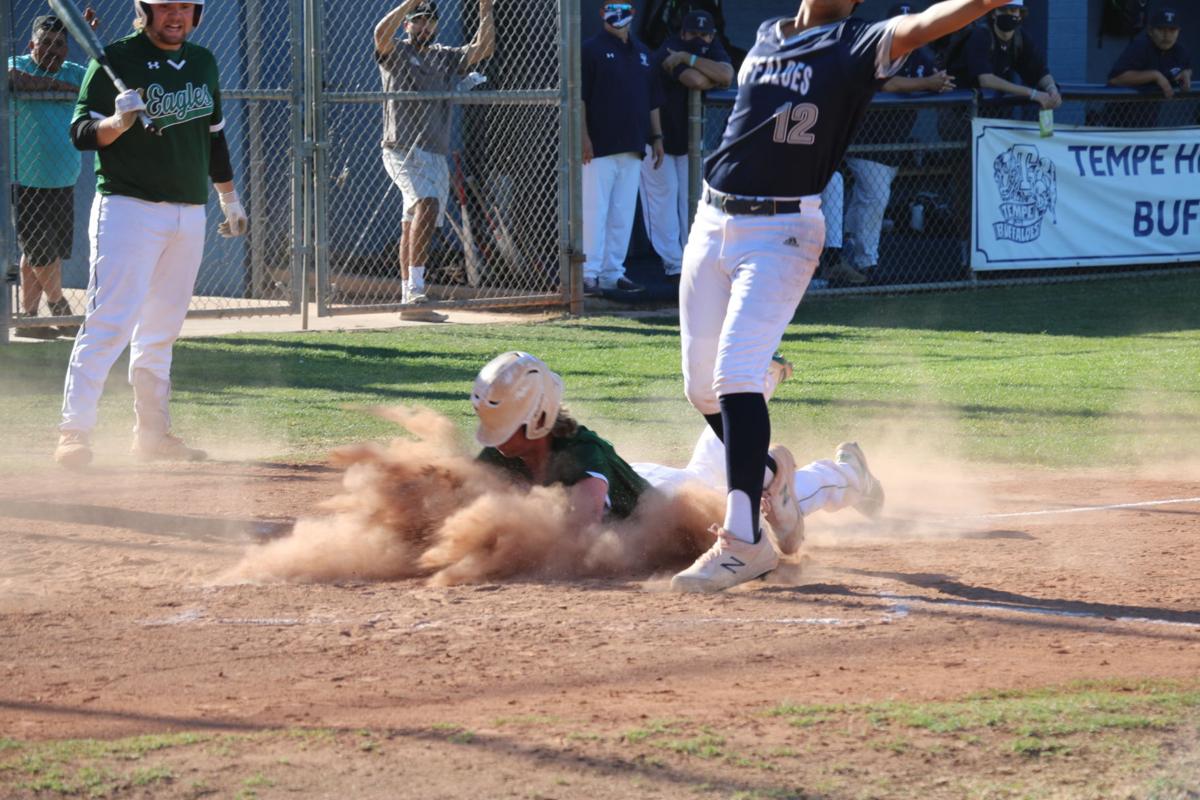 Flagstaff Eagles senior Gabe Faust slides home to score during a game against Tempe in the Valley on Thursday. 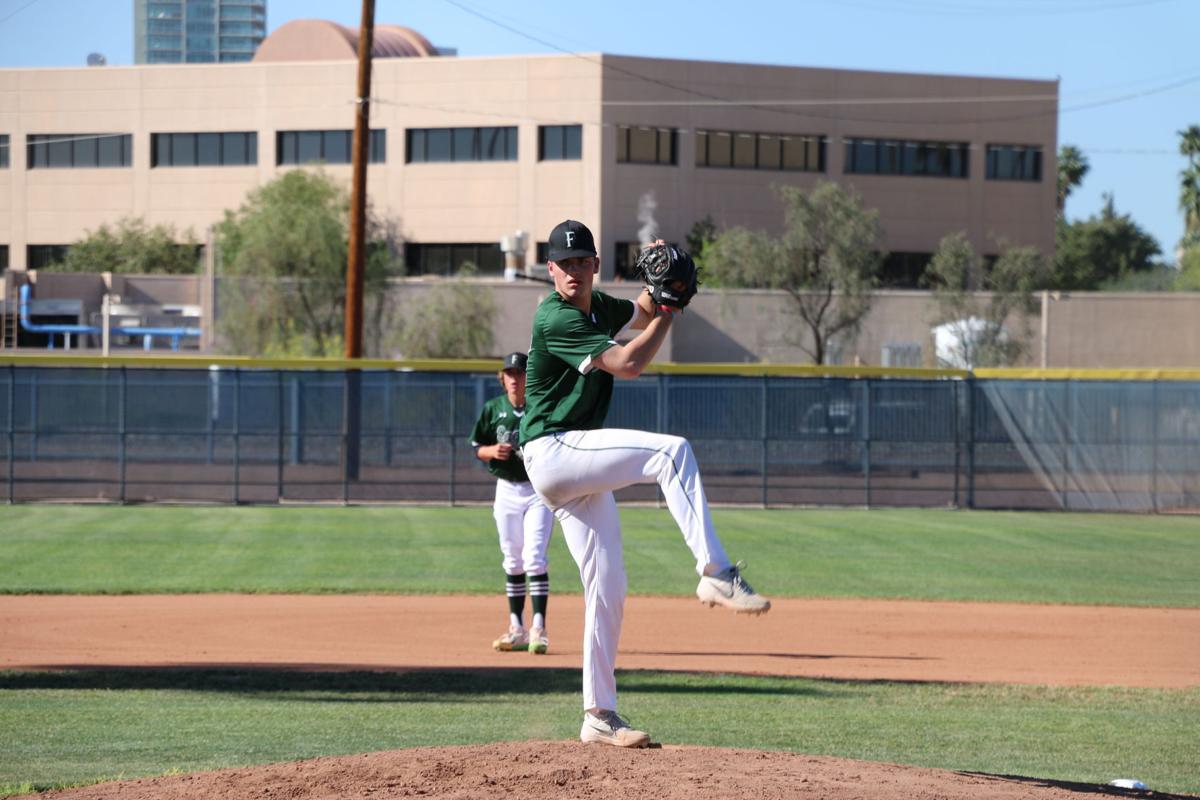 Flagstaff Eagles senior starting pitcher Justin Hanson winds up during a game Thursday on the road against Tempe.

TEMPE -- Flagstaff Eagles baseball rode a hot fourth inning and solid pitching from senior Justin Hanson to a 15-3 road victory over the Tempe Buffaloes on Thursday, pushing the Eagles to three consecutive wins.

Tied 1-1 after three innings, the No. 6 4A Conference Eagles put up six runs in the fourth to blow open the lead from the No. 35 Buffaloes (4-12), who had hung around early. While struggling to make solid contact the first time through the order, Flagstaff’s bats got hot the second time through and they batted around the order.

“Sometimes you’ve got to just wait until deeper in the game" Eagles senior Sam Schmitz said. "You start swinging a little bit better, you’ve seen the pitcher a few times and stuff starts to come together. You go 0 for one and you’re just hungry for the next one, ready to go get that hit, and everyone felt that way,”

The game did not go Flagstaff’s way early, though.

Hanson, despite pitching five innings and giving up just one run overall, struggled to start the game. Tempe took a 1-0 lead after the first inning, due in part to a few wild pitches and less velocity and control from the senior.

Meanwhile, Flagstaff’s batters struggled with slow pitching and could not get good contact on the ball. The Eagles scraped together a run in the third, as senior Gabe Faust scored on a wild pitch to tie the game, but were inconsistent.

That pattern changed in the fourth as Flagstaff started to dominate.

“You’ve got to give credit to the pitcher, because he kept us off-balance the first few innings. Then they made a few mistakes later on and we took advantage of that,” Eagles manager Mike DoBosh said.

And as Flagstaff’s batting got better, so did its pitching. After giving up a run in the first inning, Hanson’s pitches became more precise. He did not give up a hit after the first inning and struck out 10 batters total through five.

“I struggled for the first two innings, threw about 36 pitches in the first inning, and I just didn’t come ready. And as the game wore on and I warmed up, I got better,” Hanson said. “My control got a lot better, fastball had better velocity, the curve came along and started breaking to make the batters start guessing.”

And the Eagles batters only got better. They ended the game with 16 base hits and tacked on eight more runs in the final three innings. DoBosh was impressed with his team’s discipline at the plate.

Despite drawing just one walk through three innings, Flagstaff ended with eight walks and was more stringent with its swings.

“That’s definitely something we preach. Any way we can get a guy on and get the offense going, we’re trying to take advantage of that,” DoBosh said.

Junior Bodie Maier pitched the sixth and seventh innings in relief. The Buffaloes scored two runs in the bottom of the seventh but never threatened to make it a close game as Flagstaff ran away with the win.

The Eagles pushed their record to 15-1 overall on the season after winning the non-region ballgame. Flagstaff will face 3A No. 15 Winslow (12-5) on Saturday, the first of three games remaining in the regular season.

Schmitz believes if Flagstaff can continue the way it is playing of late, the Eagles will be ready to make a run in the final games and playoffs moving forward.

“We’re 15-1 for a reason; it’s not just getting lucky at this point. We’re grinding hard at practice and the results are there, so nothing needs to change right now if we keep up what we’ve been doing," he said.

The AIA announced Thursday the bracket for the 2021 Division II state championship tournament, and both Coconino and Flagstaff will play in the first round on May 3.

No. 3 Coconino went undefeated at 12-0 for the regular season and was crowned Section IV champion with an 11-0 league record.

The Panthers will host No. 14 Canyon del Oro (6-5) in the first round. The Dorado finished second in Section I and beat Amphitheatre, 5-0, on April 28 to end the season. The Panthers and Dorado have not met in 2021.

The winner will take on the victor of the No. 11 ALA-Gilbert North and No. 6 Valley Christian on May 5.

No. 9-seeded Flagstaff (9-3) will visit No. 8 Deer Valley (9-2), which won the Section V title and has won two straight matches heading into the playoffs. Flagstaff beat the Skyhawks, 3-2, at home in their last meeting on April 21. The winner will face the winner of No. 16 Rancho Solano Prep and No. 1 Salpointe Catholic.

Senior Sylas Clerry works during an at-bat during a road game. He had a double and two RBIs for the Flagstaff Eagles in their 15-3 victory over Tempe on Thursday in the Valley.

Flagstaff Eagles senior Gabe Faust slides home to score during a game against Tempe in the Valley on Thursday.

Flagstaff Eagles senior starting pitcher Justin Hanson winds up during a game Thursday on the road against Tempe.