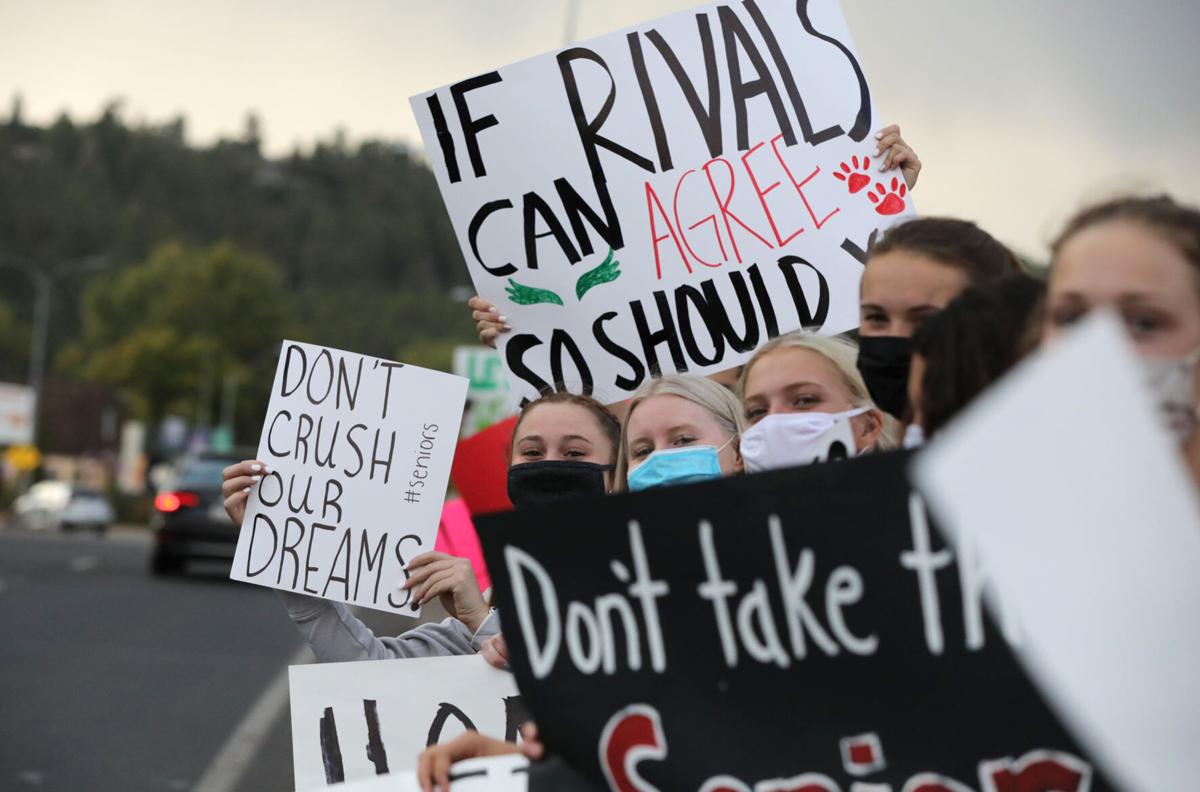 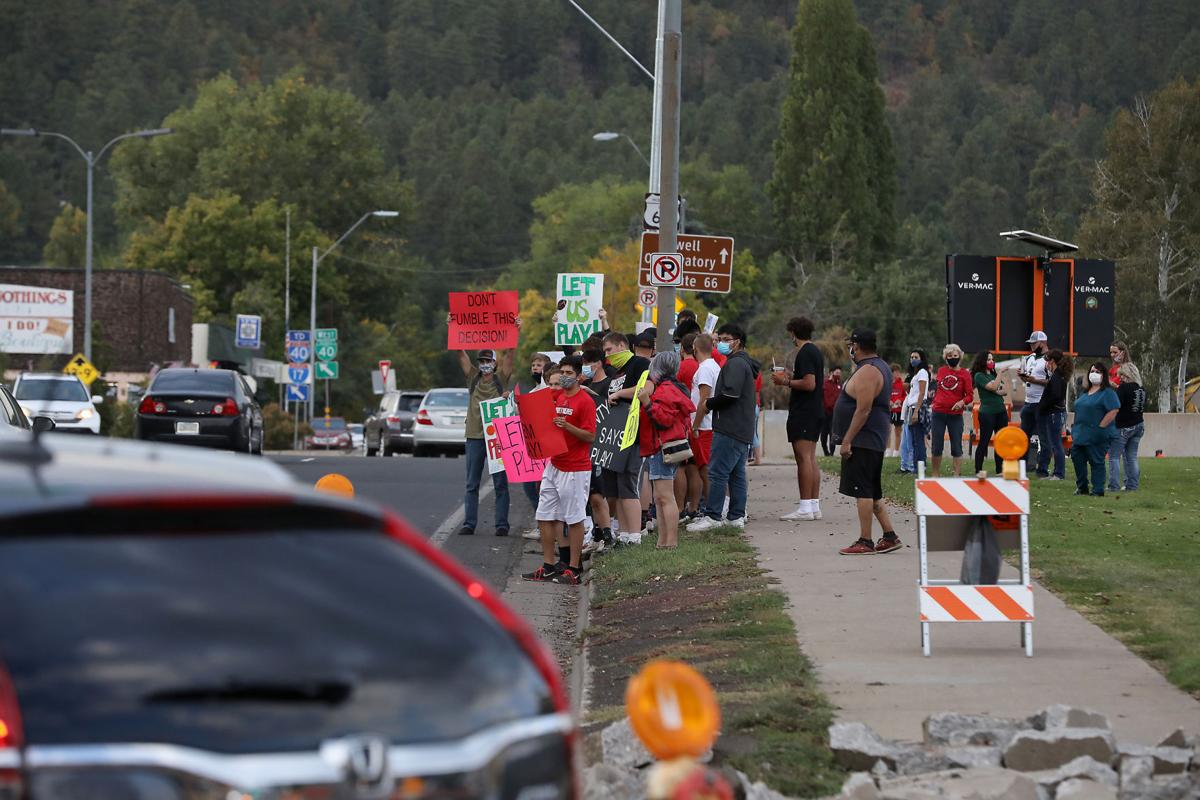 It seemed like high school sports weren't going to be decided on at all at Flagstaff Unified School District's Tuesday board meeting — up until the very last second.

Think of it like a buzzer beater of sorts.

FUSD decided at about 12:10 a.m. Wednesday morning, following an over 6 1/2-hour meeting, that all non-contact sports can resume practice and competition while contact sports — football and volleyball — may restart practices and that competitions will be allowed to start as scheduled next week.

FUSD also passed a detailed plan that states, whenever competitions are resumed for football and volleyball, 10% capacity will be allowed for fans to attend.

The board will meet Tuesday to address the rest of the agenda items that were not able to be completed.

Everything seemed like sports would stay in limbo as each hour ticked by, but the motion to allow the resumption passed with one board member opposed. It is still unclear whether schools can restart immediately, as the decision was made so late into the night.

The decision comes after a whirlwind few days due to a rise in COVID-19 cases seen Friday that prompted FUSD and Superintendent Mike Penca to halt all sports. As of Friday's weekly schools report, FUSD zip codes reported 114.5 cases per 100,000 residents, putting the district in the substantial community spread category.

Penca said during the Tuesday meeting that while Coconino County Health and Human Services provides data, the ultimate decisions are up to FUSD and its governing board, adding that he owns the decision to put sports on hold.

The county confirmed Tuesday that it did not advise FUSD to halt sports; it only provided the data that was used in the decision.

“The county did not make a recommendation or give direction,” an email from a Coconino County spokesperson read. “The county provides COVID data specific to schools each week which can be found here. The schools and districts use this information to make decisions.”

Arizona Interscholastic Association Executive Director David Hines said to KAFF News Tuesday morning, and to Penca during a meeting the two had that day, that the AIA guidelines don’t inherently recommend schools to halt sports based on new data.

According to a section in the AIA’s guidelines, however, the decision to reassess the safety of holding sports is up to individual school districts and health officials. If community spread falls into the substantial community spread category, then districts can stop or postpone sports.

“When there are written guidelines and directions to follow those guidelines, I don’t feel like we can pick and choose the parts we want to follow,” Penca said during the board meeting. “ … I see some risk that comes from that when we come up with our own guidelines or pick parts we don’t like.”

One board member said she was “shocked” to see the news of FUSD canceling sports in last Saturday’s edition of the Arizona Daily Sun. Penca apologized to her for the surprise, noting he attempted to make sure all board members were aware of his decision.

A board member was skeptical about restarting high school sports competition at all, but they were ultimately out-voted while the motion was brought up in the late hours by Penca.

Another board member also stated near the end of the night that "the AIA isn't looking out for Flagstaff," around the same time the vote on sports went through.

The Flagstaff volleyball team was set to open the season on the road Tuesday, while both Flagstaff and Coconino were slated for home openers Wednesday — and it is not clear if the home matches will be rescheduled.

Next week, Flagstaff hosts Prescott on Monday and Coconino hosts Bradshaw Mountain the same day. The Panthers are also on the road Thursday in Cottonwood at Mingus Union.

Both Flagstaff and Coconino football are scheduled to open the season Friday, Oct. 2.

Penca said FUSD and the schools would make an effort to reschedule missed competitions as they can.

In a joint letter from both the Flagstaff and Coconino high school booster clubs that was sent to FUSD to be read in the public comments section of the meeting — but ultimately wasn't due to time constraints — parents and those who support local high school sports asked the district to reverse its decision to halt sports and resume as scheduled.

The booster’s letter claimed that there was a lack of clarity from FUSD because the decision was made late Friday afternoon in response to a spike in cases.

“There seems to be no clarity or direction from the Board or the Superintendent,” the booster’s letter read. “As parents, our jobs are to be advocates for our children. We have supported their efforts to play the sports they love. It is a much easier task to do when we are informed parties in the decision-making process.”

The group asked FUSD to include Flagstaff and Coconino’s athletic directors — Jeannine Brandel and Eric Freas, respectively — in the decision-making process regarding halting or resuming sports. The boosters added they would like coaches of relevant sports and even parent representatives involved.

“We are requesting additionally, that the decision making process be transparent and public,” the statement read.

When requested Friday afternoon by the Arizona Daily Sun for an interview asking for more information on the stoppage of sports, an FUSD spokesperson declined, citing no further comment at the time.

Similar sentiments were shared at a Monday protest, where athletes from both Coconino and Flagstaff gathered at Flagstaff City Hall to protest FUSD’s decision to put a hold on sports.

Parents supported the athletes as well during the “Let Them Play” protest, as between 50 and 100 supporters were there to ask for the district to reverse its decision and allow high school sports to return as scheduled.

Other public comments read during the meeting voiced support for athletics, some from athletes themselves and others from parents. Some argued they are concerned of the mental health of athletes, others about their school work suffering and some just simply wanted to play because it was their senior seasons or had chances to get looks from colleges.

On Wednesday afternoon following the vote, Northland Prep officials said all sports except volleyball will resume starting Saturday. The Spartans girls soccer team travels to face Snowflake and the cross country team has a race in Prescott.

Officials said volleyball is on hold for now.

Flagstaff Charter School zip codes are currently at 122.5 cases per 100,00 residents according to county health data.