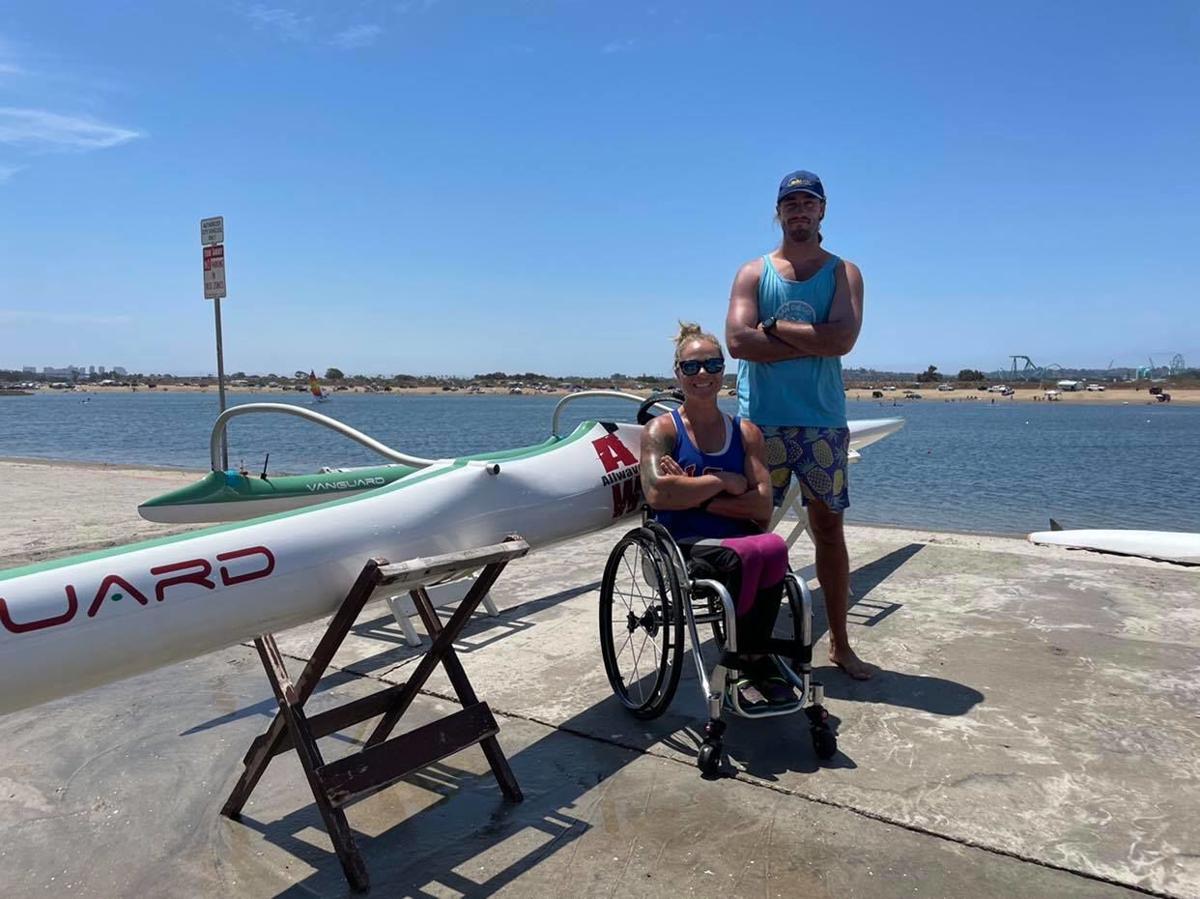 Kaitlyn Verfuerth, a 10-year Flagstaff resident, former Flagstaff Eagles girls tennis coach and three-time Paralympian in wheelchair tennis, is set to trade her racquet for a paddle in August, as she will compete in the paracanoe event at the 2020 Tokyo Paralympic Games from Aug. 25 to Sept. 5.

A longtime athlete, she competed in Athens in 2004, Beijing in 2008 and Rio in 2016, which she figured would be her last appearance at the Paralympics. Verfuerth bowed out in the quarterfinals in the doubles bracket in 2016 and had no expectations that she might be back representing the United States five years later.

At the opening ceremony in Rio, she was seated next to the paracanoeing coach at the time, who invited her to simply try out the sport of paddling for something fun to keep up her physical health. Next thing she knew, Verfuerth found a love for paddling in a kayak, tried out canoeing and fell in love. Now, in just over a month, she will take on the 200-meter course against the world’s top paracanoers.

“I didn’t really plan on doing another sport. I was retired from tennis after Rio and I wanted to try some new things. I wasn’t anticipating competing at this level, or going to the Paralympics in this sport, but it’s all just sort of happened one thing after another and here I am,” Verfuerth said.

Since qualifying for the Games, Verfuerth has trained vigorously in Gilbert -- she moved to the Valley from Flagstaff recently to take up a new job at Ability360 -- and takes bi-weekly trips to train with coach Doug Ellery in San Diego.

A former member of Team Canada, Ellery has worked with several North American paddlers of all talent levels, but he said Verfuerth stands out with her immense effort, all while working full time and pursuing her master’s degree in recreational therapy.

“I’ve worked with a lot of different athletes -- para-athletes and non-para-athletes -- and she’s definitely the best. I give her the workout, and she does it with no excuses and gets it. She’s just working so crazy hard to achieve her goal,” Ellery said.

He has seen drastic improvement in the weeks they have worked together. He cited a recent “breakthrough practice” the two had in a recent session that resulted in significant speed increases.

“She’s moved everything forward," Ellery said. "So instead of pulling it behind her, it’s now way out in front of her -- which means she’s able to increase the stroke rate and go faster.”

Even while working to become her best, Verfuerth lacks the years of experience in the boat, compared to the decades of practice and competitions put in by her competitors.

What she lacks in skills developed over years of training, however, is made up in her mental ability. Her career of high-level play in tennis, including a fourth-place finish in Beijing in 2008, gives her an edge. In her fourth Paralympics, the stakes will feel almost second-nature.

“Tennis has helped me mentally. I’ve been on that big stage before, I know what it’s like to play tennis at that high level, so going into this Games I know mentally where I need to be. I know what’s at stake and what the environment’s going to be like,” Verfuerth said.

And while strategy differs from tennis, where opponents must react to each other’s play, she has knowledge of how individual competition works.

“In tennis you have a different opponent every time, and you try to figure out those weaknesses and pick on those, whereas in this I know who my competition is. It’s not so cut-and-dry because I can’t just focus on one person’s weaknesses. But what I can do is anticipate where they’re going to be and where I need to be to beat them at certain points,” she said.

Before she takes her spot in a boat at the upcoming games, Verfuerth is already a bit of a niche star in the paracanoeing community. Competitors are intrigued by her positivity, inspired to receive a piece of her knowledge that United States teammates from various sports have lauded in their stories about her.

Ellery said before he even had trained Verfuerth, he was hearing questions about her at a recent Paralympic qualifying event.

“When I was in Hungary a few months ago, all these athletes from different countries came up to me and were like, ‘Is Kaitlyn here?’ and I had to say I hadn’t even met her yet, but you could see the effect she has on people because she’s so happy in her training and people are excited to see her,” Ellery said.

With Tokyo 2020 quickly approaching, Verfuerth is on the water as much as possible, supplemented by weight workouts when she has time in her busy schedule. But, even with all her preparation, she is not putting pressure on herself.

As somewhat of a novice compared to her competition, Verfuerth’s skill is relatively unknown by those she will race against, even as they are eager to meet her. She remembers a woman finishing the course in about 54 seconds to win a race a few months prior, and has recently begun finishing in less than a minute in her own practice sessions. With the rate of improvement she has seen, there is a chance she could surprise the field if she competes at her best in Tokyo, capturing a top-three finish that has barely eluded her for years of competition.

“I have nothing to lose, and my coach and I don’t know what I’m even capable of, so it’s kind of exciting to see what’s going to happen. Maybe I have a chance I can medal at this sport,” Verfuerth said.

Jill Biden to Travel to Japan for 2021 Olympic Summer Games

Jill Biden to Travel to Japan for 2021 Olympic Summer Games. First Lady Jill Biden will be traveling to Tokyo, Japan, for the opening ceremony…