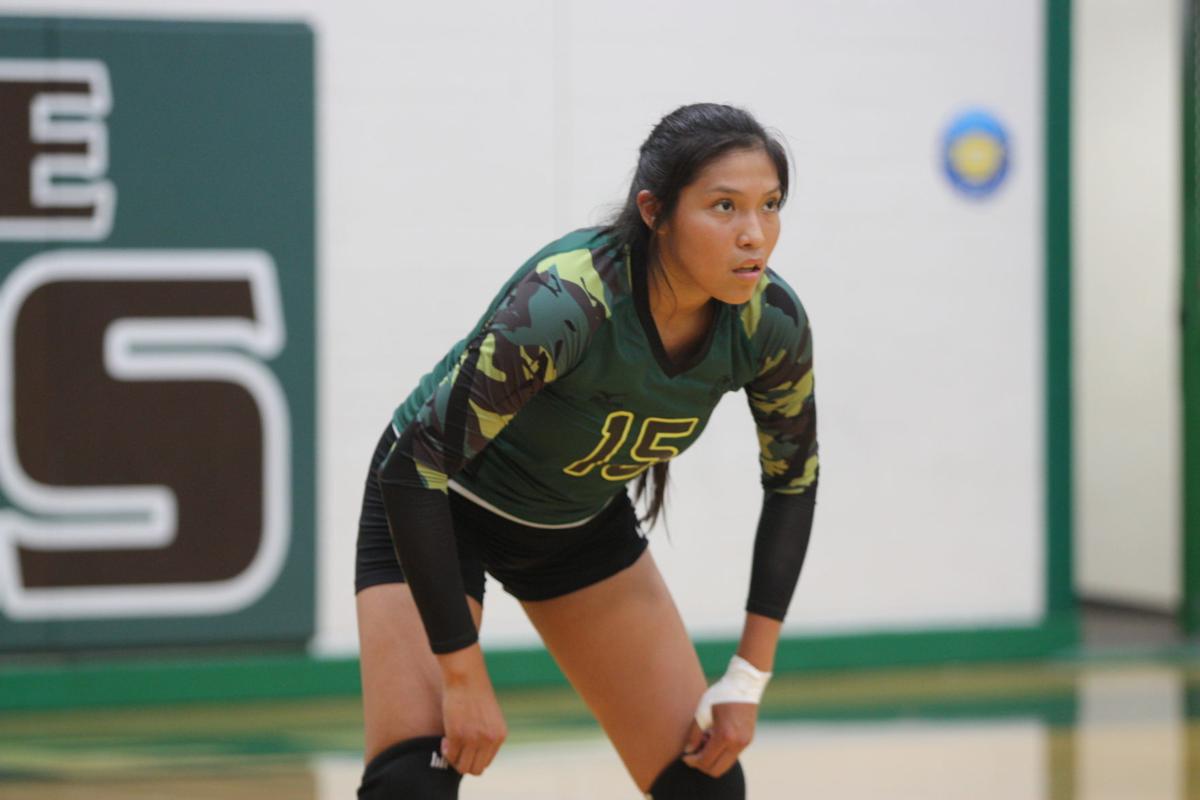 "With our home crowd on our home court, my adrenaline was going. The crowd was just lit up and it was so fun," Flagstaff Eagles senior outside hitter Gracelyn Nez said after Flagstaff volleyball's 3-1 victory over Deer Valley on Tuesday at Flagstaff High School. 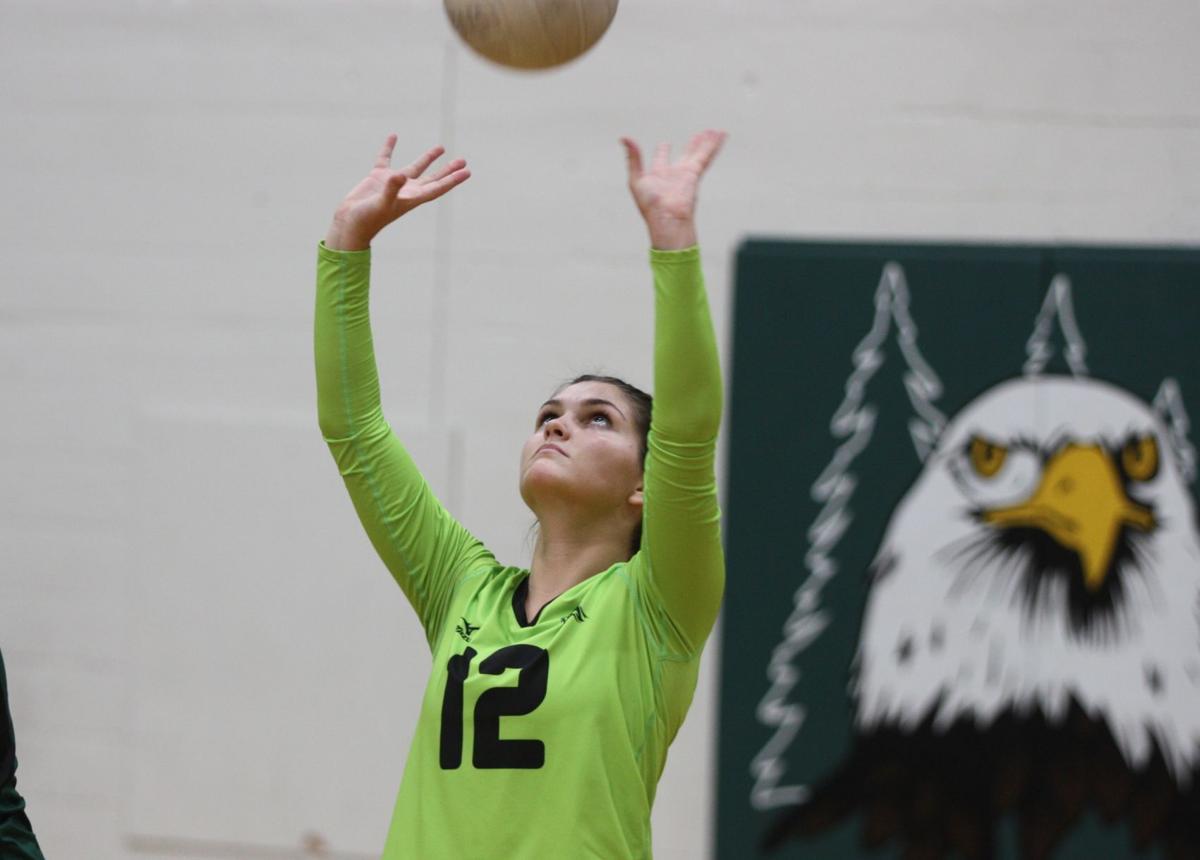 The Flagstaff Eagles volleyball team rolled to a 3-1 win over the Deer Valley Skyhawks Tuesday at Flagstaff High School to begin the 2021 season with a victory.

As a No. 6 seed in last year’s state tournament quarterfinal, the Eagles upset No. 3 Deer Valley to advance to the semifinals. They knew the Skyhawks would provide an immediate test, as the Eagles fancy themselves a championship contender this year.

“I think this is a big win for us. We have a lot of really good teams we’re playing early like Greenway and Notre Dame and some others, and this really set the tone for the rest of the season,” Eagles senior Bridget Bond said.

Finally at the end of a long preseason, senior Gracelyn Nez registered a kill for the first point of the match, and the Eagles never looked back. Flagstaff celebrated as the large crowd cheered at a decibel level Flagstaff had not heard in some time.

“It felt great. With our home crowd on our home court, my adrenaline was going. The crowd was just lit up and it was so fun,” Nez said.

The Eagles traded points with the Skyhawks in the first set up until 14-14. Then, Flagstaff rattled off three straight points and never gave up the lead, winning 25-17.

The second game was more of the same early. Bond served for six straight points and junior teammate Danica Wilson won four more to put the Eagles up 10-2.

“I think the momentum started going our way then. Once you start getting those aces, those points, you get the team going, and that’s just so fun,” Bond said.

Deer Valley could not catch up, but kept creeping back into the set toward the end. The Skyhawks trailed just 22-20 after being down as much as nine points in the game. But, the Eagles went on a small run and a kill by junior Mckell Giese gave the Eagles a 25-20 win and a 2-0 lead.

The momentum changed in the match after the second game. While the Eagles looked like they would come away with a sweep, Deer Valley stormed to a 6-1 lead in the third. Flagstaff fought back to keep it close, but its defense that had dominated to that point was unable to keep the talented Skyhawks hitters from finding the floor. Deer Valley took the third game 25-18 and tightened the match score to 2-1.

Eagles head coach Beth Haglin encouraged her team to stay disciplined in the huddle, getting back to what they had done earlier to take the lead.

“I told them we had let down and that everybody had to step up their game and continue to volley, hop and continue to be aggressive on defense, and we needed to be prepared for them to hit at us. It was basically just, ‘be ready,’ because we’re on our heels so they just started playing aggressive defense,” Haglin said. “We hit a lull in the third set. A lot of the kids that had been out there the whole time were passing badly, and I feel like they stepped it up in the fourth set and played good ball, and they did what they were supposed to do.”

Her speech worked and the Eagles ran out to a 13-5 lead in the fourth stanza. They closed it out comfortably, winning 25-17 and securing the 3-1 match win.

Flagstaff’s War Memorial Gymnasium, for the first time since 2019, was open for spectators beyond the basically immediate family and the junior varsity players. The student section was standing-room-only by the end of the JV match, and had merged into the upper bleachers, all loud and cheering with enthusiasm they had not been allowed to express since two seasons ago.

Along with solid play from the senior leaders, the new-found energy in the gym gave the Eagles momentum that lasted throughout the match.

The Eagles will attempt to ride the momentum of this win into Thursday, when they face Greenway in Phoenix. The Demons -- quarterfinalists last year and back-to-back 4A Conference champions before that -- fell 3-0 to defending runner-up Notre Dame Prep Tuesday.

Flagstaff, Nez said, is still building toward its final form in 2021. But a win over a perennial playoff team bodes well for the Eagles early in the campaign.

“We are going to find out how good we are, but right now is just a start. We’ve got to keep going and moving forward and up,” she said.

Why are the Cowboys favored to win the divison?

Who's more likely to make the CFB Playoffs: Clemson or Ohio State?

Who's more likely to make the CFB Playoffs: Clemson or Ohio State?

Playing Volleyball in Front of an Erupting Volcano? These Friends Are Doing the Impossible

The incredible footage shows a group of professional volleyball players having a game in front of an active volcano. Buzz60’s Maria Mercedes G…

"With our home crowd on our home court, my adrenaline was going. The crowd was just lit up and it was so fun," Flagstaff Eagles senior outside hitter Gracelyn Nez said after Flagstaff volleyball's 3-1 victory over Deer Valley on Tuesday at Flagstaff High School.