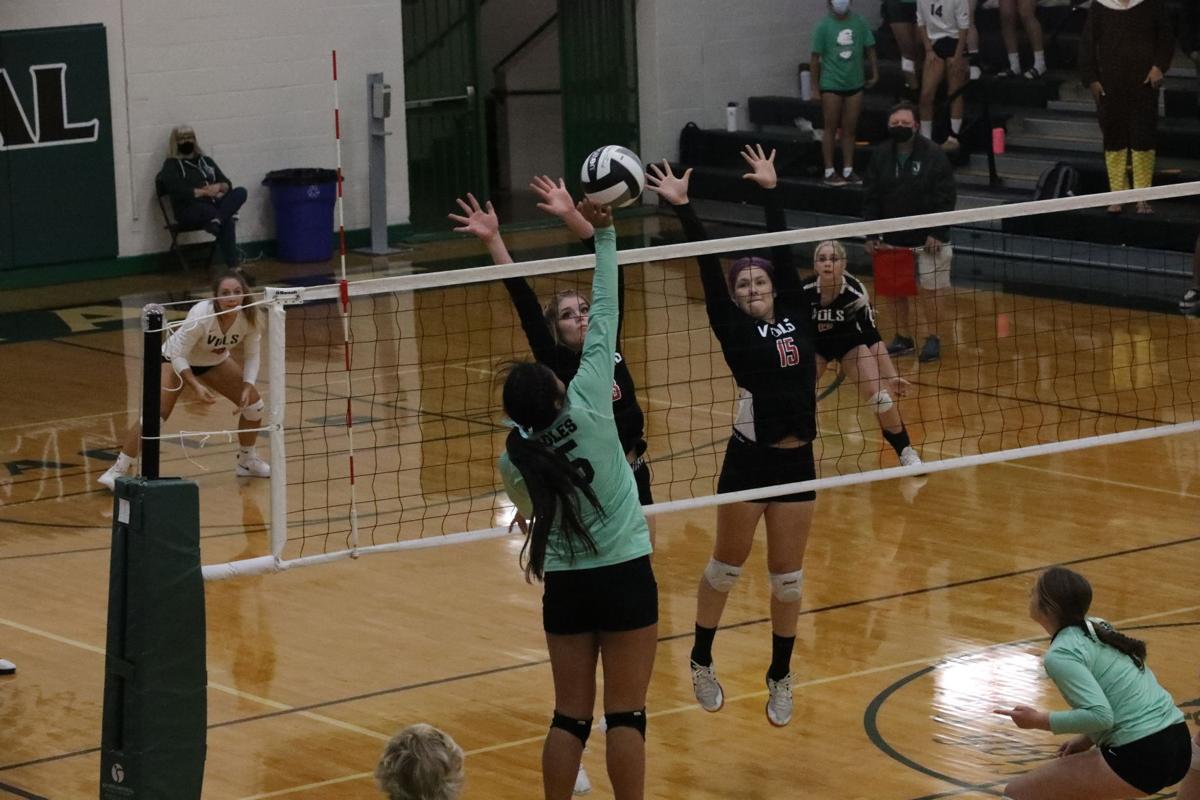 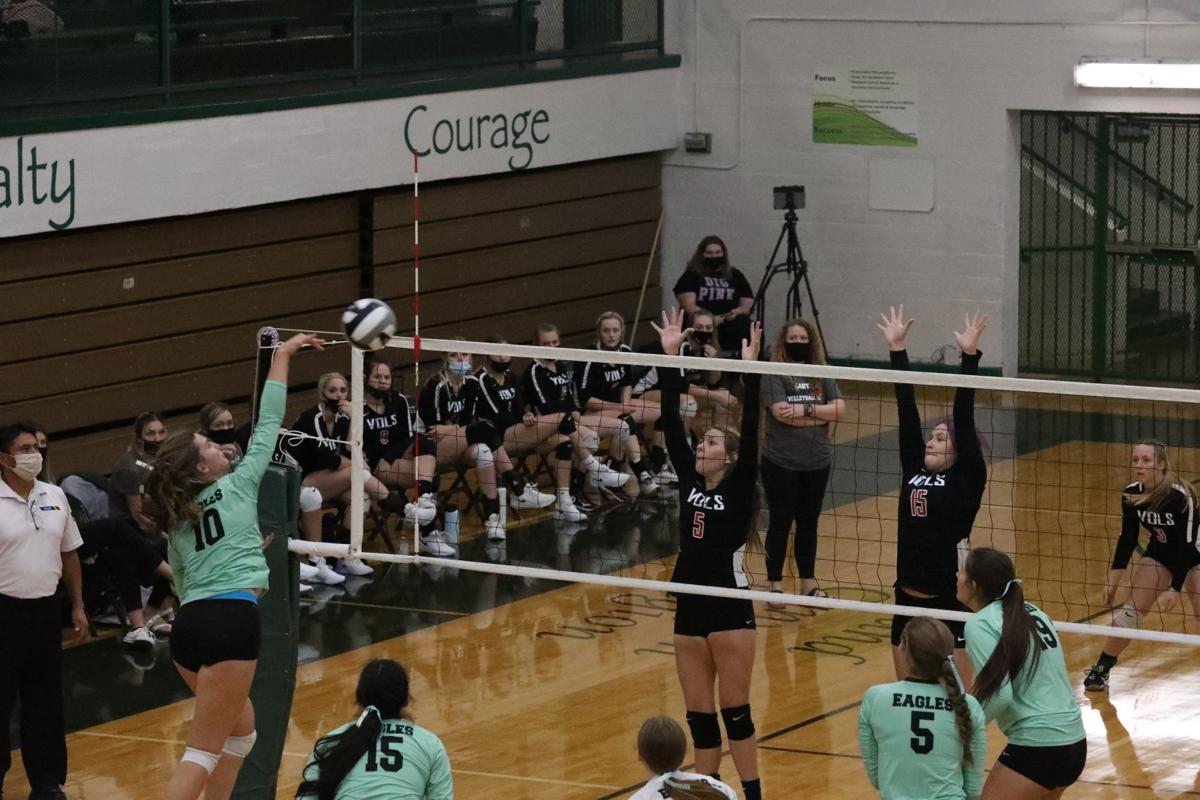 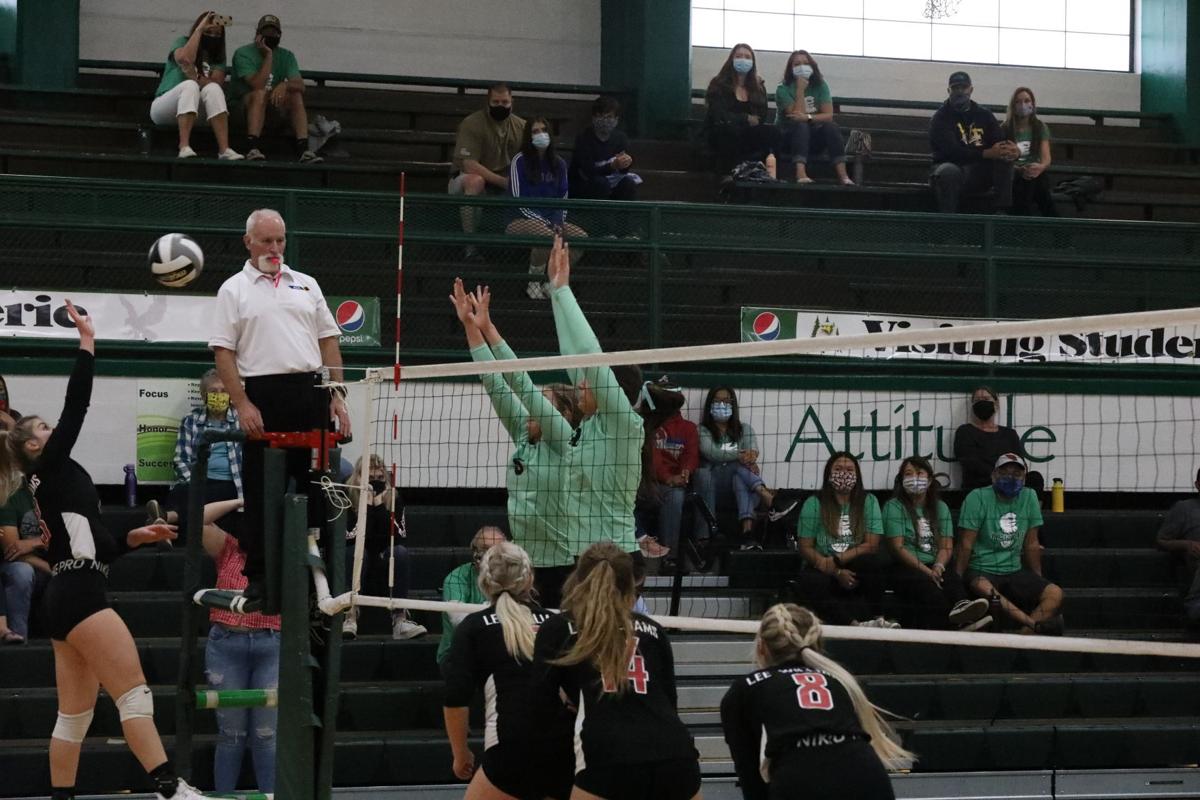 A pair of Flagstaff players attempt to block an attack by Lee Williams Saturday morning at the War Memorial Gymnasium. 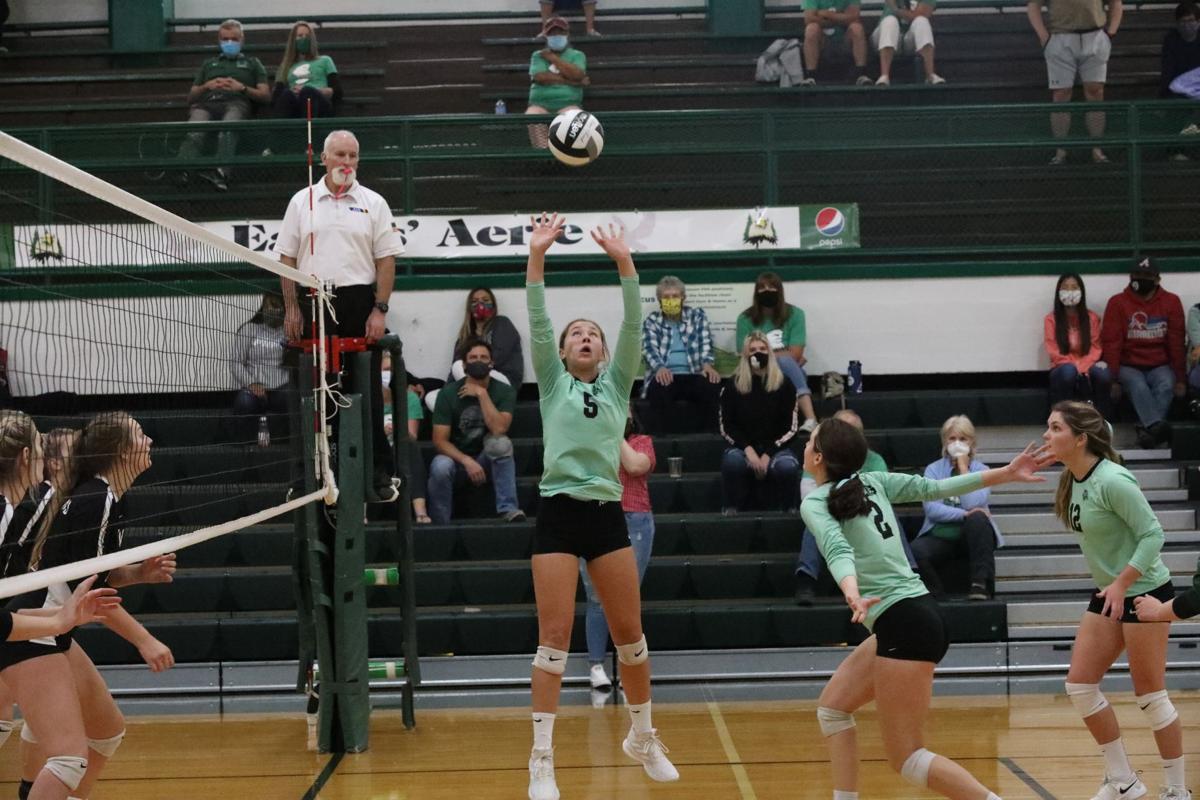 Flagstaff volleyball's Gracelyn Nez is slowly but surely easing her way back to her old self, and showed more of her usual talent Saturday morning against Lee Williams.

The Eagles star outside hitter has missed a few matches due to an ankle injury and was finally cleared to return to practices this week.

While she didn't start Saturday's match, she basically played starters minutes in the ninth-ranked 4A Conference Eagles' 25-20, 25-17, 25-23 sweep over the No. 27 Volunteers in the War Memorial Gymnasium.

Nez had some jitters in the first set, but not because she was scared to re-injure her ankle. It was more the pure excitement of being back on the court even if missing time in a condensed season was hard for her.

"Today when Beth (Haglin) told me, 'Grace, you're going in and you're going to stay in,' I was so nervous," Nez said. "This game kinda got my jitters out. ... The season is so small, so it's really hard especially because the games that got canceled in the beginning and cramming them all now in the last three weeks is really hard."

She didn't quite play like herself in the opening set, which Flagstaff had to gut out after leading just 20-18 late. Nez came on late in the opener, terminating a ball like Flagstaff fans expect to see to set up match point, where Alyssa Prager blocked a Lee Williams attack to end it.

That kill looked like it gave Nez a bit of a boost. She found her groove, was moving around the court well and communicated with her team in ways her head coach has become accustomed to.

From there Nez played her game. A mix of power and finesse, letting balls rip when she can but also picking her spots and getting the Volunteers to scramble on precise hits.

"You can handle the power -- well not really, realistically -- but you can handle the power because you set a block, channel the ball to you and get down and buckle down and dig the ball," Haglin said. "But what's tough about it is the minute you're on your heals she drops the ball in front of you. The minute you're running up thinking she's gonna drop it, she's taking your head off."

Nez finished 13 digs, seven kills and one block in her first real match in a few weeks.

"I think her timing was off a little," Haglin said. "Yesterday's practice she was annihilating the ball, and I feel like she in the beginning was nervous to get back -- not because of her ankle just to get back into the game."

Haglin said she told Nez to settle down a bit and once that happened Nez started playing like herself a bit more.

Nez's return comes just at the right time, as Flagstaff has seven matches left in the regular season -- one against No. 4 Notre Dame Prep (8-0, 8-0 4A West Valley). Haglin has wanted her team to peak at the right time, and with her full lineup finally back after some absences, the Eagles are set up to do just that.

But there has been a silver lining to the missing pieces. Because of the ongoing pandemic, volleyball teams weren't allowed to participate in any massive in-season invitationals. Those invites usually would give Haglin a chance to mess with the lineup and experiment, but now she has had to do it on the fly.

"Just trying to figure out where the puzzle pieces go," Haglin said.

Players such as Ainsley Thomas have gotten a chance to show what they can do in expanded roles. Thomas has impressed playing in Nez's spot, going for seven kills and nine digs against Lee Williams.

As a team eight different Eagles recorded kills in the Saturday win, with Nez and Thomas leading offensive charge. Bridget Bond set up her teammates with 19 assists and added in three kills and five digs.

Flagstaff tallied the sweep after it suffered a 3-0 loss to Prescott Thursday night.

The Eagles (8-1, 7-1 4A Grand Canyon) hosts No. 23 Coconino in the first crosstown match of the season after the first was canceled due to Coconino's COVID-19 exposure.

4A football playoffs: No. 5 Coconino gets road test at familiar opponent No. 4 Cactus

After shutting down one high-powered offense in the 4A Conference state tournament play-in round, the Coconino Panthers are going to have to d…

A pair of Flagstaff players attempt to block an attack by Lee Williams Saturday morning at the War Memorial Gymnasium.