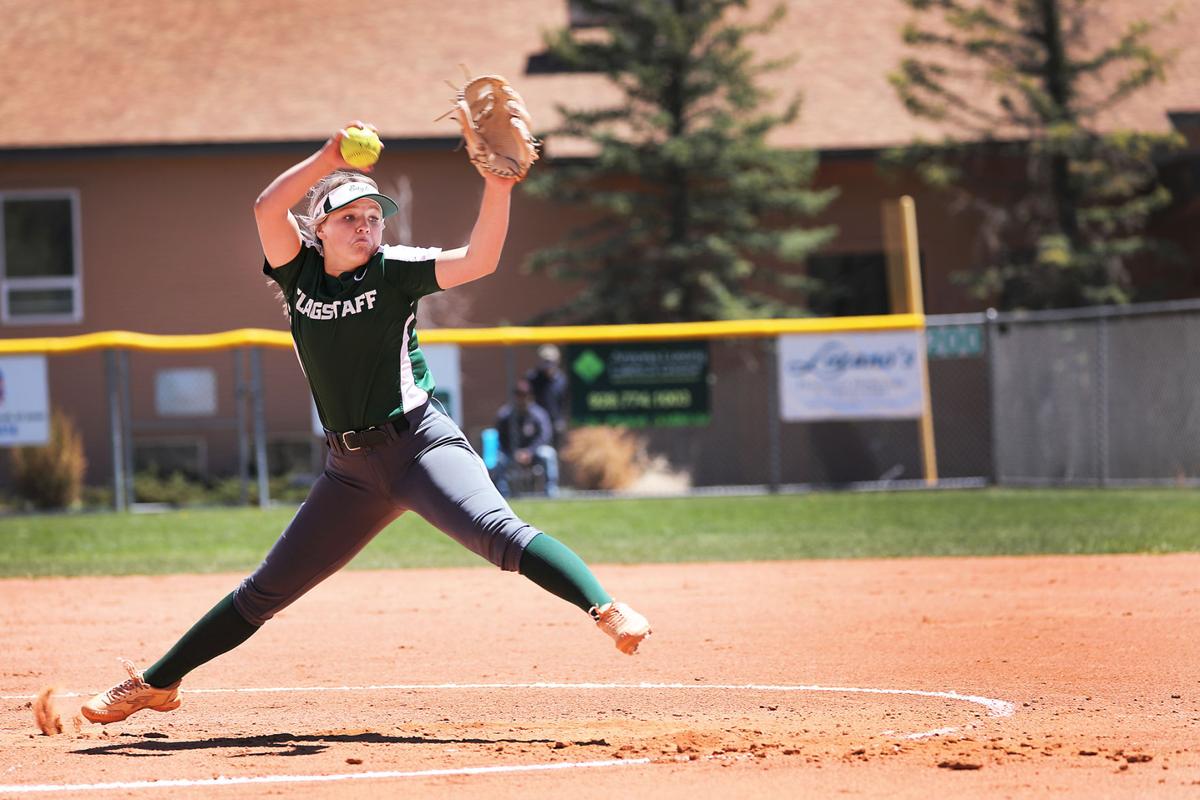 Flagstaff Eagles pitcher Gracie Schmitz (13) gets airborne as she winds up against Cactus Saturday afternoon during a game at Flagstaff High School. 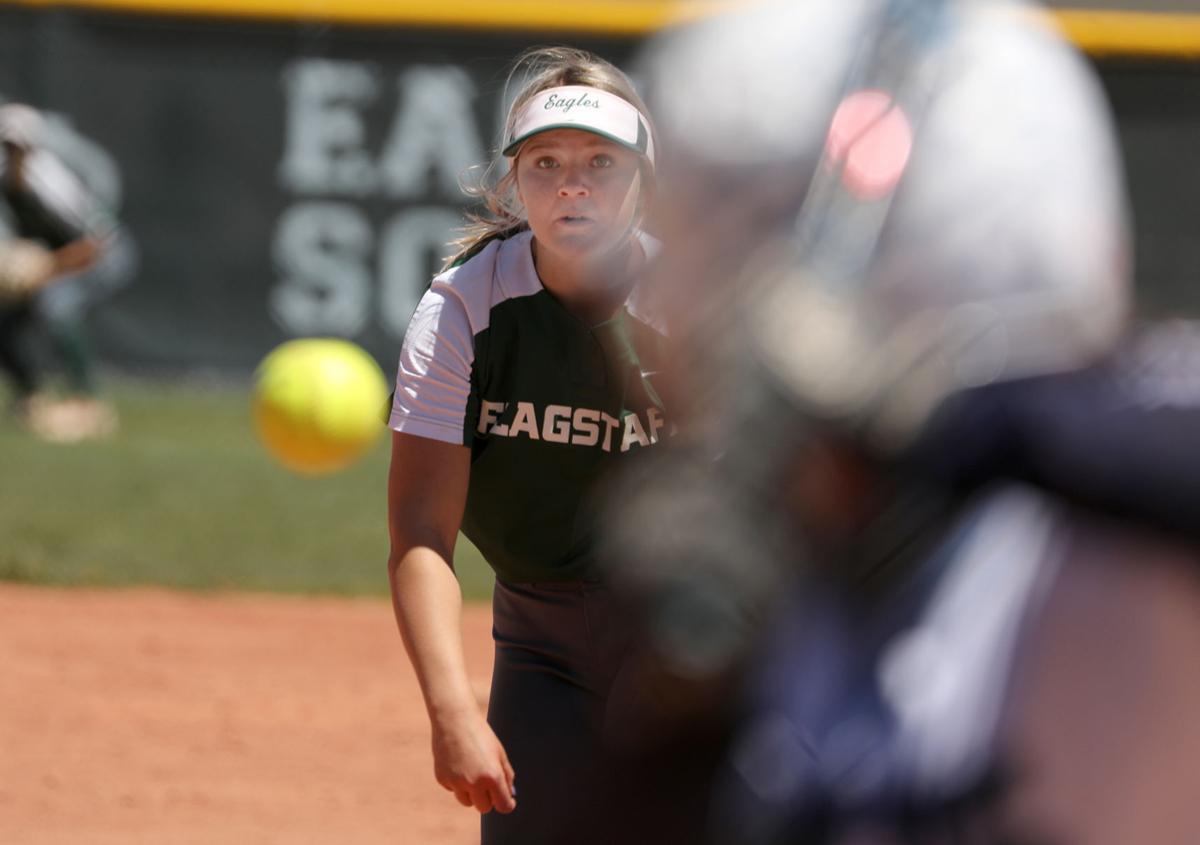 Flagstaff’s Gracie Schmitz watches her pitch as it enters the strike zone during a game against Cactus Saturday at Flagstaff High School. 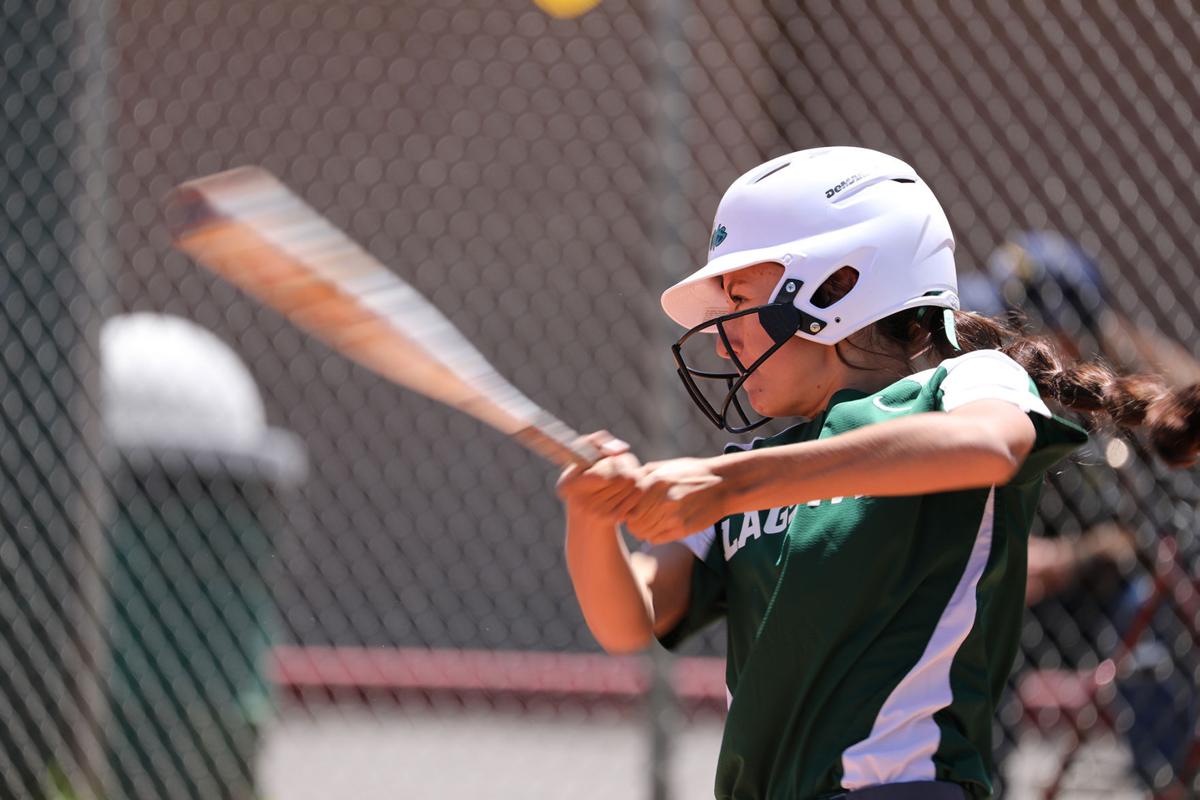 Flagstaff’s Reese Elliott (9) catches the edge of the ball while batting against Cactus Saturday afternoon during a home game. 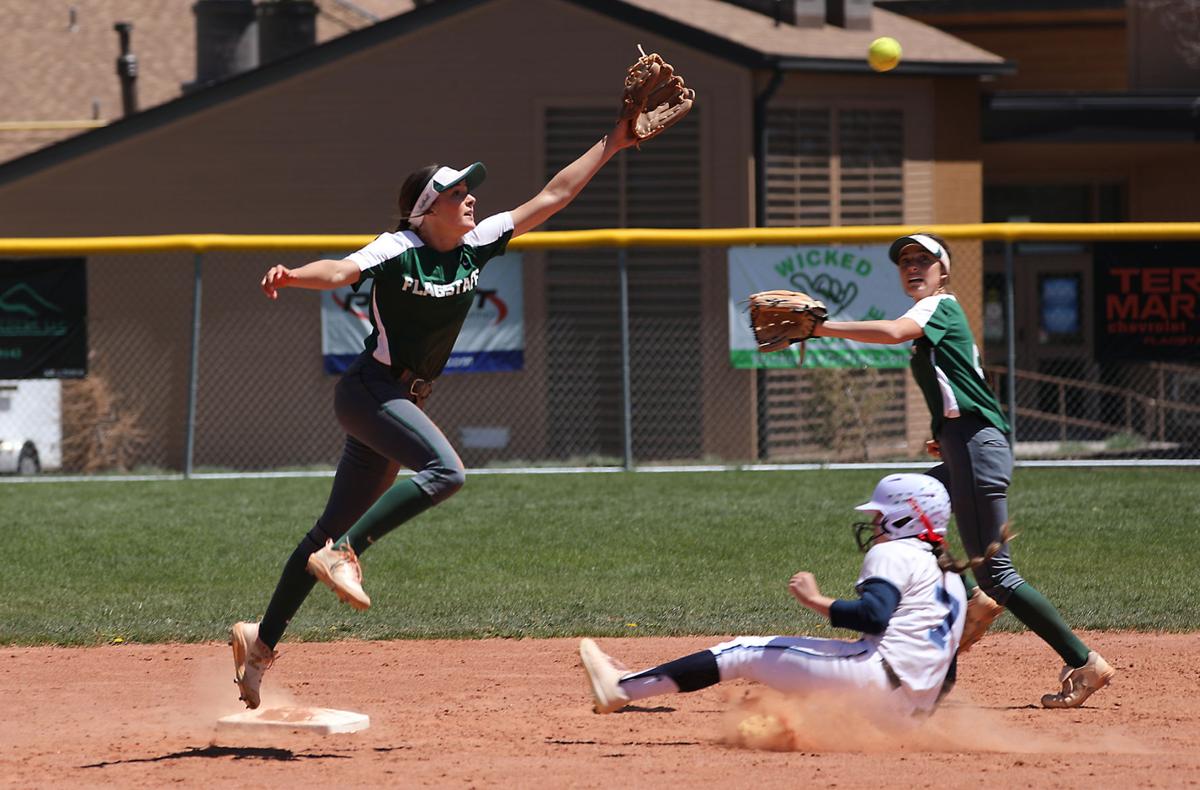 Flagstaff’s Reese Elliott (9) jumps for the ball over a Cactus player sliding into second Saturday afternoon during a game at Flagstaff High School.

The Flagstaff softball team is one of the best in the 4A Conference. Going into Saturday’s matinee game against the Cactus Cobras, the Eagles were ranked No. 3 and were hoping to stay hot. Their eight-game win streak came to an end, as the Cobras got out to an early lead and never let it go, taking out the Eagles 9-3 at Flagstaff High School.

Eagles starter Gracie Schmitz came into the game as one of the Eagles’ best pitchers, but the Cobra bats were able to get to her early, scoring two runs on four hits in the first inning. Schmitz would settle down for the second and third innings, giving up no runs and striking out three in the span. However, the Cobras would strike again in the fourth, adding two more runs and knocking Schmitz out of the game in the fifth.

The Eagles' bats started out slow, with only a few quality at bats, and leaving too many runners on base. However, the Eagles closed the gap in the sixth inning, with senior Lily Anderson hitting a three-run home run to close the gap.

After Anderson’s home run, the Eagles closed the gap 5-3, but they were unfortunately hit hard again by the Cobras offense, with Cactus adding three runs in the sixth, and one more in the seventh.

With slow bats and pitching not holding up, the Eagles dropped their third game of the year, with their previous two losses coming from the undefeated No. 2 Mingus Union.

Even with the loss, Hernandez is still very happy with his squad, saying how he is very proud of how his team has performed throughout the season.

“They just got to keep their head up. They are still 12-3 and are still an awesome team,” Hernandez said. “We did make a lot of small mistakes today, we had too many errors that hurt us and scored. But the positive is that they are still a great bunch of girls and they are having fun with each other.”

Hernandez also talked about his expectations for the rest of the regular season and on route to the playoffs.

“As of right now, with what I have, I think we are going to keep winning games,” Hernandez said. “With the way they have been playing, today was just an off day, but in the previous games, these girls are playing some really good softball.”

The Eagles will get a long break from competition to get back into winning form, with their next game set for Thursday at 3:45 p.m. against the Tempe Buffaloes as Flagstaff closes a three-game homestand.

Flagstaff Eagles pitcher Gracie Schmitz (13) gets airborne as she winds up against Cactus Saturday afternoon during a game at Flagstaff High School.

Flagstaff’s Gracie Schmitz watches her pitch as it enters the strike zone during a game against Cactus Saturday at Flagstaff High School.

Flagstaff’s Reese Elliott (9) catches the edge of the ball while batting against Cactus Saturday afternoon during a home game.

Flagstaff’s Reese Elliott (9) jumps for the ball over a Cactus player sliding into second Saturday afternoon during a game at Flagstaff High School.