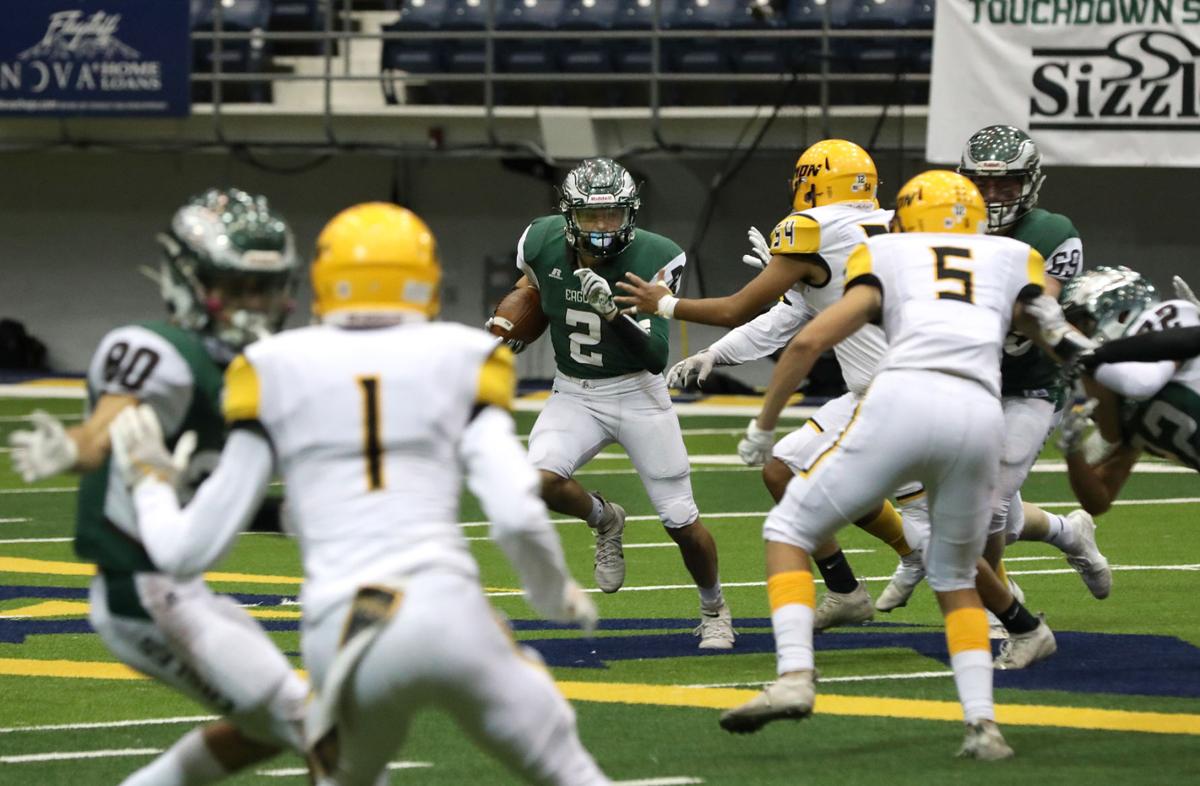 Flagstaff’s Jadon Wetzel (2) looks for a lane through the Marcos de Niza defense Friday night in the Walkup Skydome. 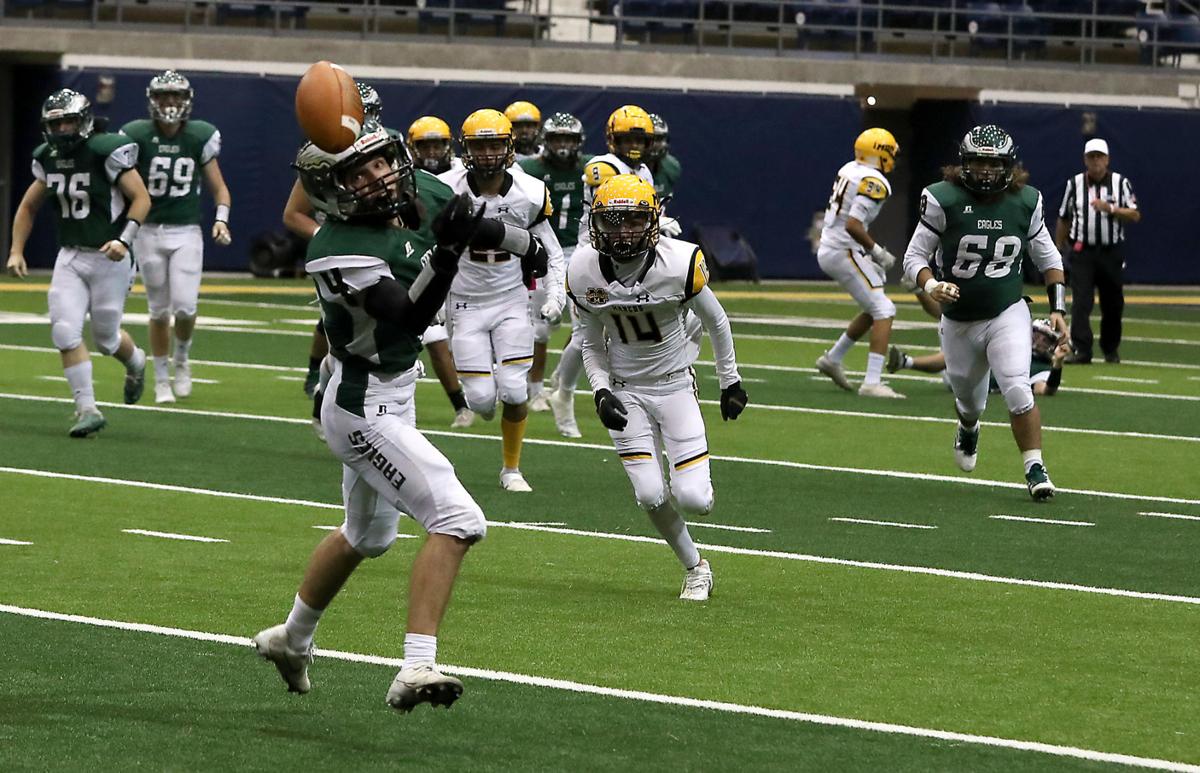 Flagstaff’s Holden Sena (4) watches the ball after it bounced off his fingertips Friday night during his teams home game against Marcos de Niza in the Walkup Skydome. 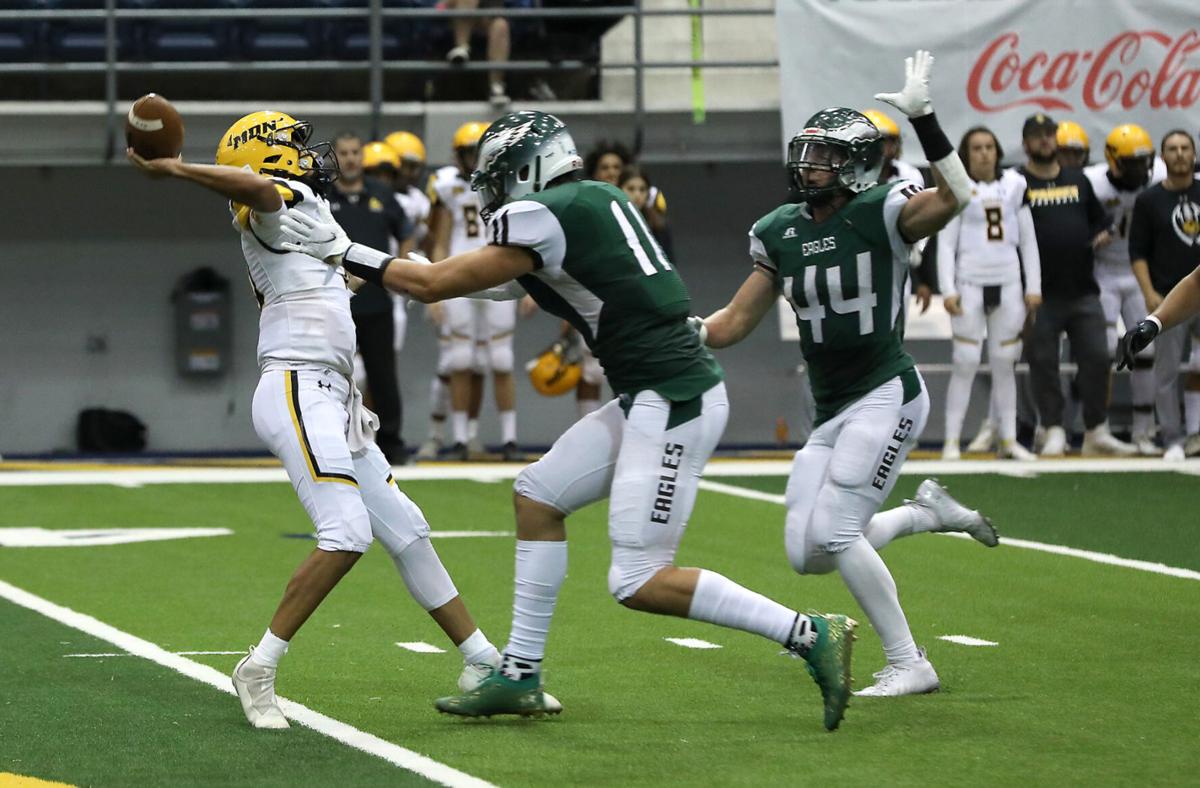 Flagstaff’s Nick Morrow (11) and Spencer Smith (44) get to the Marcos de Niza quarterback Friday night in the Walkup Skydome. 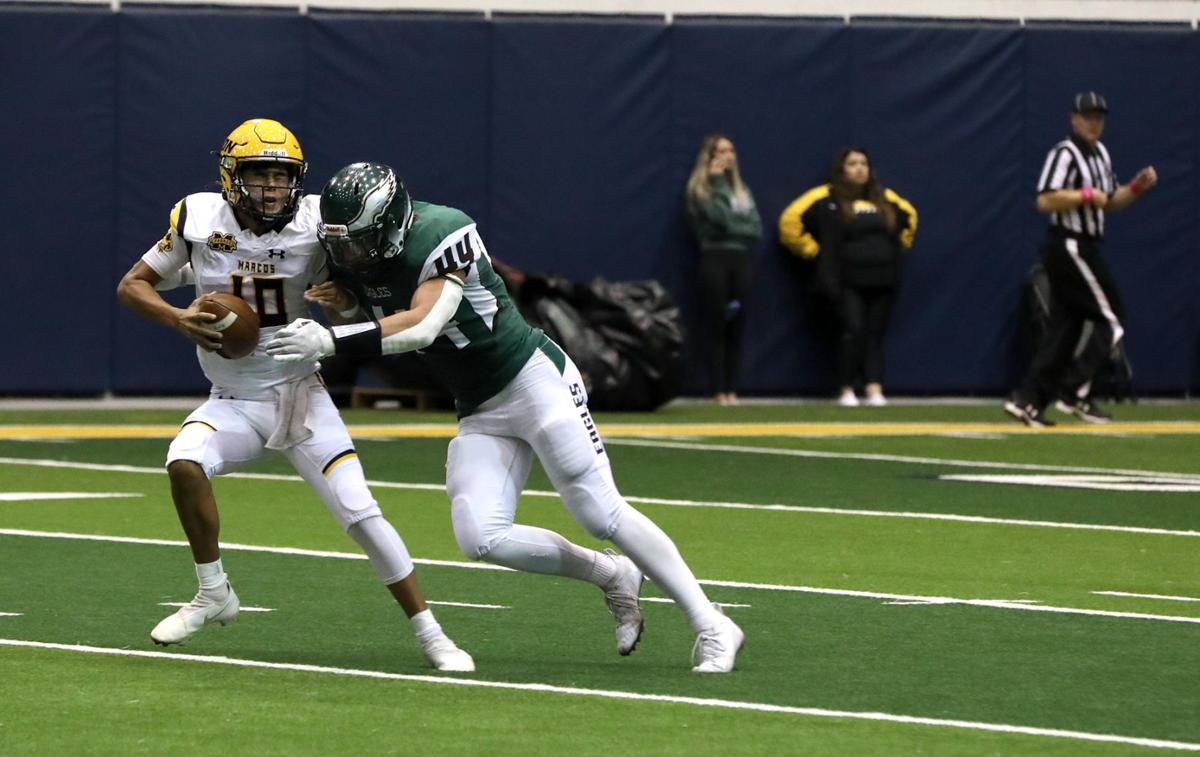 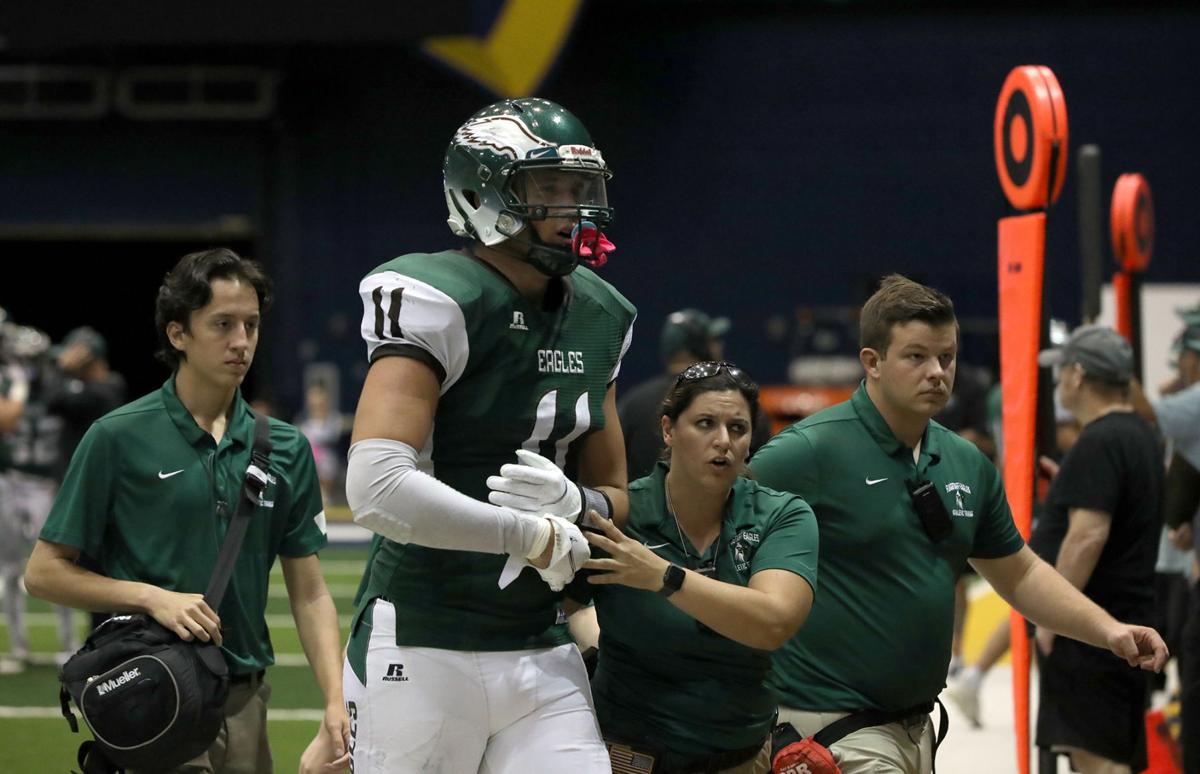 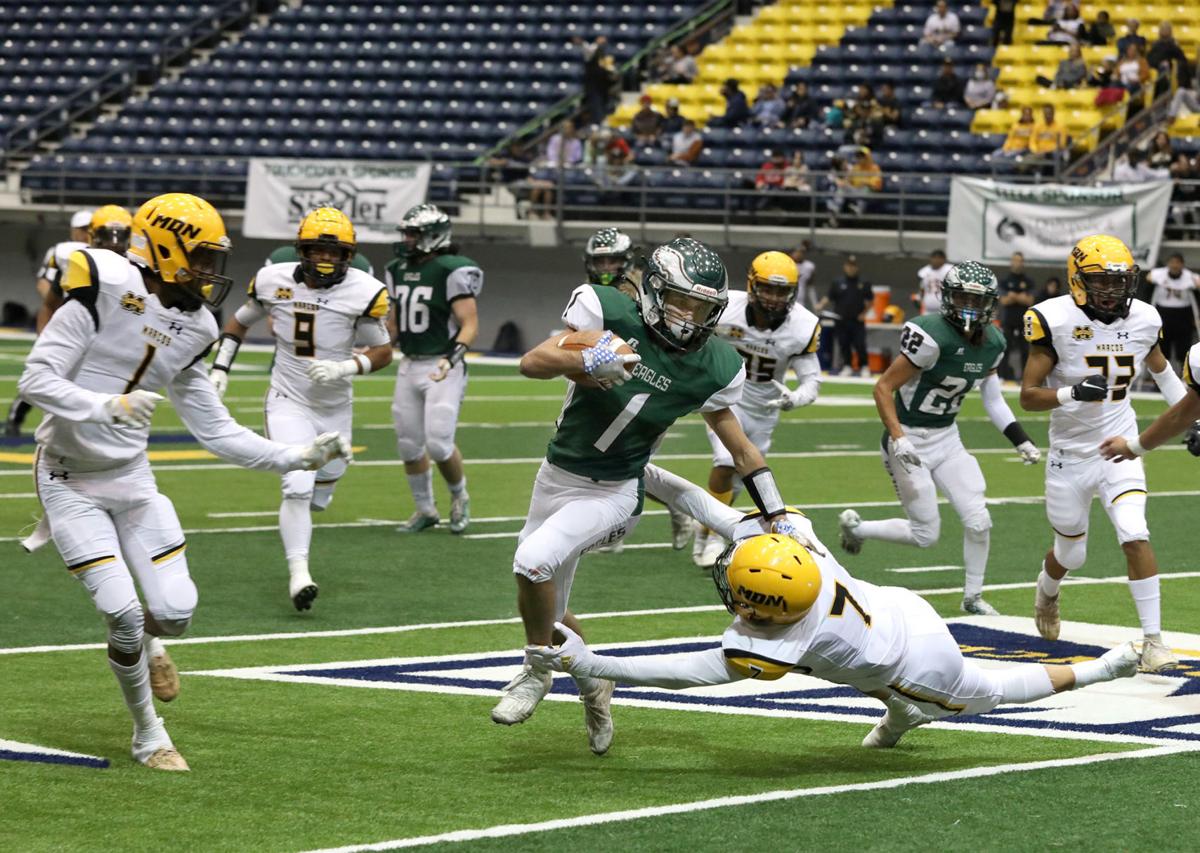 For the second week in a row, the 4A Conference Eagles fell behind 14-0 after a slow start and came up short in a comeback attempt.

The inefficient first two quarters offensively Friday were due in part to several injuries. Before the game started, Flagstaff was without senior offensive lineman Kevin Borrego, senior wide receiver Jake Weidinger and senior running back Marcus Salcido, each sitting with nagging ailments. Senior Nick Morrow left the game because of his hand in the first quarter, and junior receiver Holden Sena went out because of his knee, among other hurt players.

“We probably had six penalties in the first half. And then that injury bug came out, but we’ve got to find a way to get past that,” Manning said.

Marcos de Niza scored first late in the first quarter en route to breaking its two-game losing streak that started with a loss to Coconino. After an opening drive that took over nine minutes off the clock, the 4A Padres were in scoring position, but a sack by senior Spencer Smith on third down and an interception by senior Collin Doucette on fourth down allowed the Eagles to keep the game scoreless.

On the ensuing drive, the Eagles fumbled and the Padres recovered the ball at Flagstaff's 17-yard line. Marcos de Niza capitalized on the great field position to go up 7-0 with 33 seconds left in the first period.

On the next two drives, Flagstaff’s defense held and gave the offense excellent field position. The Eagles got inside Marcos de Niza’s red zone on both drives, but were intercepted on the first and turned the ball over on downs the second time. Marcos de Niza led 7-0 at halftime.

“We gave the offense an opportunity to score, but it’s a team sport, and it just didn’t go our way,” Smith said.

Out of the break, Flagstaff’s defense was excellent again on the first drive. The Eagles forced a turnover on downs, but the offense fumbled again in Padres territory. Marcos de Niza responded with its best offensive drive of the game, taking a 14-0 lead on a pass from sophomore Braesen Leon to junior Brody Bybee midway through the third quarter.

Flagstaff responded with its best offensive drive of the game. The Eagles appeared to stall twice, but a pair of fourth-down conversions kept hope alive. IN a fourth-and-11 situation, Bodie Maier ran out of the pocket for a gain of 12 yards. Four plays later, the quarterback hit sophomore Tyson Buckley on a 12-yard pass on fourth and 10 to extend the drive again.

“It’s not just athletically being able to pull things out like that, but just his poise,” Manning said of Maier. “We expect that. He’s got to remain calm and he does that.”

Senior Gage Betts pounded the ball in from a yard out with 11:03 left in the game to cut the deficit to 14-7.

From there, Flagstaff forced the Padres to punt, but could not move the ball themselves on the ensuing drive and punted it back. The teams traded possession until Flagstaff forced another punt with 3:16 left in the game and a chance to drive the ball for a tying score.

The Eagles had two short plays and threw a screen pass to Smith on third down for what looked like a first down, but was called back due to a holding penalty. A few plays later, with 2:15 left in the game, Flagstaff, with just one timeout remaining, had the ball on fourth down and needed 3 yards to keep hope alive.

Maier threw a pass, but the receiver dropped it and the Eagles turned the ball over on downs.

Needing a defensive stop to have a chance at a miracle touchdown, Flagstaff forced the Padres into a third down, needing 3 yards to secure a new set of downs and finish the contest. After two consecutive runs, the Padres threw a screen pass, and the receiver ran all the way to Flagstaff’s 1-yard line. The Padres knelt out the clock and won 14-7.

The Padres were Flagstaff’s final opponent from out of the Grand Canyon Region in the regular season.

In the four remaining games, the Eagles face just region rivals, and they are looking to go undefeated the rest of the way.

“Especially going into region play, we’ve got to be perfect after this. All of this is motivation, and we’re going to learn from it. It’s in the past now,” Smith said.

Flagstaff now has a bye week before hosting Bradshaw Mountain on Friday, Oct. 22. With many key players banged-up, a week off after six straight games will be a welcome chance at recovery.

“Thank God the bye week is coming up,” Manning said. “I didn’t think we’d need it as much as we do, but we need it badly.”

Flagstaff’s Jadon Wetzel (2) looks for a lane through the Marcos de Niza defense Friday night in the Walkup Skydome.

Flagstaff’s Holden Sena (4) watches the ball after it bounced off his fingertips Friday night during his teams home game against Marcos de Niza in the Walkup Skydome.

Flagstaff’s Nick Morrow (11) and Spencer Smith (44) get to the Marcos de Niza quarterback Friday night in the Walkup Skydome.