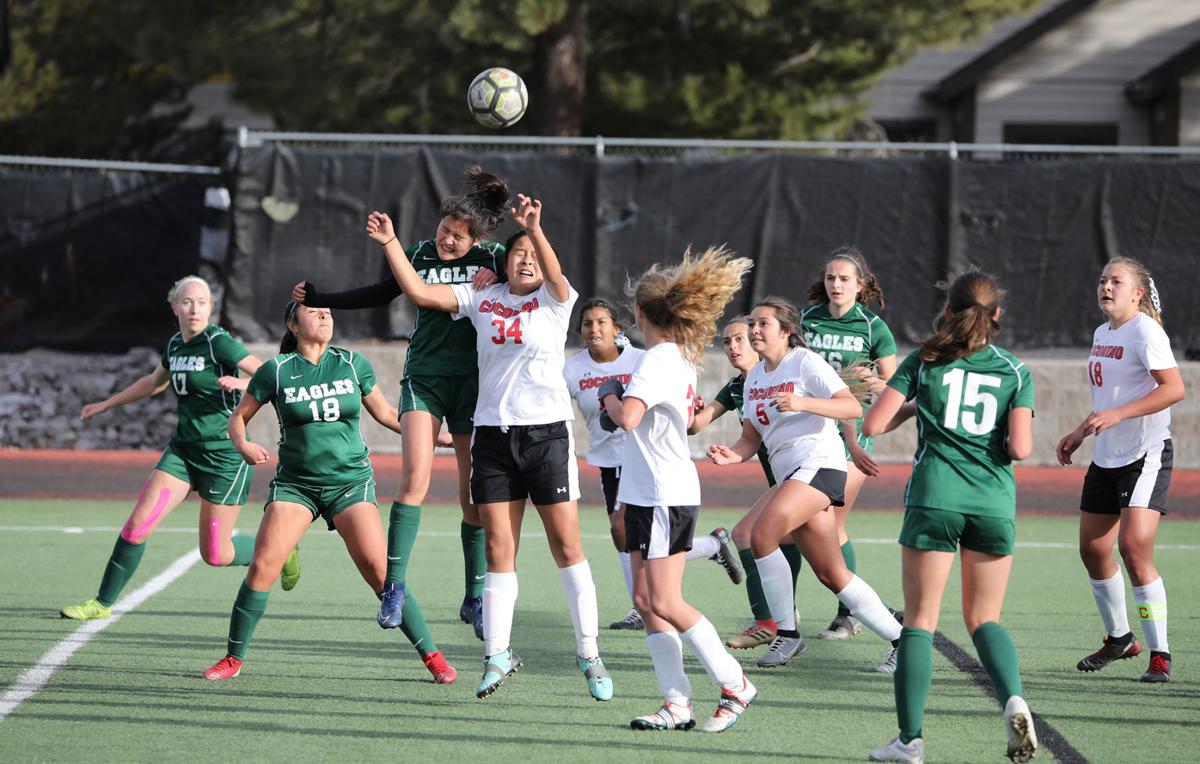 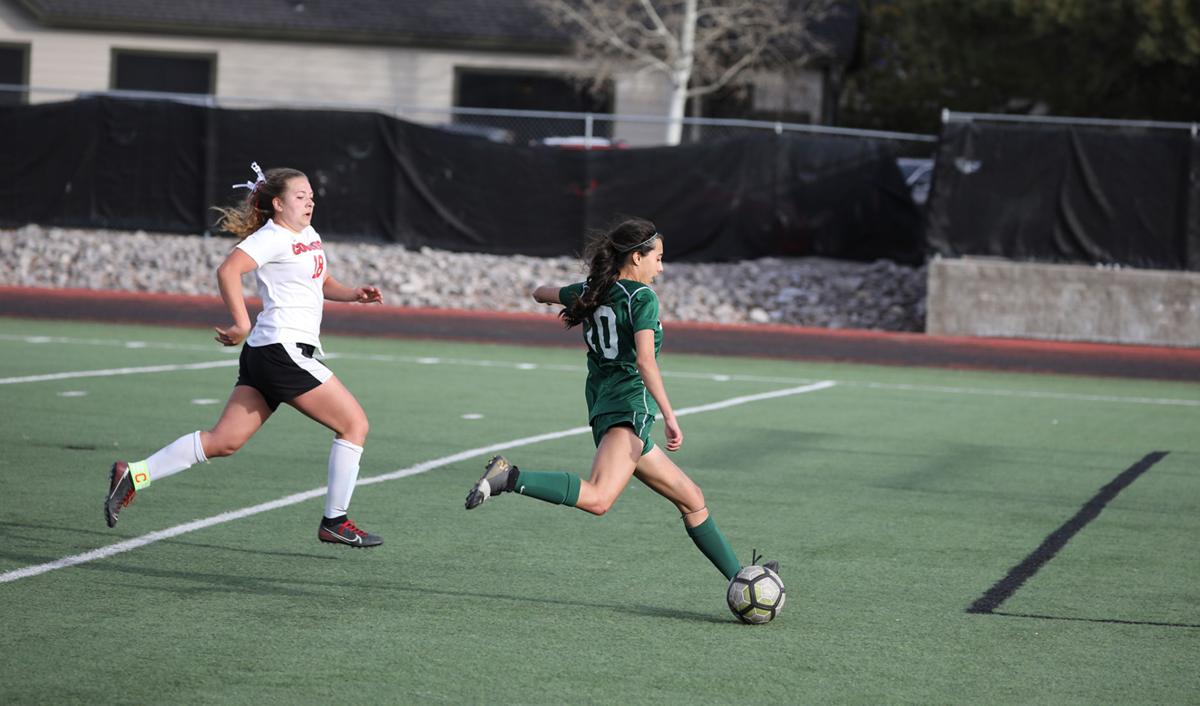 Flagstaff’s Mayrin Soto (10) scores against Coconino in the second half of Flagstaff’s home game Thursday afternoon. 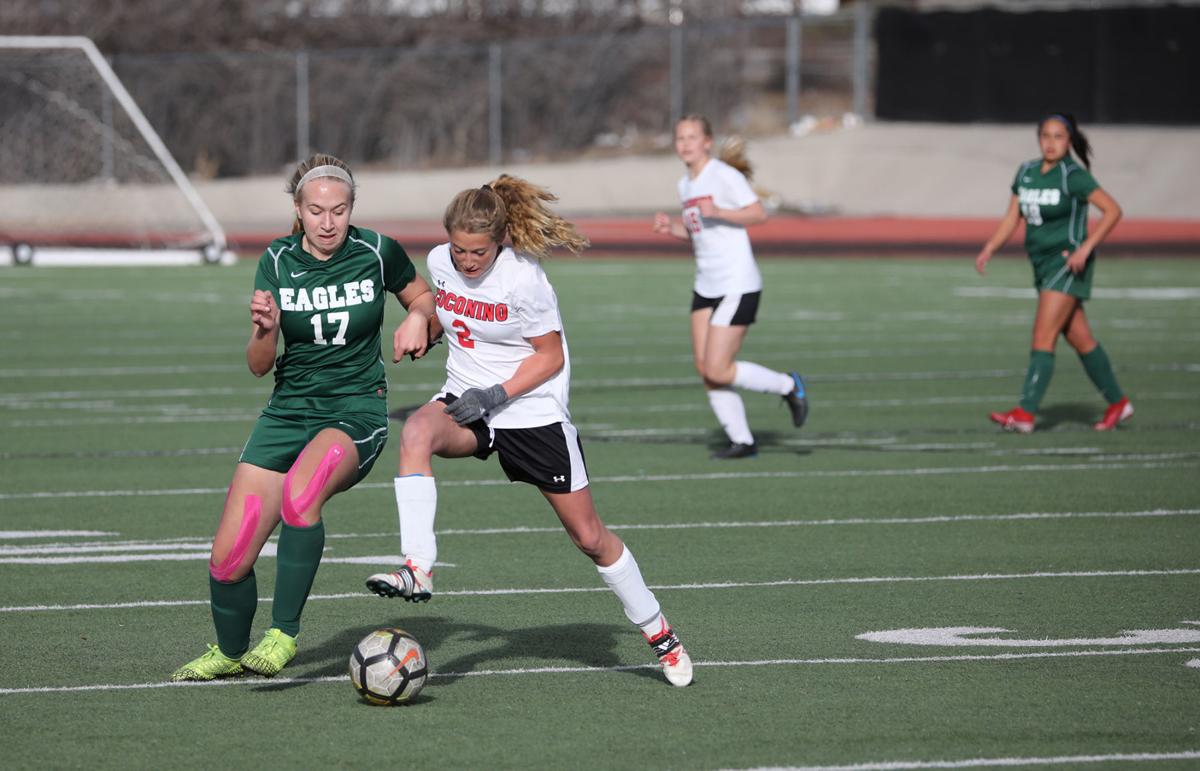 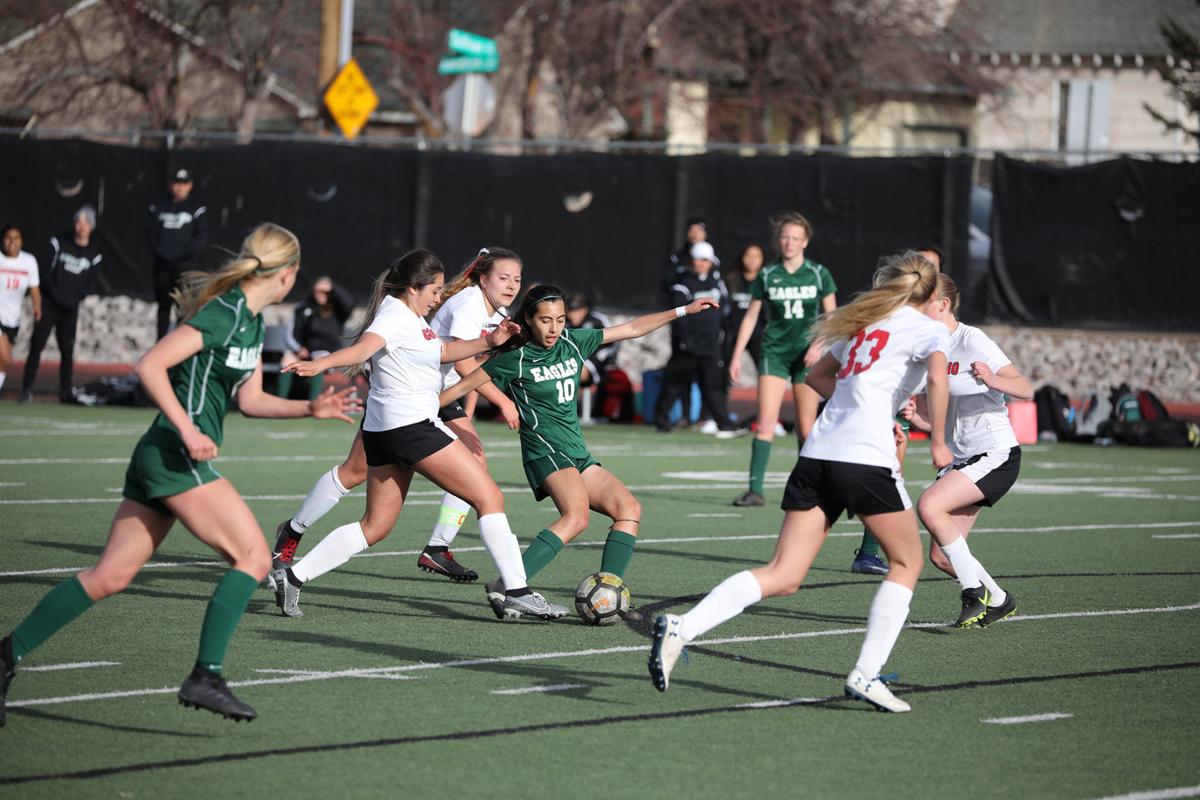 Flagstaff’s Mayrin Soto (10) works her way through the Coconino defense on her way to score a goal in the second half at Flagstaff High School Thursday afternoon.

Coconino brought about all it had in Thursday’s crosstown girls soccer match against Flagstaff at Flagstaff High School.

The Eagles, ranked No. 4 in the 4A Conference entering the day, took a 3-0 win over the No. 27 Panthers, whose chance at a state play-in berth is nearly zero following the loss. The Eagles shut the Panthers out and earned their ninth straight win over their rival -- all coming via shutout wins.

Coconino (4-6-1, 0-5 Grand Canyon Region) has one match left on its regular-season slate as it faces No. 14 Lee Williams at home on Saturday, hoping to avoid a winless region record for the year. The match is a make-up due to a cancellation earlier in the season caused by the weather.

Meanwhile, Flagstaff (10-2, 5-1 Grand Canyon) awaits its final ranking in the conference -- which will likely land the team somewhere in the top five of the power points rankings.

This season the Eagles only lost matches to No. 1 Prescott and No. 2 Arcadia.

A pair of sophomores led the way in scoring for Flagstaff on Senior Day as Mayrin Soto scored twice and Karina Fuhrman netted a late goal in the win.

Flagstaff controlled possession all game, partly because of the way Coconino defended the Eagles attack.

“I like that Coconino came out with a game plan that challenged us,” Eagles head coach Holly Jones said. “I was appreciative of their players’ hard work. It definitely challenged us. We haven’t played a team that’s really sat back and parked the bus. It was good for us to have to figure out a game plan and talk about what was happening at halftime and change up some things.”

Coconino kept most of its squad further back to keep the Eagles attack from getting much room to work in the box.

The strategy worked for most of the day, the first 60 minutes of the match in fact.

Flagstaff struggled to find the right lanes and find the proper angles on shots to start, until Soto got a rare breakaway on a long pass with about 19 minutes left in the second half. Soto placed a low shot in the bottom right of the goal, right past Panthers goalkeeper Eija Jensen -- who played a solid match with some key saves that kept her team afloat.

“We just looked at where they were sitting and the movement we had to start making and where we can get in behind and the runs we can start making,” Jones said. “Them just being able to see it and draw it out, hopefully it clicked a little bit. I think they realized, as the games go on, the goals get more important and they dug a little bit deeper.”

It took another 10 minutes for the Eagles to get back on the board, scoring off a Soto goal from the middle in the box as she battled contact with the Coconino defender to score.

Just about four minutes later, Fuhrman stuck with a play after senior Maya Shearon had her shot on goal stuffed by Jensen. Fuhrman quickly swung from behind to put the goal in the back of the net.

The Eagles wait for the play-in round to conclude, as they will likely host a playoff match on Saturday, Feb. 15.

The Flagstaff High School volleyball team got its season started on the right foot with a 3-1 win over Prescott at home Tuesday night.

Coconino falls in 5 sets to Bradshaw Mountain in season opener

There's a silver lining in having to wait until the spring to take the court for the Northern Arizona volleyball team, which is using the chan…

The Northland Prep Academy volleyball team had its first match-up against 2A Central Region rival Valley Lutheran Tuesday night at home. With …

Flagstaff’s Mayrin Soto (10) scores against Coconino in the second half of Flagstaff’s home game Thursday afternoon.

Flagstaff’s Mayrin Soto (10) works her way through the Coconino defense on her way to score a goal in the second half at Flagstaff High School Thursday afternoon.