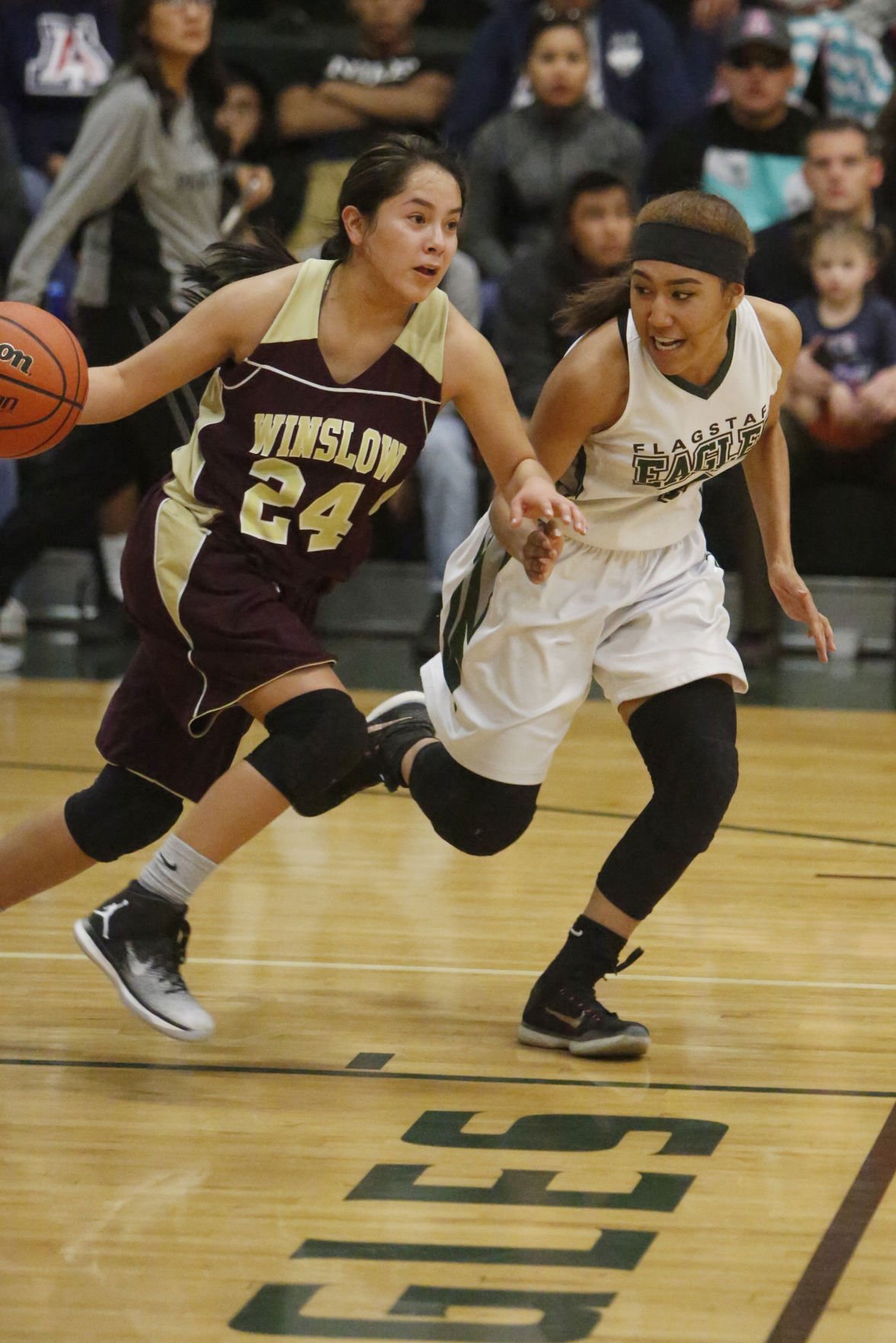 Flagstaff High School’s Monique Ware (4) runs alongside a Winslow player during the final game of the Pepsi Holiday Tournament Saturday. 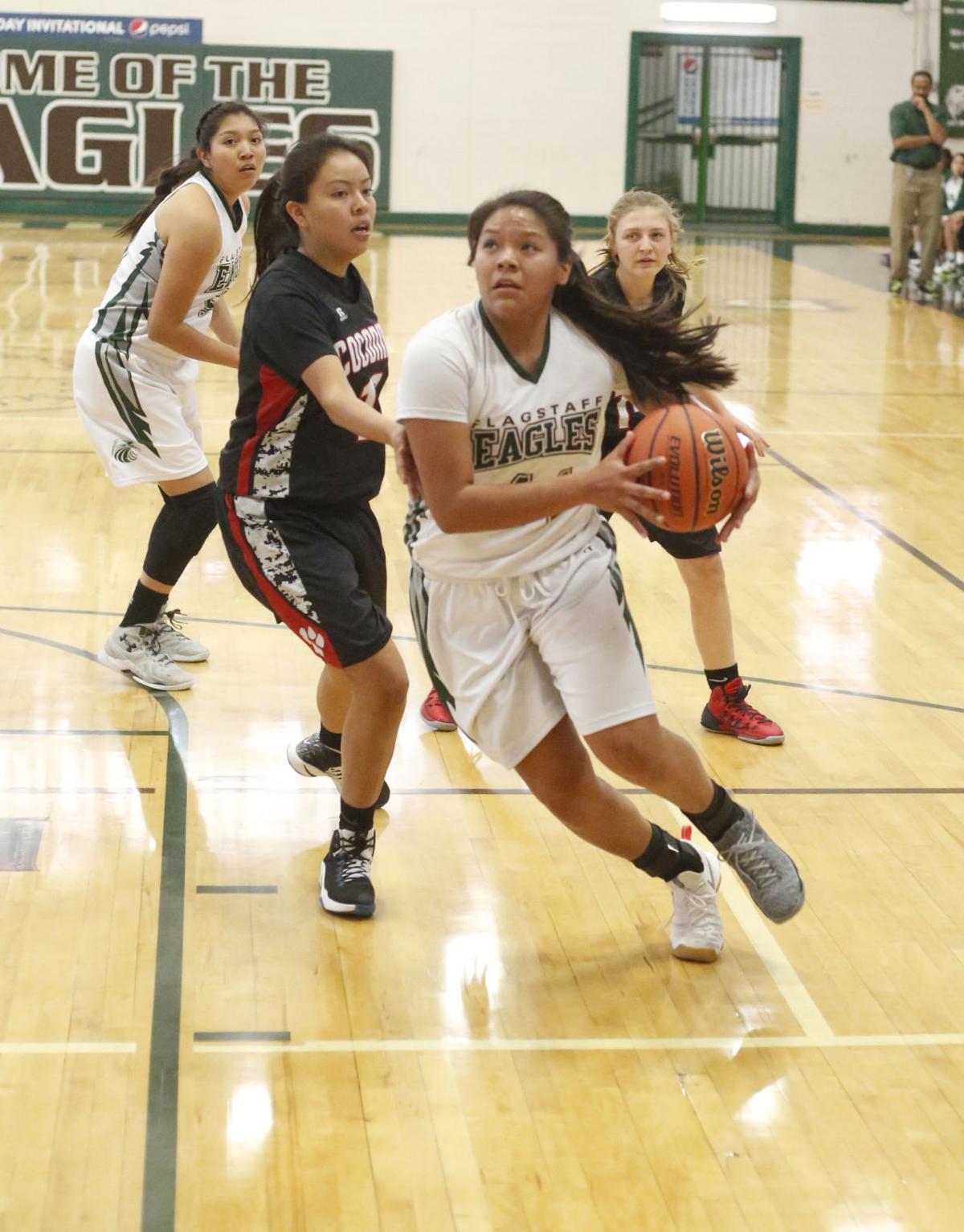 Flagstaff High School’s Mikaela Kayaani-Lee (44) moves for the basket during game action against Coconino at the Pepsi Holiday Tournament Saturday. 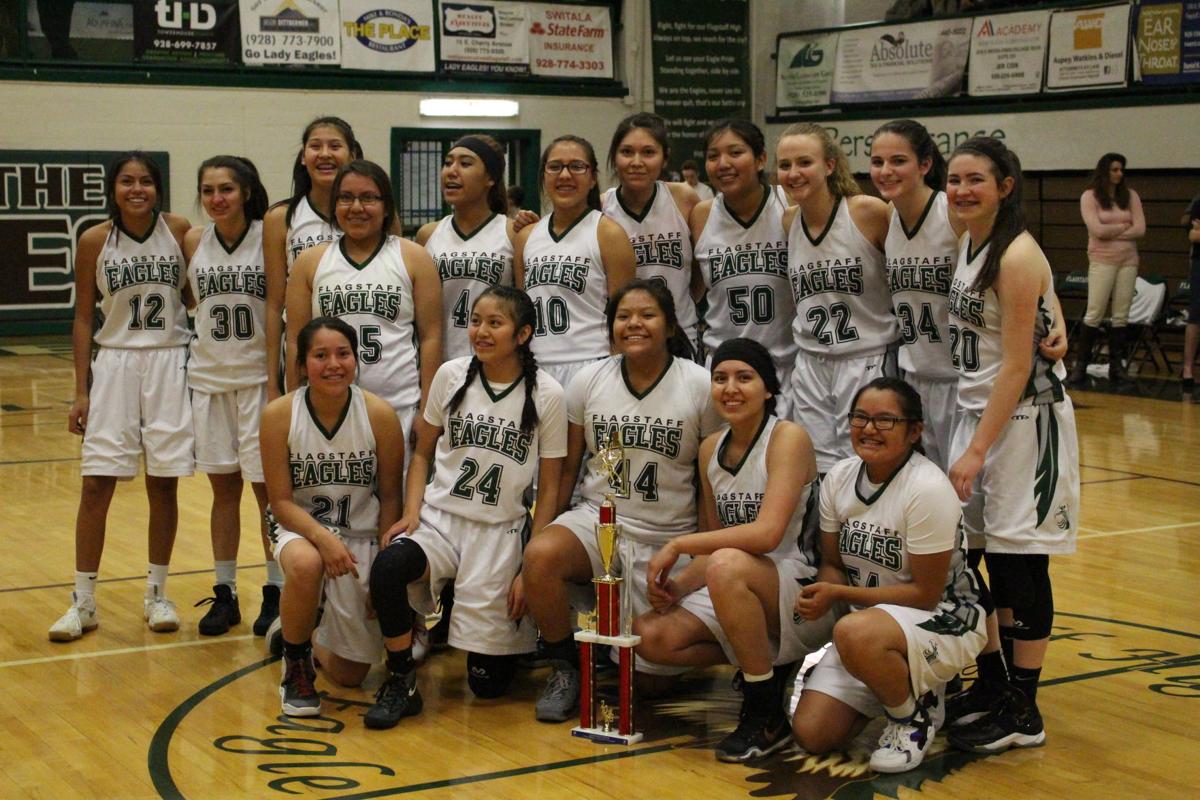 The Flagstaff Eagles pose with the first-place trophy after beating the Winslow Bulldogs in the Pepsi Holiday Tournament finals on Saturday. 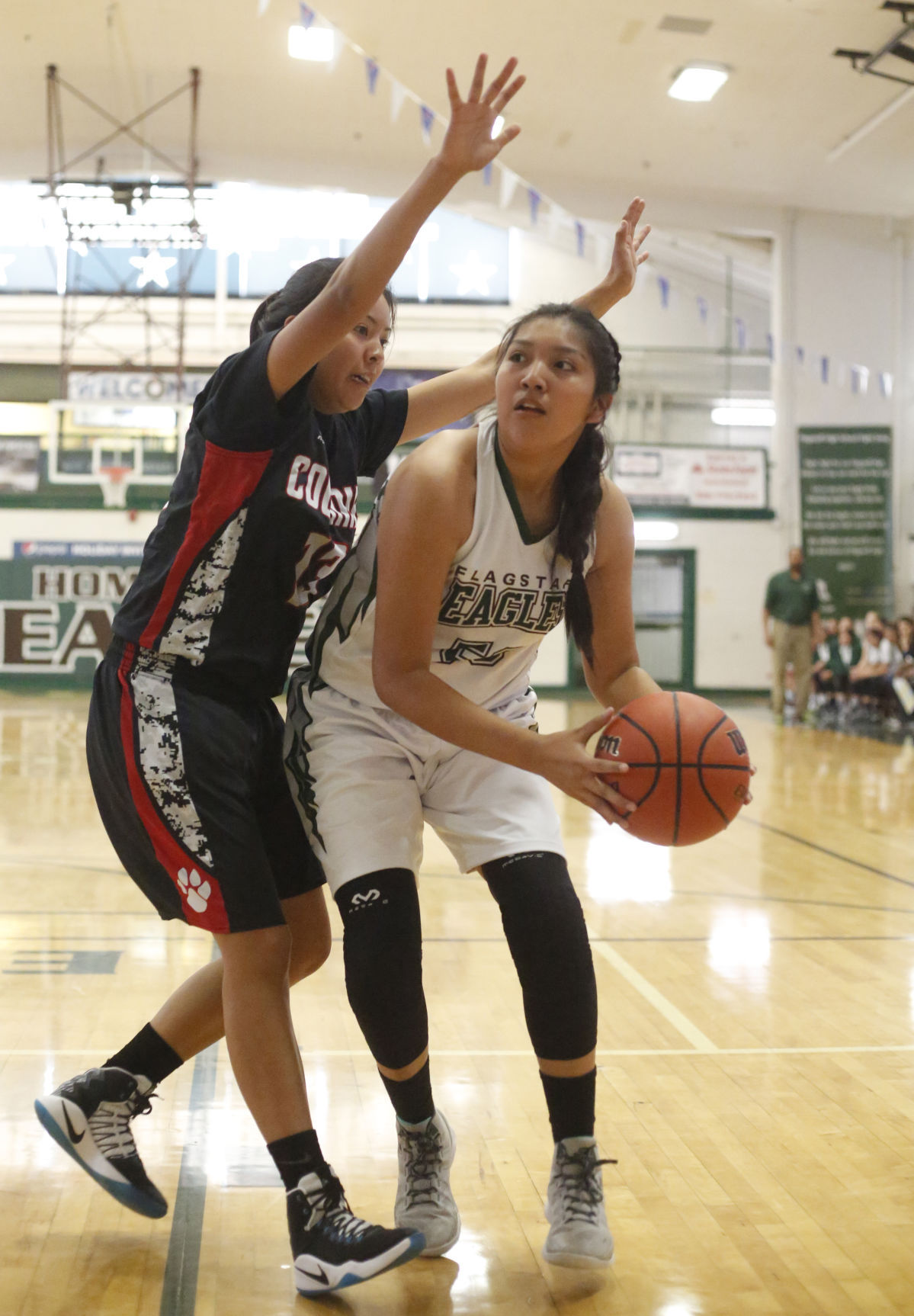 Flagstaff High School’s Reece Honanie (50) moves for the basket during game action against Coconino at the Pepsi Holiday Tournament Saturday. 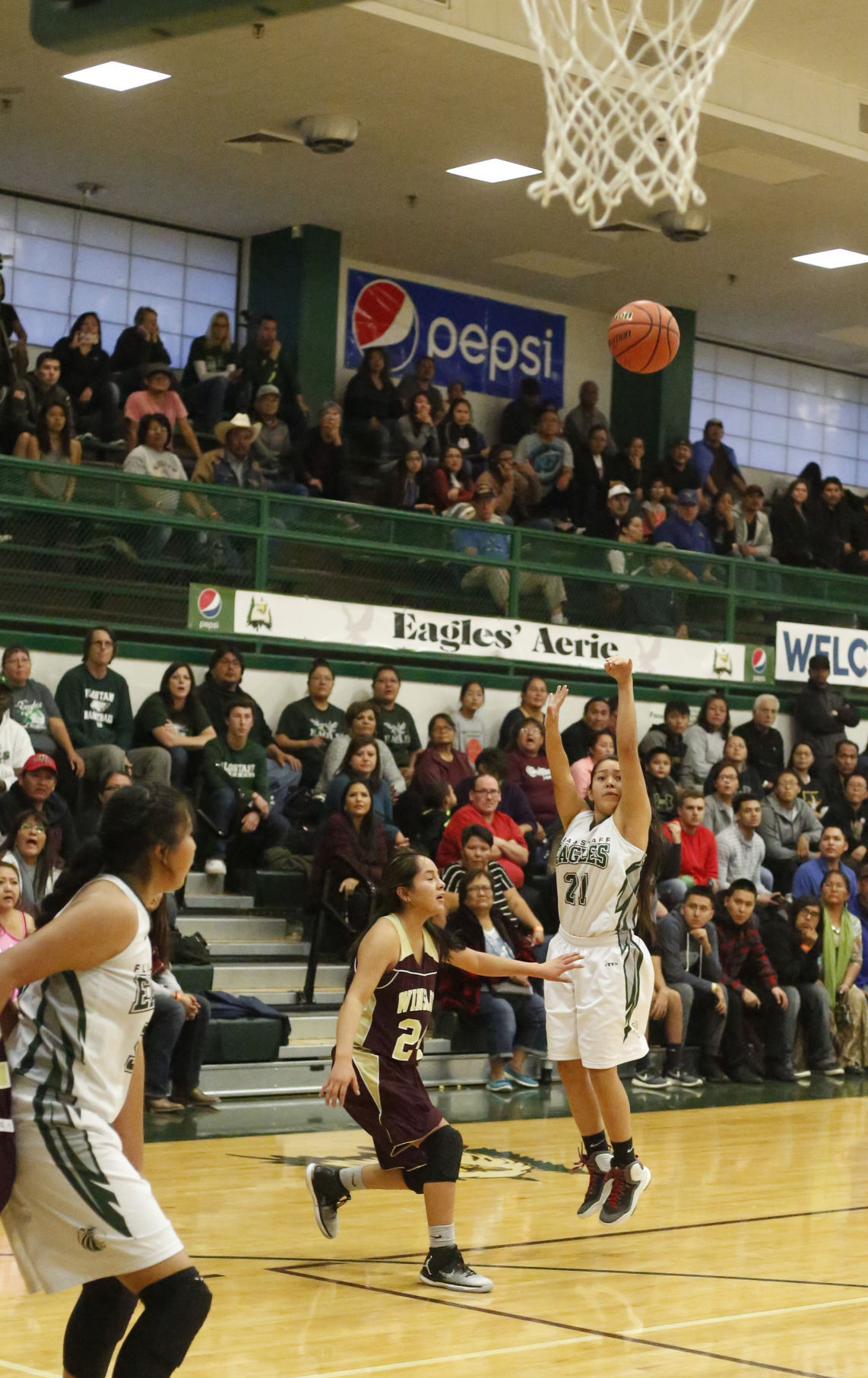 Flagstaff High School’s Audreana Hernandez (21) shoots for three during the final game of the Pepsi Holiday Tournament against Winslow Saturday. 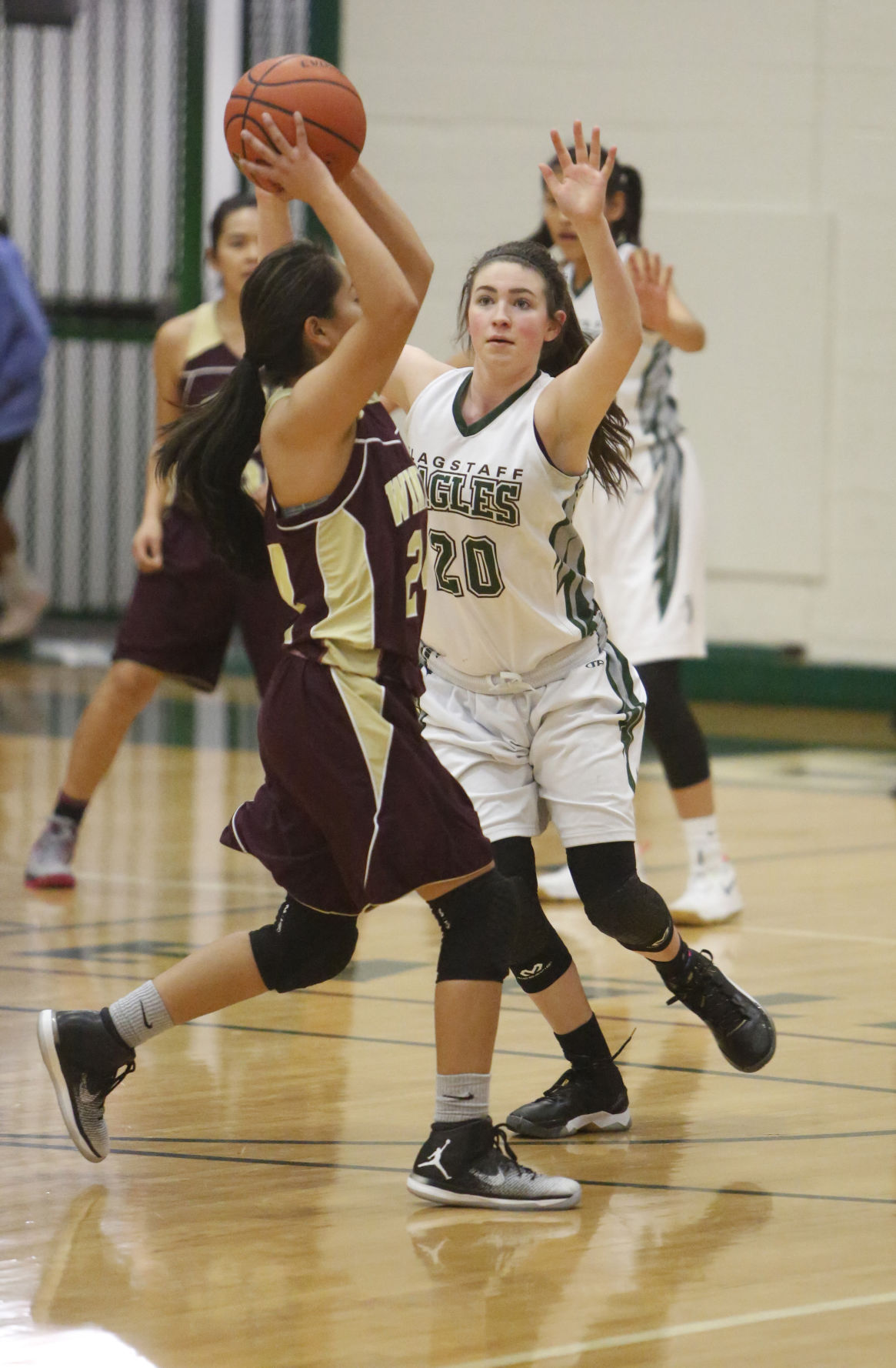 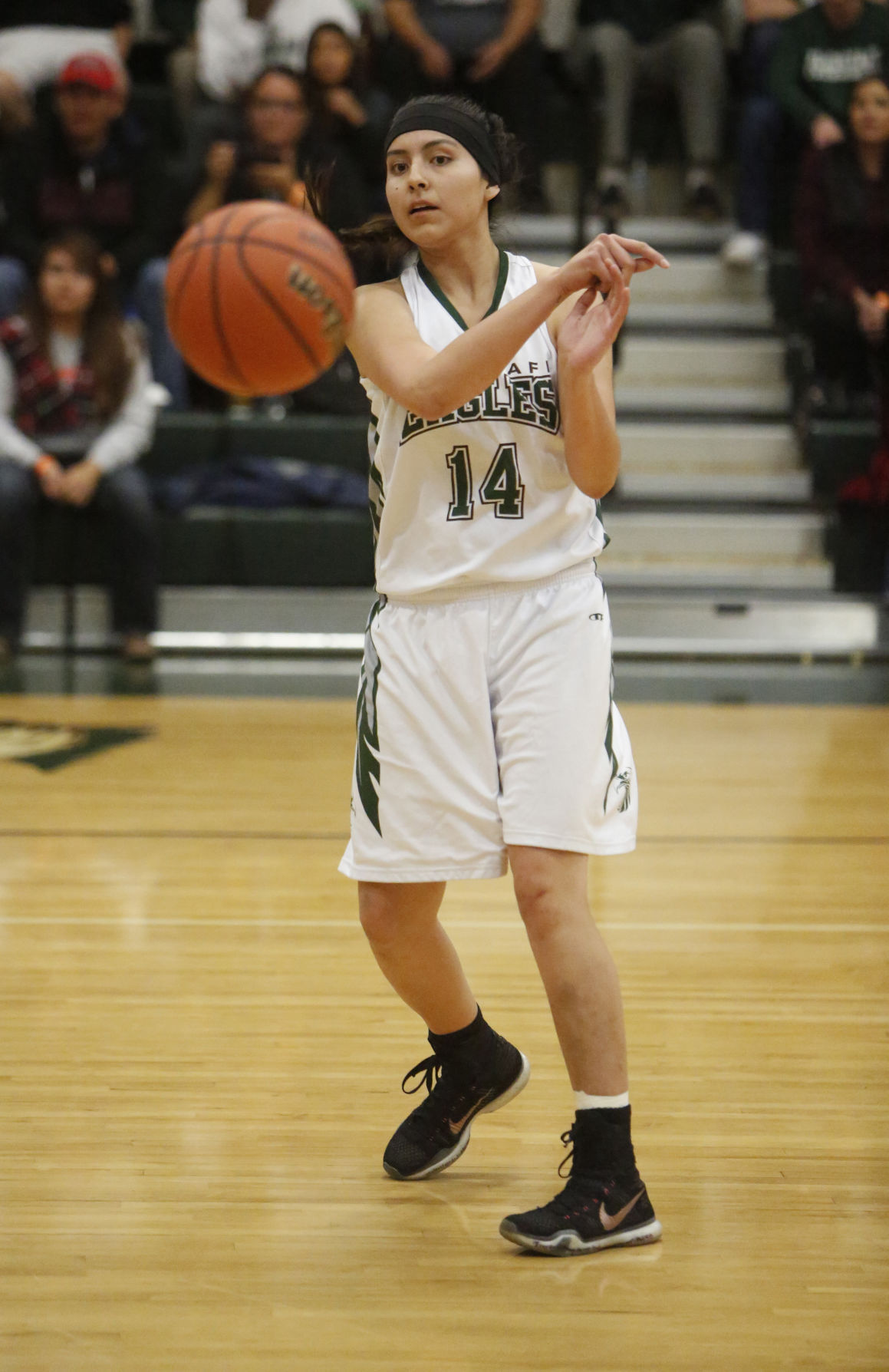 Flagstaff High School’s Nizhoni Thomas (14) passes the ball during the final game of the Pepsi Holiday Tournament against Winslow.

Writing their school name in all capital letters, members of the Flagstaff Eagles girls basketball team worked together to fill in the champion spot of the Pepsi Holiday Tournament bracket.

That teamwork helped them get through a shooting drought and garner a title.

Flagstaff came out of halftime and quickly ran up the score over their challengers, beating the Winslow Bulldogs, 64-50 on Saturday to repeat as the tournament champions.

The Eagles, the hosts of the tourney, overcame some fatigue that affected them early in their third and final game Saturday. They dug deep, however, and found the energy to go on a 16-0 run and take a devastating 47-23 lead to start the third quarter. Goodwill started the surge with back-to-back buckets, using her finesse under the rim to beat a defender before hitting a layup on a fast-break opportunity.

"I thought we were fatigued and missing some shots. Our defensive pressure wasn't the best," Eagles head coach Tyrone Johnson said of his team playing so many minutes in one day. "Playing Winslow, you gotta be on your best game in order to compete with them, because they can hurt you. I thought we got our second wind, went hard and really started to put them away."

Halfway through the third-quarter run, Flagstaff's Noni Thomas got a steal and found Begoody for a layup. The Bulldogs, a conference below the the 4A Eagles, finally stopped the bleeding five and a half minutes into the new half.

Thomas had a team-high 12 points and Monique Ware added seven for the Eagles, who went 5-0 in the tourney and defeated all opponents by double digits. Thomas and Ware both made the All-Tournament Team.

The closest a team got to Flagstaff was crosstown rival Coconino, which fell to the Eagles in semifinal round 56-46.

Winslow's senior guard Danielle James, who led all scorers with 19 points by the end of game, and Justine Butterfield were also all-tournament selections.

Flagstaff took its largest lead of the night at 52-27 in the third quarter when sophomore Hailey Armus drained a 3-pointer.

With the bench getting it done in the first quarter, the Eagles went into the second with a narrow 15-14 lead. Coming off the bench, Josephine Faull connected with Reece Honanie, who made it 12-8, but Winslow ended the opening quarter on a 6-3 run, as Flagstaff's bench-player Audreana Hernandez hit a 3 to keep her team ahead.

Then the Eagles couldn't get off the ground, the Bulldogs couldn't bite, as the shooting went cold.

The Bulldogs took their final lead of the game in the second quarter, 17-15 on a 3. The Eagles went nearly three and a half minutes into the second quarter during a shooting drought that Ware ended. Thomas followed with back-to-back jumpers to help her team go on a 6-0 run and regain the lead.

With both teams hitting a few from beyond the arc to end the second quarter, Flagstaff got the last big cheer of the first half when Emma Doskicz connected for a 3-pointer.

"It's good to be deep, and we have the mentality of flush, fix and forget," Johnson said.

With the tourney win, the Eagles moved to a 7-0 record after starting regular-season play off with two wins. Thomas stood out throughout the entire tournament as a huge asset for the Eagles, but Johnson and Goodwill both said that the chemistry of the team is what has been keeping them in the win column.

"We gotta be one team, we can't be a bunch of individuals, and everybody has to understand that some nights it might be your night, but other nights it's one of your teammate's nights. It should always be our night," Johnson said.

Thanks to teamwork, Goodwill said, the team is always ready to make adjustments at the break.

After beating Chino of California handily, 65-36, to start the day with an 8 a.m. tip-off, Flagstaff ran into an early meeting with its city rival.

Taking a 16-2 lead in the opening six minutes, Flagstaff never trailed Coconino on en route to its finals bid.

An 11-2 run by the Panthers cut the lead to 18-13 early in the second quarter. After Coconino failed to hit a field goal through the game's first 6:30, JJ Nakai broke the dry spell with a long jump shot to start the run. Nakai scored seven of her game-high 22 points during the run, hitting a 3-pointer late in the first and putting in a pair of free throws to start the second.

However, the Panthers pressure in the backcourt prevented Nakai from the same success she had early in the tournament with a high-tempo offense.

"With a crosstown rivalry and JJ playing for us in AAU, we know each other," Johnson said. "We know we can't let JJ just go from A to B and make a play for herself or a teammate."

Nakai hit a 3-pointer early in the third quarter, but Flagstaff answered with back-to-back baskets by Thomas. Having missed time in the middle of the game due to foul trouble, Thomas still finished with 16 points to finish just behind Ware's team-high 17 against the Panthers.

Ware answered a 3-pointer by Coconino's Jada Golding with a 3-point play after a layup. The Panthers never could draw any closer the remainder of the game.

"We are a different team when Noni is on the floor," Johnson said. "That's shown early on this season."

Sun Sports Editor Cody Bashore contributed to this story. Mike Hartman can be reached at 556-2255 or at mhartman@azdailysun.com.

Hot Or Not: Justin Fields will be next rookie QB to get first career win?

Nearly a dozen teams in each of the boys and girls divisions competed in the annual 3-day Pepsi Holiday Tournament at Flagstaff High School. T…

Flagstaff High School’s Monique Ware (4) runs alongside a Winslow player during the final game of the Pepsi Holiday Tournament Saturday.

Flagstaff High School’s Mikaela Kayaani-Lee (44) moves for the basket during game action against Coconino at the Pepsi Holiday Tournament Saturday.

The Flagstaff Eagles pose with the first-place trophy after beating the Winslow Bulldogs in the Pepsi Holiday Tournament finals on Saturday.

Flagstaff High School’s Reece Honanie (50) moves for the basket during game action against Coconino at the Pepsi Holiday Tournament Saturday.

Flagstaff High School’s Audreana Hernandez (21) shoots for three during the final game of the Pepsi Holiday Tournament against Winslow Saturday.

Flagstaff High School’s Nizhoni Thomas (14) passes the ball during the final game of the Pepsi Holiday Tournament against Winslow.