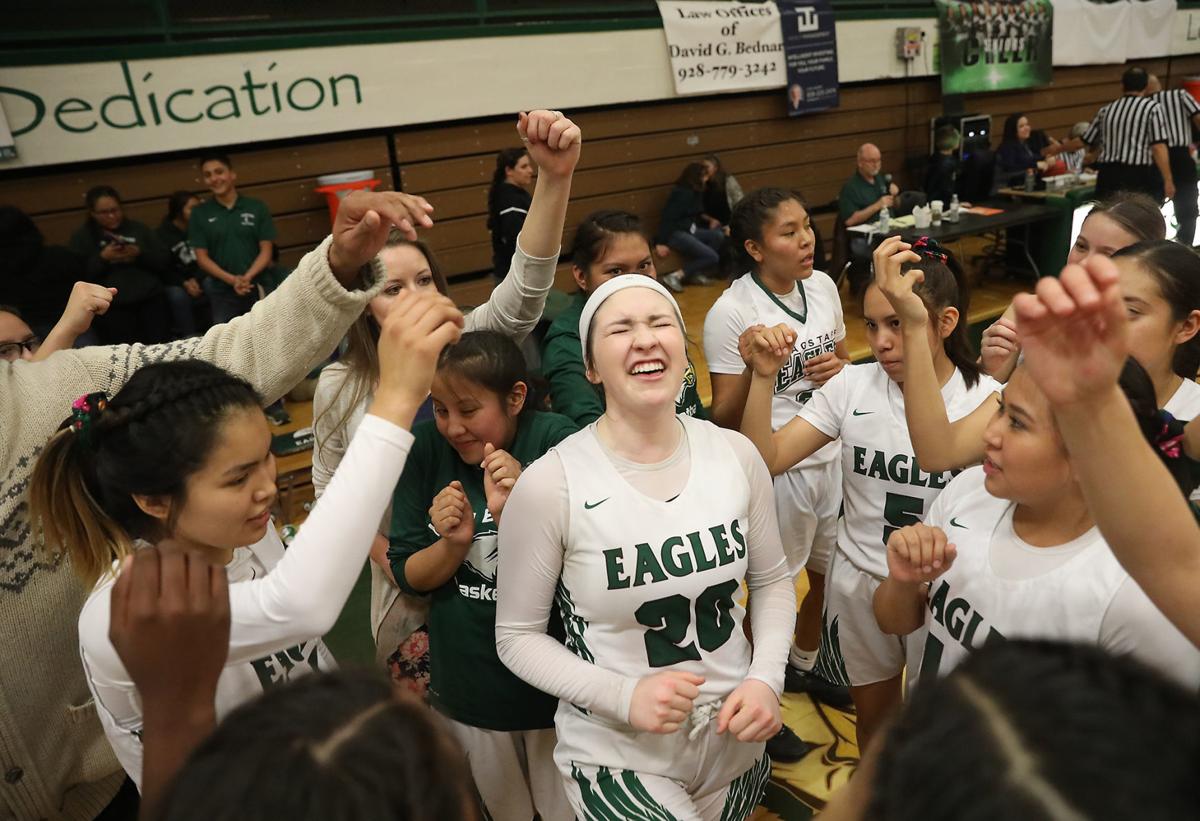 Flagstaff’s Emma Doskicz (20) is surrounded by her teammates as they celebrate a 51-39 home win over Rio Rico this season at Flagstaff High School.

When Emma Doskicz was a freshman, she emulated her older, more experienced varsity teammates such as Monique Ware, Mikala Begoody and Noni Thomas, hoping one day she too could be a role model for young Flagstaff basketball players.

Doskicz wound up being just one of a handful of seniors on the Eagles girls hoops team this winter, finding herself as a leader for a young, inexperienced roster that had promise just waiting to blossom under the right guidance. The shooting guard registered one of her best seasons for the Eagles to help the team reach the state tournament semifinals, all the while acting as a standard-bearer.

A four-year varsity player for Johnson, Doskicz came to the program with a jump shot that stood out and led to a quick start to a high school career. She finished the 2019-20 season with the second-highest scoring output for the Eagles at 11.5 points per game when including games played outside the AIA power-points schedule. It was the highest scoring average for a single season for the sharpshooter, who finished her senior year as the state's second-best producer from behind the arc.

Doskicz helped guide the young Eagles to a Grand Canyon Region title, a trip to the 4A Conference state tourney semis and an impressive 16-3 power-points record. For her ability to help inexperienced players learn to play together and accelerate their growth process, Doskicz has been named the 2020 Arizona Daily Sun Girls Basketball Athlete of the Year.

Doskicz said her motivation to be a better basketball player for the Eagles started the minute she saw how much of an impact a senior can make on a young player.

“I aspired to be like them," Doskicz said of looking up to former players such as Ware and Thomas. "So I think being on the team my freshman year gave me a drive to want to be like them that I probably would not have gotten if I was not on the same team with them.”

Doskicz played a team-high average of 23 minutes per game for the Eagles this season. Johnson said those minutes were earned, not given.

And more than ever during her varsity career, she made opposing teams respect what she was doing on the court. Doskicz, always a threat from 3-point range, said she felt she was able to put all her skill sets “into play this year."

Her coach agreed, saying the things she started working on her freshman year and beyond started to take shape on the court.

“She could go get the ball, she could bring it up, she could defer to people when they were getting rolling. She was always ready to make teams pay," Johnson said of Doskicz's overall game coming to fruition her senior year.

Doskicz finished 2019-20 with the fourth-highest player efficiency rating in the 4A Conference and made her way onto the All-Conference Second Team. Teammates Gracelyn Nez, a sophomore, and Miya Verse, a freshman, joined her on the list for the most Eagles on the second team since Ware and Thomas made second-team roll call in 2017.

"As people watched, I am quite sure people saw her growth from her freshman to her senior year,” Johnson said.

There was growth in the classroom as well, as Doskicz registered her first-ever straight-A semester during her senior year.

She said part of the reason she did well this season on the court was because of players such as Nez and Verse proving their strong games. But she said she always has found a way to thrive in Johnson's system.

“He has a very specific way of coaching that I like a lot," Doskicz said.

Johnson said he's already witnessed how Doskicz will have a long-lasting impact on the Eagles that played under her wing this season, another reason he enjoyed having her for so many years.

For Doskicz, it's been a chance to bring it all full circle.

“I enjoyed learning how to give my skills to the girls so that they can use it for years to come," she said.

At various times in his football career, Stacy Chukwumezie has turned to a simple, well-known phrase as he continued to push forward.

Flagstaff’s Emma Doskicz (20) is surrounded by her teammates as they celebrate a 51-39 home win over Rio Rico this season at Flagstaff High School.