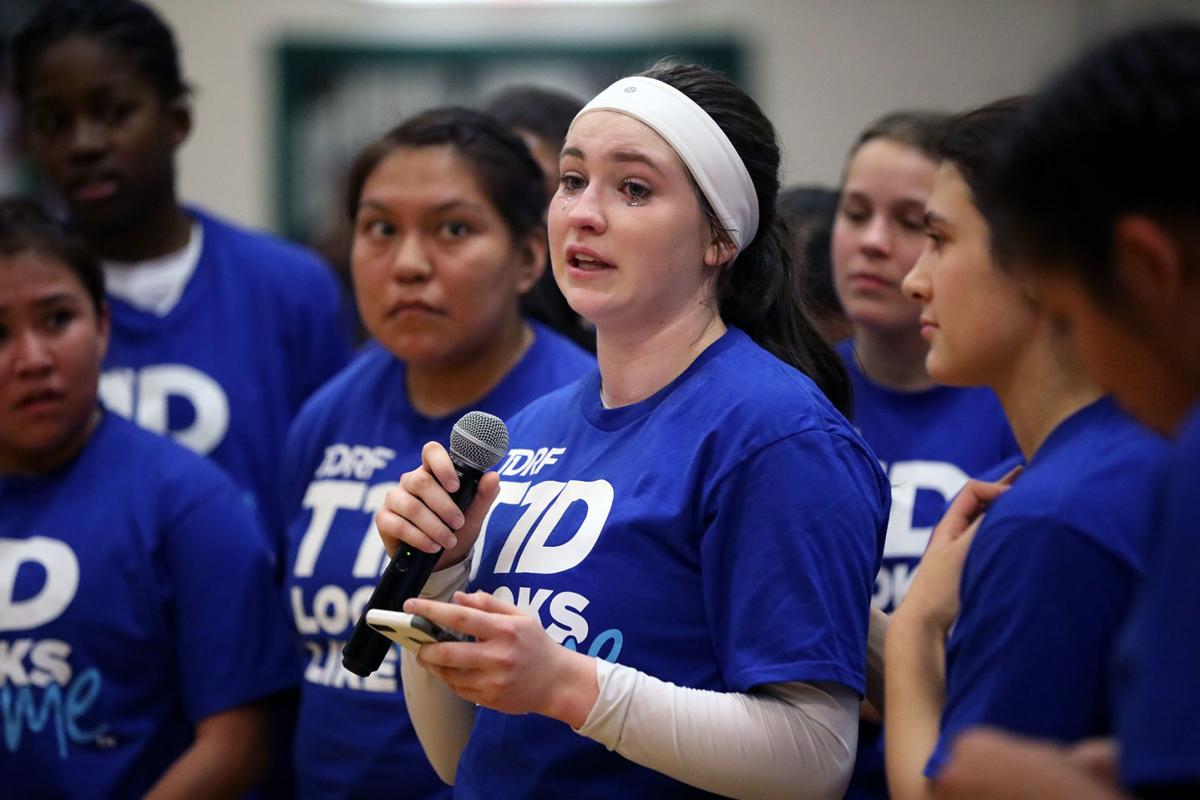 Surrounded by her teammates and speaking while battling tears, Flagstaff’s Emma Doskicz, center, puts a face to Type 1 diabetes during halftime of Flagstaff's home game against Coconino in front of a packed War Memorial Gym. In front of her classmates and fans, Doskicz talked about overcoming the stigma of Type 1 diabetes and the assumptions surrounding the condition. 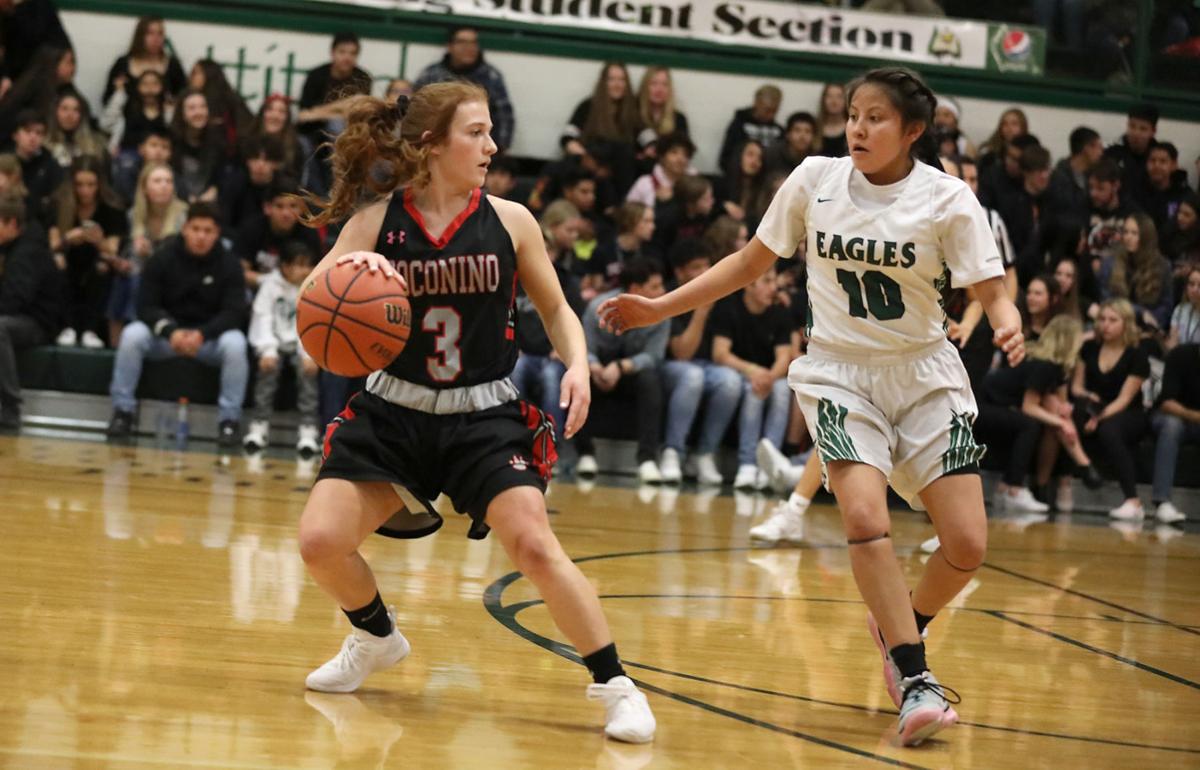 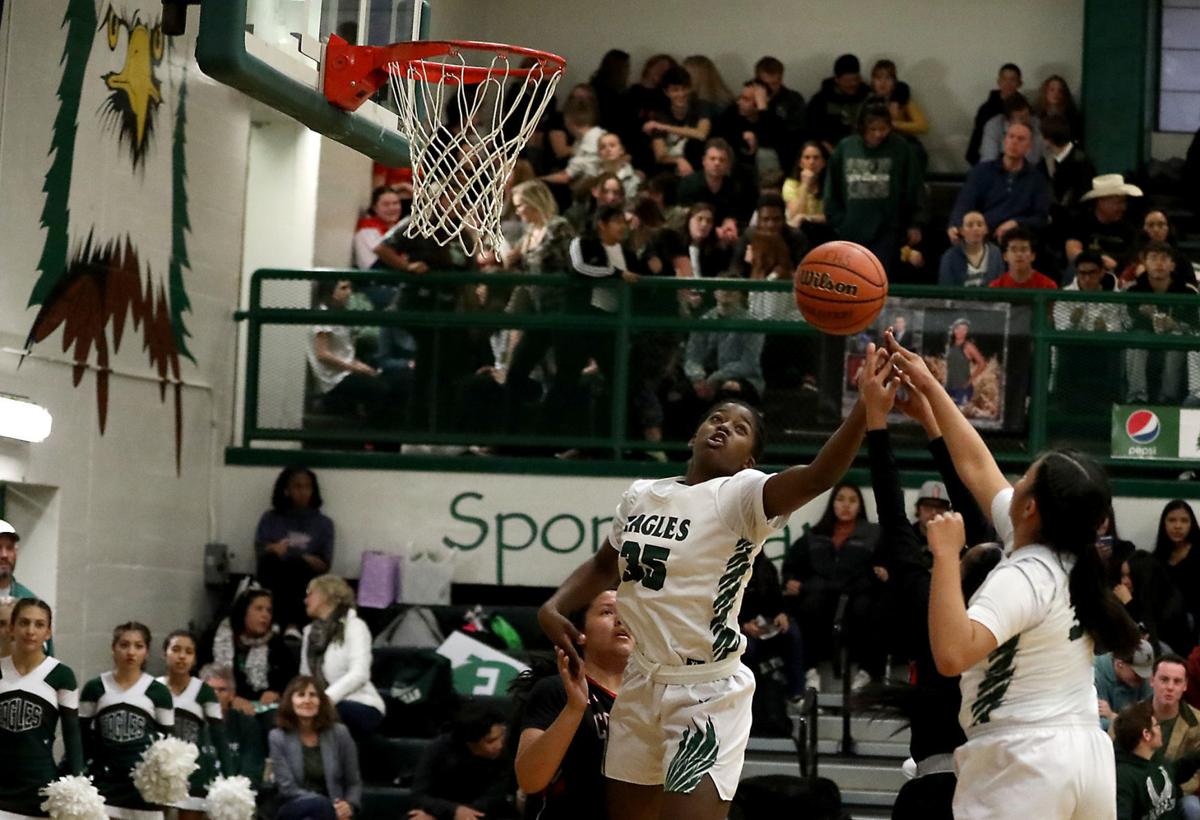 Flagstaff’s Miyah Verse (35) fights for the rebound Tuesday night during a game against Coconino at Flagstaff High School. 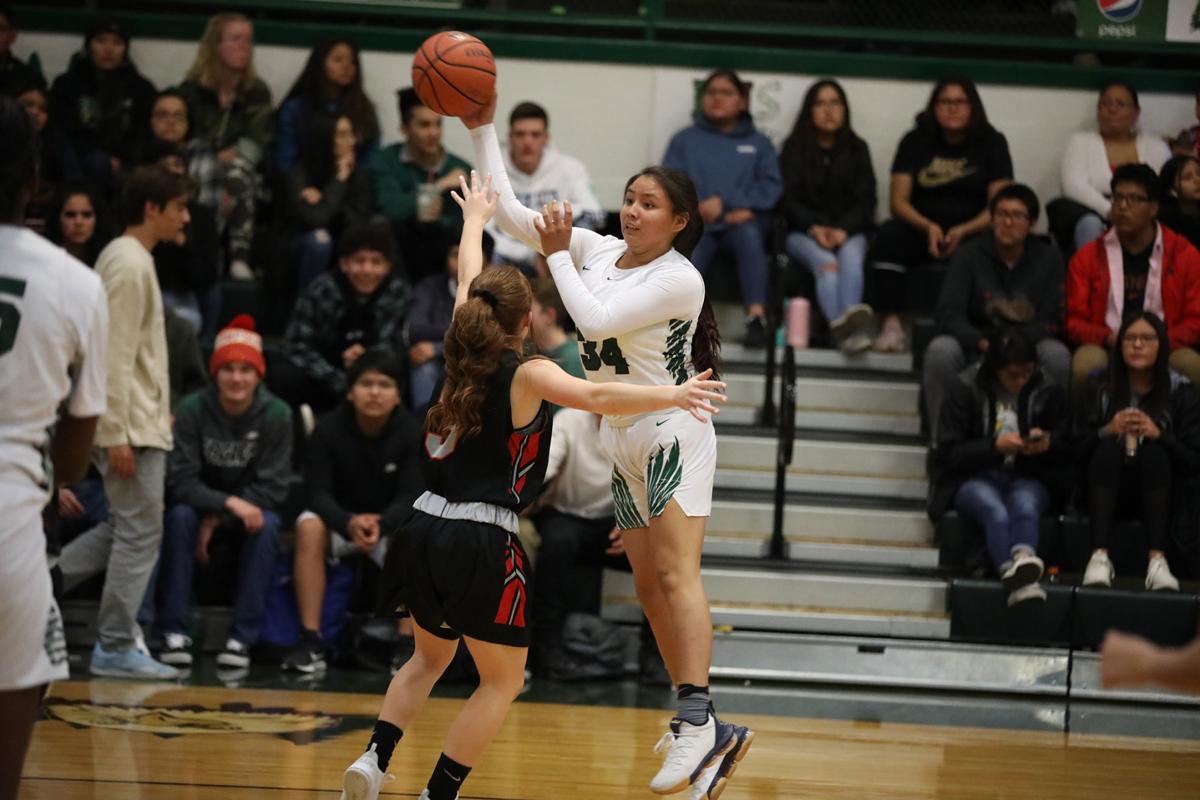 Flagstaff Eagles guard Emma Doskicz fought back tears so she could make her halftime speech. She and her teammates and coaches were wearing blue, but not because they were feeling that way.

The Eagles senior finished with six points, drilling a couple 3-pointers, but made a louder statement than usual in Tuesday's victory during the half.

Doskicz, who has been living with Type 1 diabetes since she was 5 years old, addressed a packed crowd in Flagstaff's War Memorial Gymnasium about the condition in an effort to bring awareness to others. As she spoke to the crowd, her teammates and coaches huddled around her and donned the message "TD1 Looks Like Me" on blue shirts, signifying the color of the blue circle that is the universal symbol for diabetes.

“It was a lot for me," Doskicz said of making the speech. "It’s hard for me to talk about it a lot of the time. But I think things like that are very important because I don’t want to have to be upset to talk about it, and I think it’s because people make assumptions about people who have diabetes and I want to change that. So nights like tonight are super important.”

Eagles head coach Tyrone Johnson said her desire to do more with her high school basketball career shows how much Doskicz, a four-year varsity player and sharpshooter from the perimeter, has matured over the years.

“To see her muster up the courage to get out there and speak in front of a crowd like this, I am proud of her," Johnson said. "At first you still hear some murmuring, but once she really got into her speech the crowd was in-tune, they were silent, respectful and I think they heard the message, and I think she did a great job of articulating it.”

And the Eagles continued to make a statement on the court as well, sweeping their crosstown rivals, the Coconino Panthers, 48-28, at home to complete the regular-season schedule on an 11-game win streak. With the victory, Flagstaff for a third straight season went undefeated in the Grand Canyon Region.

Johnson said Doskicz is a perfect example of the bigger picture when it comes to the Flagstaff girls basketball program, noting how she came in willing to be led only to become an eventual leader for the Eagles, who finished the year at 16-3 overall to go with a 12-0 region mark.

"The team respects her, the coaches respect her; she doesn’t come out and do it for herself. She wants to be the first finishing in the sprint, and she wants to lead the right way in the classroom and when she’s off the court," Johnson said. "When you have that, it trickles down the program, and all of a sudden it makes it easy to hold people accountable.”

Heading into Tuesday's regular-season finale, Doskicz was averaging her team's second-highest point total at 12.1 per game. The team's leading scorer, Miyah Verse, was at 12.8 points per game.

Verse, a freshman, finished with a game-high 14 points for Flagstaff, which entered the night at No. 5 in the 4A Conference power rankings. Gracelyn Nez added six for the Eagles, who handed the 12th-ranked Panthers (14-5, 10-2 Grand Canyon) a second straight loss to their season.

The Eagles got on the board first when upperclassmen Devynn Hatathlie, getting the rare start, hit a 3-pointer to spark Senior Night, and Flagstaff never trailed the rest of the way.

Elyce Palmer had nine points, all coming in the first half, for the Panthers, who used a 6-0 run and the end of the half to cut the lead to 21-14 at the break. The hosts, however, took control in the third, outscoring the visiting Panthers 20-3 in the period.

“I think that we have improved a lot, but we have a long way to go in the sense that we regress sometimes," Johnson said of his team heading into the postseason.

While the Eagles are set to receive a bye for the 4A's play-in round, the Panthers will wait to see who they potentially host, if they stay in the top 16 of the rankings.

The play-in round is set for Thursday at 7 p.m. at the high seed.

Finishing their perfect run through the Grand Canyon Region, the Flagstaff Eagles topped the Coconino Panthers 48-28 in their home gym Tuesday night.

Surrounded by her teammates and speaking while battling tears, Flagstaff’s Emma Doskicz, center, puts a face to Type 1 diabetes during halftime of Flagstaff's home game against Coconino in front of a packed War Memorial Gym. In front of her classmates and fans, Doskicz talked about overcoming the stigma of Type 1 diabetes and the assumptions surrounding the condition.

Flagstaff’s Miyah Verse (35) fights for the rebound Tuesday night during a game against Coconino at Flagstaff High School.