Coronavirus update: How the Catholic Church won $1.4B in virus aid; Starbucks to require masks

Flagstaff Eagles looking to use speed, altitude against bigger Glendale
0 comments
Share this
Return to homepage × 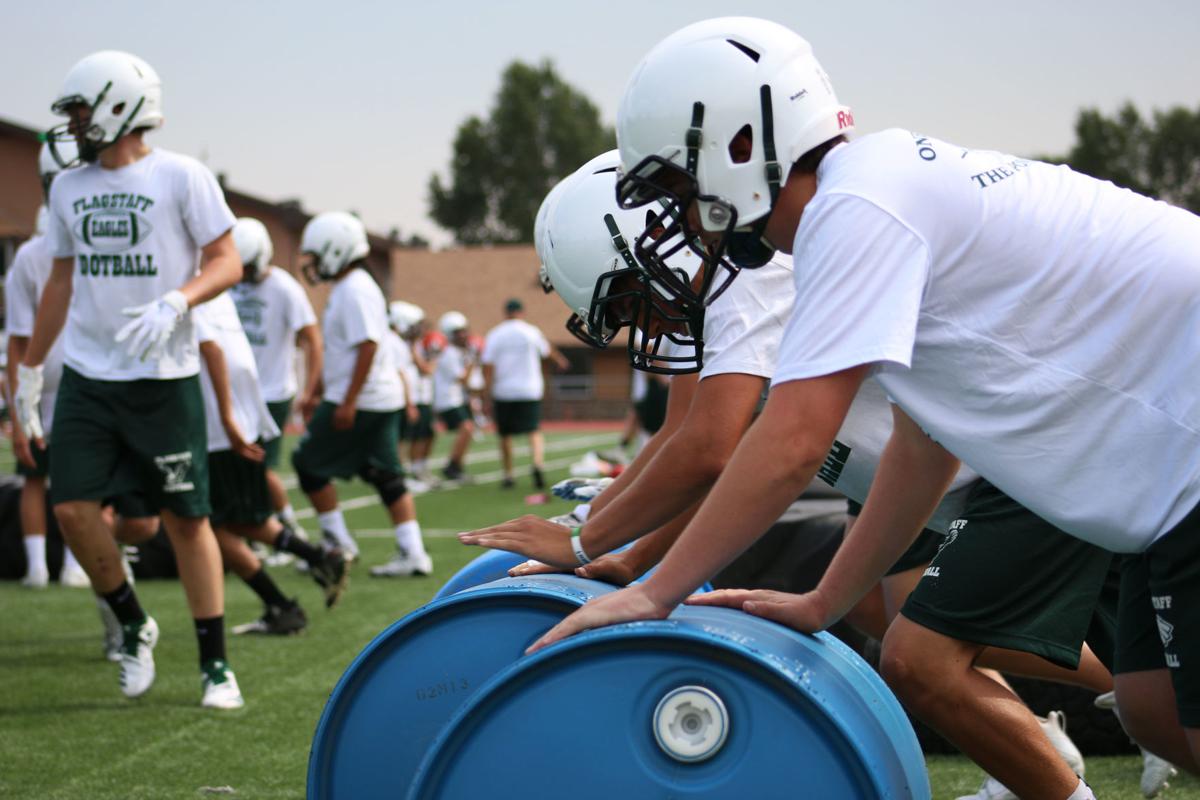 Members of the Flagstaff Eagles football team roll barrels during a practice at Flagstaff High School.

High school football has started and the Flagstaff Eagles open their season with a home match against an opponent they last faced 10 years ago.

On Friday, Flagstaff will square off against Glendale of the 5A Conference in the Walkup Skydome. In the previous match-up in 2008 between the teams, Glendale took the win at home 10-9.

Last season the Cardinals went 8-2 overall and 4-1 in the Union Region, finishing second in the section and missing qualifying for the 5A state playoffs due to a low strength of schedule of minus 23.8, which placed the team at 29th in the conference.

It's the first time in recent memory that 4A Flagstaff has played a 5A school or higher, and Eagles co-head coach Bob Castillo said getting a chance to go up against a school of Glendale’s caliber will be good for his team.

“Because of their success, I thought it was to our advantage to play a good team to open the season,” Castillo said.

Glendale had one of the top running attacks in the region in 2017, with 294.7 yards per game gained on the ground a major part of the high-powered offense that scored at least 34 points in all 10 of its games. Their leading rusher from last season graduated, but the Cardinals return TJ Owens, a dual-threat quarterback who gained 730 total yards on the ground and 1,552 through the air.

Protecting that rushing attack is an offensive line that averages nearly 250-plus pounds -- which may pose a challenge for Flagstaff on Friday.

“They definitely have an advantage size-wise over us,” Castillo said. “We’ve told our guys that we just have to work hard and get after them, take advantage of the altitude, and use our speed and quickness.”

For the Eagles, their ground attack will take center stage, as the team will look to its stable of senior running backs in Joshua Morrow and Josh Thomas to carry the load offensively and give quarterback Henry Tagle chances when needed to make plays downfield.

With the size of the Glendale defensive line, which boasts similar size to the O-line, Castillo said the Eagles will need to get through the rushing holes quickly to find their scoring chances.

The Eagles and Cardinals are tentatively scheduled for a 7 p.m. kickoff in the Skydome, but there is a chance of a later start because of games happening throughout the day in the venue.

The day starts with Fredonia versus Duncan at 10 a.m., Phoenix Christian versus Needles at 1 p.m., and it ends with Page versus Florence at 4 p.m., followed by Flagstaff versus Glendale.

For the past few weeks, flooding brought by monsoon rains continued to be a problem for much of the city, but the consequences of dry summer m…

Members of the Flagstaff Eagles football team roll barrels during a practice at Flagstaff High School.