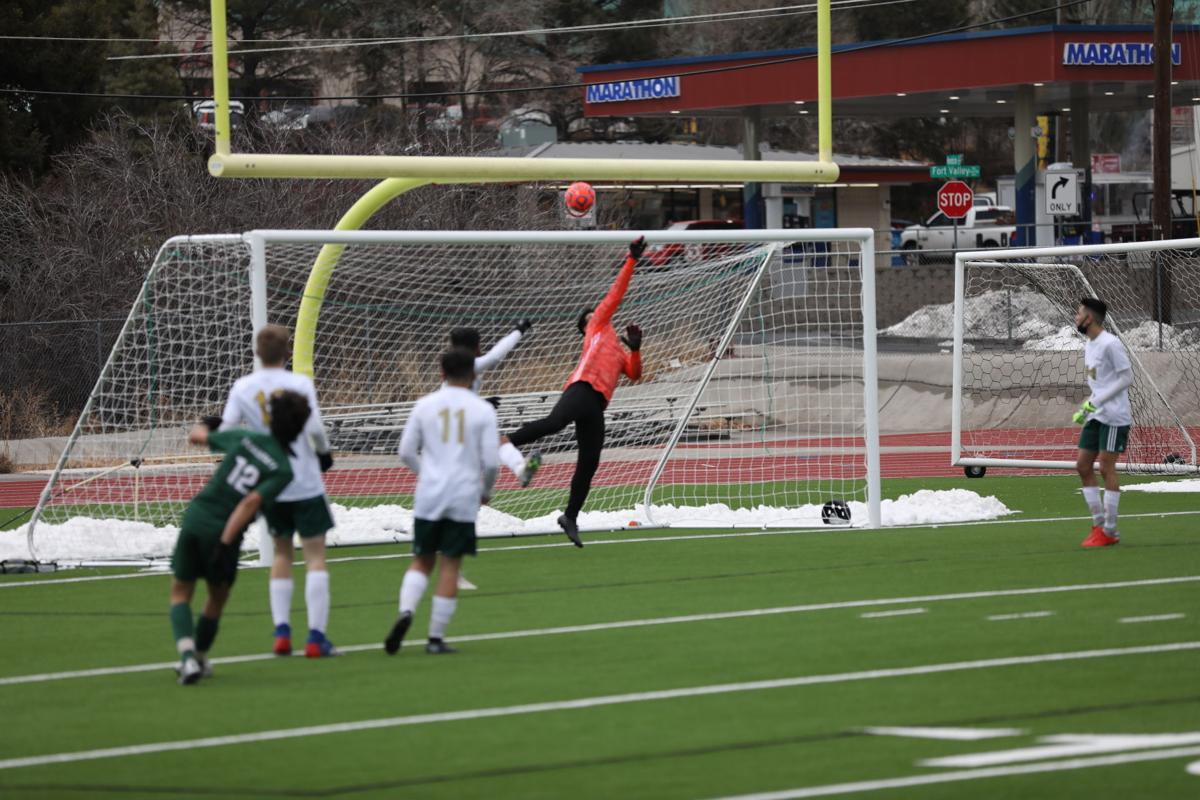 A Flagstaff shot is tipped by the Mohave goalkeeper during the first half of Friday's match at Flagstaff High School. 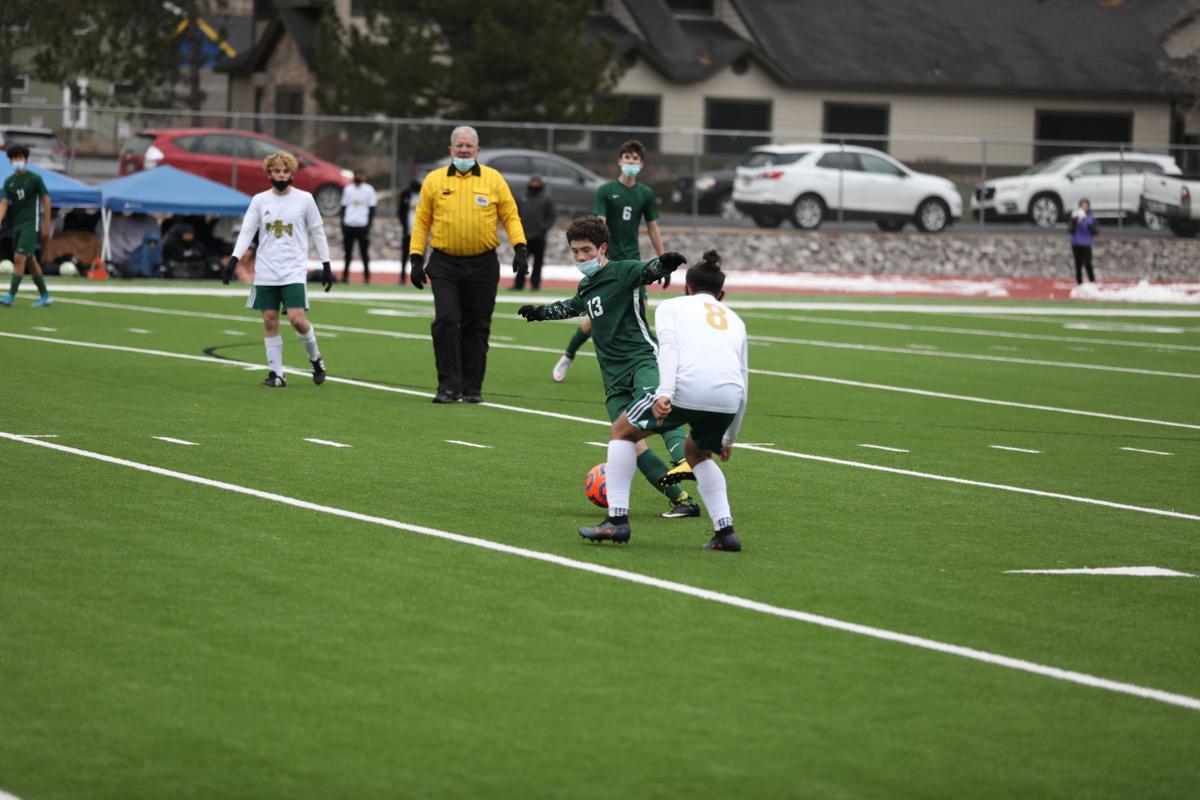 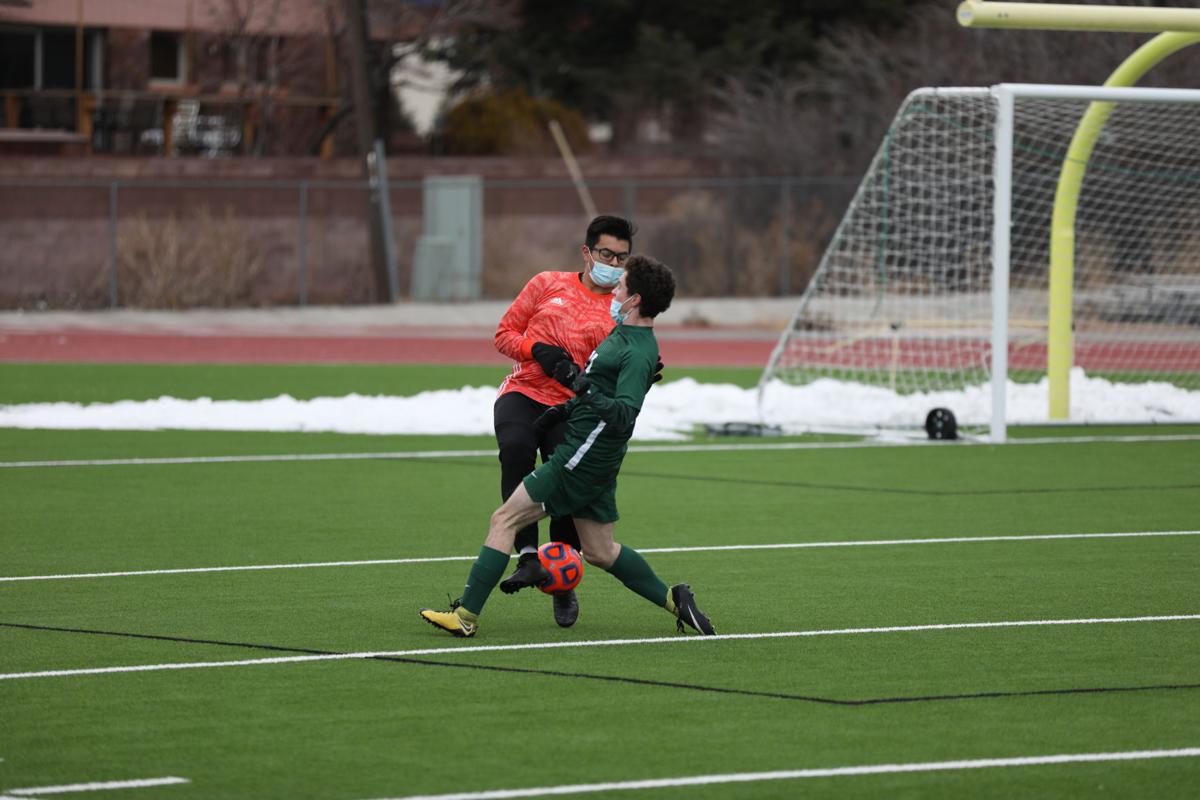 Flagstaff's Leo Thull, front, collides with the Mohave goalkeeper Friday during the first half at Flagstaff High School. 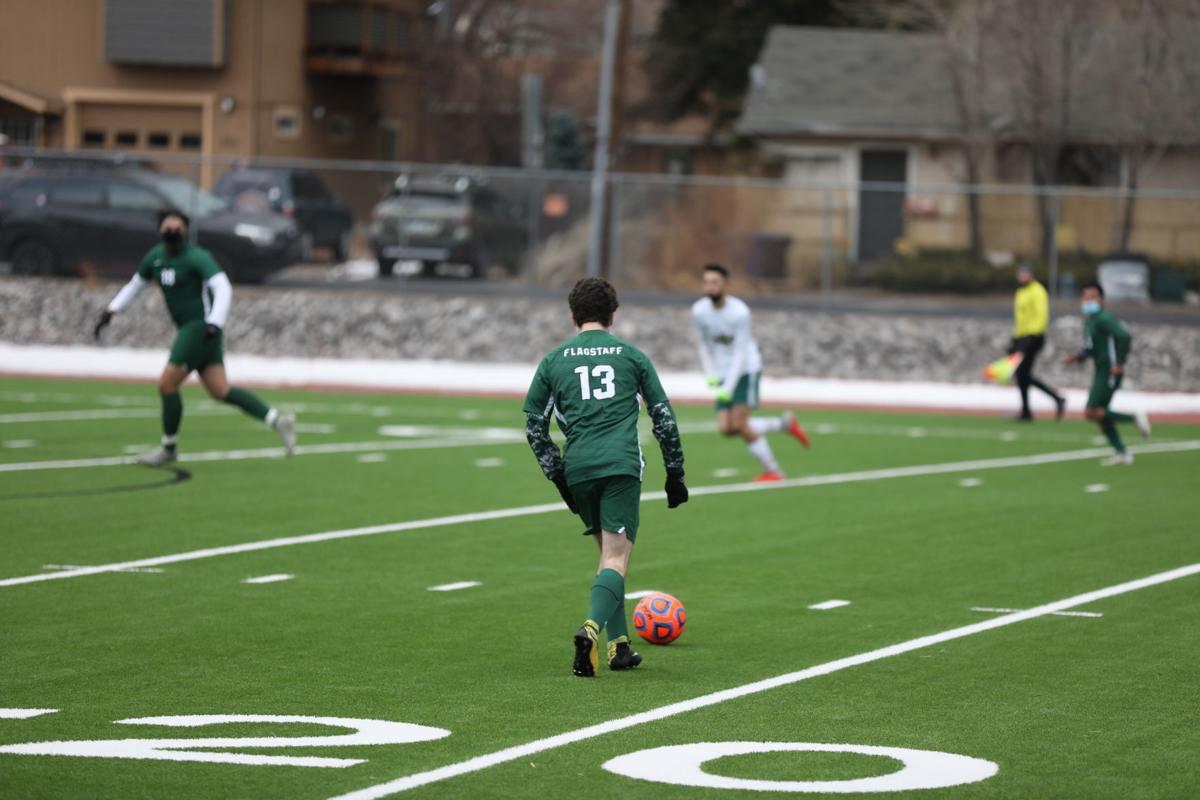 With the players masked up for COVID-19 protocols, and bundled up to battle the cold and wet weather, the Flagstaff Eagles boys soccer team opened its season.

The Eagles were able to control the time of possession early and hardly gave it up to the Mohave Thunderbirds much at all, leaving little room to work as Flagstaff put win No. 1 on the board, 5-1, at Flagstaff High School.

The 4A Eagles came out with a slow pace in the first half Friday, waiting for their openings to put shots on goal and set up opportunities to capitalize on the lackluster Thunderbird defense.

An early scare for the Eagles was when Leo Thull was in a hard collision with the Mohave goalkeeper in the first half, but Thull was only on the sideline for a small amount of time and was able to continue the match. Flagstaff struck first blood in the match, as Ahmed Sanchez set up a perfect pass to Benett Olson-Zwick, who scored with a line-drive kick that sailed over the keeper's hands.

It was the lone score of the first 40 minutes as Flagstaff played great defense in the Grand Canyon Region meeting with Mohave, not allowing for easy shots at the net and clearing the ball with intensity and precision.

As soon as the second half began, the scoring really opened up for the Eagles. Jonathan Alvarez added to the board with a goal of his own after one minute of play. Olsen-Zwick started taking over the game, scoring two more goals at the 22-minute mark and 10-minute mark respectively to give him a season-opening hat trick. Mohave was not able to help themselves, as their keeper made a crucial error by slipping on the wet turf and allowing the ball to get past him and roll into the goal.

Mohave was able to keep the game from becoming a shutout, as they were able to get on the board with a penalty kick goal late.

Eagles head coach Mike Jenkins was thrilled after the match.

“Just to get the first game out of the way feels great, we didn’t even know if we were gonna have a season with how things have been going so far.” Jenkins said. “These kids have been playing against each other since October, so they were ready to play and we were really excited about that.”

Jenkins mentioned how lucky he feels to have his team out on the field given the past two weeks and changes to the season.

“We’re just really fortunate, fortunate that the boys can play and fortunate that we can get them out of their houses.” Jenkins said. “I told them this could all be taken away the very next day, so every chance we get to walk out onto the field is a joy.”

The Eagles will have a chance to get some rest, as they will hit the road next week to take on Lee Williams Wednesday.

Make it two in a row to start the season for 4A Flagstaff.

The Eagles cruised to a win at home Friday night and is now scheduled to travel to Bullhead City to take on Mohave (1-1, 1-1 Grand Canyon) Wednesday at 7 p.m.

Northland Pre suffered its first loss of the season, struggling to get much going offensively against the Glendale Prep Griffins Friday night. The 2A Spartans (1-1, 1-1 Central) are scheduled to play Chino Valley on Monday at home.

The 4A Flagstaff Eagles were in a tight one Friday night.

In their season opener, the Eagles escaped from Cottonwood with a win at Mingus Union to open the season 1-0. Nick Sneezy had 20 to lead the Eagles while Brandon Foster had nine points and Nick Morrow had seven points

Flagstaff will host Mohave Tuesday at 7 p.m. at the War Memorial Gymnasium.

The new season opened with a tough one for 2A Northland Prep in a loss in the Valley. The 0-1 Spartans host Chino Valley Monday.

The 1A Basis Yeti opened the season up with a win, beating Ash Fork at home. The Yeti will hit the road to take on Williams on Tuesday.

Coconino opened the season with a shutou loss to Prescott at home Friday. The 4A Panthers (0-1, 0-1 Grand Canyon) are scheduled to host 3A Page on Saturday -- weather permitting due to the incoming winter storm that will likely hit Flagstaff.

The Daily Sun Sports Staff contributed to this roundup.

NAZ Elite is spending time in Scottsdale for a team retreat, running in warm weather, getting in some bonding and kicking off the year with it…

A Flagstaff shot is tipped by the Mohave goalkeeper during the first half of Friday's match at Flagstaff High School.

Flagstaff's Leo Thull, front, collides with the Mohave goalkeeper Friday during the first half at Flagstaff High School.