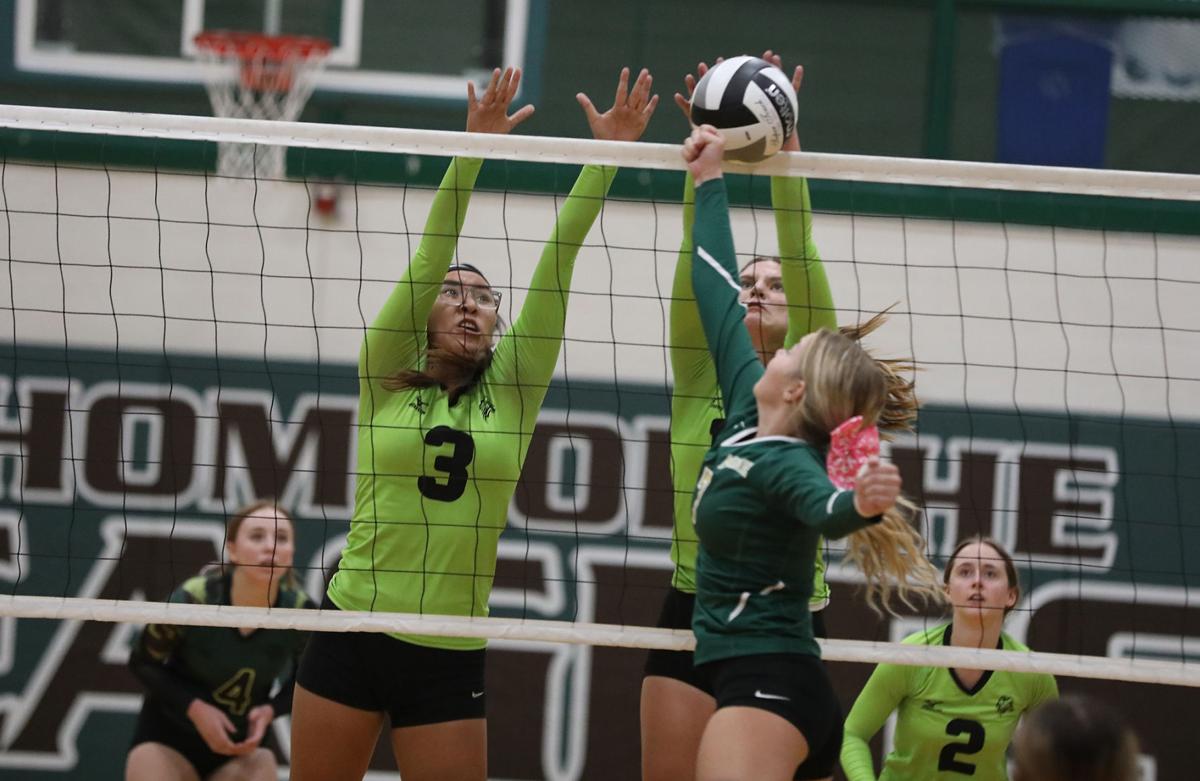 Flagstaff’s Alyssa Williams (3) and Ainsley Thomas (10) block the tip from a Mohave player Tuesday night during a home match in the War Memorial Gymnasium. 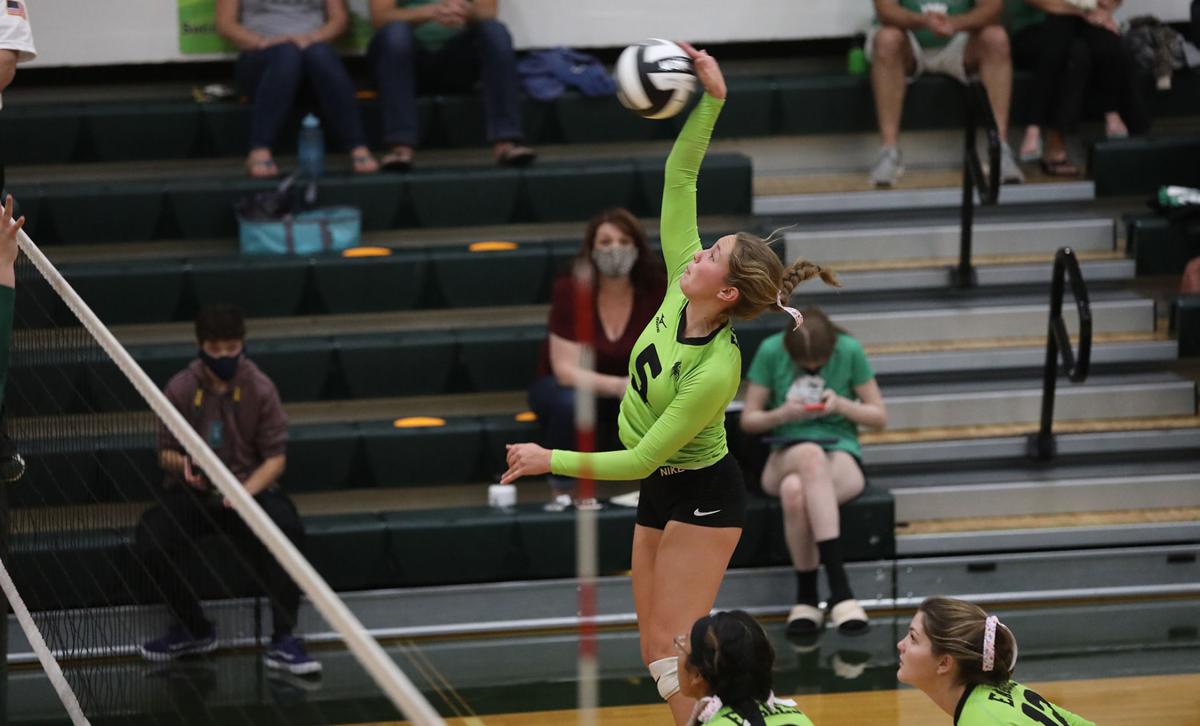 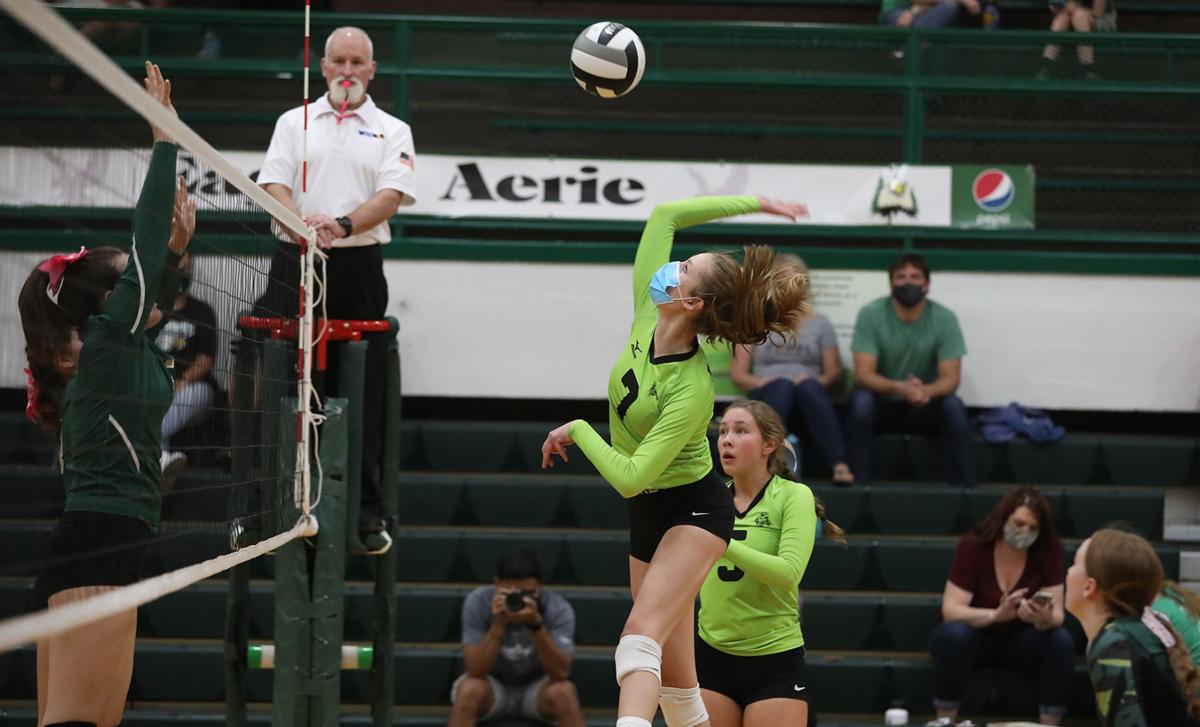 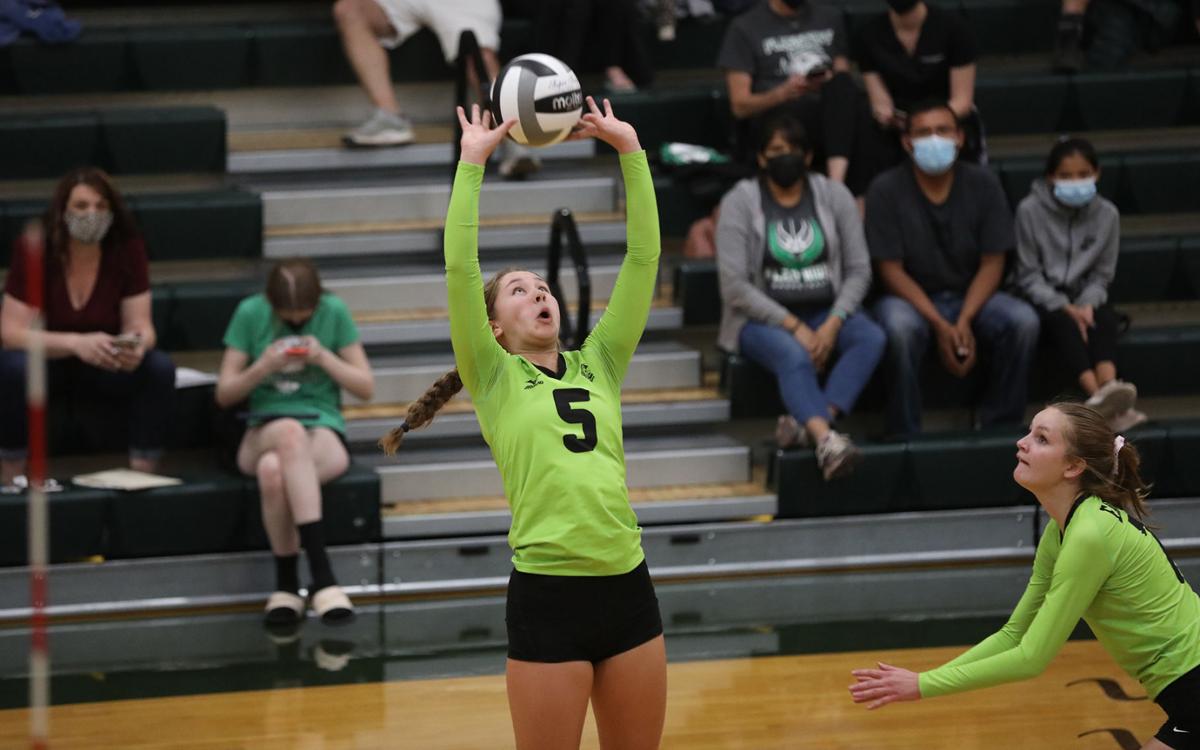 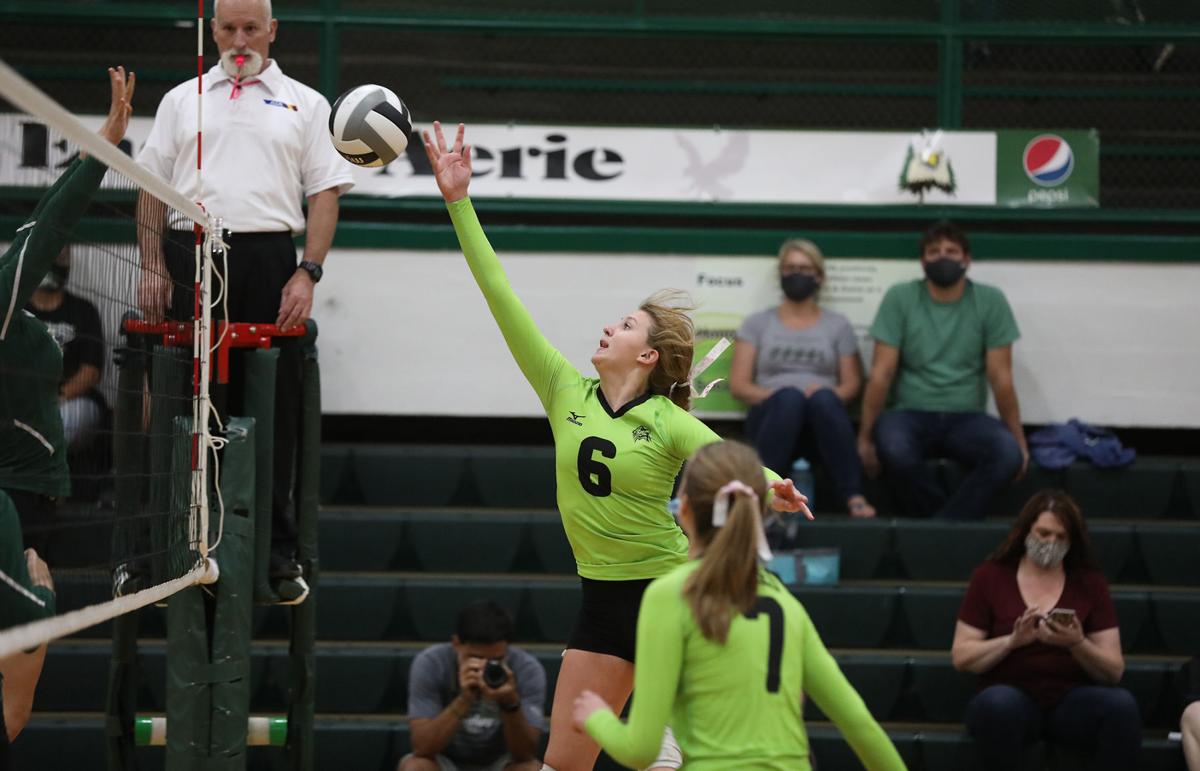 Flagstaff’s Haylee Gilleland (6) tips the ball during a home match against Mohave Tuesday night in the War Memorial Gymnasium.

Make it five straight wins to start the season for the Flagstaff Eagles volleyball team after a sweep over Mohave, 3-0, at the War Memorial Gymnasium Tuesday night.

The Eagles, ranked fourth in the 4A Conference as of Tuesday's rankings, on paper routed the visiting 24th-ranked Thunderbirds 25-13, 25-9, 25-18. But longtime Eagles head coach Beth Haglin, who is always looking for ways her team can improve after and during each match, was quick to point out some things to work on at practice.

But there is some context to the wild passing or inconsistency, Haglin noted. The Eagles played without two starters, star outside hitter Gracelyn Nez due to injury suffered against Mingus Union last week and No. 1 middle blocker Berlynn Fowler for personal reasons.

"That's the key thing," Haglin said, "everyone is playing different roles. We had worked Ainsley (Thomas) on the right side and she was getting very comfortable on the right side and doing a great job setting up a really good block over there. ... My No. 1 middle is out and my No. 1 outside is out, so it makes everyone else have to adjust. The thing that is nice about this team is we have a lot of depth and we can move people around. When we practice, we practice in a variety of positions."

Haglin joked that earlier in her coaching career she would get too mad about mistakes in matches that she would almost gloss over that her team still got the win.

With the noted scratches to the Eagles rotation, some were forced to play out of their normal spots. Instead of being able to work off the attention Nez gets on a consistent basis, Thomas was the focal point of the offense for the most part.

She finished with a team-high five kills and added four digs, and was a solid presence at the net with three block assists and one solo block. Bridget Bond had 13 assists, one kill, one solo block and two digs in a solid match from her setter spot.

Lauren Hagerman got some extended playing time as well and had four kills, one dig, three solo blocks and four block assists for the Eagles. Cassidy Berry led the Eagles with 17 digs.

While Haglin noted the things she wants to see improved, the Eagles were never really in doubt of winning Tuesday night's match.

The closest Mohave got in the opening set was an early 7-6 Eagles lead before Flagstaff outscored the Thunderbirds 18-7 the rest of the way. The second set was much of the same. Flagstaff held a close 8-5 lead before rattling off a 17-4 run to close and hold Mohave under 10 points for the second.

The third set ended a bit closer than the rest, due in part to the Eagles putting in some reserves to get extra match reps. The Thunderbirds trailed just 11-8 before the Eagles extended the lead to 16-9 -- holding the seven-point cushion for a 25-18 match winner.

Anyone around high school sports can see how weird the various seasons are right now due to the ongoing pandemic. But for Haglin, a recent loss and family challenges have added to the rough season.

"We have had a rough season from the standpoint of leadership, and when I say leadership I say my leadership," Haglin said. "My mother passed away a week ago and my daughter just went into pre-term labor and had her baby at 32 weeks. We've just had a lot of things, and it's been pretty rough and the kids have had to deal with a lot of adversity."

Haglin noted the weirdness with online learning for some of her athletes and the uncertainty with each week and the looming possibility of matches being canceled like Coconino has faced.

"It's like whoever stays mentally strong is the one who is going to prevail," Haglin said. "Especially in this season, it really has kids on edge. ... From that standpoint, everyone is a little bit off."

Through it all, Haglin praised her coaches for picking things up and her athletes for responding to the challenges thrown at them. As for herself, Haglin wants to give her team all she can.

"It's just plowing through," Haglin said.

Flagstaff’s Alyssa Williams (3) and Ainsley Thomas (10) block the tip from a Mohave player Tuesday night during a home match in the War Memorial Gymnasium.

Flagstaff’s Haylee Gilleland (6) tips the ball during a home match against Mohave Tuesday night in the War Memorial Gymnasium.