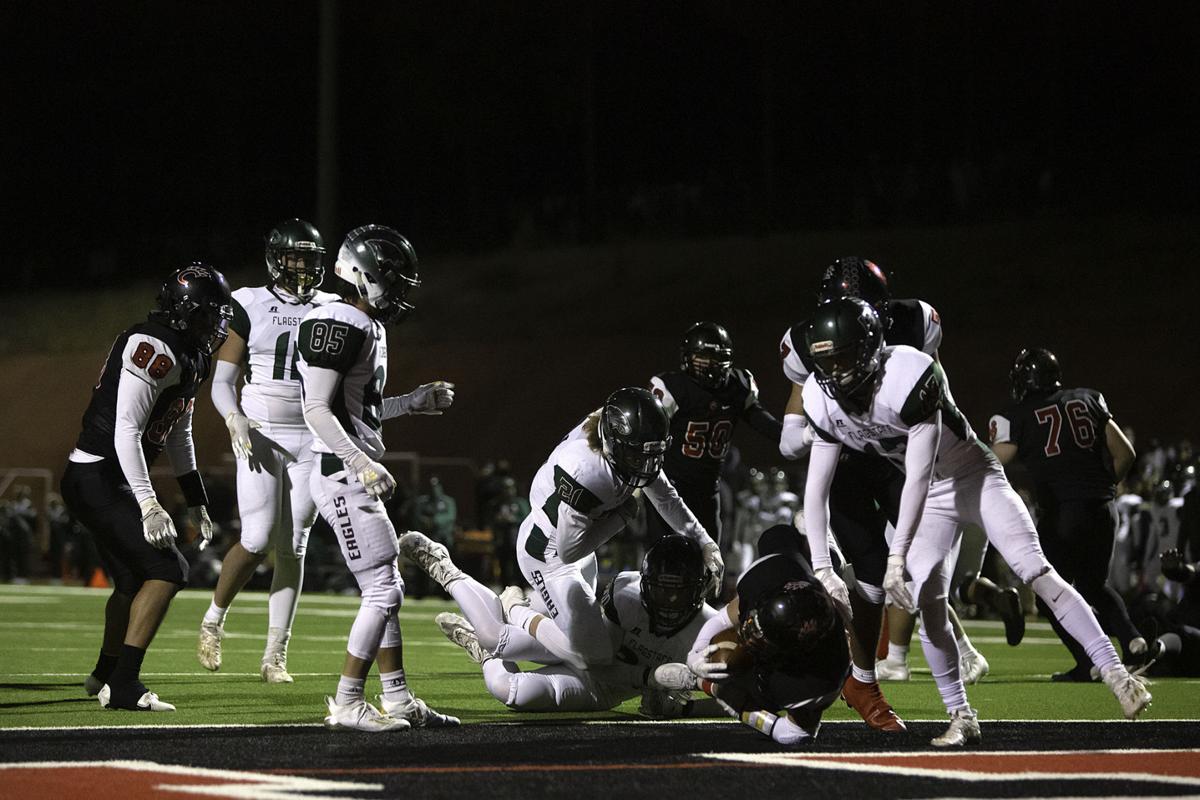 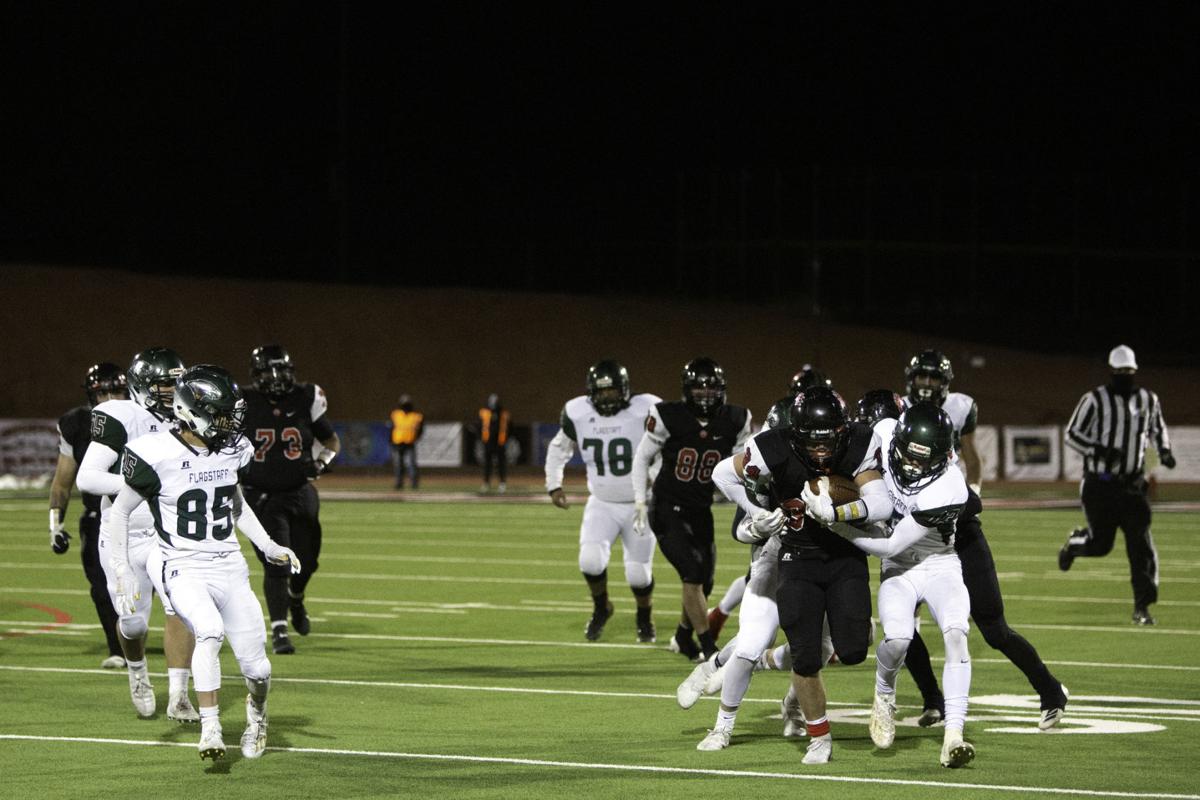 Coconino's Zach Bennett attempts to break tackles during a game against Flagstaff Friday at Cromer Stadium on the Coconino High School campus. 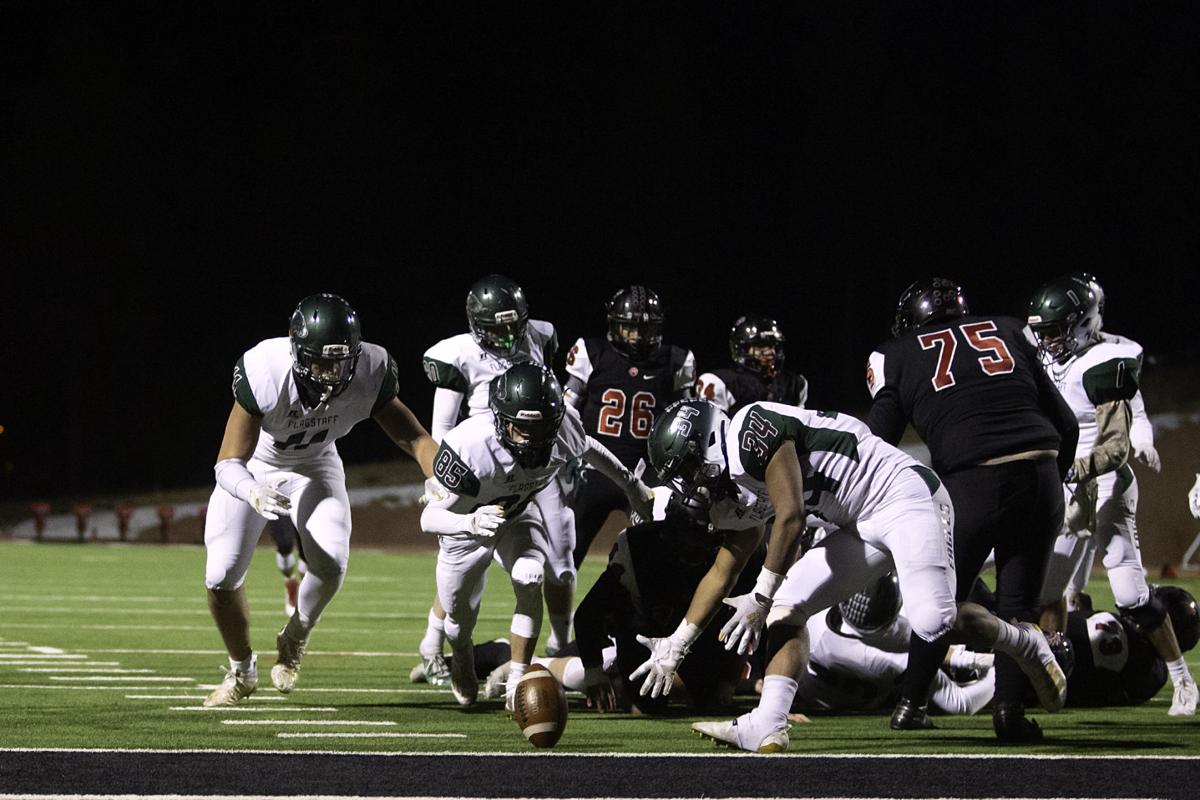 Flagstaff's Luis Jaramillo attempts to scoop up a fumble during a crosstown rivalry game against Coconino Friday in Cromer Stadium. 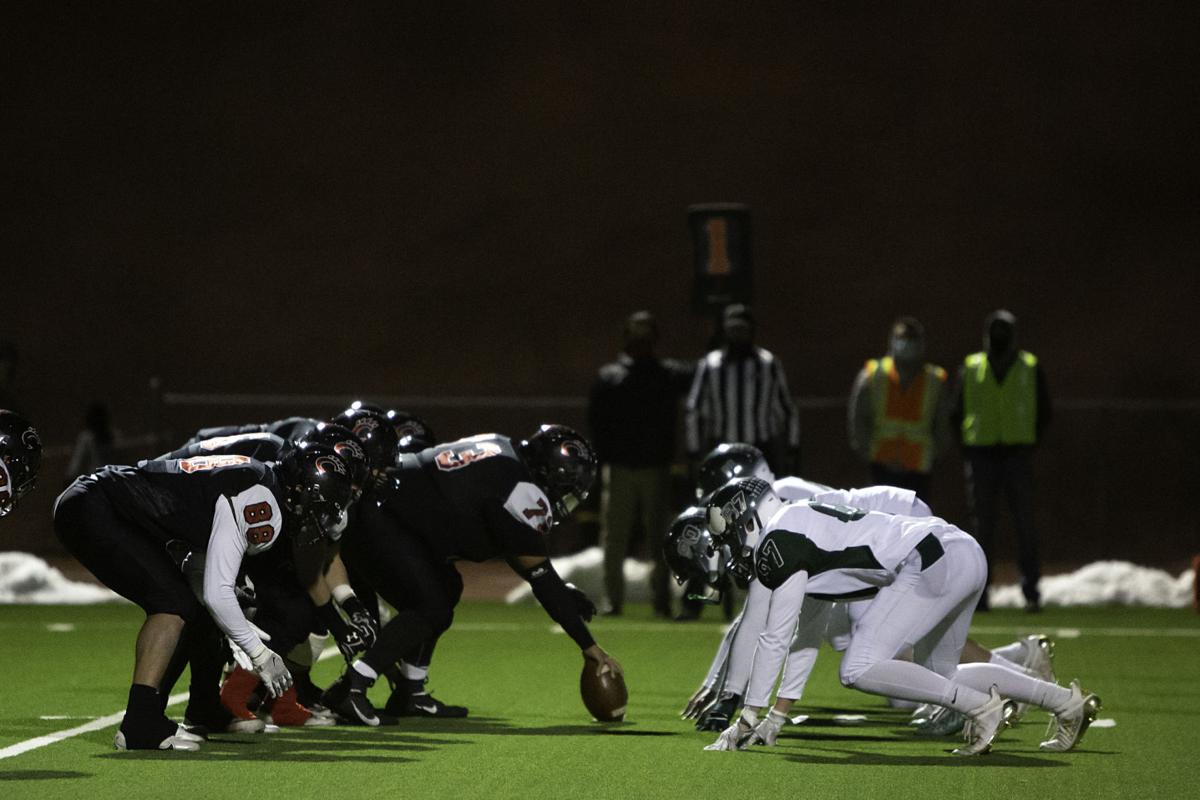 Coconino's offense prepares to snap the ball Friday during the crosstown rivalry game against Flagstaff at Cromer Stadium. 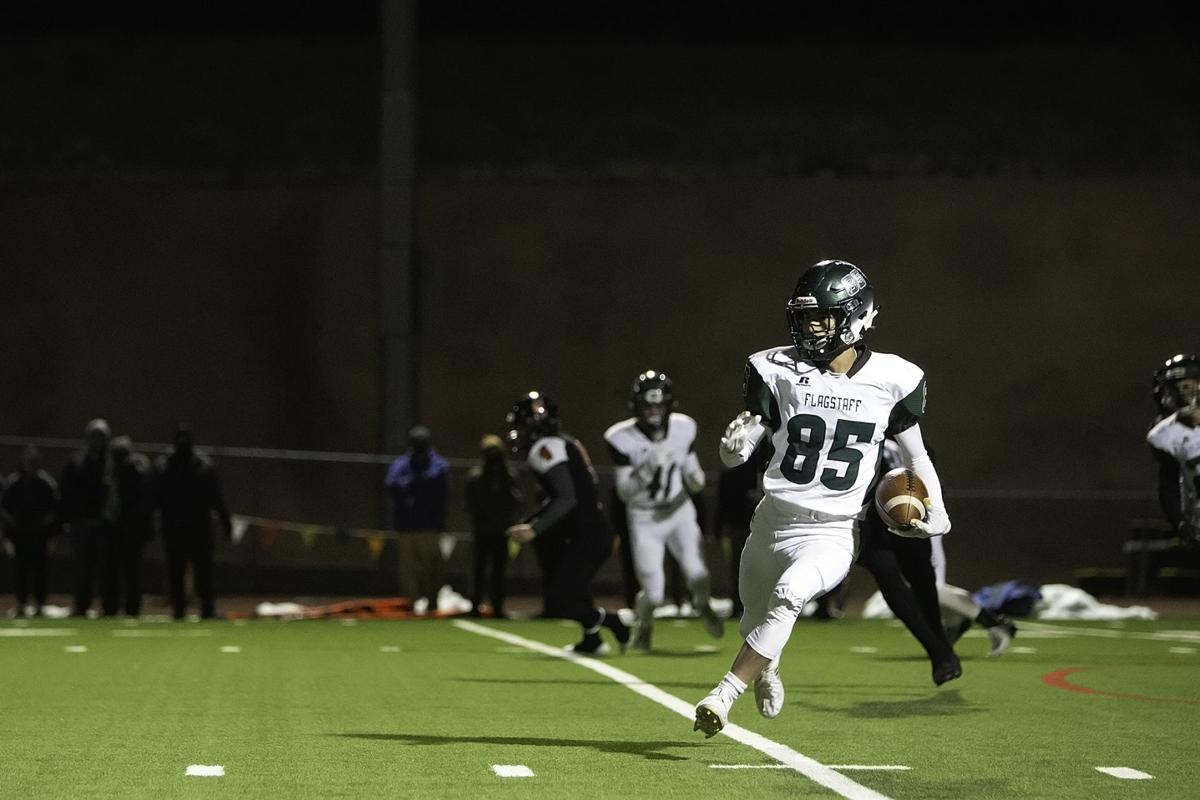 Flagstaff's Jace Wetzel (85) moves up the field with the ball Friday during the crosstown rivalry game against Coconino at Cromer Stadium on the Coconino High School campus.

There were added stakes, a bit more excitement even with the low-capacity crowd at this year's crosstown football game.

But, staying true with the past three years, the same team came out on top.

The No. 4 Coconino Panthers won the city title for the fourth season in a row over the 11th-ranked Flagstaff Eagles, 28-7, Friday night at Cromer Stadium. Panthers star running back Zach Bennett rushed for 165 yards on 29 carries as he was responsible for all four of Coconino's scores in the big rivalry win.

The Panthers stay spotless at 7-0 overall and 6-0 in the 4A Grand Canyon while Flagstaff falls to 4-3 overall and 4-2 in the region.

With the win, the Panthers have now won back-to-back region titles for the first time in program history and have clinched their first undefeated regular season since 1983. The last time the Panthers took back-to-back region crowns the Grand Canyon Region wasn't around, as the school won two straight Class AA North Division titles in 1982 and '83.

This year also marked the first time ever Coconino has won four straight over Flagstaff.

Following the win, the Panthers took the region trophy yet again and enjoyed the fourth consecutive win as a team. Even with his mask on, you could tell Panthers head coach Mike Lapsley was all smiles as his team finished the regular season unscathed.

"I'm enjoying the moment right now," Lapsley said. "Football is a long season, a lot of grinding, so I'm just taking a moment to smell the roses right now. So very proud of these young men. They have worked incredibly hard all year."

Now, the Panthers, ranked high in the 4A, and the Eagles, near the bubble of a playoff berth yet again, await for the 4A playoff bracket to be revealed.

"Hats off to them, they were just physical up front. It's a tough offense to mimic in practice, and I thought our kids played really hard. I didn't see anyone give up or anything like that," Eagles head coach Todd Hanley said. "That's always positive when you see some fight."

It was all ground game for the Panthers.

While others got their yards, there wasn't much of a question if any other player would make their mark in a game with so much anticipation and with so much on the line other than Bennett.

Bennett did his thing, keeping the Panthers offense going with chunk gain after chunk gain. The record-breaking running back averaged 5.7 yards per rush as he was the workhorse once again for the Panthers.

He even completed an 11-yard pass to teammate Tyson Fousel to set himself up for a short touchdown run with just 30 seconds left in the second quarter -- a score that put the Panthers up 21-7 just before halftime.

As a team the Panthers ran for 432 yards while allowing just 162 yards defensively. Manuel Cardoza added in 89 yards rushing, Fousel had 71 and Pierson Watson contributed 55 for a committee attack.

The Panthers held Eagles star back Luis Jaramillo scoreless, but he still went for a tough 131 yards on 20 carries. It seemed like each time Jaramillo got space, there were Panthers defenders there to keep him from breaking a long run.

Jaramillo nearly had a long TD score after busting loose for 28 yards up field, but the ball just popped out of Jaramillo's hands near the end of the first quarter.

Coconino pounced on it but on the ensuing drive fumbled at the goal line as Jaramillo picked it up. In all for the game there were five fumbles -- two by Flagstaff and three by Coconino -- that were all recovered by the defense.

Flagstaff's only score of the night came off a fumble by Bennett at the Flagstaff 47 that was recovered by Flagstaff's Marcus Salcido at the 5:48 mark of the second quarter.

While Flagstaff actually won the turnover battle with just two to Coconino's three, the Eagles offense struggled all game to get off the ground -- literally.

The Flagstaff passing game was grounded as quarterback Morgan Bewley went just 9-of-16 passing for 49 yards. The offense had just eight first downs -- two via the pass and six via the run -- to Coconino's 26.

Early in the fourth quarter near the eight-minute mark, trailing big by three scores, Flagstaff had a chance to make things interesting inside Coconino territory.

Flagstaff had chances, but couldn't get past the Coconino defense. On a fourth-and-sixth pass attempt, Bewley couldn't find his target in the Coconino end zone.

On the ensuing drive Coconino essentially milked the rest of the time off the clock to walk out of Cromer with the home win.

Following the game Jaramillo was awarded his second straight outstanding Eagle award, and Cardoza earned the honor for Coconino.

The 4A play-in round for the state tournament is scheduled for next Friday. The top 16 teams from the 4A will play with the high seed hosting. If Flagstaff sneaks in, there is a small chance Coconino and Flagstaff could meet again this season in the playoffs.

Coconino's Zach Bennett attempts to break tackles during a game against Flagstaff Friday at Cromer Stadium on the Coconino High School campus.

Flagstaff's Luis Jaramillo attempts to scoop up a fumble during a crosstown rivalry game against Coconino Friday in Cromer Stadium.

Coconino's offense prepares to snap the ball Friday during the crosstown rivalry game against Flagstaff at Cromer Stadium.

Flagstaff's Jace Wetzel (85) moves up the field with the ball Friday during the crosstown rivalry game against Coconino at Cromer Stadium on the Coconino High School campus.