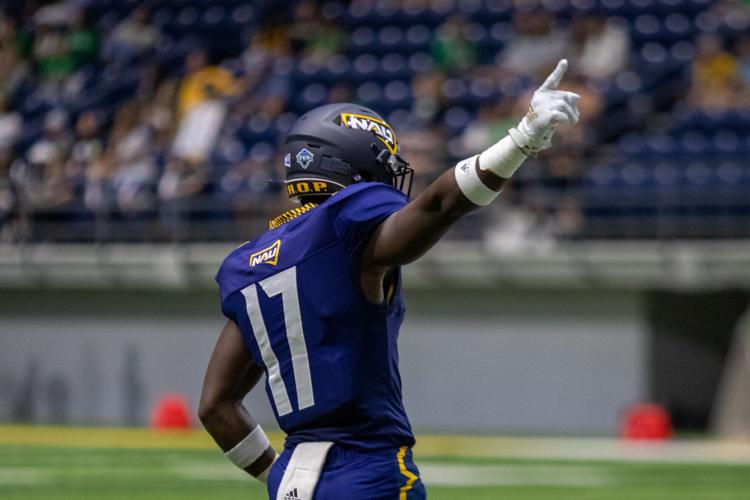 Northern Arizona Lumberjacks cornerback LJ DAvis celebrates a defensive play during a game against North Dakota at the Walkup Skydome on Saturday, Sept. 17. 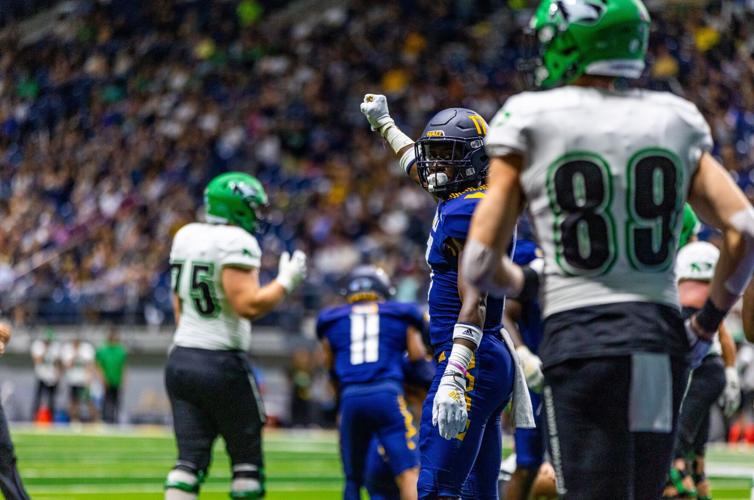 LJ Davis is preparing for another Big Sky Conference football season. This year, though, it’s in a new uniform.

The redshirt senior transferred to Northern Arizona in the offseason and immediately became an impact player, starting at cornerback from the beginning of the year. Coming from Southern Utah, a former member of the Big Sky that Northern Arizona played several times in the past few years, he was already familiar with the Lumberjacks and the culture of football in Flagstaff.

“Coming into this dome was always a special place to play in, because you never know how it’s going to feel. And playing in the elevation ... you can feel it. And I know a lot of these dudes already from high school or college, so it felt like I was close with them already when I got here,” Davis said.

He’s already had success in the conference, including land on the All-Big Sky Second Team in the spring 2021 season.

“It’s kind of weird being in a new place and stuff,” he said, chuckling, “but I’m playing against the same teams as before, so I kind of know what to expect. It’s been really fun.”

It was experience, albeit on the other sideline, that made coach Chris Ball and the Lumberjacks want to bring Davis into the program.

At times over the past few seasons, he gave Northern Arizona receivers fits trying to get past and around him. When Davis’ name popped up as a potential transfer, several Lumberjacks put a word in that Ball should try to get him in a blue and gold jersey.

“We thought he was one of the better corners we went against. I asked (receivers) coach (Junior) Taylor, and he said we need to take him because he was tough to play against,” Ball said.

The experience has worked out well so far for both parties. In a press conference about the new signings in the spring, Ball said the Lumberjacks had to be selective with the players they brought in from the transfer portal. With more than 20 high school graduates coming in as freshmen, there was already a sizeable class of new faces, but even more the coaching staff had to be sure of the new players’ character before bringing them in from other college teams.

Not only did Davis meet the mark as a player, Ball said, but he also displayed the kind of mental strength and consistency in practice that the team wanted out of its new athletes.

Davis said he’s felt a bond with the team since his first experience with the Lumberjacks. Now things are working well in his new unit.

“When I came on my visits, they really made me feel welcome. Plus I’m not too far from home in Los Angeles,” he said. “And it’s been fun. We’ve got one of the best defenses in the Big Sky, if not the country, and everybody all gels together, so I can’t wait to see what we do throughout conference play.”

Northern Arizona’s defense gave up more points than Ball would have liked in its last meeting with Idaho, a 38-31 win in Moscow, Idaho, on Oct. 30, 2021. But the Lumberjacks made clutch plays when it mattered, including three interceptions.

Safety Morgan Vest had two of them, including a late pick that essentially sealed a close victory.

The Lumberjacks (1-2) open conference play against the Vandals on Saturday in the Walkup Skydome and will need similar production to get past Idaho.

NAU football is practicing today, getting ready for its upcoming conference opener against Idaho on Saturday pic.twitter.com/IeUShYeAT3

The Vandals (1-2) are a bit of a mystery this season, simply because of their early schedule. They don’t boast a winning record, but both of their losses have come to FBS opponents on the road, including a 24-17 defeat at Washington State and a 35-22 loss at Indiana. Their victory last Saturday came in resounding fashion, a 42-14 home victory over Drake in which they finished with 447 total yards and forced a pair of interceptions on defense.

The Lumberjacks believe the game will be a tough way to start conference competition.

Northern Arizona is looking to bounce back from a 27-24 home loss to North Dakota last week in which the Lumberjacks gave up a touchdown pass in the final minute of play to lose the lead.

Bolstering the Lumberjacks' offensive depth, receiver Stacy Chukwumezie will be suited up and ready to play. The multi-time All-Big Sky wideout suffered a leg injury early in the last season, but is now fully ready to compete and add another deep threat to the passing game.

“It's Big Sky play, every goal we have is still on the board,” Ball said.

Kickoff between the Lumberjacks and Vandals is set for Saturday at 1 p.m. in the Walkup Skydome.

I’m a runner and I have Type 1 diabetes; to me, these two things go hand in hand. I was 41 when I was diagnosed. Although most people still ca…

Flagstaff football’s last major win didn’t just serve as a special moment for this season. The Eagles hope their latest victory is a stepping …

NAU scoreless in second half, Lumberjacks fall 27-10 to Idaho in conference opener

Coach Chris Ball crumpled up the stat sheet after Saturday’s postgame press conference. He didn’t want to look at the numbers anymore.

LOCAL ROUNDUP: Yeti volleyball falls to 3A Page at home

The Basis Flagstaff Yeti volleyball team could not piece together back-to-back wins for the first time this season, falling 3-0 to Page at hom…

Northern Arizona Lumberjacks cornerback LJ DAvis celebrates a defensive play during a game against North Dakota at the Walkup Skydome on Saturday, Sept. 17.