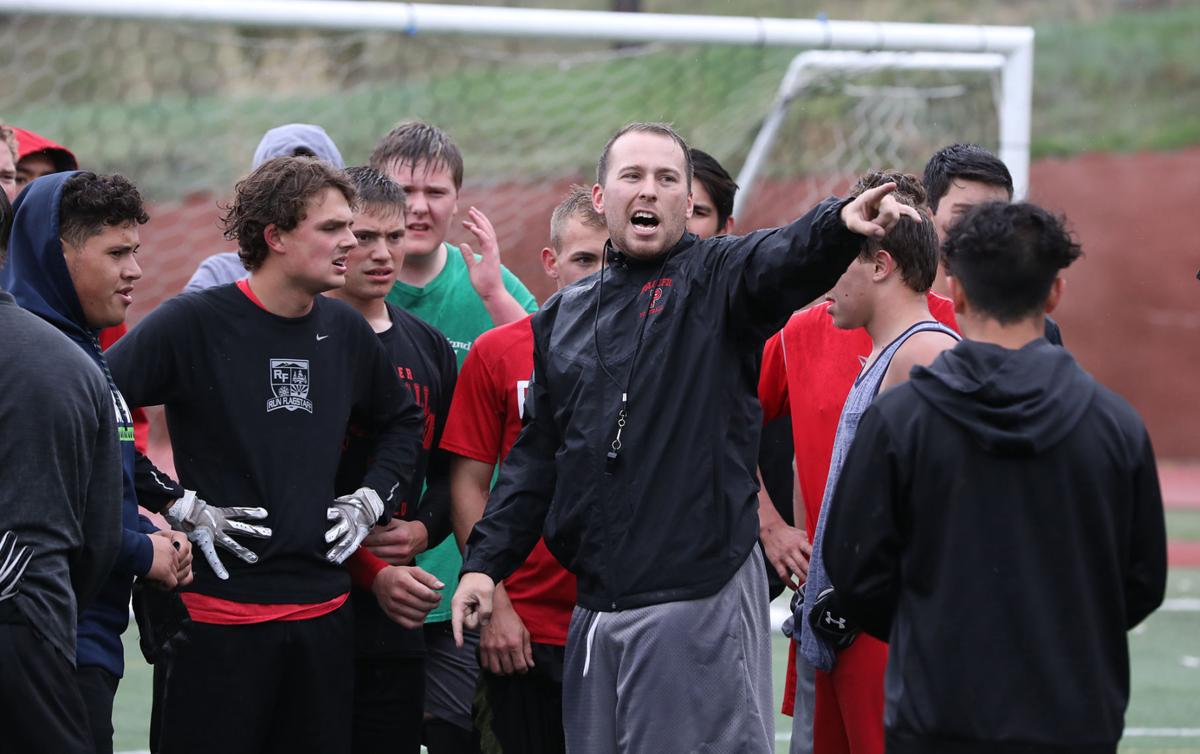 Coconino Panthers defensive coordinator Dalton Schwetz speaks with players during a spring practice in May 2019.

In an email sent out to families Tuesday, Coconino High School announced that Dalton Schwetz will take over as manager of the Panthers baseball team.

Schwetz replaces former skipper Daniel Vander Valk, who stepped down from the role in January. It is still unclear what exactly led to Vander Valk and Coconino deciding to part ways so close to the spring season.

The hire is still pending Flagstaff Unified School District board approval, despite Coconino having already announced the hiring to families.

Schwetz has been on Mike Lapsley's Panthers football staff as the defensive coordinator since Lapsley was made head coach before the 2019 season. Schwetz said during a Wednesday interview he plans to still work with the football team in addition to running the baseball program.

"I'm just excited to continue to work with these kids," Schwetz said. " ... They bought into what we did in football and we've seen the results there, so I am going continue to work with the kids and do everything I can really to help them be successful on and off the field. ... My role with football will not change. Obviously in the spring we will have to worry about schedules and things like that. But I am still all-in on football and there was no way I was going allow this to take away from that."

Although a football coach at Coconino, Schwetz described himself as a baseball guy. Baseball was his preferred sport growing up in Washington and he was supposed to play college ball at Pacific along with football before injuries kept him from getting on the diamond at that level.

He also coached football at Pacific for a short time before joining the Coconino football staff.

Coconino played just two games in the 4A Conference power-points slate -- splitting them with a 5-4 loss to Thunderbird and a 13-7 win over Lee Williams, a team that resides in the Grand Canyon Region along with the Panthers. The Panthers also played in a tournament outside the regular-season slate a year ago where they went 1-3. Coconino never got the chance to play on its home field in 2020 due to early-season weather issues and then the pandemic cancellation.

In 2019, the last full season for the Panthers, the team went 9-9 overall and lost in the 4A Conference state tournament play-in round to Catalina Foothills.

The Panthers are scheduled to open the season March 12 against Greenway and then will have their home opener March 18 against Desert Edge -- weather and pandemic permitting.

As for getting going with the season just a month away, and the uncertainty surrounding the program after Vander Valk's sudden departure, Schwetz didn't seem too concerned.

"My viewpoint is, I've seen the kids at Coconino and what they are all about," Schwetz said. "I know that the baseball guys, the basketball guys and the football guys, they are working on their craft all year round and every single day. ... I took this job for the kids. I am there completely for the kids and the student-athletes here. I am going to do everything in my power to make sure they are successful."

Coconino Panthers defensive coordinator Dalton Schwetz speaks with players during a spring practice in May 2019.