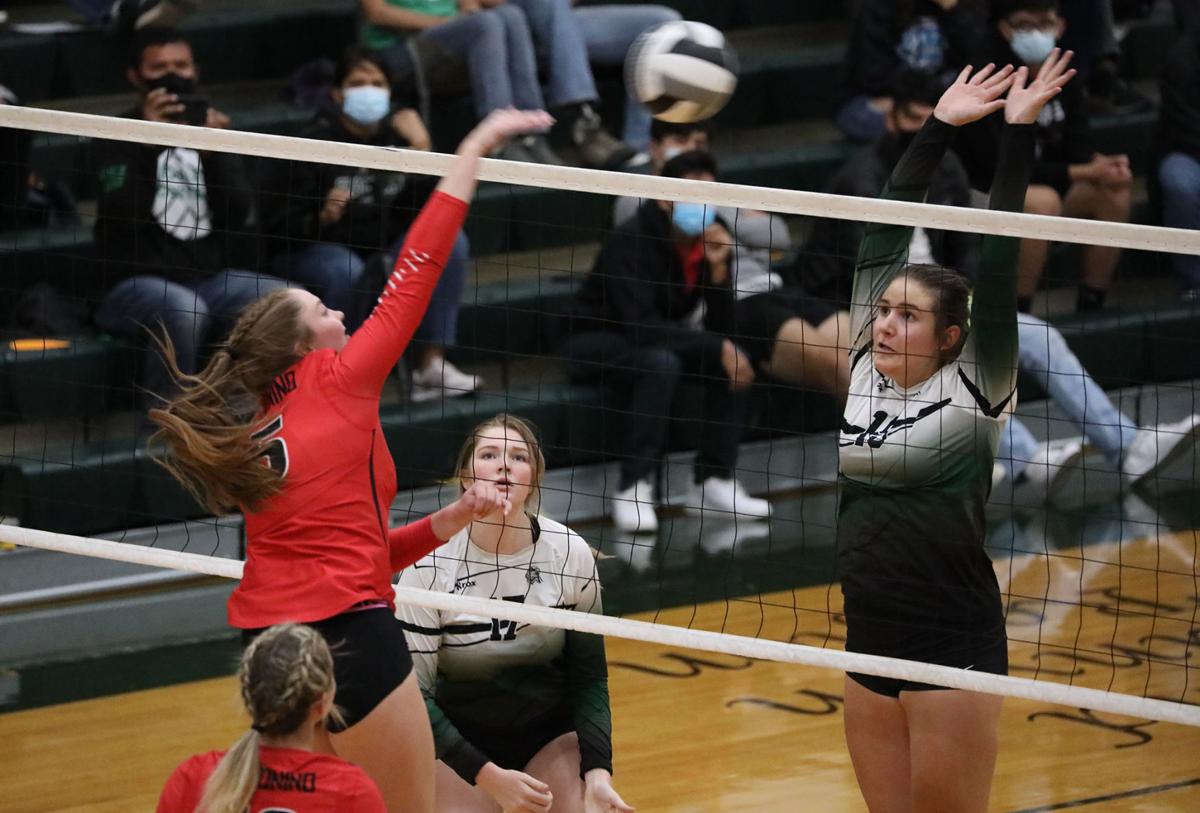 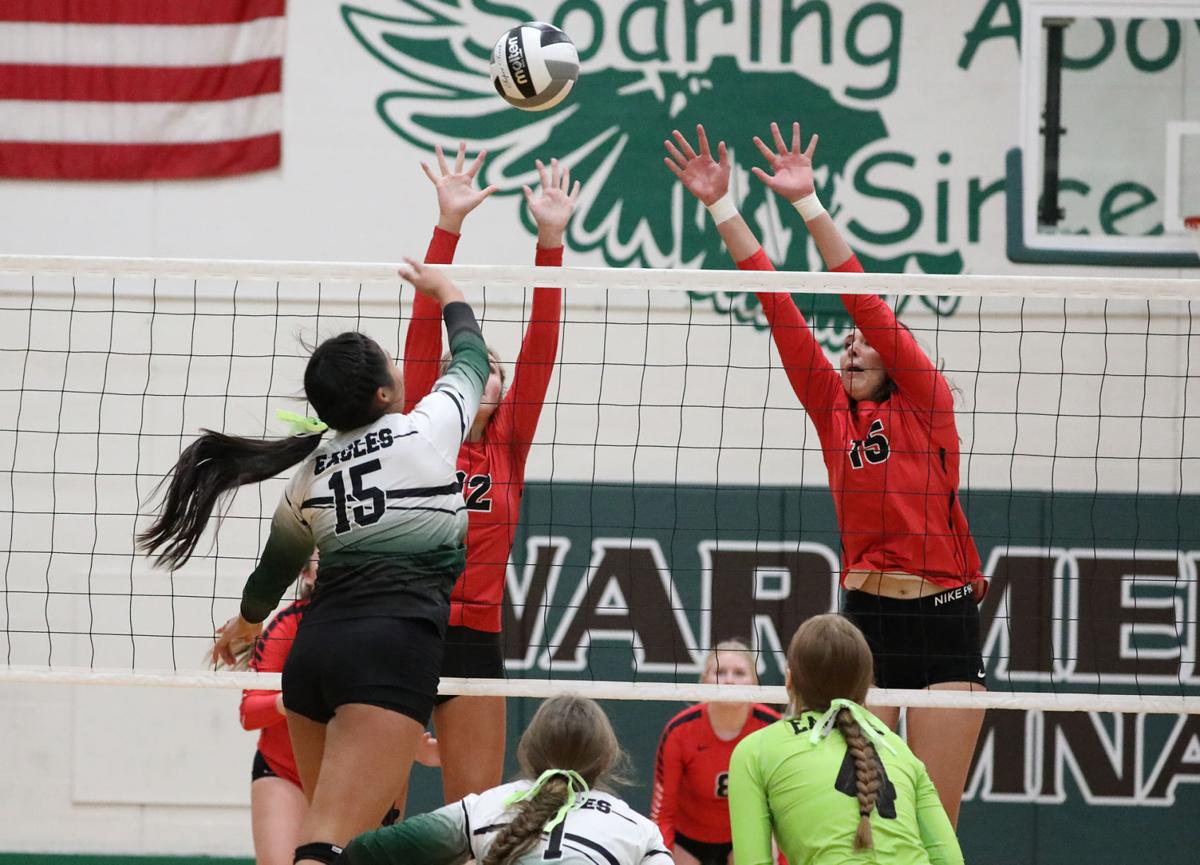 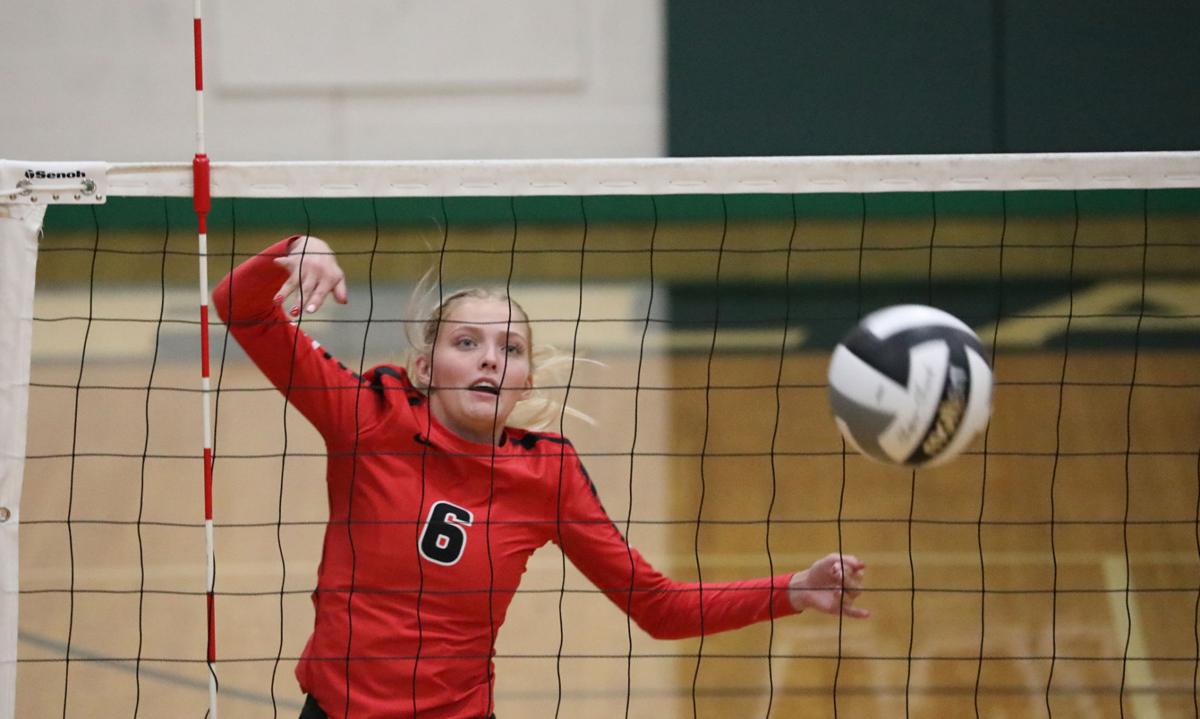 Coconino’s Megan Hicks (6) watches as the ball she just spiked against Flagstaff sinks on the other side of the net Tuesday night during a match a Flagstaff High School. 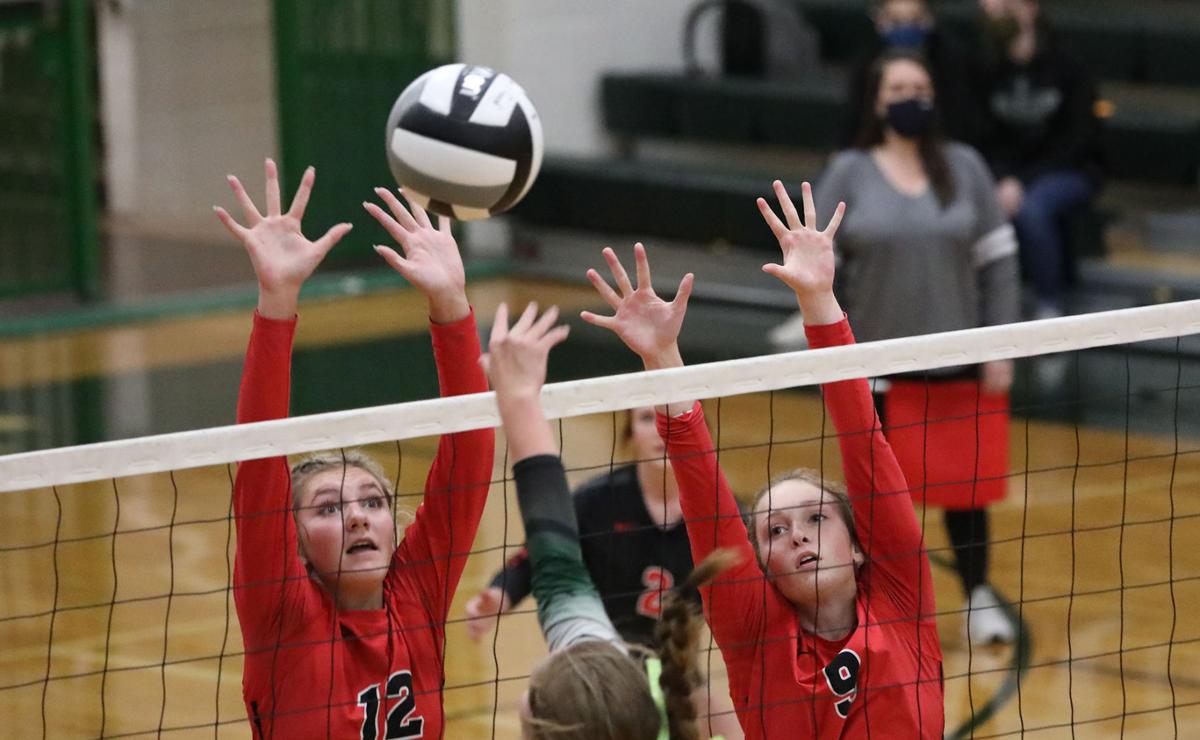 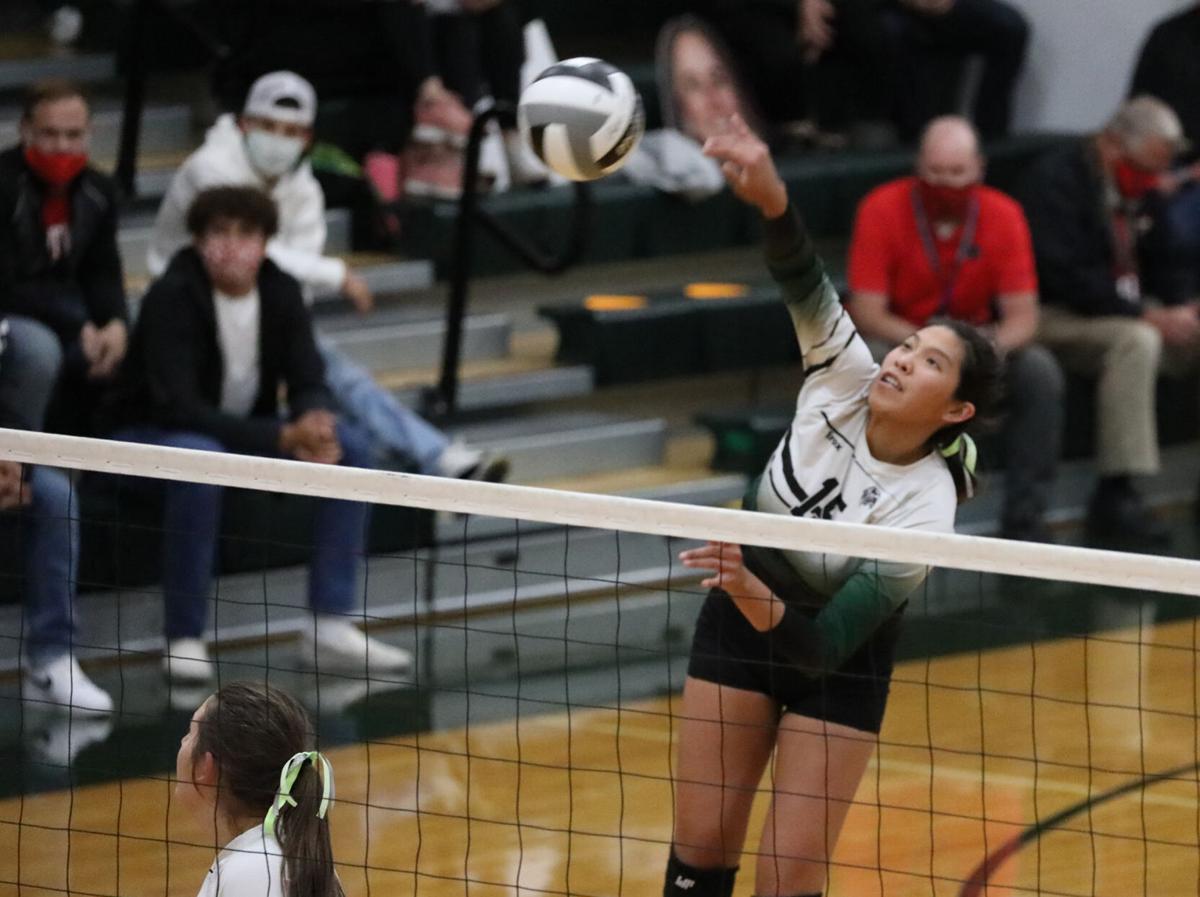 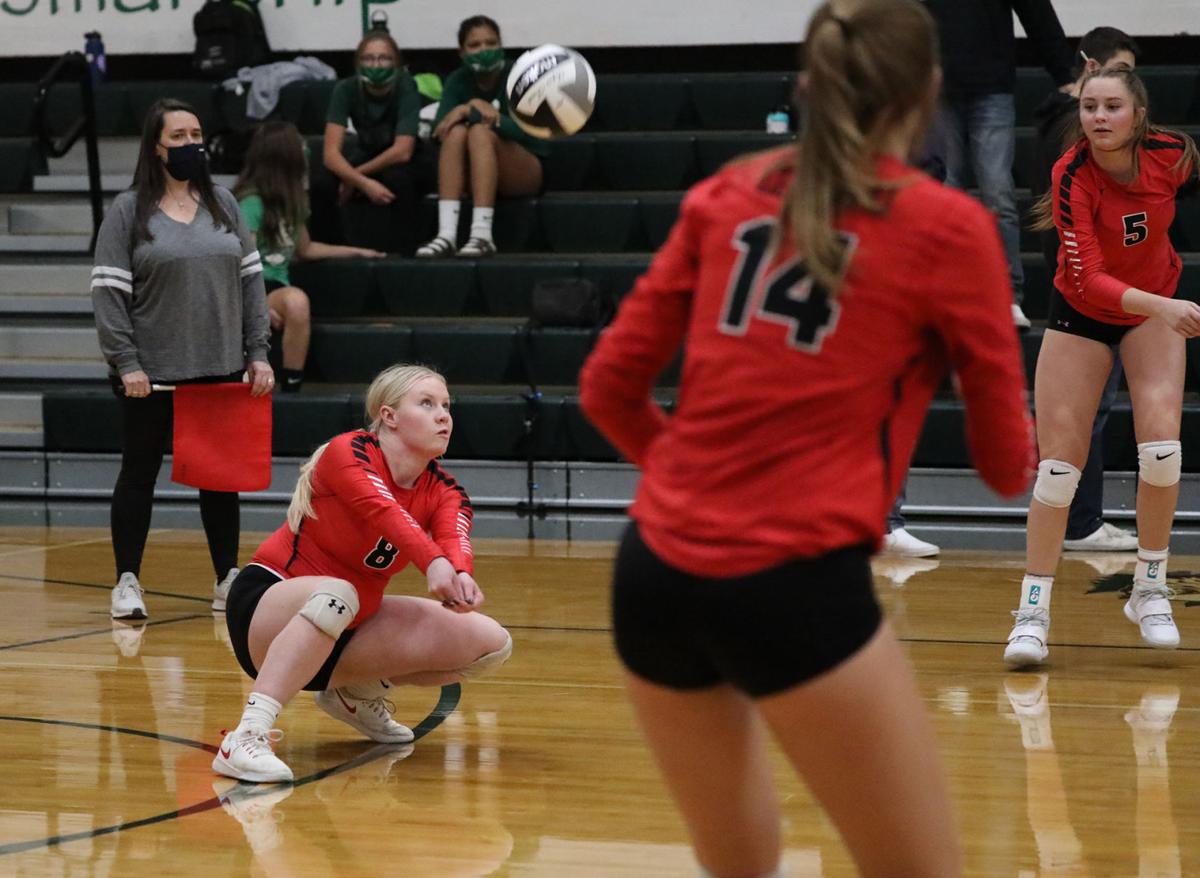 Coconino’s Maggy Popham (8) digs the ball to keep it in play against Flagstaff Tuesday night in the War Memorial Gymnasium at Flagstaff High School.

The visiting Panthers, still getting back into the swing of matches since their two-week pause, came into the No. 11 Eagles' home court and handed the hosts a 25-23, 25-22, 25-19 sweep. Coconino took its second straight win over Flagstaff dating back to last season's regular-season finale where Coconino won in five sets at home.

The 22nd-ranked Panthers played their fifth match since Thursday due to the rescheduled matches caused by the COVID-related hiatus, and without having really any time to practice, the team is working on things on the fly as it gets back to a groove.

"We feel so good, that was awesome," Panthers head coach Serena Wallace said of the sweep. "This year has been tricky and has thrown so much at us. These girls are just taking with grace and we just gave it right back. ... Without practice it's been a bit of a struggle because you can't fix, you gotta just be on the spot and change things on the spot. We came together before the game and worked some things out, the kinks that we could, and it worked and they were connecting.

"I think that as a coach you want it to be about the team," Wallace added. "This kind of provides us the opportunity to allow the team to step in and be a team. Come together on the court and get work done."

Wallace also praised her players, and their families, for the way they have responded to the delay to the start of the year and the subsequent pause and ensuing changes to the team's schedule.

"Thank goodness for their parents because they have raised some really great girls," Wallace said. "We just come together every day like it's our last day that we are going to play. That's been our motto because it is very real for us."

RiKenna Curtis was massive for the Panthers with timely kills and well-placed tips when her team needed to stop a potential Flagstaff comeback. In the opening set Curtis nearly put down a kill to end it, but Flagstaff recovered to put the ball into play only for Emma Thom to recover and block a Flagstaff hit to win the set.

Curtis again made a massive play in the second set. Flagstaff was rallying and had come back from an early deficit to tie the second at 20-all. A few plays later with the Panthers up 23-22, Curtis got her hands on a Gracelyn Nez attack to set up match point, where Thom put down the winning point.

While the opening two stanzas were close with near comebacks by Flagstaff, the third was a bit different. It was just all Coconino.

The Panthers jumped out to a 19-10 lead behind a 9-2 run to put themselves up comfortably.

On the other side, Flagstaff has now lost two of its last three matches -- both losses being sweeps.

Flagstaff had more issues passing, an issue for the team lately, and just seemed off its game for most of the night Tuesday. Much like the Panthers, the Eagles have had their own issues with scarce practice time.

A lack of time on the court outside of matches has hindered the Eagles since the team has had so much missed time from key players. The Eagles are at full strength numbers-wise, but there is still something missing.

Eagles head coach Beth Haglin said her team needs to find a fire, or spark, to get back on track.

"We need to find that team that was inspiring and wanted to work hard and wanted to be successful -- whether it was a win or a loss they needed to play hard," Haglin said. "I feel like there were miscommunications going on out there and staring at balls hitting the ground, and I'm trying to find six or seven players who want to work hard out there. We're not meshing as a team."

Some of those miscommunications and just-missed chances were in big moments, too, often sparking a Coconino run or derailing a Flagstaff rally.

Knowing that, Haglin gave credit to Wallace and Coconino for the win.

"The bottom line is we got outplayed tonight," Haglin said. "We didn't play well and they did. ... When they got out there it looked like they were scared, it was weird. Just a weird vibe, so hopefully we can get that funk out."

Coconino’s Megan Hicks (6) watches as the ball she just spiked against Flagstaff sinks on the other side of the net Tuesday night during a match a Flagstaff High School.

Coconino’s Maggy Popham (8) digs the ball to keep it in play against Flagstaff Tuesday night in the War Memorial Gymnasium at Flagstaff High School.